Our bailiwick here at We Are The Mutants is the often weird pop culture of the Cold War period. From our perspective, “Energy Warning,” the eleventh track on Scottish electronic music duo Boards of Canada’s landmark 2002 LP Geogaddi, is an artifact of a future time. But Boards of Canada’s own artistic and indeed ontological territory is the lost, forgotten, and abandoned—in the forms of the unique musical instrumentation, media, and culture of the 1960s through the 1980s. Their music explores haunted, poisoned nostalgia that’s been warped and rechanneled through contemporary thought, memory, and metatextual analysis. “Energy Warning” is rightfully considered one of Boards of Canada’s minor tracks; the band’s early LPs contain many of these sub-two minute “interstitials,” which usually take the form of atmospheric samples from old media. The choice of sampled material for “Energy Warning,” however, is quite significant given the historical context of the Geogaddi LP’s release: the childhood memories and psychology of the members of the band, and ultimately our place in the 2010s as we consider a future on a planet where self-regulating climatic systems have been ravaged by the Anthropocene.

Boards of Canada’s name came from a shared love for the works of the National Film Board of Canada, which brothers Mike Sandison and Marcus Eoin (born Marcus Eoin Sandison) watched during their time living in Calgary in the late 1970s. The brothers, who were born in and spent most of their formative years in Scotland, also played music from an early age, and made home movies inspired by their childhood exposure to educational films and nature documentaries. From its very beginning, Boards of Canada’s raison d’être was found in recycling half-remembered media from childhood to make something new. 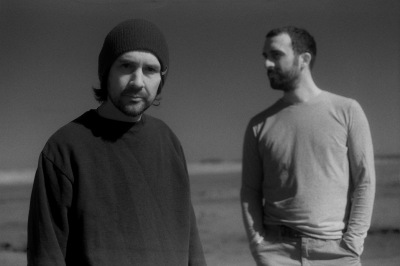 Sandison and Eoin began their career hosting live, multimedia “happenings” in the late ‘80s and early ‘90s. Most of the “old tunes” recorded during this period were collected on a pair of rare mix tapes, A Few Old Tunes and Old Tunes Vol. 2 (recorded between 1985 and 1996, leaked to the internet starting in 2009). These early recordings were, in a way, proto-vaporwave; they pointed the way to more contemporary electronic music by repurposing television commercials, soul hits of the 1980s, game show clips, and other pop culture detritus. Boards of Canada’s early work was on the forefront of the ambient and “intelligent” dance music movements, and nearly twenty years later, the band’s influence could be heard in the early, pseudonymous works of artists like Oneohtrix Point Never and Vektroid. Boards of Canada’s innovations have proven to be a bridge between two generations of electronic music artists.

Their debut LP, Music Has the Right to Children, released in 1998 and critically lauded by the indie music press, mined childhood nostalgia to great effect. Samples from Sesame Street, song titles inspired by the aforementioned National Film Board of Canada, and cover art that reflected the sun-dappled yet warped Polaroid memories of the Sandison brothers all reinforced this creative process of mining one’s childhood for the half-remembered. But it was on their next LP that these childhood memories would begin to evoke an altogether more mysterious, sinister, even eerily apocalyptic aesthetic.

Geogaddi introduced and accentuated newer and darker elements to the Boards of Canada oeuvre, such as backmasking, excerpts from numbers stations recordings, and references to and audio samples from the Branch Davidian cult. In the midst of this uncanny material, though, were yet more references to the filmstrips and educational programs of the Sandisons’ youth. One of these tracks, “Dandelion,” presents narration by Leslie Nielsen from a 1980 National Geographic documentary called “Dive to the Edge of Creation” (the same year Nielsen delivered his breakout comedy performance in Airplane!). Immediately following the tenth track, “1969,” which features the previously-mentioned references to the Branch Davidians, the Sandison brothers present “Energy Warning.”

The 35-second track features a voice-over from a public service announcement over a weird gurgling sound and yet another backwards melody. The titular sample goes as follows:

Energy is becoming one of our country’s greatest concerns; if we don’t start working on energy conservation there may not be enough energy to go around by the time I’m a parent. We’re going to learn about how we can solve some of our problems through alternative energy sources. You can learn more about energy too; call your county Cooperative Extension Service for more information. Conserving energy is everyone’s responsibility. Call 4-H to find out how you can do your part.

There is a lot to break down here. Happily, the sourcing for this sample has already been done by dedicated Boards of Canada fans. It comes from a 1979 public service advertisement (the original version has been preserved on this site; scroll to the bottom of the page for it and other 1970s PSAs) produced by the agriculture-focused youth organization 4-H. 4-H originally formed from manifold youth groups in late 19th-century America, and especially from organizations and clubs that encouraged youth innovation in agricultural techniques. First appearing as a distinct national organization in 1914, 4-H was sponsored by the same Cooperative Extension Service (a division of the U.S. Department of Agriculture formed to help land-grant universities) named in the sample from “Energy Warning.” Both 4-H and the Cooperative Extension Service were meant to bolster agricultural education and innovation from grade school through the university level in the United States, and 4-H clubs soon became a vital social network for farm-working adolescents within rural communities.

By 1979, as you might imagine, the 4-H club’s original mission statement might have looked a little long in the tooth. But the 1970s saw 4-H diversify its approach, using mass media for outreach and turning to agriculture-adjacent topics in order to remain relevant. In 1972, 4-H had released Mulligan Stew, an educational series on nutrition that, with production help from Michigan State University (itself the nation’s first land-grant university) had become a popular series on both over-the-air television and presented on film in schools. In 1979, though, a new set of issues had surfaced, much more urgent than following the USDA’s familiar-to-1970s-American-kids diktats about the four food groups: the second 1970s energy crisis.

As President Jimmy Carter’s first term neared its close, the Iranian Revolution produced an unexpected spike in oil prices, which sent American drivers and consumers back to the long lines and rationing of the earlier oil crisis in 1973. Moreover, the ecology movement had made great leaps and bounds since 1973, and awareness of the necessity for longer-term solutions to solve the fossil fuel crisis was well-formed in the public mind. The National Speed Limit of 55 miles per hour (introduced in 1973 by President Nixon during the first oil crisis) and Carter’s 1977 speech on energy conservation (and subsequent setting of energy standards for federal buildings) had become familiar to American consumers by the time the 1979 crisis hit. But American patterns of consumption had not appreciably changed in the intervening six years between crises. In the midst of this maelstrom of confusion, with adult consumers reluctant to learn new ways of living, American educational authorities presented programs and public service campaigns meant to inculcate energy awareness in the young, who might yet be convinced to make real changes in their soon-to-be fossil fuel-consuming lifestyles.

And so we return to Boards of Canada’s use of this rather poignant artifact of a time when it was believed that immediacy and urgency were needed to solve a seemingly intractable problem. Boards of Canada’s later works, especially their 2013 LP Tomorrow’s Harvest, return continuously to themes of environmental and societal collapse. The roots of this concern are found a decade earlier in their ironic, haunting evocation of the very early warning signs of this ecological disaster as expressed in “Energy Warning” and the PSA at its center.

It’s conspicuous and important that Boards of Canada titled the piece “Energy Warning.” The word “warning” appears nowhere in the original 4-H PSA. That’s the Sandisons’ gloss on this text, their own interpretation. The Sandisons themselves have cloaked their origins in mystery, not even revealing that they were in fact siblings until a 2005 interview with Pitchfork. Given that their parents moved them around due to being in “construction,” and that they grew up in Scotland and Alberta, both centers for the international petroleum industry, are they attempting, through “Energy Warning,” to exorcise guilt about one or both of their parents being involved in petroleum? Was the mystery of their origins less an artistic pose and more an expression of internalized guilt? This is all speculation, naturally, but I wonder.

The 4-H PSA, then, a seemingly disposable artifact of 1970s mass media aimed at youth culture, becomes through the Sandisons’ repurposing the Cassandra it should have been, a warning shouted out to the void, an attempt to engage the future Generation X before it was too late for the Earth, before they themselves became parents. (Michael Sandison has said that the aura of catastrophe inherent in Tomorrow’s Harvest is indeed a reaction to his own incipient parenthood and the fear he has for his children’s future.) Generation X became parents to a millennial generation that inherited the same looming catastrophe. Fossil fuels are still with us, and global warming (which wasn’t even a known concern for most citizens in 1979, even as energy giants like Exxon knew about the reality as early as 1977) is now a recognized and existential threat. What initially seems like a quaint, earnest artifact of Generation X’s youth is actually more sinister than any evocation of cults, Satanism, numbers stations, or any of the other inchoate fears that listeners of Geogaddi cited. The demon that is summoned by Boards of Canada on “Energy Warning” is one of humanity’s own making, and, in some way, we’ve known about it since we were kids.

15 thoughts on ““By the Time I’m a Parent”: The Poignant Prophecy of Boards of Canada’s “Energy Warning””