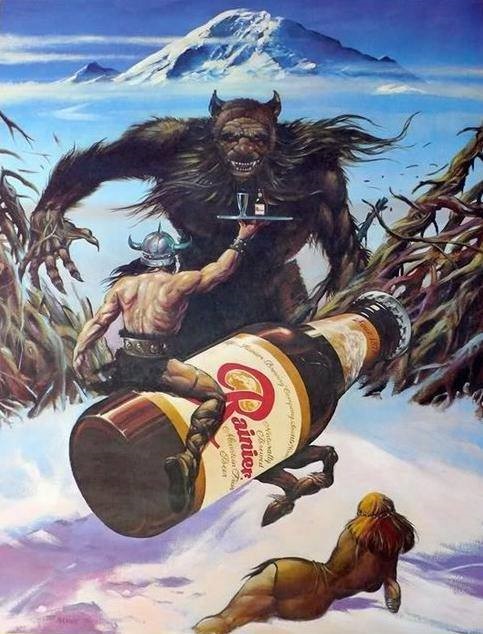 This 1976 promotional poster for Rainer beer, entitled “Barbeerian [sic] conquers Sasquatch” and showing a muscular warrior serving the mythical creature the beverage, demonstrates that high fantasy and cryptozoological tropes had penetrated the popular culture of the second half of the 20th century to such an extent that they could be reliably mined for mainstream parody. Clearly tipping its hat to famed genre artist Frank Frazetta, the illustration was by William Stout, himself a respected artist and designer best known for his paleoart and his concept and production design work on films like Ralph Bakshi’s Wizards (1977), Conan the Barbarian (1982), and The Return of the Living Dead (1985). The caption beneath the illustration reads: “Proving once again that Mountain Fresh hath charms to sooth the savage thirst.” Seattle’s Rainier Brewing Company, active from 1878 to 1999, was famed locally for its inventive, tongue-in-cheek television advertisements, which often exploited contemporary crazes such as video games and Star Wars. The peak in the background is, naturally, Mount Rainier, which gave the brewery its name, and which, according to the U.S. Geological Survey, “is one of [America’s] most dangerous volcanoes.”

One thought on “Rainier Beer Advertisement, 1976”