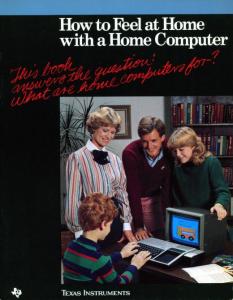 How to Feel at Home with a Home Computer, Texas Instruments, 1983 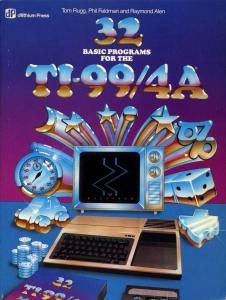 Texas Instruments (TI), which had pioneered both pocket calculators and speech synthesizer technology in the 1970s, released its TI-99/4A home computer in 1981. After the release of its first personal computer, 1979’s TI-99/4—a fairly substantial commercial disaster—TI went back to the drawing board to produce a home computer that was cheaper, easier to use, had better graphics, and most important had room for expansion through the addition of after-market peripherals. The TI-99/4A’s success was modest in an early-’80s field crowded with competitors, but its community of users was loyal and dedicated. The lack of platform compatibility of commercially available programs and the cost of the average home computer in the early ’80s ended up inspiring a powerful sense of brand loyalty, akin to the “console wars” among video game platforms in the late ’80s and beyond. A TRS-80, Commodore, Apple II, or TI-99/4A was a major investment for the average American family.

In the short golden age between the TI-99/4A’s release in 1981 and the video game and home computer crash of 1983, this TI community could purchase a wide array of books offering reviews of TI-99/4A retail cartridges, printed programs for users to manually enter into their computer, and instructions on how to program in BASIC, LOGO, and even TI’s assembly language. The collection of TI books seen above runs the gamut between official Texas Instruments publications and third-party DIY manuals. As some of the promotional images demonstrate, the TI was positioned as a good educational computer for K-8 children—in the early ’80s, BASIC and LOGO programming classes were beginning to trickle into schools.

But there was also a growing networked community of local user groups that would write and trade programs on audiocassette or in the pages of mail-circulated user group ‘zines. During the TI-99/4A’s short retail sales lifespan, these user groups existed in parallel to commercial software developers, but it was only after the TI-99/4A’s de facto retirement in the mid-to-late ’80s that the community became indispensable to the TI stalwart. Not only did these groups continue to pioneer software for the TI, but they offered innovative uses and modifications for the hardware, collected from dozens of separate local user groups. In the Chicago user group’s “Hardware Reprints” collection from 1987, “99ers” from all over North America contributed their hacks and tweaks, keeping the TI competitive performance-wise with the rising tide of IBM PC clones. And in the LA User Group’s 1987 “Kracker Facts,” myriad users show off uses for the “Gram Kracker” box (1985) that allowed TI users to make adjustments to the specs of both the solid-state TI cartridges and the TI’s internal specs.