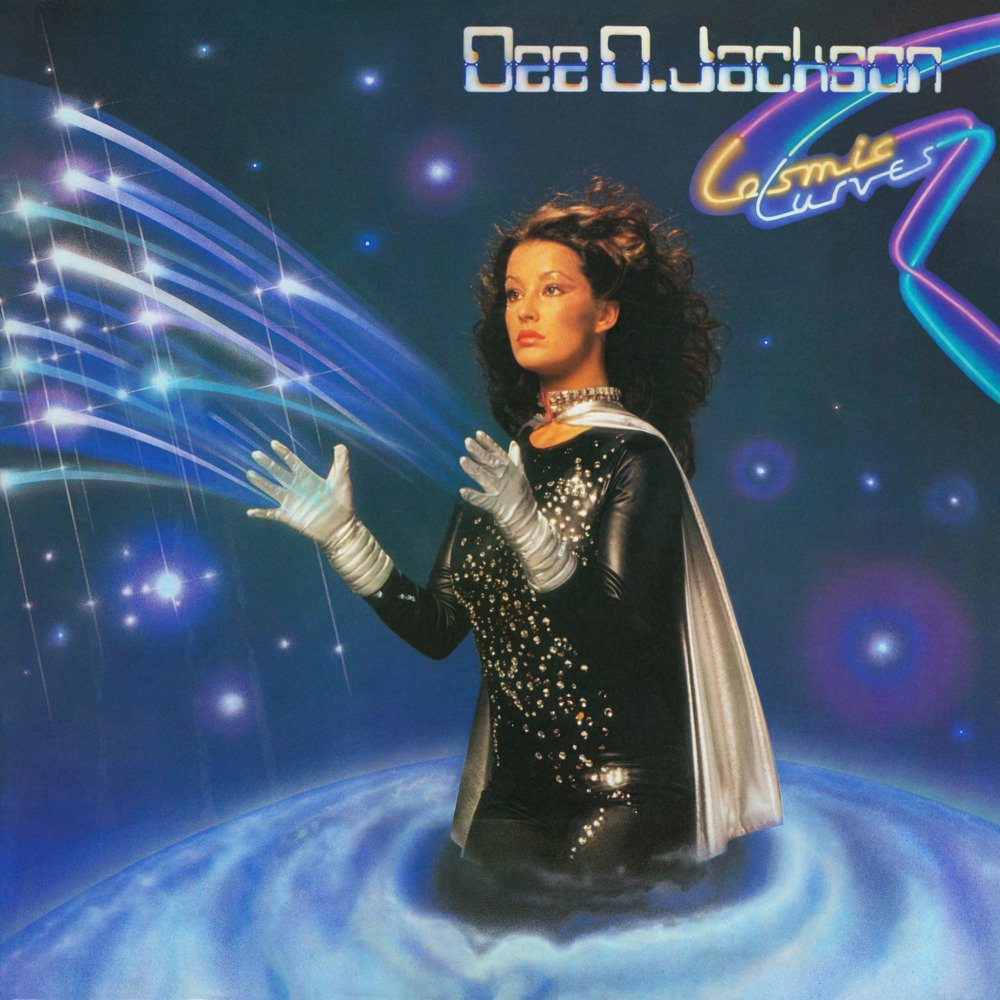 In 1978, the stars were right. The previous year, the strange confluence of the artistic, political, esoteric, and scientific culture (and counterculture) that had been building up for over a decade was exploded by one George Lucas, who punctured a hole through the zeitgeist big enough to allow all manner of cosmic currents to flood through. It was astride one of these that Deirdre Elaine Cozier—a young British musician who, after formative years spent listening to King Crimson, Pink Floyd, Joni Mitchell, Cole Porter, and musicals like West Side Story—had moved to Germany and reinvented herself as sensual astronaut of the spaceways Dee D. Jackson. And, for a brief period, she ruled the aether.

The country’s history of mass-produced pop music and conceptual formal rigor in the arts had made ’70s Germany a fecund breeding ground for electronic invention, from the elegiac formalism of Frankfurt’s Kraftwerk to Berlin’s psychonauts Tangerine Dream. Munich was another hive of futurism, home to an international colony of musicians that included Giorgio Moroder—whose origins lay in both rock and roll and the dance clubs of the Black Forest—all of whom were intent on creating a new type of popular music defined by gleaming, pulsing anthems to love and pleasure.

Deciding that Munich seemed like a good place for a fresh start, Jackson—the daughter of a singer mother and French jazz pianist father—had moved there from her hometown of Oxford. Speaking to We Are the Mutants, Jackson said Munich was “a very cosmopolitan city and great energy was flowing at that time.” As she had arrived via a different route from many of the jobbing musicians working there, she “brought a little British fresh air” with her, and it was while she was singing in clubs, accompanying herself on guitar, that she met Gary Unwin and his wife Patty. 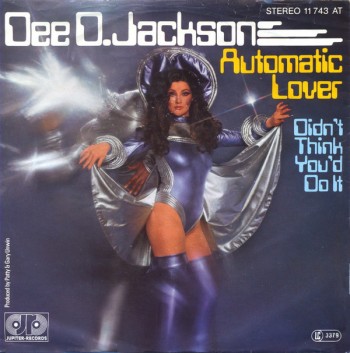 Born in Sheffield, Unwin was a bass player who, thanks to friends made during a period in the late ’60s gigging with rock band The Hi-fi’s in Germany, had ended up moving to the country and becoming a full-time session musician. From 1970 on, together with Keith Forsey (Giorgio Moroder’s drummer, who went on to produce Billy Idol’s first LPs and co-write “Flashdance… What a Feeling”), he formed an expat rhythm section that worked with names like Donna Summer, Boney M., Amanda Lear, Silver Convention, and Moroder himself, and played on many of the best-known recordings of the hugely influential local disco idiom that became known as the “Munich Sound.”

For Jackson, writing songs was “almost a form of self analysis, a way to exorcise growing pains and [create] a secret warm safe place through the process.” She and the Unwins recorded a song together, 1978’s lush but unremarkable “Man of a Man,” and when the single didn’t perform as well as hoped, they immediately began work on another. It was this song, “Automatic Lover,” that would ignite the concept of the same year’s Cosmic Curves LP.

“Automatic Lover” was released by prolific Munich pop label Jupiter Records in 1978. With its propulsive electronic throb, dramatic vocals, and plaintive “See me, feel me, hear me, love me, touch me” refrain, it was a huge hit around the world, reaching number four in the British music charts and entering the top ten in Germany, Switzerland, Norway, Sweden, and Italy. The song was so popular in Brazil, where it was featured in the soundtrack of the popular, Disco-inspired telenovela Dancin’ Days (1978-1979), that Brazilian dancer and actress Regina Shakti began appearing on TV shows and in concert as “Gee G. Jackson” to capitalize on its success.

“My dream was actually to star in musicals,” says Jackson, “so I guess the drama in Cosmic Curves is coming from there.” This love of musicals was evident in her live appearances, in which she was often accompanied by her robot costar from the song’s promo video and where—clad in the memorably figure-hugging space-age costumes created by Munich fashion designer Marc Mano—she performed the song as though it were a piece of theater.

“Automatic Lover” spent nine weeks in the UK charts and led to Dee D. appearing on what was then Britain’s principal pop music program, Top of the Pops, in April of 1978. At the time, the show—thirty minutes long and broadcast at seven o’clock every Thursday evening—could command an audience of around 15 million viewers, and was an intimidating institution in the singer’s home country. “[It was] quite shocking,” she said. “I was so nervous that I kept locking myself in the bathroom with my back flat to the door! I didn’t want anyone from my team to see me falling apart like that—it was my first ever TV show.” Introduced by DJ Tony Blackburn (who had made the track his record of the week on his BBC1 radio show), Jackson performed as part of a weekly line-up that included Alan Price, Bonnie Tyler, Johnny Mathis and Deniece Williams, Genesis, and Dr. Hook. 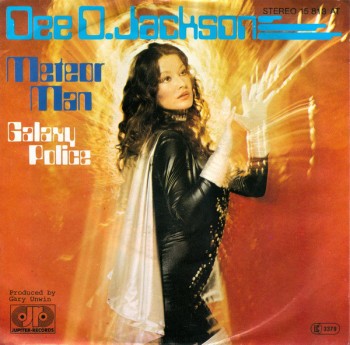 The album Cosmic Curves, which Jackson calls a “rock, electronic, space musical,” was, in Jackson’s words, “a combination of the writers with a passion for story-telling and my love of dressing up in theatrical clothing.” Perhaps it was this willingness to invest so totally in what could have been just another piece of throwaway sci-fi fluff that gives the record its unexpectedly intense and evocative mood. According to Jackson, the process of creating the LP, which was written in a small Bavarian town called Schöngeising, was as enjoyable as it was odd. “I actually gave my first concert in the living room of my producer’s home for the villagers before I took it on tour, which was rather intimidating and amusing.”

Once the songs were ready, Unwin and Forsey were joined in the studio by an international team of musicians that included guitarist Mats Björklund, late of ‘60s Swedish sci-fi-styled surf band the Spotnicks (known for, among other songs, “The Rocket Man“) and now part of the Munich dance scene; Kristian Schultze on keyboards and synthesizer; and drums by Martin Harrison, who had worked on Donna Summer’s foundational Love To Love You Baby (1975).

The completed record was astonishing. Discussion of the cultural repercussions of the Star Wars phenomenon on popular culture tends to focus on the derivative cash-ins that began to vomit forth immediately after its release, but the power of sci-fi tropes as a liberating new paradigm within which artists could express themselves has perhaps been overlooked. That was certainly the case with Cosmic Curves. Over the superstructure of Unwin’s slick clubbing production skills, Jackson wove together her love of folk, prog, and musical narrative to create a kosmische-disco Bildungsroman: equal parts terrestrial melancholy and astral bliss, and so memorable that it continues to resonate long after so much of the short-lived but prolific space disco genre has faded into a generic blur.

The strange grammars of the album’s lyrics only make them more beguilingly alien, and instead of sounding repetitive, the four-on-the-floor beats throb with the power of a galactic thruster. The real driving force of Cosmic Curves, however, is Jackson’s voice: by turns slick and natural, professional and vulnerable, it weaves the album’s concept together into a seamless whole inhabited by two personalities—one with an inflected, emotive, and decidedly modern voice, the other whose cut-glass pronunciation is archaic- and spiritual-sounding. It’s a powerful and beautiful contrast that lends the record’s vocals rare emotional heft, even in a setting where a false step could easily render the whole thing silly. 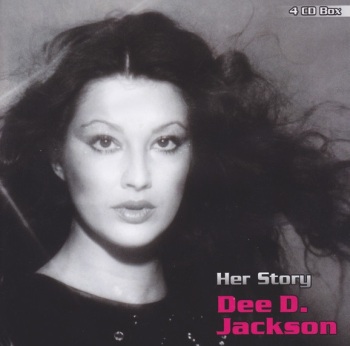 Jackson’s Her Story (Express Your Soul, 2015) collects all three of her LPs and the complete remixes

Jackson says that the album is “very autobiographical,” and one interpretation of the narrative might be that it’s about a young woman who, struggling with her emotionally distant lover (“Automatic Lover”), runs away (“Red Flight“) to indulge her curiosity (“Galaxy Of Love” and the wonderful “Meteor Man“), attempting to come to terms with her own sexual nature (“Venus, The Goddess Of Love“) and battling not to be imprisoned (“Galaxy Police“)—read defined by and judged on her sexual and emotional history—by moralistic arbitrators (“Cosmic Curves“) before finally gaining her freedom—which, on the beautiful “Falling Into Space,” she admits can also be confusing and troubling.

Although it’s tempting to see the LP through the facile goggles of kitsch—a perspective from which, in any case, it delivers in gratifying skip-loads—it would be a mistake to think of it as nothing more than a bit of one-dimensional, opportunistic fluff: Cosmic Curves is a perfect pop record, a rousing concept album about personal growth and catharsis written in a time of immense optimism and opportunity, as well as a time of great confusion about what the future was actually going to hold—for the human race and, on a smaller scale, for the individual. Wide-eyed, self-aware, and joyous, rather than using its conceit as camouflage, Cosmic Curves adopts it as the perfect way of communicating emotional candor without becoming suffocated by earnestness: freed from the context of terra firma, the flights of emotional fancy are rendered all the more affecting.

Jackson’s next release was the excellent Thunder and Lightning in 1980. After a brief sojourn in Los Angeles, she relocated to Italy, where she put aside the SF stylings and released the singles “Talk Me Down” (1981), “Shotgun” (1982), “Moonlight Starlight” (1984), “Sweet Carillon” (1984), and “Heat of the Night” (1985). In 1995, she released Blame It on the Rain (for a sample of her songwriting chops, listen to the title track), and she continues to write music today.

If an unexpected visit from the Galaxy Police forced Dee D. to flee Earth in a hurry, she says that she would take with her copies of Joni Mitchell’s Hejira, Stephen Bishop’s Careless, Supertramp’s Breakfast in America, Siddhartha by Hermann Hesse, Wuthering Heights by Emily Bronte, and Leonardo da Vinci’s The Last Supper—a selection that provides a pretty accurate précis of what Cosmic Curves is: a compelling, adorable fusion of slick, danceable pop, auteur ambitions, gothic melodrama, glam, existential doubt, and a broad canvass of human frailty, endurance, and adventure, dusted with cosmic glitter and lit by the flashing of laser beams.