From the Foreword of the Fiend Folio, Don Turnbull explains the origins of the included monsters without mentioning White Dwarf magazine directly 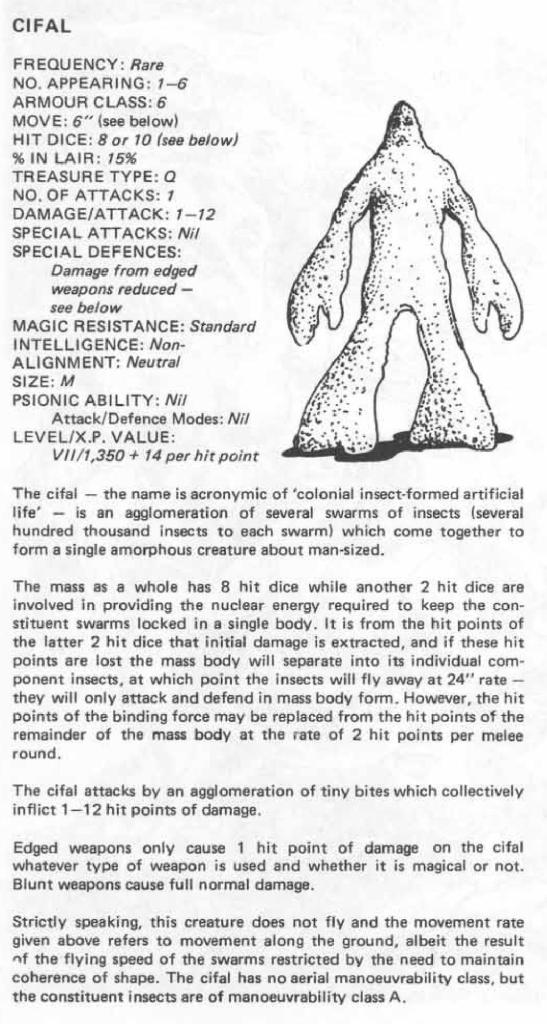 The “cifal,” one of many amorphous monsters found in the Fiend Folio 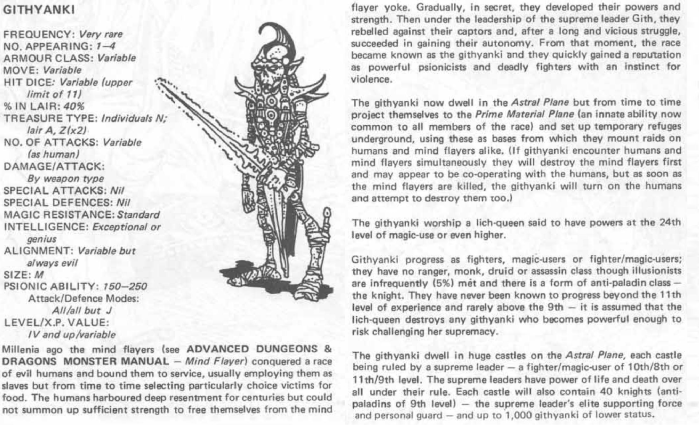 The backstories for these unique homebrew monsters often take cues from those in the Monster Manual, like the magnesium spirit’s origins as a failed summoning

One of several undead creatures in the Fiend Folio, the Son of Kyuss. This creature was the inspiration for the band name of “desert rock” pioneers Kyuss 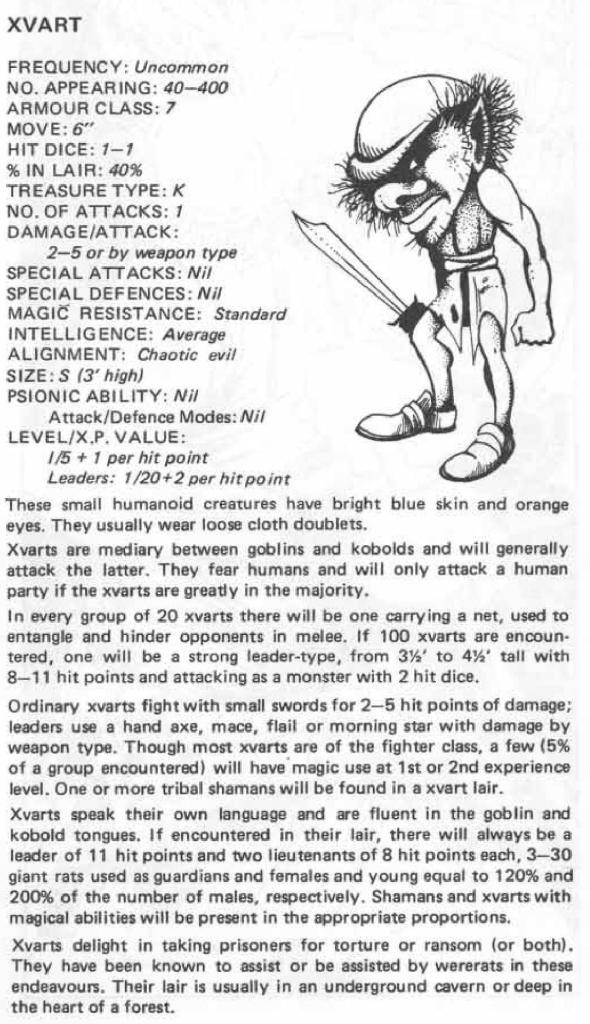 The xvart, a blue-skinned humanoid “mediary between goblins and kobolds.” This creation would later be folded officially into Gary Gygax’s own Greyhawk setting, in the form of the xvarts’ god Raxivort

By the early 1980s, TSR‘s Dungeons & Dragons had fully taken over the rec rooms and breakfast nooks of North America. The release of the three Advanced Dungeons & Dragons rulebooks between 1977 and 1979, along with a number of AD&D adventure modules, codified optional and advanced rules that had been growing throughout the mid-1970s. In Britain, the invasion of TSR’s flagship game was happening on a slightly more modest, yet no less intense (in terms of fan devotion), scale. The games were imported and licensed in the UK through a company called Games Workshop (established in 1975). Their magazine, White Dwarf, began publishing in 1977 and, along with Games Workshop’s rapidly-growing brick-and-mortar stores, acted as a meeting-ground for British D&D enthusiasts. Early issues of White Dwarf contained articles about all sorts of role-playing games (RPGs) being developed in America. Games Workshop was also a catalyst and a venue for original British RPG content. One of these venues, the regular “Fiend Factory” column in White Dwarf, featured homebrew monsters from all kinds of campaigns being waged throughout Britain, and this rich vein of creativity was tapped by Don Turnbull at TSR UK (founded in 1980) for their first major publication, 1981’s Fiend Folio.

The entries in the Fiend Folio push against the boundaries of what kind of monsters could neatly fit into a medieval fantasy setting. Bizarre creatures like the magnesium spirit, the protein polymorph, and the cifal (“colonial insect-formed artificial life”) feel more like adversaries from contemporary science fiction RPG universes like Traveller or Gamma World. Meanwhile, real-life mythic creatures from obscure corners of British folklore, such as the “booka,” kelpie, and ettercap, rub shoulders with their rather more distant cousins like the kenku, the penanggalan, and a sampling of “oriental” dragons. In addition, monsters that had debuted in American AD&D modules released after 1977’s Monster Manual, such as the dark elves or “drow” (who’d recently debuted in the D-series of AD&D modules from 1978), appeared in the Fiend Folio. Future iconic AD&D creatures made their first appearances in White Dwarf‘s Fiend Factory, such as the exotic extraplanar githyanki, githzerai, and slaadi, and were republished in the Fiend Folio. This particular group of monsters had been submitted to the Fiend Factory column by future sci-fi author Charles Stross. The overall aesthetic effect of this mélange of monsters on an American gamer unfamiliar with White Dwarf made the Fiend Folio something like a tome that might have slipped through a portal from an alternate Earth version of Dungeons & Dragons, a Monster Manual filtered through a very strange and alien set of in-game expectations. In reality, of course, it was simply the D&D we played, a reflection of what gaming groups gathered in a dozen or so British sitting rooms were doing. Even given the wild and woolly state of 1st edition AD&D, the Fiend Folio had its detractors. A young Ed Greenwood (whose own homegrown fantasy world/campaign setting, the Forgotten Realms, would become D&D-official in a few years) famously took part in a point-counterpoint editorial with Don Turnbull in the pages of Dragon magazine in 1981 over the quality of the monsters within.

It’s this distributed, local aesthetic that made early Dungeons & Dragons such a unique experience. Long before the internet allowed for international fans of US-published RPGs to instantly chat about the latest releases, venues like White Dwarf and the Fiend Folio reflected back to the international RPG community the sorts of things local Dungeon Masters were up to in their DIY campaigns. Indeed, the history of tabletop role-playing games before the coming of the internet resembles nothing less than a “cargo cult,” as RPG theoretician Ron Edwards asserted back in 2003, paraphrasing an observation by We Are the Mutants contributor Rob MacDougall. The officially-published rulebooks and guidelines for running games, themselves often maddeningly vague and contradictory, were thus merely one influence on an array of individual gaming fiefdoms. Play styles and house rules evolved in isolation, with the exception of major events and conventions where sanctioned “tournament play” ruled. Before the release of the “Gold Box” computer games in the late 1980s, there were very few opportunities for players to see how the actual AD&D rules worked in practice. For a generation of tabletop gamers who have grown up with the ability to log onto the internet and watch a D&D campaign unfold live on video with thousands of other fans, the idea of not knowing the implicit, unwritten rules of play must seem deeply alien.

In my own personal experience, the Fiend Folio was one of the most legendary AD&D rulebooks in my own branch of the Dungeons & Dragons “cargo cult.” It went out of print soon after its publication in the early 1980s, and, a few years later, increasingly rare copies were going for $50 or more at conventions and on the used shelves of local gaming stores. For this reason, the Fiend Folio achieved the same rarified status in my junior high gaming group that a magical relic or artifact might. This tome, from the distant shores of Avalon, was full of mysterious creatures, some of which had never appeared in a single TSR book or module we had seen; and it was tantalizingly out of our reach. When I finally got my hands on a copy in high school (paying top dollar), it managed to retain that aura purely through the bizarre, unique monsters within. After checking out the nilbog or the adherer, I could imagine a TSR editor taking a look at one of my own weird homebrew monsters and publishing it in Dragon magazine or even a new Monstrous Compendium. The Fiend Folio and its catalog of “creatures malevolent and benign” held out the hope of giving back to a game that had given me so much during my adolescence. It was a tantalizing peek at what it would be like to somehow have the entire global D&D community participate in one of my own campaigns.