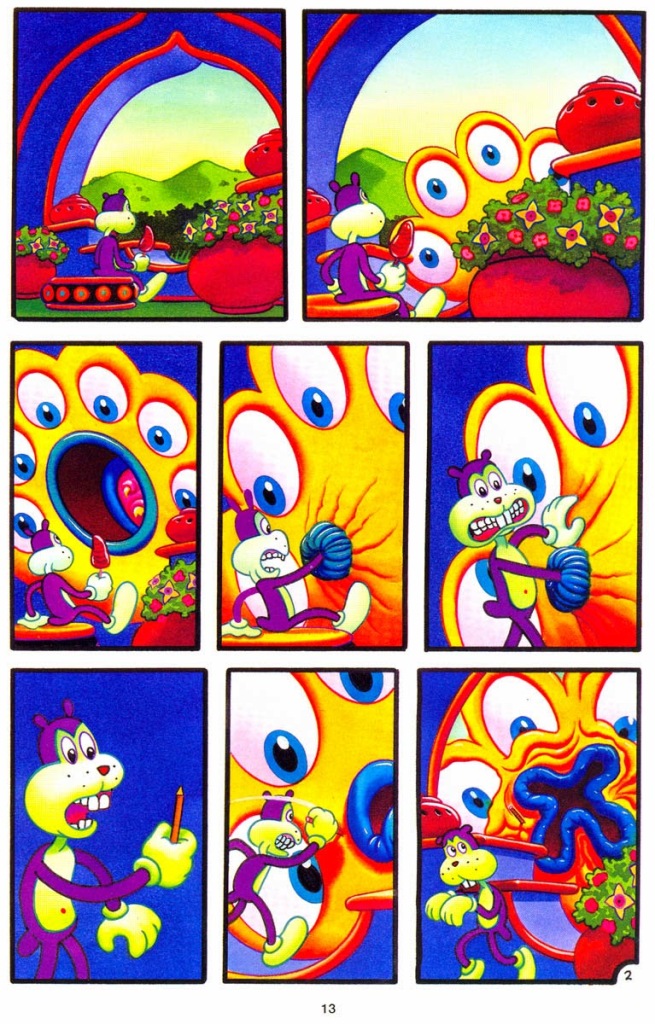 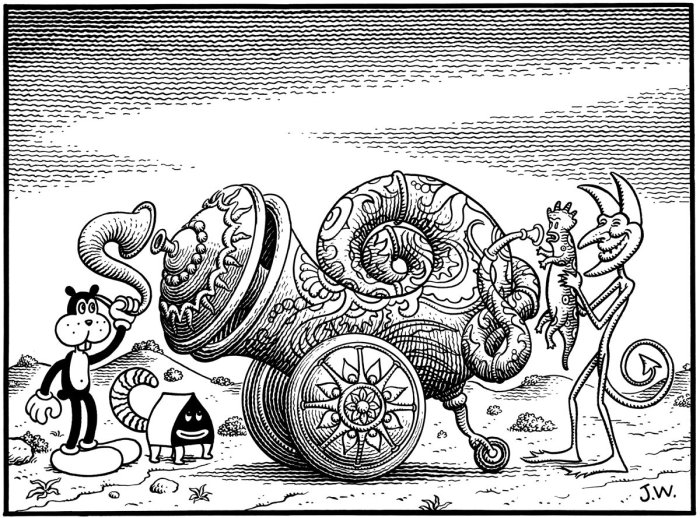 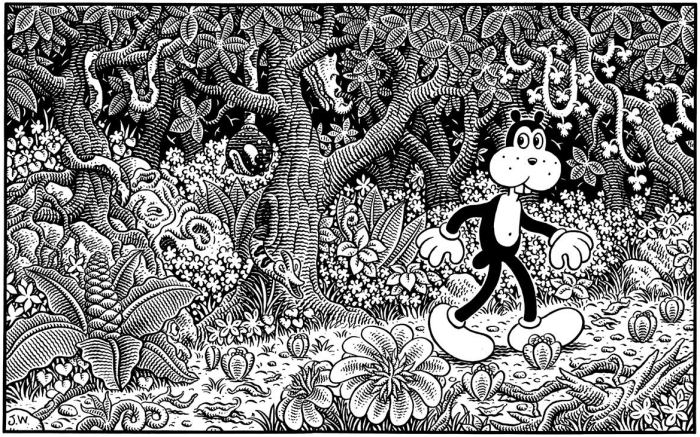 Set in a world called “the Unifactor,” Jim Woodring’s wordless Frank recounts the adventures of the title character—a gormless-looking, anthropomorphic, rabbit-like creature with a nature by turns passive and perverse—and his interactions with the Unifactor’s other inhabitants and the world’s beautiful and frightening flora and fauna, given to unpredictable reactions and behaviors. Dotted with opulent mansions, follies, and temples (their Moorish architecture inspired by the Brand Library in Glendale, California, Woodring’s local library in his childhood), the bucolic Unifactor can be a dangerous place: characters are seized by mysterious illnesses and compulsions, things are altered by contact with one another or with more powerful forms or strange devices, and the outré local wildlife and the supernatural are a constant threat, meaning the situations Frank encounters often shift from amusing to frightening or horrifying in the space of a single frame.

Born in Burbank, Los Angeles in 1952, the son of an engineer and a toxicologist whose work at the L.A. County Coroner’s office involved doing “a lot of morbid things,” the young Woodring was prey to what he calls “apparitions”: “large, silent, rotating faces hovering over the foot of my bed… Big, horrible, grimacing, deeply-lined faces with their mouths open, yelling at me silently… a staring eyeball that I would see with my eyes open or shut sometimes.” He describes himself as a death-obsessed child given to impulsive, inappropriate behavior: “not gloomy, but desperate.”

His compulsion to draw was galvanized by a trip to a 1968 Surrealism retrospective at the Los Angeles County Art Museum, which he says “took me about three days to get over,” as well as a potent early experience with LSD, which “wiped away the world like wiping away watercolor with a wet sponge.” At 19, Woodring briefly became a garbageman before starting work as a cartoonist for publications including Car-Toons magazine. In 1979, he moved into animation when he took up a position at animation studio Ruby-Spears, working on cartoons including Mr. T., Rubik the Amazing Cube, and what he calls “one of the masterpieces of shit,” Turbo Teen. In his six years there, he was also tasked with coloring the concept drawings that comic legend Jack Kirby—who worked on the company’s Thundarr the Barbarian—was engaged to produce for the studio. In addition to the Surrealists, whose echoes are so tangible in his work, Woodring cites as influences Erik Satie, Rimbaud, Alfred Jarry, Malcolm Lowry, Rembrandt, Boris Artzybashef, and cartoonist T. S. Sullivant. An interest in the transcendental also informs his art, aligning him somewhat—in intent, perhaps, if not in style—with another visionary artist, Alex Grey.

While at Ruby-Spears, Woodring began self-publishing Jim, a fanzine containing art and writing, which was brought to the attention of Fantagraphics comics’ Gary Groth by comic artist Gil Kane, who was also employed at Ruby-Spears. Groth offered to publish it if Woodring would include some comics and, in 1987, Fantagraphics took over the publishing of Jim, on the cover of whose fourth issue Frank would make his first appearance in 1990. He would subsequently appear in several other comics, including Tantalizing Stories, before being given his own comic in 1996.

With his simplified rubbery form and bulbous feet, Frank resembles a remnant from the world of pre-war comics and cartoons. But though appearing at first sight perhaps misleadingly similar to other “Pop Surrealism” that traffics in the dreamlike dissonances created by decontextualising and distorting the cuteness of childhood imagery, Woodring’s work never sinks into the decorative dead-ends of many of those who might seem to be his logical peers. His surrealism is not exasperated kitsch but rather feels like an attempt to codify something ineffable about the nature of existence in comic book form. Everything in Frank’s world—biology, design, events—follows its own incomprehensible yet intuitively reasonable logic, giving Frank something of the quality of a folk story, its situations and forms obeying ancient patterns and recurring again and again—rubbed smooth by endless retelling inside Woodring’s brain. Horrible and beguilingly innocent at the same time, Frank‘s repetitions and lack of conventional narrative resolution never grow boring, successive iterations instead seeming increasingly profound as they unspool in a series of surreal tableaux. The whole thing pulses with metaphor while never losing any of its intense graphic power, the almost ritualistic shading in Woodring’s black and white work and the lysergic glow of his color work creating a memorable sense of both solidity and unreality. Woodring’s Frank offers no answers, only a window onto a personal world that, as inscrutably alien as it is, is on some profound level eminently relatable.

One thought on “The Surreal Within the Everyday: Jim Woodring’s ‘Frank’”