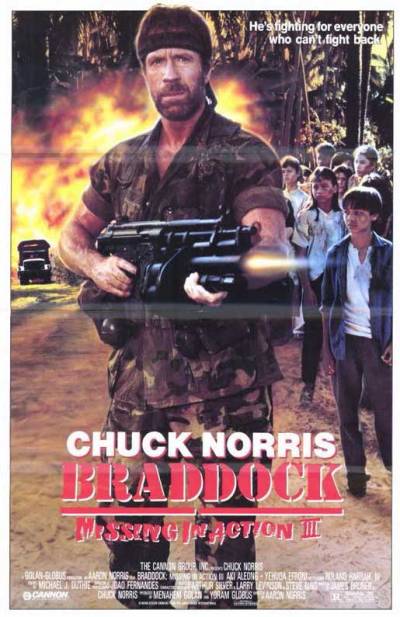 A few years ago, I was at a New Year’s Eve party where the TV was tuned to a Cannon Films action movie marathon. The mindless gunfire and body blows became perfect New Year’s Eve party fodder as the crowd got more and more intoxicated: Death Wish 2 led into Death Wish 3, and the partygoers pontificated on the transformation of the series from pointed social analysis to proto-fascist action schlock.

After midnight, the network changed gears slightly, showing 1988’s Braddock: Missing in Action III. Starring Cannon Films mainstay Chuck Norris and directed by Norris’s brother Aaron, Missing in Action III stands as the final marker in a decade full of action flicks haunted by America’s involvement in Southeast Asia. The origins of the Missing in Action series itself are shrouded in the kind of studio skullduggery for which the Cannon Group became known in the 1980s: find a trend that’s about to be hot, grab the intellectual property first, and get a quickie version out in the global family of Cannon-aligned theaters. The treatment for what would become Rambo: First Blood Part II (1985) had been floating around Hollywood for years, written by a young up-and-comer named James Cameron. Cannon, obviously “inspired” by this treatment, shot both Missing in Action films in Mexico at the same time in 1984 and got the films out a year before the Stallone/Cameron Rambo screenplay made it to theaters.

The Fall of Saigon sequence that kicks off Missing in Action III is surprisingly effective cinematographically. It features a savvy mix of archive footage and staged scenes, the latter filmed on the streets of Manila in the Philippines, of the Communist “sack” of South Vietnam. The entirety of Missing in Action III was filmed in the Philippines, in fact, thanks to continuing Filipino cooperation with the American film industry under the newly-elected Corazon Aquino administration. During the recently-ended rule of Ferdinand Marcos, a dictator long supported by the CIA, dozens of B movies (and quite a few top-of-the-line Hollywood productions) were shot in the island nation, its shores and jungles doubling for locales like Vietnam. During the filming of Missing in Action III, a helicopter accident killed four Filipino soldiers seconded to the production, oddly reminiscent of the accident on the set of Twilight Zone: The Movie five years earlier. In another odd coincidence, the Missing in Action accident occurred just a few days after director John Landis was found “not guilty” in the Twilight Zone case.

In the Fall of Saigon sequence, Braddock strides across the U.S. embassy office floor, a man out of space and time, looking more like a G.I. who’d be found humping through the rice paddies of the war in 1968 or ’69 instead of an officer in an embassy in ’75. (It should be noted that Missing in Action III retcons the original pair of Missing in Action films, in which Braddock was a prisoner of the Viet Cong right up until the early ’80s). Braddock’s Vietnamese wife, Lin (Miki Kim), works at the embassy but gets separated from Braddock and is not able to escape to the U.S. with him. Braddock believes her to be dead, but, twelve years later, he finds out from a Catholic missionary that Lin is alive, and what’s more, that he has a son he didn’t know about. Ducking CIA agents (who don’t want Braddock to go off half-cocked on a rescue mission), Braddock hires an old Australian mate in Bangkok to fly him to Vietnam, where Braddock evades Communist Vietnamese patrols in a portable, personal speedboat packed with weapons, and subsequently sets out on his rescue mission.

In American film, TV, and theater in the 1980s, “Amerasian” kids, fathered during the final years of the Vietnam War, were a common theme and plotline for stories haunted by the war, a real, personal, physical manifestation of the confusion and heartbreak of the conflict. The Catholic mission of Missing in Action III is specifically dedicated to serving these children, who were often unwanted and ostracized in postwar Vietnam. Right around the time of the release of Missing in Action III, Congress passed the American Homecoming Act, dedicated to bringing Amerasian children and their families to the U.S. The Act enabled almost 100,000 Vietnamese, both the children of G.I.’s and their families, to obtain refugee visas to come to the United States.

In the establishing scene at the mission, Reverend Polanski (Yehuda Efroni) says grace with a multiracial group of Amerasian children. As Braddock reunites with Lin and meets his son, Van (Roland Harrah III, in his motion picture debut), it’s not long before the evil General Quoc (Aki Aleong) finds the newly reunited family and, in a scene eerily reminiscent of the famous photo of a South Vietnamese soldier summarily executing a Viet Cong prisoner during the Tet Offensive, shoots Lin in the head, taking Braddock and Van prisoner. It’s during this lengthy, sadistic, nearly ten-minute torture sequence (which IMDB Trivia bizarrely calls “one of the movies’ longest bondage-and-torture scenes“) that we see the true evil of the Communists who defeated Braddock and the US of A twelve years ago. Like the Vietnamese sadists in The Deer Hunter‘s (1978) famous pair of Russian roulette sequences, Missing in Action III paints the diabolical General Quoc as nothing more than a classic “yellow peril” torturer, using techniques such as electrocution and hanging in stress positions that were, during the Vietnam War, more frequently utilized by the CIA. Braddock suffers for America and for his family, almost Christ-like; it’s no coincidence that Braddock finds his family through a religious institution (John Rambo also took it upon himself to save a Christian mission in 2008’s sequel Rambo, set in Burma).

As the nearly-superhuman Braddock inevitably escapes his torturers, the final act of Missing in Action III devolves into the kind of feel-good action-revenge flick that was Cannon’s ’80s specialty. As in the films of his Cannon counterpart Charles Bronson, heavy firepower enables Chuck Norris to even the odds against the hordes of nameless thugs who threaten the American Way of Life. There’s even a chance for Braddock to avenge a brutal rape, just as in the Death Wish films. The thugs and creeps in the Death Wish films and the nameless Communist cannon fodder in the Missing in Action films fulfill the same psychological role: as symbols of the brutality and terror of collectivized identity posed explicitly against the sacrosanct and heroic American individual. Furthermore, the redemption arc at the center of so many 1980s American narratives about Vietnam is uncomplicated by reality, in both the absurd sense of one man going up against the entire Vietnamese army and the remarkable porousness that allowed action stars to return to Vietnam again and again to rescue loved ones and POWs, obviously a psychic wound that still haunts America to this day.

In the process of the escape, the formerly-cold Van learns to love and respect his American father and eventually yearns to escape with him to the Home of the Brave. In the decade following the end of the Vietnam War, Americans wanted easy, neatly packaged answers; they wanted forgiveness for a war that many knew, deep down, had been lost and had been prosecuted with cruelty and sadism. John Rambo and James Braddock are avatars of not just an American desire to “put history right,” but also to find some redemption. It’s that classic American underdog narrative again. Missing in Action III‘s poster declares that Braddock is the man who’s “fighting for everyone who can’t fight back.” Is Cannon’s promotional department referring here to Van and his fellow orphans? Or the men who died in the war nearly two decades prior? Films like the Missing in Action series attempt to collectively salvage some good from a war that tried (and failed) to teach us that our imperial aspirations ultimately just end up getting a lot of innocent people killed for no good reason. If a real American warrior like Rambo or Braddock can bring the boys home—whether they’re POWs or Amerasian orphans—then maybe all those fighting men will have not died in vain.

2 thoughts on “Redemption and Revenge: ‘Braddock: Missing in Action III’ and the Legacy of Vietnam”