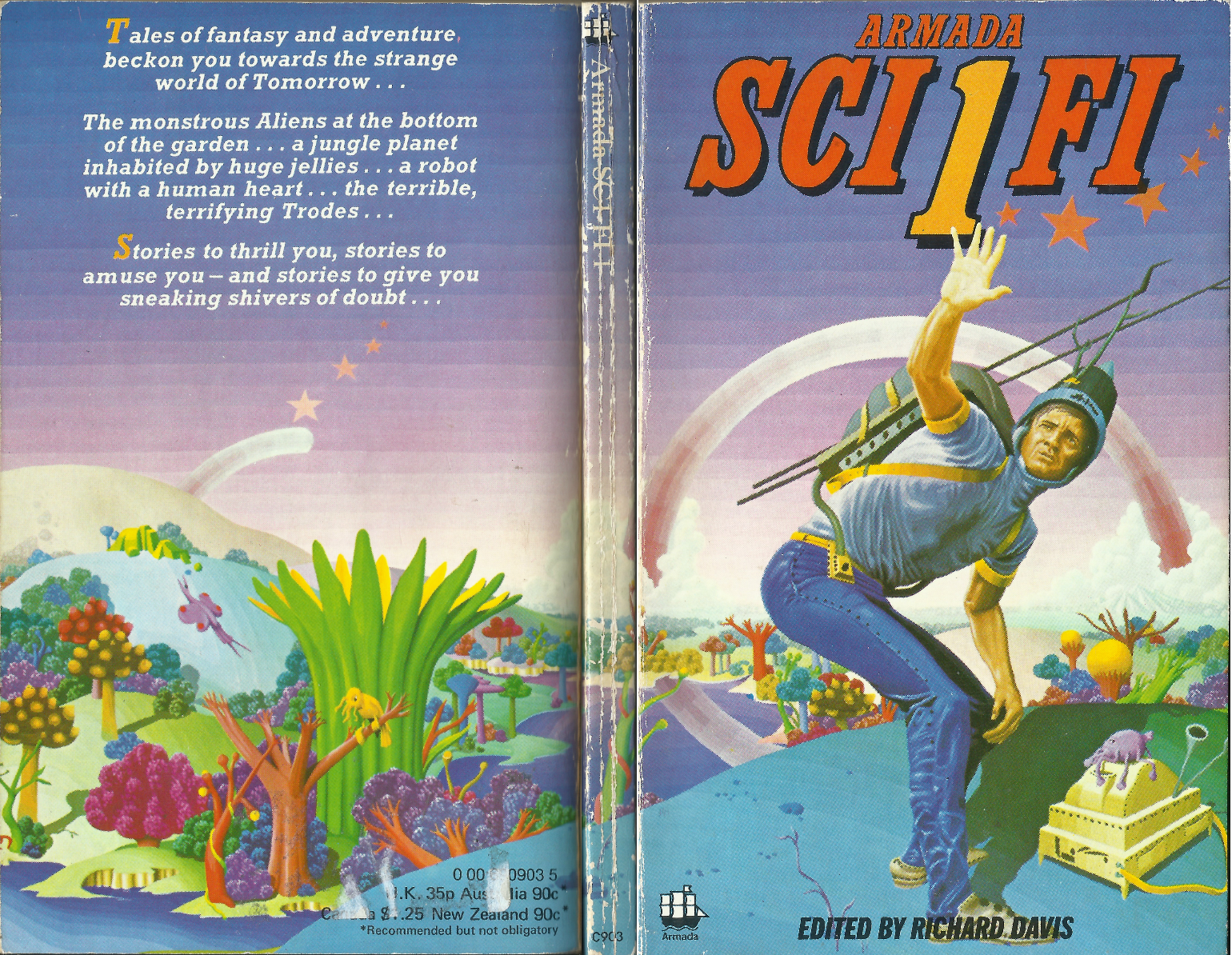 It’s one of the peculiarities of SF literature—and perhaps of genre writing in general—that the imagery generated to sell and promote it has often proved to be more visionary and transformative than the writing itself. Serious-minded SF fans are often heard complaining about this irony, claiming (not without some justification) that Star Wars, say, is not actually science fiction but rather fantasy, or just straight-up infantile dross. That attitude, though, ignores the reality that science fiction, like language, is defined as much by deductive usage as it is by inductive rules. The inspiring symbolist archetypes that SF art and visuals liberate from the anchoring texts they purportedly illustrate—take, for example, Chris Foss’s vast, incomprehensible, surrealist spacescapes—are, and have always been, as much a part of what science fiction is about as any literary exploration of the implications of new technologies or sociologies. This imagery then feeds back into what becomes written SF in a process similar to that by which SF-fueled childhood dreams lead many to pursue careers in technology and science, and subsequently play a role in driving innovation in the real world.

Such was the economic white heat generated by the 1977 release of Star Wars that it is easy to forget science fiction aimed at children existed at all in the “antebellum” era. From the standpoint of today, that film’s crazed cocktail of high cinema and low myth instinctively feels as though it must have been the Rubicon for something entirely new, but the market for juvenile SF thrills had been a lucrative one since the ’50s and still was in 1975 and 1976, when British children’s book publisher Armada released three anthologies specially commissioned for young children—Sci-Fi 1, 2 and 3.

“More people are reading science fiction today than ever before,” stated editor Richard Davis in his buoyant introduction to the first volume. “I think this is because since the moonwalks and Apollo space probes we’ve all been forced to face the fact that space travel and the visiting of other planets are not so out of reach as we once thought them… Perhaps one of you, reading this, will go to the Moon or even to Mars. You may even meet an Alien [sic]!”

It’s hard not to feel a gulf of time yawn beneath my feet as I read these words today: Davis was certainly indulging in a bit of child-titillating hyperbole, but in the as-yet undisillusioned dark ages of less than a half-century ago, these two grand science fiction concepts—interstellar travel and alien life—still walked abroad with big moonboots, deaf to the dispiriting warnings of actual science that we weren’t going anywhere and probably weren’t going to meet anybody either. Beneath the patter there was also a growing awareness that the world the children reading these books might end up inhabiting did actually stand a good chance of being strange and alien when compared to the world their parents had lived in.

Changing key for his sober conclusion that “Science fiction [was] a way of keeping our minds open and receptive to new ideas,” Davis (1935-2005) was an established horror story writer in his own right, but was better known as a story editor for two BBC television series—1968’s Late Night Horror and the respected SF anthology series Out of the Unknown (1965-1971), featuring adaptations of work by, among others, John Brunner, J.G. Ballard, and Fred Pohl). He was also a prolific anthologist: over the same period that the Armada books were published, he was editing Abelard-Schuman’s Space series of anthologies, a somewhat more straight-faced affair that ran from 1973 to 1975 and featured short stories by well-known SF authors selected for children. Perhaps it was Davis’s contact with Out of the Unknown that gave the Armada Sci-Fi series its whiff, however slight, of radical New Wave sulphur—the self-aware, experimental, literary, “soft” approach exemplified by the British New Worlds magazine during Michael Moorcock’s tenure as editor, which had been exerting increasing influence since the mid-’60s.

Armada books—brainchild of Yorkshireman and “maverick publishing genius” Gordon Landsborough, who had worked his way up by editing Authentic Science Fiction magazine—was an imprint of Collins books, and published paperbacks for 10- to 15-year-olds. Although initially specializing in wholesome young detectives from across the Atlantic such as Nancy Drew, The Hardy Boys, and The Three Investigators, as well as homegrown stalwarts like Biggles, Billy Bunter, and the work of Enid Blyton, in the late ’60s Armada began its long-running series of Armada Ghost Books. Given the knock-on effects of the space race proper, the amphetamine cosmic dreams of glam rock, and the profitability of adult paperback SF, the targeting of science fiction to the youth market was a practical inevitability.

As far as the infant version of me was concerned (I received them on consecutive birthdays and festivities), the main function of the Armada Sci-Fi books was to serve as load-bearing structures for their transcendently strange covers, whose unnervingly plastic surrealism and metaphysical settings are now instantly recognizable as the work of the extremely talented Bob Fowke (who the same year also painted excellent covers for the Panther Books editions of Lovecraft’s The Horror In the Burying Ground and The Horror in the Museum). In a 1974 edition of Science Fiction Monthly magazine, Fowke said of his symbolism-laden imagery that a picture “has to have impact at all levels, conscious and subconscious,” and beneath their cheery renaissance colors and appealingly tactile forms, the images adorning Sci-Fi 1, 2, and 3 seemed so densely packed with inscrutable information that the futures they depicted stirred something deep inside my psyche. As a vision of what the future might hold, they are far from reassuring: all three show a human being in some way under duress, either menaced by robots, deafened by aliens, or simply confused and worried in unknowable worlds (the space traveler, his bizarre devices somehow possessed of their own logic, featured on the cover of the first volume). The contrast between awe and mystery, between isolation and alienation—classic New Wave “soft” SF tropes—still evoke a powerful frisson of cosmic eeriness.

In further confirmation of the books’ underground SF credentials, the interior illustrations of the three volumes are by Jim Cawthorne, best known for the artwork he provided for the comic book adaptations of his friend Michael Moorcock’s Elric books, which were released by alternative Mancunian publisher Savoy. In his way a defining figure in counterculture-inspired depictions of fantasy, Cawthorne’s work was sometimes (presumably when time or deadlines were working against him) a bit thin on detail, and the spontaneity—and occasional crudeness—of his lines can work for or against him, the latter often being the case here. While some of the illustrations are evocative despite their simplicity, others are flat and look rushed, and the friction between their workmanlike functionality and the brain-fuck perfection of the covers galled youthful me to such an extent that as a (somewhat precious) child I would often avoid reading the pages featuring them. It’s strange to think that at the same time he was working on this project, Cawthorne was presumably putting the finishing touches to his 1975 graphic adaptation of Moorcock’s Stormbringer—although it might explain the cursory nature of some of the pictures.

“At the Bottom of the Garden” 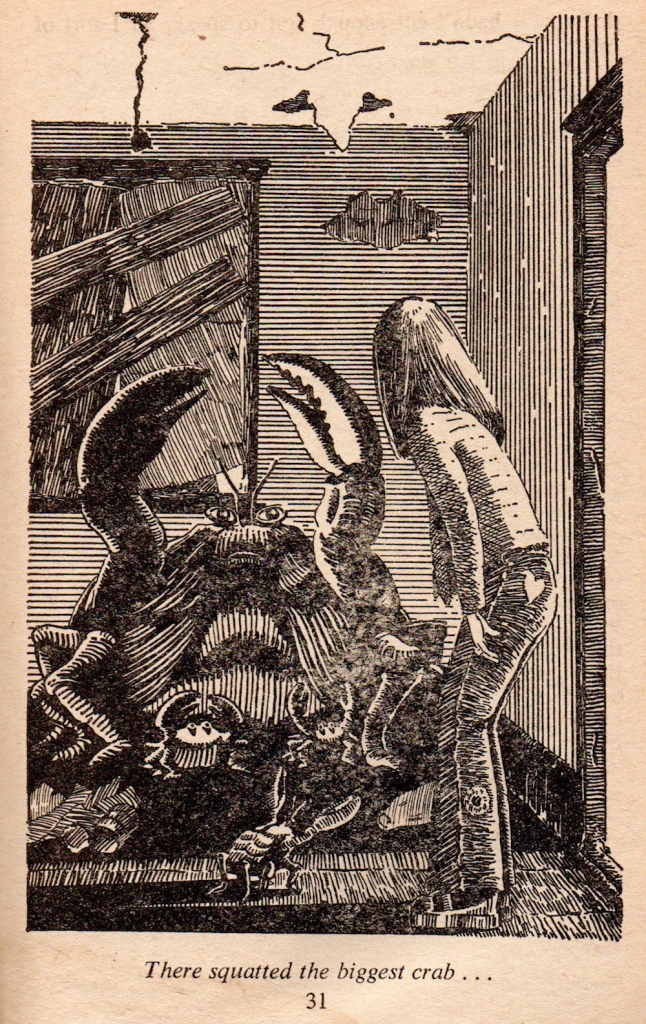 Probably the most peculiar thing about the series is the aforementioned window onto a pre-Star Wars world of juvenile SF, which proves to be a surprisingly lugubrious and frightening one. It often looks remarkably adult, in fact, and quite similar to horror, with aliens and robots taking the place of ghouls and phantoms. Davis wrote, and specialized in editing, horror stories of the unnerving (as opposed to the face-torn-off) type, and his tastes are evident in the choice of stories included. Even when they aren’t actually frightening, they are often melancholy and disturbing, with mankind painted as an agent of corruption. This was a frequent theme in the increasingly politicized and environmentally aware adult SF of the day, and it rears its head here on numerous occasions. Predictably, escape and the difficulties inherent in making your voice heard by adults are frequent themes too. In retrospect, I might have been a little harsh on the stories. The covers reprogrammed my mind; how could the collection of often rather juvenile tales within have competed? Many of the tales do attempt to tackle interesting themes and issues, but the brisk, “now children, are you sitting comfortably, then I’ll begin” tone in which many of them are written was off-putting then and remains so now.

The one story that did make a huge impression on six-year-old me, though, proves to be just as disconcerting today as it was in 1976: David Campton‘s “At the Bottom of the Garden,” the story of the friendship between unprepossessing, neglected little Geraldine and something called Ineed that has furry teeth and can rearrange the human body as if it were Lego. As the story unfolds, Geraldine’s parents gradually begin to realize with horror that Ineed is not simply an imaginary friend conjured up by a lonely child. The absolutely relatable mundanity of its setting and its genuinely disturbing and brilliantly-rendered finale carries it through, assisted by the best black and white illustration in the whole series. “At the Bottom of the Garden” was adult enough and scary enough to be included in the 1978 Daw anthology The Year’s Best Horror Stories VI. It turns out that Campton (1924-2006) was best known as a dramatist—apparently one of the first to adopt the Theatre of the Absurd style made famous by Samuel Beckett and Harold Pinter. Campton also wrote an episode of and worked on the adaptations for the BBC’s Out of the Unknown. Campton also provided one of the books’ other memorable stories, “The House Crab Project,” which, along with two Twilight Zone-esque stories by Margaret Little and the vaguely Aldiss-flavored “The South Gate Sea” by Chris Parr, are the ones that still make for surprisingly powerful reading. What is most notable about the whole undertaking is, perhaps because of Davis’s bent for the macabre and gloomy, how palpably elegiac the mood is—dispatches from a world that is dying or in some way doomed.

A fourth volume of the series was also published, but, after the searing assault of the first three, the rather less psychotropic cover art clearly can’t have caught my infant eye as I trawled the racks of W.H. Smith, Christmas book-token in hand. The first two volumes were republished in 1980 as SF 1 and 2, a telling sign of how even the world of children’s books was perhaps attempting to distance itself from the glittering, disposable pleasures of “sci-fi.” The Armada Sci-Fi Books may not be literature for the ages, then, and little trace remains of their passing, but as artifacts, their overlap of progressive adult thought informing (sometimes) ambitious children’s writing still hums with the possibilities made manifest in their beautiful cover art. It would be interesting to know how many other small citizens of the Airstrip One of the late ’70s later discovered that their aesthetic scanners had been irreversibly fused into position by the incidental beauty of these slim volumes.