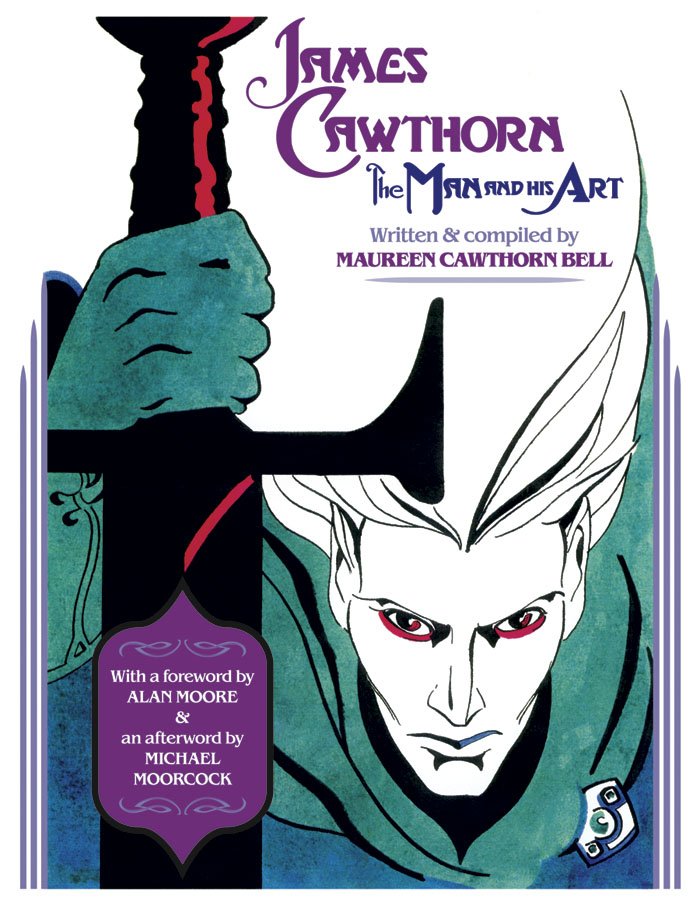 Stuff has to happen when it has to happen, I suppose. Back in the summer of 2018, I’d pre-ordered a copy of James Cawthorn: The Man and His Art, but by the time it was released, the family health issues that had been increasingly dominating my life over previous years had consumed it completely. When the book arrived, I didn’t even leaf through it; just unwrapped it and stuck it on a shelf, registering only that it weighed a ton and must be hundreds of pages long. And perhaps because of its association with a sad time, I completely forgot about its existence for a couple of years, only finally opening it the other night on a sudden impulse. Would what it contained be powerful enough to burn off any negative personal associations and also not be the kind of dismal self-congratulatory fannery that makes you want to chuck all your books away and start getting into metalworking or something? Well, yes it would—James Cawthorn: The Man and His Art is absolutely fucking mind-blowing.

Back in the ’70s and ’80s, Cawthorn was everywhere: the covers of his comic book adaptations of Michael Moorcock’s Elric stories were a fixture on the wall of every head shop, goth shop, comic shop, second-hand bookshop, and pawn shop I entered until I was in my mid-20s, and I’d grown up seeing his illustrations in things like New English Library’s Strange World of Science Fiction, the Savoy Books edition of Moorcock’s The Golden Barge, and the four kids’ sci-fi anthologies that Armada books put out in the 1970s. But, weirdly, it wasn’t until I sat down with this volume that I realized just how deeply his work saturates my own aesthetic life. Which is to say, my life. Not that I’m claiming my aesthetic or actual life are of two shits’ worth of interest to anyone except myself, of course, but it’s a strange feeling to suddenly realize that the blur that’s always been there at the edge of your attention is actually one of the spinning flywheels driving your mind—reminding you how many of those people existing on the margins of the culture remain marginal despite their contributions to shaping it. Cawthorn—who passed away in 2008—is a recognized figure among genre obsessives, but how did someone so interesting and idiosyncratic, who was once so ubiquitous, fall into such relative neglect?

Cawthorn was a child of the North East, an unfairly disregarded region of England, historically far from the money of London or Manchester, that has suffered massively since the Conservative government led by Margaret Thatcher set in motion the definitive closing down of the mines, heavy industry, and shipyards that had been the area’s backbone for centuries, without bothering to set up anything to take its place. As the final remnants of the steelworks and shipyards are gradually sold off to venture capitalists, that process of neglect is now pretty much complete, yet it’s a beautiful and mystical place with its own strange magic, with deep links both to the ancient past and to the future—which makes sense, given how much of the future the locals dug, hammered, and welded together before they were sold out by the Tories. If you’re in any doubt about the North East’s futurist vocation, just remember that some of our culture’s most pervasive images of the future are the handiwork of another product of the region, one Ridley Scott, who certainly took inspiration from the vast petrochemical complexes lining local rivers (as anyone who ever flew into Teesside airport at night can testify). A self-taught, working-class illustrator, Cawthorn seems like a perfect incarnation of that local genius, and in a way his relative anonymity mirrors that of his native land.

James Cawthorn: The Man and His Art contains (apparently—I didn’t count) something like 800 color and black and white illustrations that cover his entire career. The contrast between the scratchy detail and dense chiaroscuro of his b&w work and the vaguely lysergic glow of his color art highlight how the two exist as entirely distinct entities, which, however, complement and complete one another when seen together here. And his color work also inspires the thought that perhaps Cawthorn’s relative oblivion is partly due to his style being too outsider-ey, too delicate and lurid (in a good way) to work at its best in the medium that was most lucrative and that offered most visibility during the time he was working—the paperback cover. 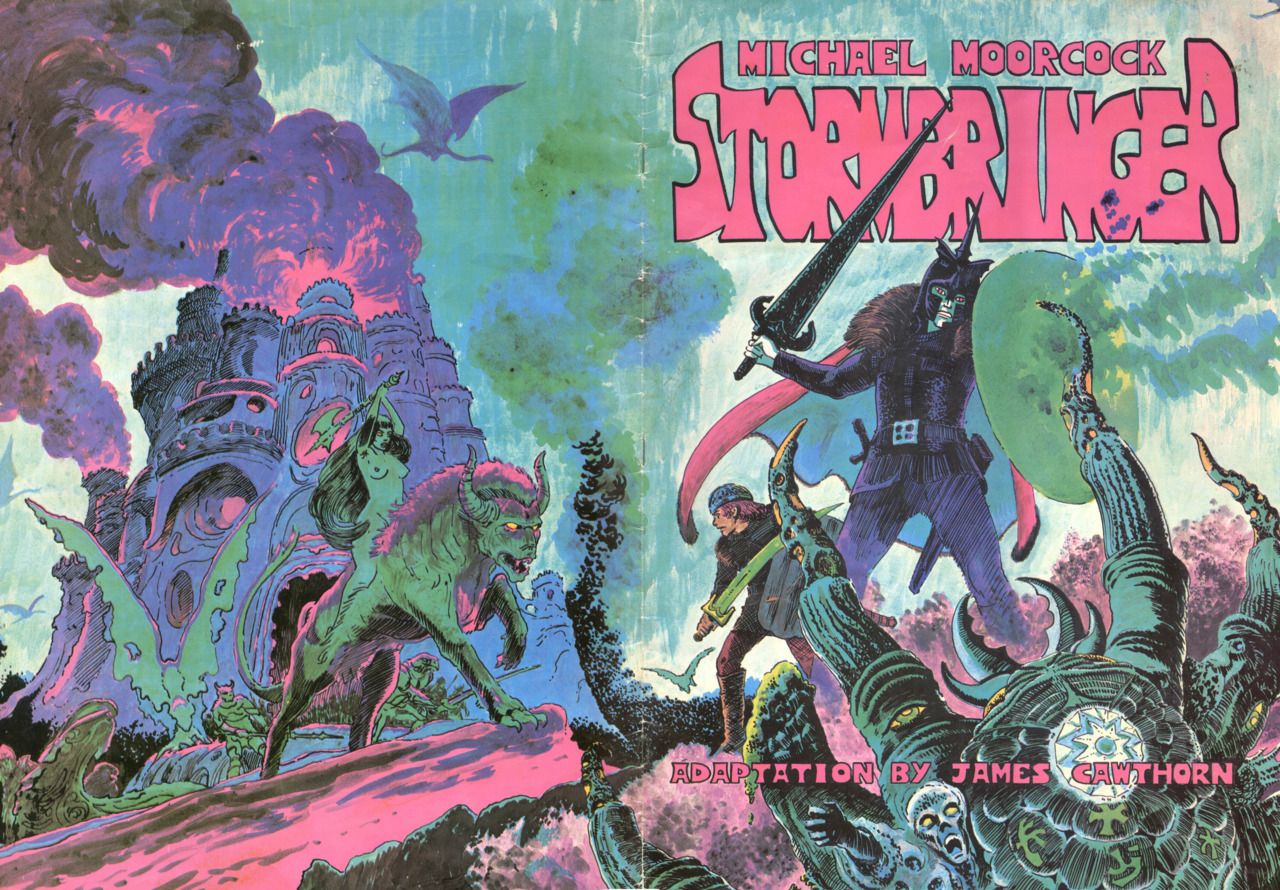 In fact, one striking thing about Cawthorn’s work is that it always retains the beauty of the obsessive amateur, never feeling glib or by-the-numbers. Even in the drawings that look most rushed, you can feel the commitment animating each piece—the euphoric sensation of watching cheap felt-tip pens somehow create entire new worlds. And unlike many other artists, Cawthorn’s aesthetic becomes more, not less, compelling and intense the more of it you see, as he endlessly mines and refines the mineral splendors of his own imagination in pursuit of his totally individual aesthetic. Looking through the book, it rapidly becomes clear that Cawthorn’s best-known images—to those who know them—aren’t even his most striking. In fact, it’s difficult to illustrate this review properly because some of his most memorable work doesn’t exist even in the daunting repository of everything that is the internet, and I don’t want to bugger up the spine on my copy.

The book has clearly been a labor of love for Cawthorn’s sister Maureen and publisher John Davey, and Maureen’s evocative and delicate memoir of him casts a lot of light on the personality behind the portfolio of artwork. Alan Moore and Michael Moorcock (a close friend of Cawthorn from his youth until Cawthorn’s death) both provide genuinely touching contributions, and the ever-reliable John Coulthart does a lovely job of arranging and presenting everything in a way that makes sense of the ridiculous amount of material, which ranges from the comics Cawthorn drew at school to the lovely t-shirts and birthday cards he produced in mind-boggling numbers for family and friends.

So like I said, James Cawthorn: The Man and His Art is absolutely fucking mind-blowing, a reminder of the violently surreal and inspiring power that imagery of this kind can possess when emptied of retrogressive cliché and self-satisfied rhetoric and filtered through a distinctive talent. It’s a potent inducement to pick up a pen, or a pencil, or a keyboard, or just anything, and put your imagination into use.

4 thoughts on “The Jewel in the Skull: ‘James Cawthorne: The Man and His Art’”