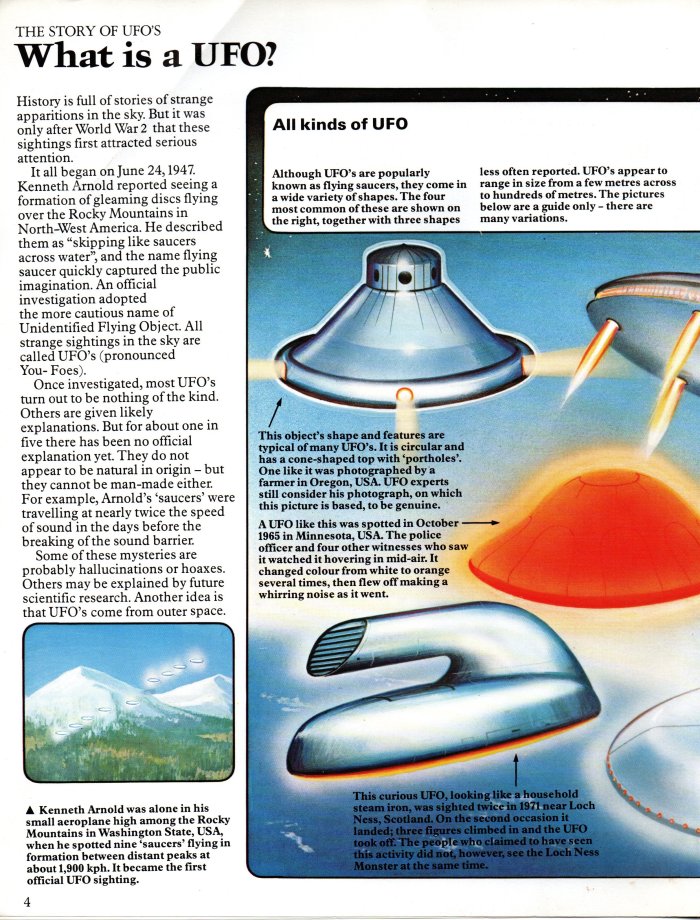 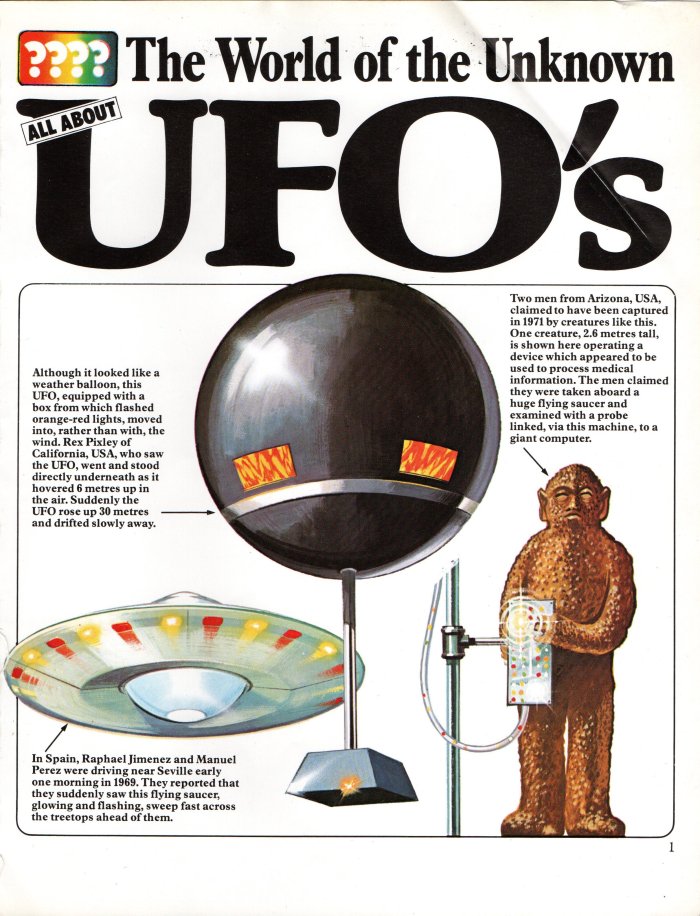 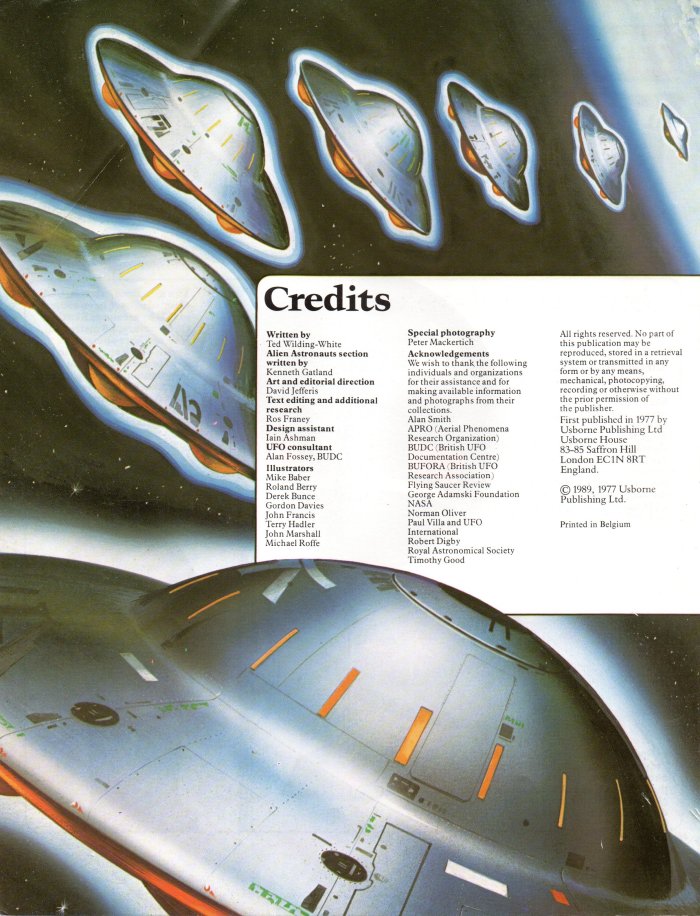 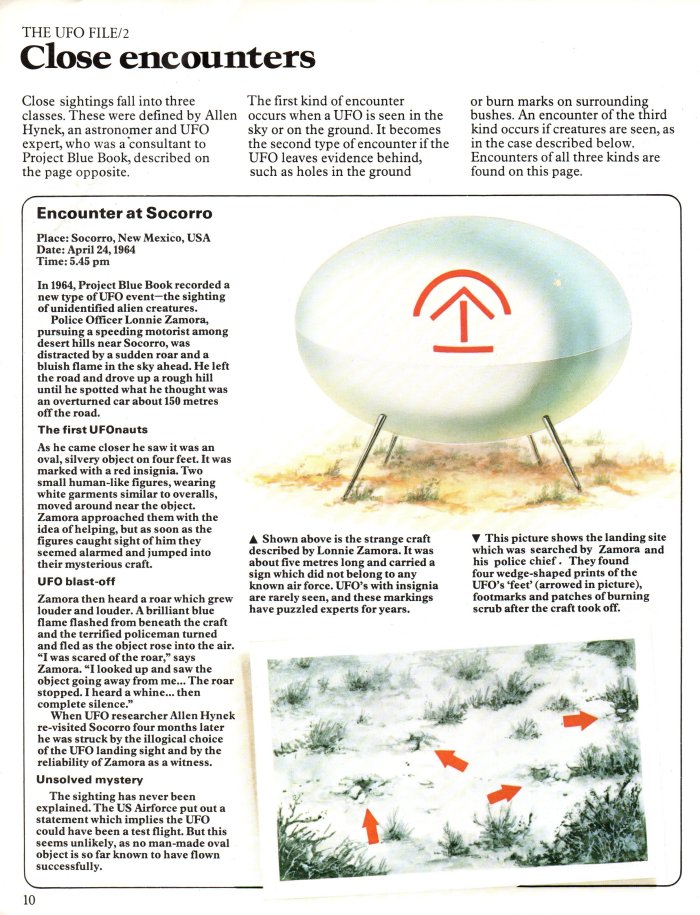 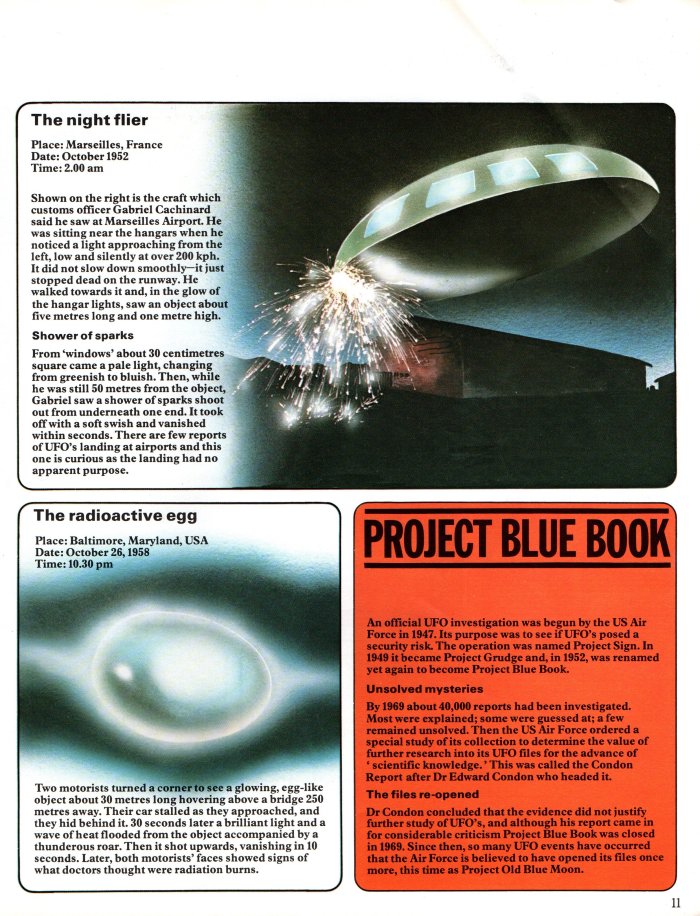 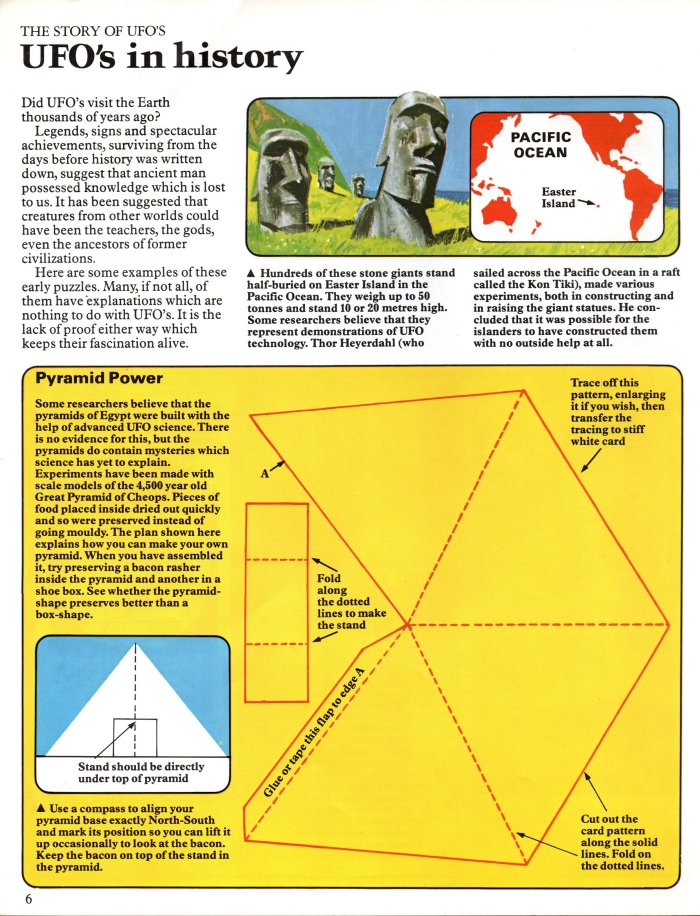 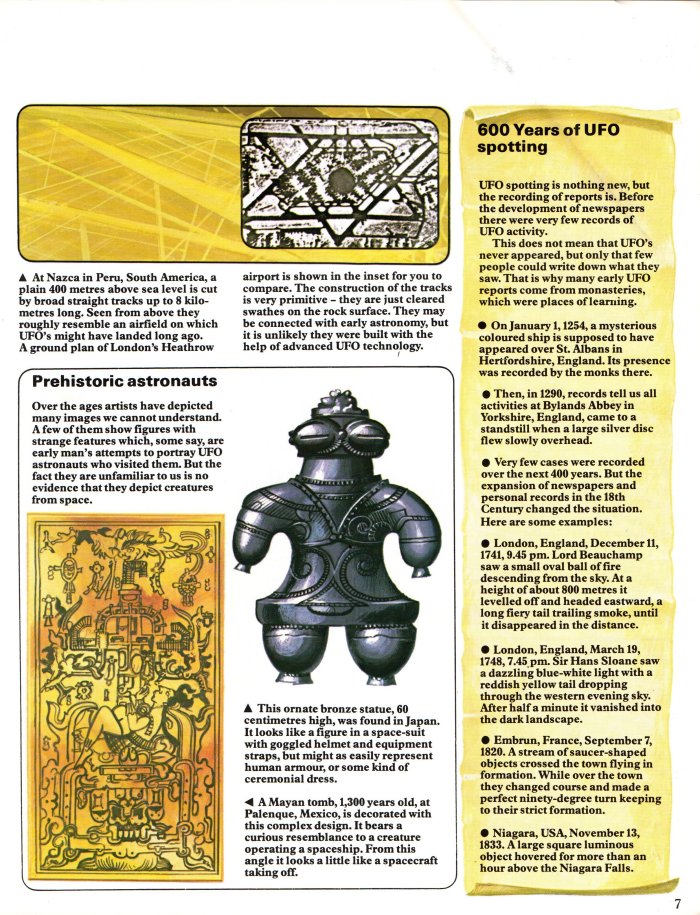 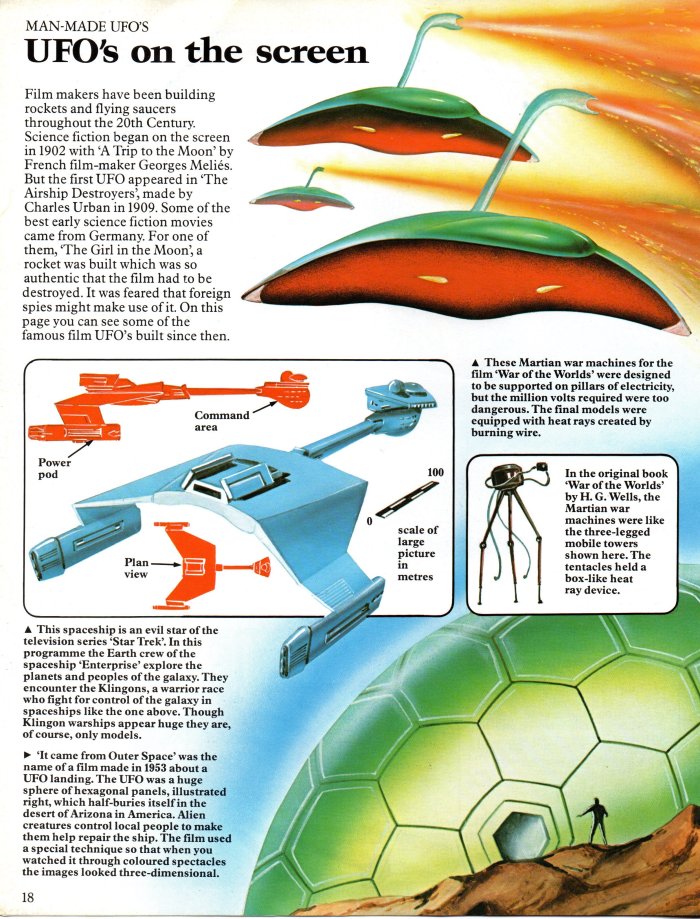 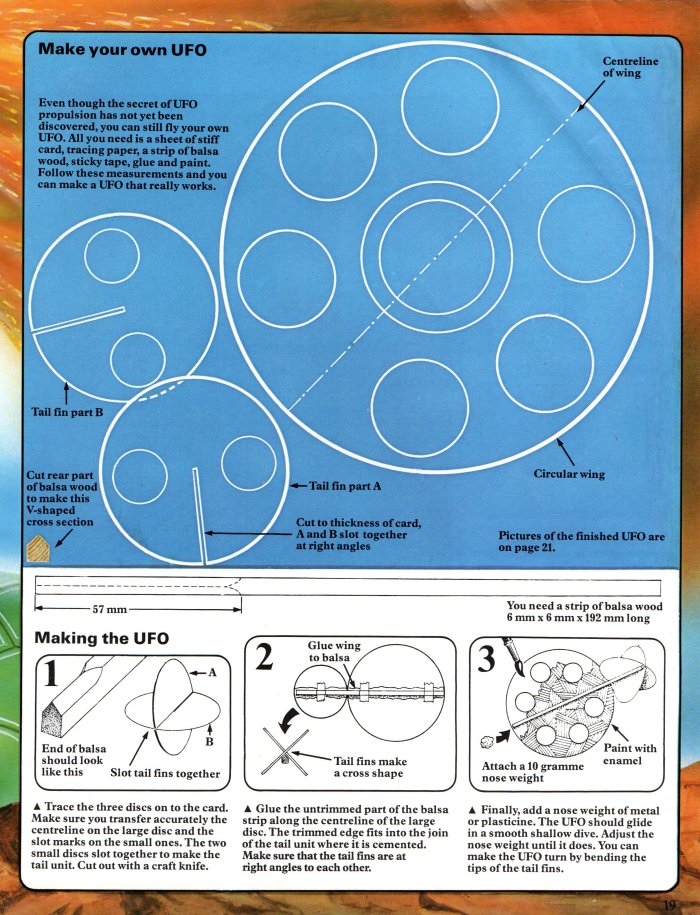 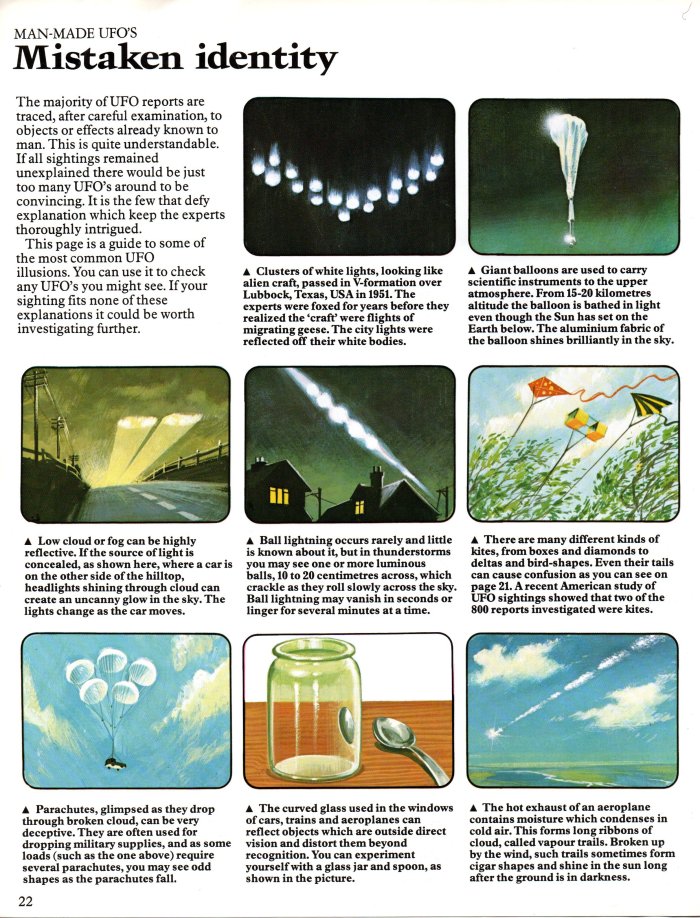 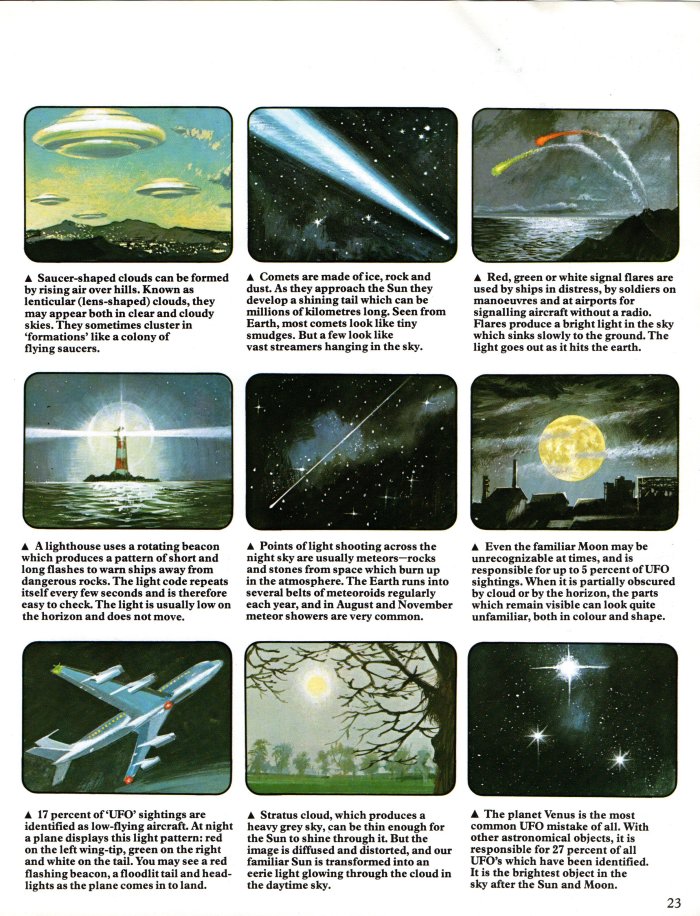 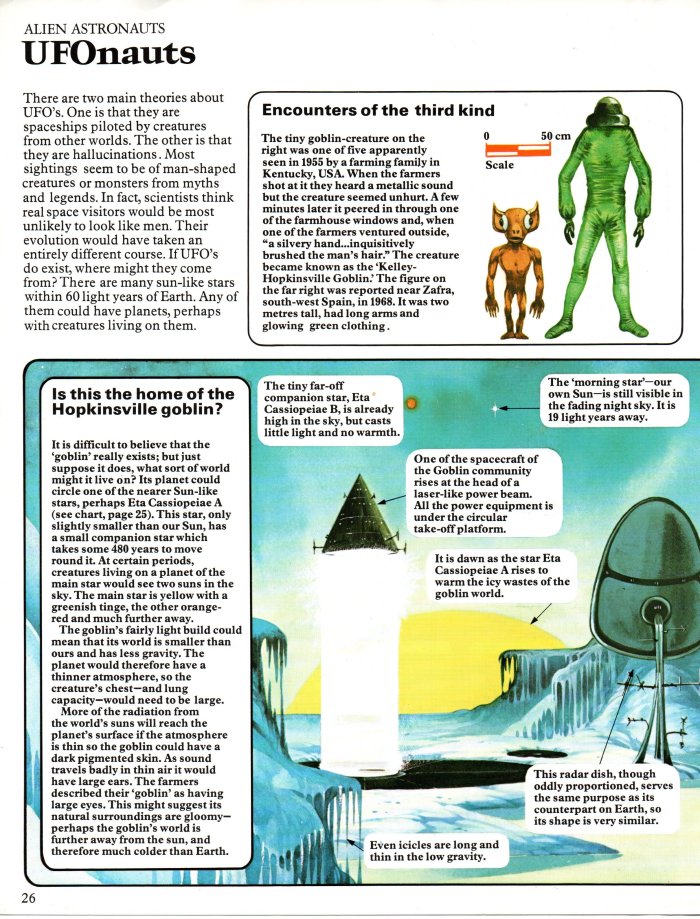 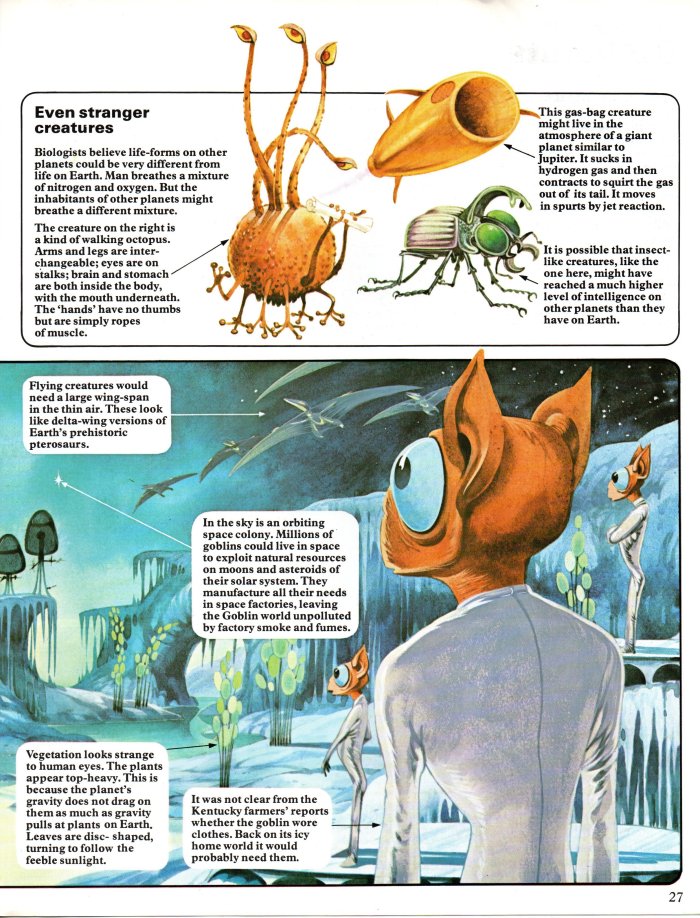 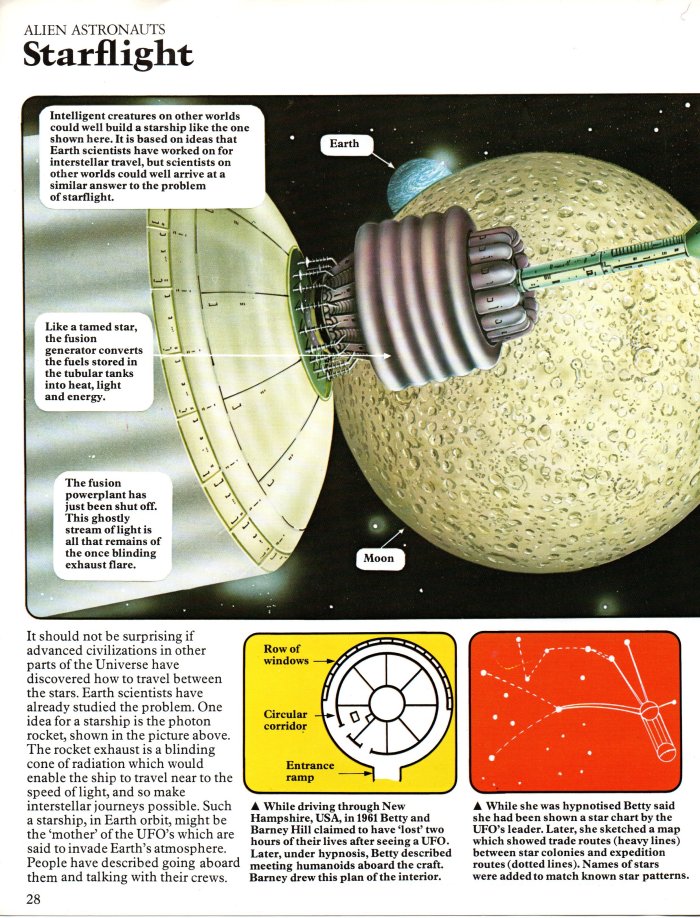 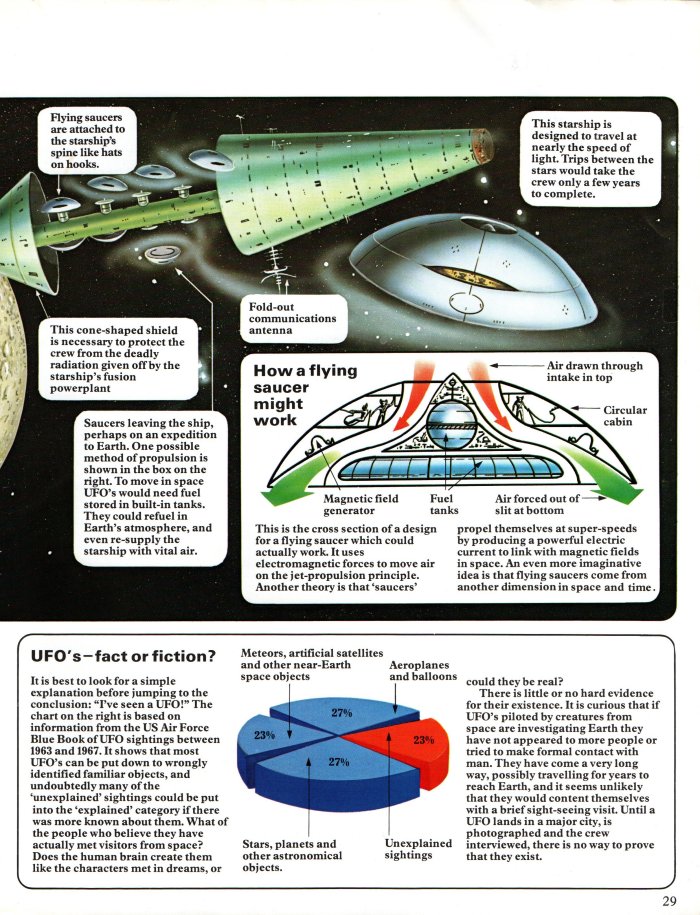 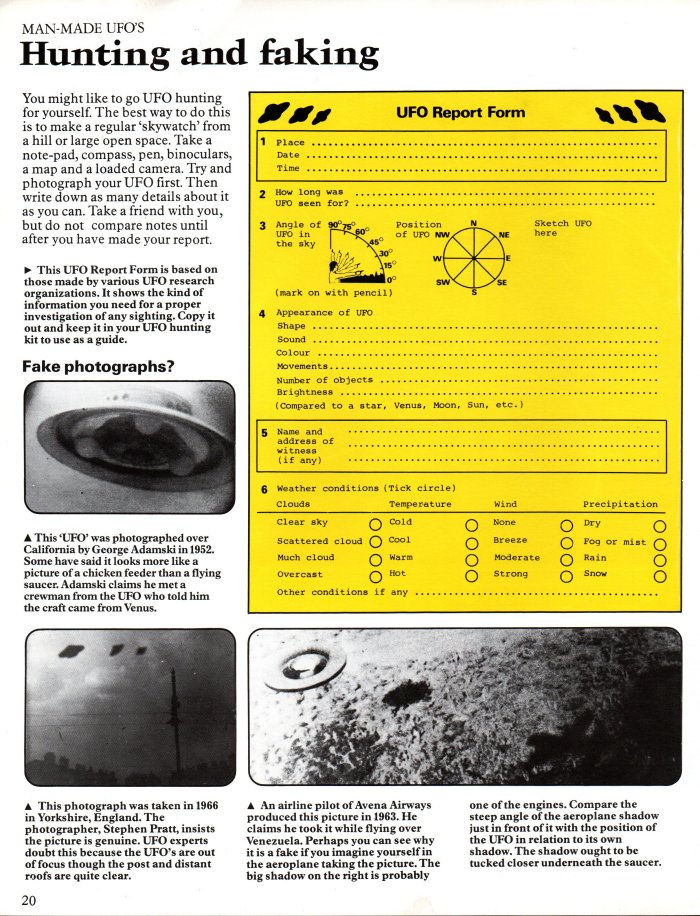 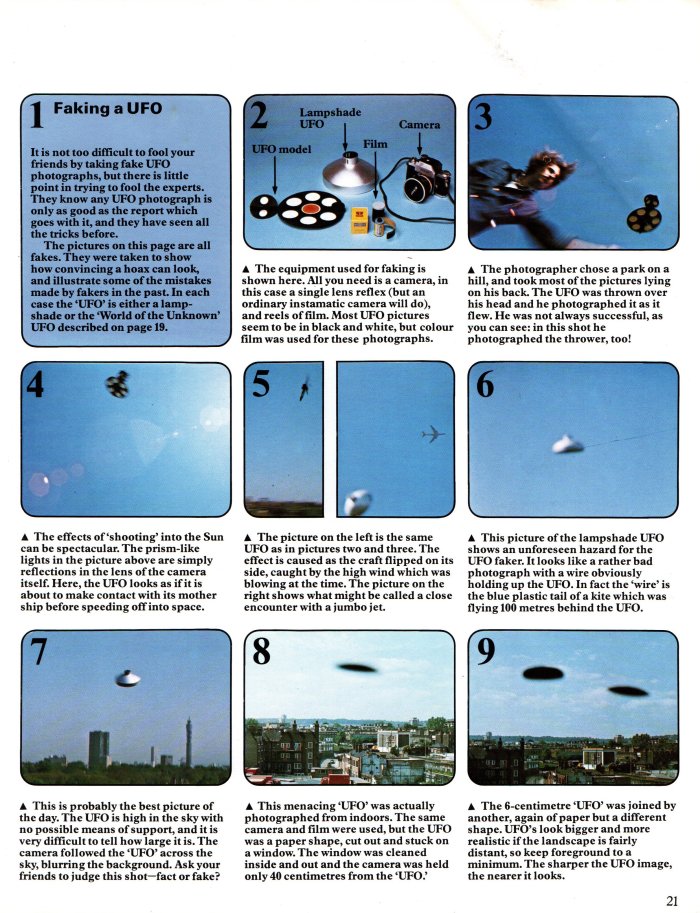 The mandate of British publisher Usborne Books was to produce beautifully illustrated children’s publications, designed and written by its in-house team. The first wave of books Usborne released in 1975—which included the popular Spycraft—had sold well, and in 1977 the company followed it up with the World of the Unknown series, a triptych that included Monsters, Ghosts, and UFO’s [sic]. In the words of David Jefferis (responsible for “art and editorial direction” for the World of the Unknown books and, later, the company’s 1979 World of the Future series), the books were “aimed at young readers, but they didn’t talk down to them, the text level being easy to understand, but not stupid.”

World of the Unknown: UFO’s appeared in bookshops the same year that the international second-wave UFO frenzy in popular culture was coalescing around the release of Steven Spielberg’s Close Encounters of the Third Kind. When the film opened in US cinemas in November, the zeitgeist was saturated with hypothetical alien visitors who, this vision of the phenomenon posited, were as benevolent as they were mysterious. UFO groups—both serious-minded and literally demented—proliferated, and hobbyist UFO hunters were even advertising UFO detectors in the pages of the specialist press.

For a book aiming to capitalize on the love of the young for the mysterious, Usborne’s UFO’s takes a surprisingly Fortean approach to its subject matter, while being careful to always leave open a small window of possibility that the craft might genuinely be the work of extraterrestrial visitors. As was usually the case with Usborne books, the illustrations were its most striking feature, and the book’s two-page spread of UFO types remains one of the more memorable visual representations of the surreal power of the Unidentified Flying Object—shiny, dreamlike shapes, unmoored from earthly drabness and floating among the clouds, pulsing with cryptic meaning.

The book repeatedly raises the principal objections to the then-prevalent materialist view of UFOs, concluding, “There is little or no hard evidence for their existence.” While this might look like a case of Usborne wanting its UFO cake and eating it, a more charitable interpretation might be that the publishers, while not wishing to forgo the payday a children’s book on flying saucers guaranteed, wished to retain something of the ethical high-ground by attempting to encourage a skeptical mindset in its young readers. The book even devotes a handy two-page spread—from its total 32 pages—to the most common everyday phenomena mistaken for UFOs. This contrast between credulity and doubt runs throughout the book, for example with the inclusion of a UFO sighting report form accompanied on the facing page by a miniature masterclass in how to fake a photograph of a UFO.

UFO’s also contains instructions on how to make your own UFO (explained in Usborne’s notoriously approximative instruction style), a look at Erich von Däniken’s Chariots of the Gods? “theories”—though cannily without mentioning the book’s author (though noting that Kon-Tiki sailor Thor Heyerdal disputed Däniken’s claim that the Easter Island heads must have required “alien” assistance), an experiment using pyramid power to preserve a rasher of bacon (which it seems unlikely any British parent of the 1970s would have underwritten), and a trip to the hypothetical homeworld of the Hopkinsville Goblin. This segment, which speaks in remarkably equitable terms of the Goblin “community,” is accompanied by a wonderful illustration of the Goblins stoically watching one of their cone-shaped ships depart the surface of their icy homeworld, warmed by its twin suns, Eta Cassiopeia A and Eta Cassiopeia B, while—in one of the many gracenotes with which the book abounds—our sun is visible in the Goblins’ heavens as a morning star.

Though clearly packed with filler—to adult eyes, at least—World of the Unknown: UFO’s remains a beautifully realized artifact, summarizing perfectly the mood of optimistic excitement that gripped the culture at the time: the feeling that humanity might actually be on the verge of making contact with alien beings. Ten years after its release, UFOs in popular culture took a decidedly darker turn, as exemplified in Whitley Strieber’s Communion. The purported “true story” brought to center stage the neuroses and paranoia that had always been inherent in the UFO phenomenon, shifting the entire concept of alien contact into altogether more alarming territory.