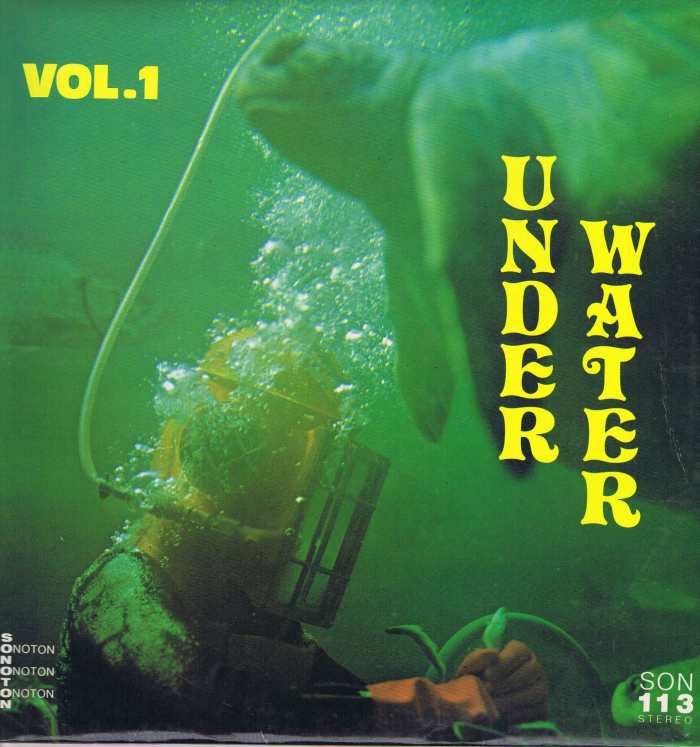 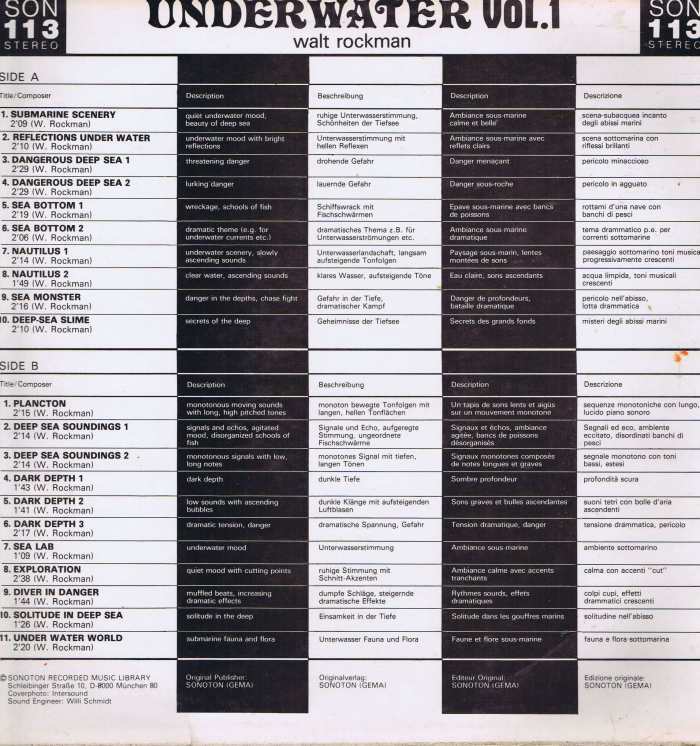 A lush selection of library and ambient music—the two often overlap—attempts to evoke the ocean in its many guises, an artistic practice that goes back in the West to the tone poems and symphonic sketches of classical composers from Beethoven to Debussy. After World War II, the orchestrations of what came to be known as exotica, a subset of lounge music, attempted to capture the enchanted South Seas for suburban Americans thirsty for fantasy and adventure. While the recently established NASA was mapping outer space and the possibility of lunar colonies, scientists and environmentalists began to explore the world’s oceans as a more practical refuge from an increasingly crowded and polluted terra firma, as well as a potential source of energy and “intraterrestrial intelligence.” The U.S. Navy’s SEALAB project, which explored the long-term viability of underwater habitats, lasted from 1964 from 1969, and marine explorer and conservationist Jacques Cousteau, whose educational films and documentary series aired on TV for three decades starting in 1966, was a household name.

Seaworthy (and space-worthy) library music—contemporary, affordable background instrumentals licensed out to film, TV, and radio producers—was soon in great demand, and not just in America. Sven Libaek’s excellent Inner Space (1973) collects ensemble music used for an Australian documentary of the same name (narrated by William Shatner) focusing on marine life, renowned Italian composer Alessandro Alessandroni produced the same year’s electronic Biologia Marina, and Alan Feanch (real name Alain Poinsot) composed several dreamy, oceanic library LPs for French label Charles Talar Records throughout the ’70s. Underwater Vol. 1 (there is also a Vol. 2) emerges from this tradition. As most production fare at the time, it’s entirely electronic: synthesizers offered a versatility of sounds and textures that, as luck would have it, were much cheaper than an orchestra or session musicians.

Notes on the back of the LP give the potential customer clues on what to expect from each track: “Submarine Scenery” will suit your “quiet underwater mood,” “Sea Bottom 2” will get you a “dramatic theme (e.g. for underwater currents etc.),” “Dark Depth 3” expresses “dramatic tension, danger,” and so on. Much of the LP is quite beautiful, moving from light to shadow and back again: shimmering jazz chords stalked by discordant drones, quick rippling tones that sound like ascending oxygen bubbles or a passing pod of dolphins, reverb-drenched major scales crisscrossed by xylophone runs. Rockman—actually Gerhard Narholz, who founded Munich’s Sonoton music library with his wife Heidi in 1965—makes innovative use of space and suspense and movement, teasing out not just his immediate subject matter but the emotions we feel upon contemplating life beneath the waves. Library music, much like B films (George A. Romero famously used selections from Capitol Records’ library to score 1968’s Night of the Living Dead), offered composers a chance to create with a spontaneity and freedom that was not possible in popular or even avant-garde music, the latter often constricted by its own self-righteous conventions and idioms.

To be honest, I might be heaping praise on 60 minutes of one-handed keyboard noodling (perhaps Narholz was ironing a shirt with the left, or frying an egg) that has become meaningful only because I’m getting old and need reminding of a time when innocence without irony was possible; because that’s what I use to steel myself against the perpetual tolling, frivolous or otherwise, of apocalyptic doom. For me, and maybe for you, these mood tracks are like an aural Rosebud, a childhood music box winding down in a long-sunken cathedral.