The loss of filmmaker Nicolas Roeg at the age of 90 in November was deeply felt by cinephiles. Roeg was one of the most singular voices in movies for much of the twentieth century, influencing directors as varied as Christopher Nolan and Steven Soderbergh. When considering his legacy, it’s worth highlighting his most accomplished decade: the 1970s. A period defined by Star Wars, The Godfather, and Taxi Driver, Roeg stands out for his dedication to innovative, and even inexplicable, style, and for his refusal to adhere to or acknowledge Hollywood standards.

Beginning with his directorial debut in 1970, Performance, he staked his claim on the decade’s penchant for disorientation, establishing his disjointed style early on. Then came Walkabout in 1971, Don’t Look Now in 1973, and The Man Who Fell To Earth in 1976—arguably one of the most consistent and celebrated runs in cinematic history. Editor Graeme Clifford, who worked with Roeg on Don’t Look Now and The Man Who Fell to Earth, once said that Roeg treated the former film as his “exercise in film grammar,” although his films never feel like overly-mediated, intellectualized endeavors. Instead, they feel exciting, occasionally cruel but always exhilarating ventures into cinema’s future.

Roeg started his career as a camera operator in London, until director David Lean took notice of his skills as second-unit cinematographer for 1962’s Lawrence of Arabia. Lean hired him as cinematographer for Doctor Zhivago (1965), but the pair clashed and Roeg was fired—one can surmise that their creative inclinations were mismatched, considering Lean’s establishment and perfectionist epic-scale spectacles. From there, Roeg served as cinematographer for films as varied as the sadistic chill of Roger Corman’s The Masque of the Red Death and the startling colors of François Truffaut’s sullen version of Fahrenheit 451. Soon enough, he turned to directing, perhaps inevitably.

Many have struggled to define Roeg’s style, partly because each film is so distinct, each one an inimitable attempt to hijack and transform film convention to his own desires, eschewing filmic rules to tell unusual stories, but always with strong emotion. His films, particularly those of the ‘70s, were incomparably daring and, often, uniquely erotic. Roeg’s approach to romance was unconventional but highly effective, like most of his work. The most discussed example is the intimate scene of Donald Sutherland and Julie Christie in Don’t Look Now, long-rumored to be unsimulated primarily due to its startling authenticity—but each of Roeg’s films from this period simmers with baroque eroticism, from Walkabout’s sexual awakenings to David Bowie’s alien beauty in The Man Who Fell to Earth, which helps to reveal the tragedies of humanity.

Performance, co-directed with Donald Cammell, opens in typical Roeg fashion with a sequence cross-cut between a naked couple having sex and a seemingly disconnected event (a man being driven around in a fancy car). The following ten minutes seem to be specifically designed to turn off viewers by incessantly cutting between different locations, often mid-sentence and seemingly completely out of temporal chronology, supplemented by random noises and shouted words, until our protagonist Chas (James Fox) says to another character, perhaps standing in for a producer talking down to Roeg himself, “You know, I don’t think I’m going to let you stay in the film business.” (You can see why, perhaps, Warner Bros. held onto the film for almost two years before releasing it; they were expecting something more like A Hard Day’s Night).

Performance is deliberately difficult to follow, but it’s about Chas being forced to hide when his gangster boss decides he’s more trouble than he’s worth and wants him killed. He ends up in an ex-rocker’s basement apartment, and descends into a spiral of nonsense with Turner, the odd musician (played by Mick Jagger), and his two live-in girlfriends. He ends up being tricked into taking magic mushrooms, and they go on a fevered adventure of experimentation with identity and appearance, literalizing the film’s title and theme as they try on different personas. It climaxes with Jagger performing a song, “Memo from Turner,” as he instructs the gangsters looking for Chas to strip naked. Jagger is excellent in the film, gyrating and sulking mysteriously in equal measure, embodying the message of the countless ways we perform in our lives every day. Performance is a trippy and inventive film that threw British cinema for a loop, particularly once it became popular on the cult circuit by the late ‘70s. 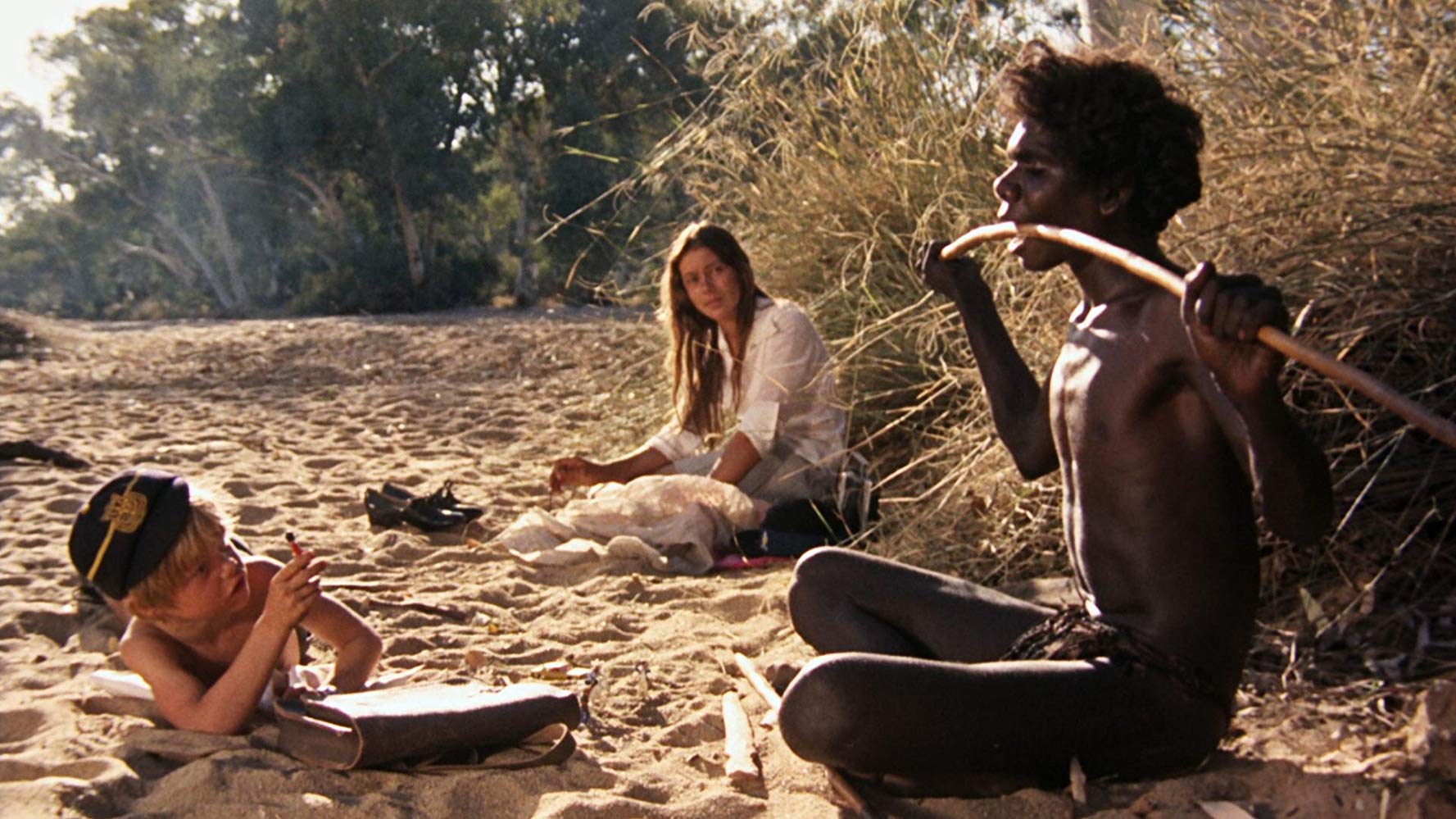 Roeg’s true solo feature debut was Walkabout, a film that has been situated alongside movies like Wake in Fright (1971) as helping to kickstart the Australian New Wave, as it tells the story of two white children stuck in the outback who get help from (and share some somewhat uncomfortable sexual encounters with) a teenage Aboriginal boy. Like most of Roeg’s most affecting films, Walkabout’s power lies not necessarily in what it depicts (which is rather familiar ideas about death and the ills of so-called civilization), but how it is depicted. As others, including Roger Ebert, have stated, the film is really responding to the human struggle of how we communicate with each other, which seems to be a preoccupation of Roeg’s in all his work.

This theme, the work it takes to communicate, comes through most forcefully in what is perhaps his most acclaimed film, Don’t Look Now, based on a 1971 short story by Daphne du Maurier and starring Donald Sutherland and Julie Christie as a couple (John and Laura) who lose their daughter and move to Venice, where they are told by a clairvoyant woman that their daughter is attempting to contact them and warn them of danger. The film is well-known for its Roegian style and imagery and its supernatural impact, but also for its handling of grief and the struggle between John and Laura to remain an intact unit. It has been called “impressionistic,” as has Roeg’s work in general, which is close but not quite accurate. Certainly influenced in part by the French New Wave (including his collaboration with Truffaut), his style instead possesses an associative affect, often purposefully confusing viewers with intercuts and temporal incoherence, but also establishing visual and aural patterns and motifs with the same techniques to help make the film flow with emotional sense. In other words, Roeg’s fragmentary approach is perfected here to illustrate the film’s self-fulfilling prophecy, its psychological truth. 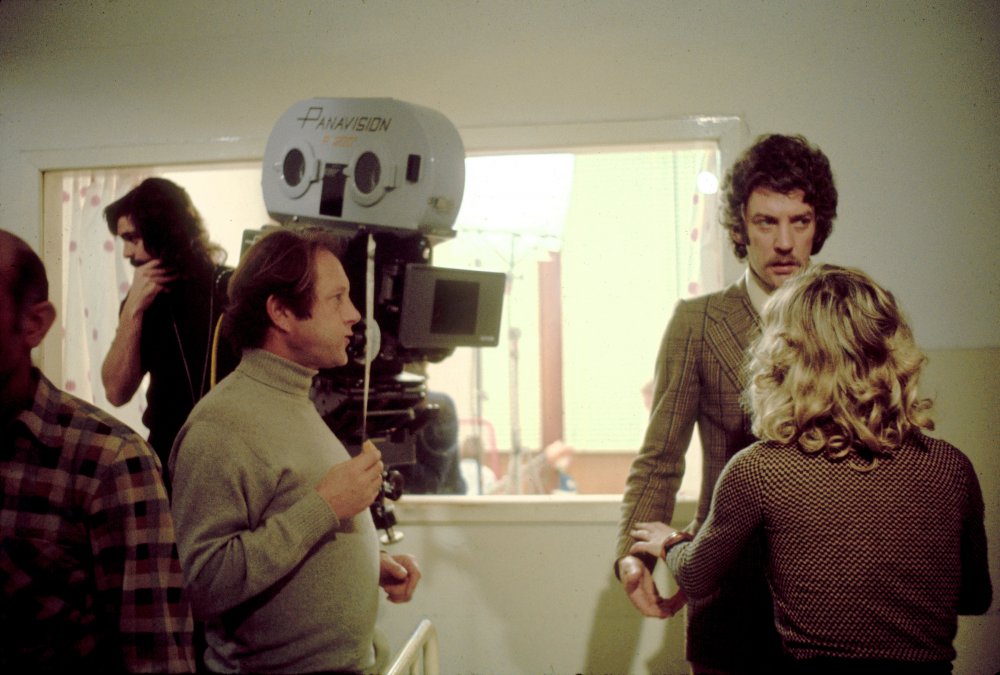 These films are free-thinking in every sense, full of non-sequitur scenes and scrambled timelines, frightening in their depictions of grief, anxiety, loss, and alienation. The names that define ‘70s cinema typically include Scorsese, Coppola, and Kubrick, but Roeg deserves to be alongside them, not only for the skill and execution of his movies, but for the influence he has had on filmmaking, including those directors, like Darren Aronofsky and Luca Guadagnino, who often work within the unexplainable. He understood the paranoia and cynicism of the ‘70s and translated it into his own warped vision, such as by taking advantage of Venice’s labyrinthine layout in Don’t Look Now or Tommy’s malaise at all the TV screens incessantly flickering their nothingness at him in The Man Who Fell to Earth. Roeg’s style, often featuring manic editing and montages that complicate rather than simplify, can be abrasive, but the point is always to interiorize the spectator into the experience, like the chaos of Performance paralleling its exploration of identity. These are, occasionally, the reckless decisions of a director unsatisfied with his resources and with his industry, parlayed into films wracked by obsession and liberation (which perhaps reached a fever pitch with Bad Timing in 1980). But they are also the choices made by someone concentrating on what the filmgoing experience can and should be like, experimenting with ways of challenging audiences yet never losing sight of the medium’s visceral potential, always looking for new ways of seeing.

Roeg’s elliptical style has been called dated in recent years, a throwback to, say, drug-addled and misguided takes on Godard; but this is to misunderstand him and the meaning behind his direction. His contorted narratives and haunting mosaics all serve a poetic goal, blending harsh and gentle approaches to find new ways of communicating with film, or ways to transform our expectations of time and space. Roeg’s handling of the eerie and the uncanny were matched only by his compassionate characters, all assembled into stories tapped into his fragmented sense of twentieth century life. We see in his films how the modern world suggests opportunities for greater connection, but in practice only enforces and encourages isolation—a feeling that seems prescient now. To some extent, though, his characters always do all they can to push through that cosmic governance, struggling to relate and unite, even when it seems futile. As Mary-Lou (Candy Clark) tells Bowie’s alien, “You know Tommy, you’re a freak. I don’t mean that unkindly. I like freaks. And that’s why I like you.”

Jake Pitre is a writer and academic based in Ottawa. His writing has appeared in Pitchfork, The Globe and Mail, Polygon, Lapham’s Quarterly, The Outline, and elsewhere.