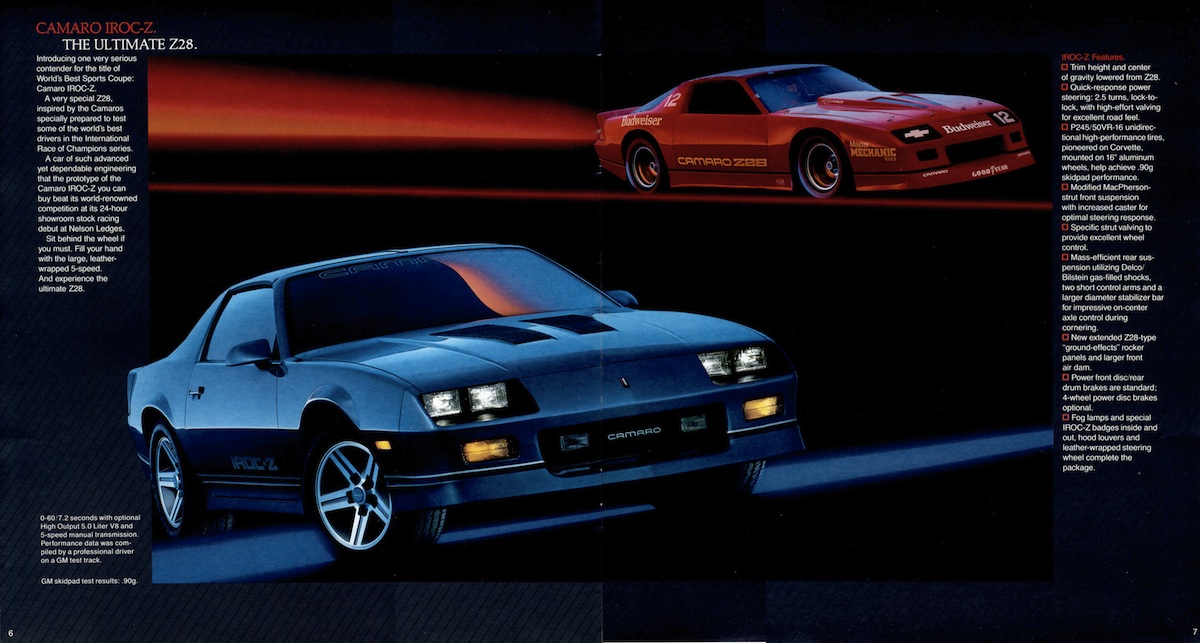 Introduction of the IROC-Z package from Chevy Camaro brochure, 1985 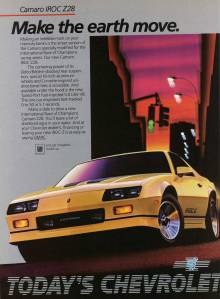 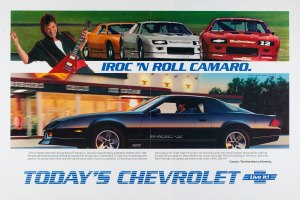 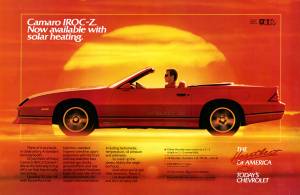 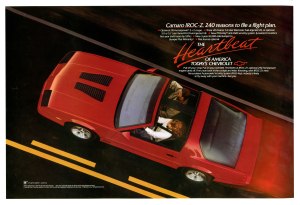 During my late-’80s adolescence on Boston’s North Shore, no automobile better represented a kind of aspirational working-class freedom than the IROC—so much so that it became a broad stereotype and cliché, even among marginally self-aware Italian-Americans such as myself. The Chevrolet Camaro IROC-Z’s brief and radiant history is the result of a confluence of trends in the American auto industry, world motor sports, marketing and advertising in print and on television, and the larger sphere of late Reagan-era American popular culture.

The Camaro model was introduced in 1967, as was its cousin, the Pontiac Firebird. The Chevy Camaro’s third incarnation entered the world in 1982, during Roger Smith‘s infamous tenure as chairman at General Motors. Smith navigated GM through a decade where the Japanese auto industry began its sudden and explosive growth in the American market; his attempts to “modernize” GM’s manufacturing chain (mostly through matching Japanese automakers’ dedication to increasing automation) would result in the devastation of American cities and towns that had depended on GM for their livelihoods. Smith’s attempts to unify the petty divisional fiefdoms within GM would also meet with resistance from the company’s notoriously hidebound corporate culture. Each division was trying to preserve its own historical brand in order to survive in the hyper-competitive 1980s automobile market, and none more so than Chevy. Chevrolet had, since the postwar years, traded in on a markedly patriotic advertising iconography, and was traditionally the home of the quintessential American muscle cars with its longstanding trademark small-block V8 engine. The new Camaro was a muscle car for the ’80s, sleek and on the cutting-edge of automobile design, drawing from Chevy’s longstanding relationship with the auto racing world.

The Camaro IROC got its name from the International Race of Champions, a motor racing series founded in 1974 and originally intended to bring together the best drivers from all kinds of car racing: NASCAR-style stock cars as well as European-style open-wheel racers. Eventually, IROC would be dominated by stock car drivers, but in the beginning Indy-car drivers such as Bobby Unser, Al Unser Jr., and Mario Andretti would take home the championships. Chevrolet dominated the contest in its early years, with Camaros winning the race in 12 out of the first 13 championship seasons. One could see the impulse behind the foundation of IROC—bringing together the best in a sport to compete on equal ground—as being inspired by similar 1970s-era league “mergers” such as the foundation of the modern NFL out of the NFL-AFL merger, the ABA being swallowed up by the NBA, and the NHL’s gobbling up of competitors such as the WHA. With this kind of hype among motor sports enthusiasts, along with Chevy’s success in the series, came the opportunity for Chevrolet to brand its new line of Camaros with the IROC name. Camaro’s high-performance Z28 model, introduced in 1982 as one of the Camaro’s initial three designs, had won Motor Trend‘s coveted Car of the Year honors. In 1985, Chevy offered an options package for the Z28 named after IROC that included powerful, stock-car-inspired features.

The marketing of the IROC merged all these disparate threads; namely, combining the Chevy reputation for a certain kind of American power and freedom on the roads with the high-tech features that came thanks to IROC’s racing legacy. The early “IROC and Roll” slogan hits that all-American sweet spot, but when Chevrolet debuted its brand-wide “Heartbeat of America” campaign in 1986, the insistent heartbeat-driven jingle dominated IROC’s television ads from then on. The IROC could go from racing helicopters during the day to cruising down a steamy, neon-lit street at night. The convertible model was introduced in the 1987 model year, the T-top fitting the IROC’s reputation as “the Camaro that thinks it’s a Corvette.”

Chevy ceased offering the IROC feature package in 1990, with Chrysler’s Dodge Daytona taking on the label and IROC sponsorship. Dodge also took over as IROC champion for the next six years. With the end of the Camaro IROC came the end of an era of power, sophistication, and control for American-designed and made pony/muscle cars; Japanese models rushed in to fill the “street racing” niche throughout the decade and beyond (rumors have it that the Camaro itself will be discontinued in 2022, ending over a half-century of American automobiling history). But every now and again in the ’90s, if you hung out on Revere Beach or maybe down the Shore, among those cars with their Italian flag decals and neon-lit undercarriages, you might see a classic IROC among the Hondas and Mazdas, its distinctive lines and headlights hearkening back to the very final days of American sports coupe dominance.