Captain Scarlet and the Mysterons (1967-1968), the sixth television series produced by AP Films/Century 21 to be filmed in “Supermarionation,” is a blitzkrieg of old school science fiction action that touches upon moral and psychological ambiguity within the explosive, action-driven framework that was second nature to the production team at this point. Who the real enemy is in Captain Scarlet is a question the series dabbles in without directly asking it. Is it the Devil-like Mysterons, whose omnipotent and omnipresent capabilities threaten to turn the Earth inside out? Or is it Spectrum, whose trigger-happy agent Captain Black unwillingly kicks the “war of nerves” into gear?

Captain Scarlet and the Mysterons tells the story of world security organization Spectrum’s battle of wits against the Mysterons, a cryptic alien race that had been hibernating on the planet Mars until an accidental act of destruction on the part of key Spectrum agent Captain Black provokes them into declaring war on the Earth. Armed with the powers of “retro-metabolism,” their ability to destroy anyone and anything and replicate them/it for their own ends is gleefully and violently exploited throughout the show. Captain Scarlet becomes a Mysteron agent during the events of the first episode, but eventually both regains his human persona and retains the Mysterons’ superpowers, becoming Spectrum’s greatest weapon against the scheming aliens. Captain Scarlet slyly avoids exploring this rather human fallout of the war of nerves, a campaign of terror whereby the Mysterons routinely target important people, places or events throughout the world, placing their replicated agents into the heart of the action.

In a lesser show, this would be seen as a lazy cop-out, a senseless diversion from the show’s larger themes that reward endless viewing and inspection on the part of the audience. Yet in the hands of series creators Gerry and Sylvia Anderson, it feels as if Captain Scarlet purposefully moves beyond the traditional expectations of incorporating such personal tragedies, and instead strives to deliver an experience that transcends our physical and cerebral definitions of what it means to be human. This philosophical attitude separates the show from the otherwise optimistic fare of previous Supermarionation sci-fi action.

The largest case for Captain Scarlet’s posthuman identity is the insatiable bloodthirstiness of the Mysterons. As part of their campaign of terror, the Mysterons flex their muscles by routinely murdering and replicating human beings from all walks of life, transforming them into Mysteron agents—a metaphor that invokes, on purpose or not, the real-life workings of occupation and colonialism. These replicated beings act as alien sleeper terrorists, designed to slip in and out of situations disguised as their human counterparts, yet embedded with an innate loyalty to the Mysteron cause. More often than not, either through quick-witted thinking, Captain Scarlet’s indestructible prowess, or sheer script convenience, Spectrum is able to prevent total catastrophe.

Captain Scarlet avoids diving into what effect Mysteron agents have on the people they actually replicate. Army generals, pilots, journalists, fashion models, doctors, garage workers—all fall under the Mysterons’ spell, embodying a very literal definition of the posthuman as physical, alien-produced copies of human beings, armed with a wildly different functionality than “regular” human beings. In episodes “The Mysterons” and “Traitor,” we see how Mysteron agents are capable of acting as living bombs, emitting gusts of smoke before detonating. But what becomes of the lives these people, subsumed by their malevolent replicas, unintentionally left behind? Do they have friends and families who would no doubt be scarred at the idea of invisible aliens killing and reconstructing their loved ones, perversely exploiting the image of the dead for their own ends?

We do see this idea bubble to the surface, on occasion. In “The Launching,” a Mysteron attempt to destroy the maiden voyage of the vessel President Roberts is foiled in heroic fashion by Captain Scarlet. The Mysteron agent-of-the-week, journalist Melvin Brand, is a close friend of the Vice President of Trans-Pacific Shipping, who’s launching the vessel. Highlighting the covert nature of the Mysterons, the episode also marks a rare occasion in the series when humanity comes face to face with the Mysterons’ capabilities. When Scarlet manages to shoot and kill the Mysteron replica, the Vice President can only stare over the body and stumble over the idea that it isn’t that of his friend, but of an alien entity beyond his comprehension.

The idea is scaled up in “Treble Cross,” a well-constructed classic from the show’s twilight that asks the endlessly intriguing question: what would happen if a Mysteron target who gets murdered and reconstructed was brought back to life? Experimental test pilot Major Gravener comes under the Mysteron knife early on in the episode, but the story’s delightful subplot emerges when two passing doctors recover his body and manage to resuscitate him. Made aware of the Mysteron Gravener’s villainous intentions to hijack a military jet armed with a nuclear warhead, Spectrum hatches a cunning plan to deceive the Mysterons into thinking the human Gravener is their own. Major Gravener’s reaction to being told he’s been copied by an alien menace is: “Well, apart from trying to assimilate all this, I’m fine.” The episode unfortunately doesn’t allow the time for in-depth reflection of what Gravener might actually feel about having his body exploited by unseen hands and, to some degree, by Spectrum itself.

These precious few glances into the manipulative machinations of the Mysterons are kept at arm’s length to avoid spoiling the overall otherworldly atmosphere of the series. By detaching the emotional entanglements that an event like the war of nerves produces, Captain Scarlet and the Mysterons absolves responsibility for any tangible depth in its characters. In the hands of any other show, this would be unforgivable; yet here it makes perfect sense. Scarlet himself reflects the show’s somewhat cold-hearted mindset thanks to his transition from regular Spectrum agent to Mysteron tool of war to, finally, Spectrum’s greatest asset in the fight against the Mysterons. In “Winged Assassin,” the consequences of Scarlet’s Mysteron-occupied mind is cautiously explored without really being resolved. Save for the heat of the flames on the back of his neck in the aftermath of his own assassination at the hands of the Mysterons (an engrossingly tangible, and sadistic, bit of detail), he remembers nothing until his reversal from Mysteron agent back to Spectrum Captain. Bizarrely, everyone else on Cloudbase, Spectrum’s airborne headquarters, appears to have undergone selective memory loss too.

When discharged from Cloudbase’s medical bay, he receives a warning from Colonel White, the commander-in-chief of Spectrum, that the consequences of all of this may not be fully understood, yet he’s placed back on duty, and everyone aboard Cloudbase promptly overlooks the fact that they have a failed Mysteron infiltrator working for them. Indeed, everyone proceeds to talk to Scarlet as if he’s the original. “It’s great to have you back on duty, Captain Scarlet,” Captain Blue reflects joyfully. But this Captain Scarlet was never on duty. He ends up retaining the superhuman abilities that come with reconstruction, yet fails to recount any of his actions during his antagonistic, posthuman state. What wonders—and strategic advantages—those memories would have provided to Spectrum. 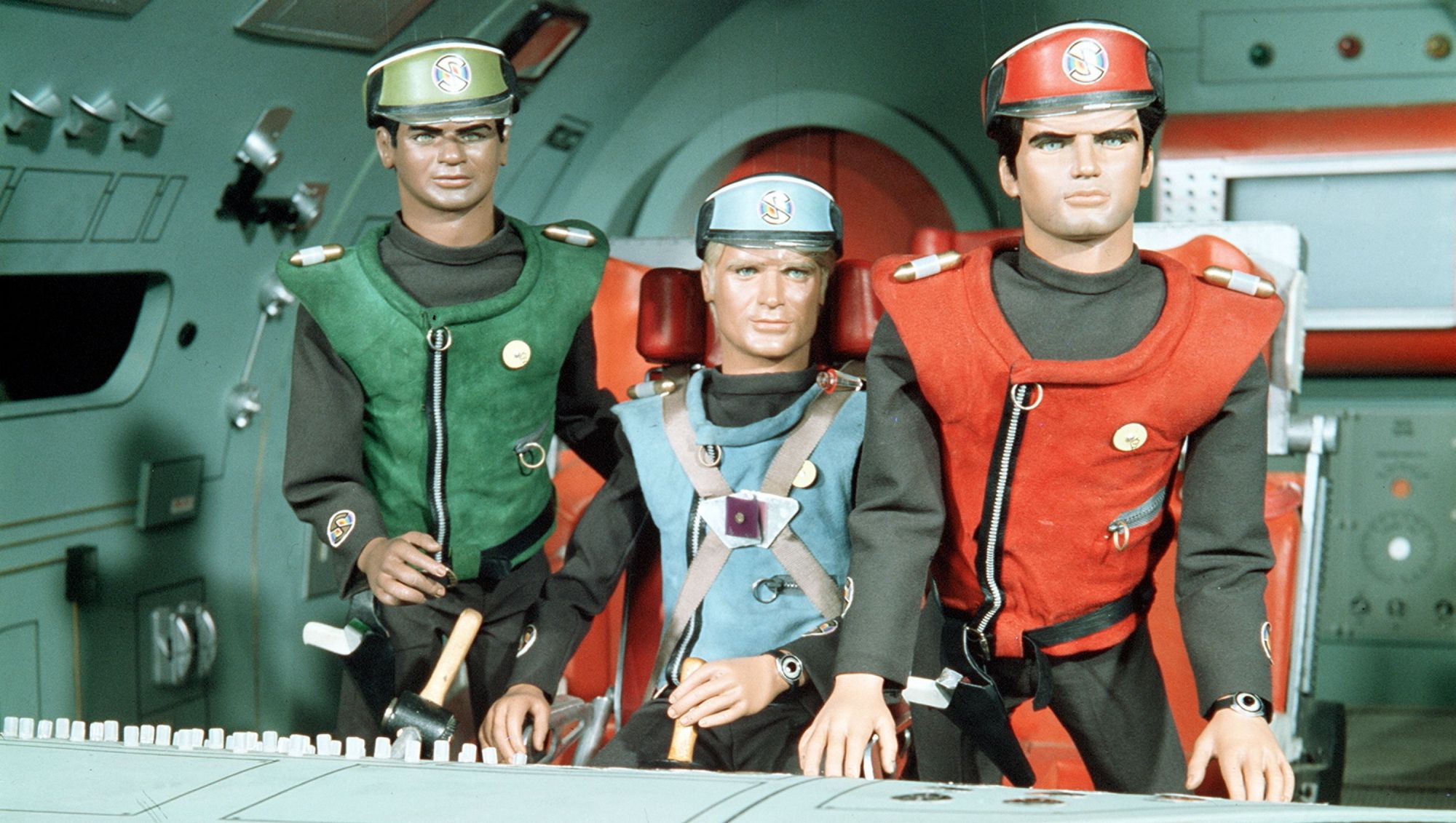 Why, then, does Captain Scarlet and the Mysterons not make more time for these concepts that lend themselves endlessly well to deep levels of introspection? Probably because the Supermarionation wonderland of Century 21 had already cemented its reputation for propulsive puppet programs defined by action and spectacle. There was commercial pressure to continue to do so. And yet, despite the surface-level antics being the chief draw into the dark-hearted world of Captain Scarlet and the Mysterons, it’s the deeper ideas and concepts that resonate—even though they may not have been purposely planted there. When I interviewed Captain Scarlet writer/director Leo Eaton and asked about the overall darker edge of the show compared to Thunderbirds, he gave a disarmingly and unassumingly simple response: “You know, it’s weird, people read things into things after the event. We didn’t think of it as particularly dark. It was fun, it was different.”

He may not have been talking about a specific idea or concept found in the show itself, yet his words encapsulate the working attitude towards the show. The fact that the series at least dips its toes in posthuman waters suggests a maturity and ambition on the part of its creators and writers that perhaps wasn’t there in past shows. Gerry Anderson was a keen advocate for giving each of his creations its own flavor, and was careful not to repeat too much of what had come before. Whether the edgier, philosophical undertones of the series were an intentional move or a happy accident, the result was a throbbing dread—who would be murdered and body-snatched in this episode—that elevated Captain Scarlet and the Mysterons above previous Supermarionation productions.

Fred McNamara spends an immeasurable and unhealthy amount of time overthinking indie comics, cult television, and retro sci-fi. He co-edits the superhero/indie comic book hub A Place To Hang Your Cape. He’s also the author of Spectrum is Indestructible, the unofficial celebration of Captain Scarlet and the Mysterons. He’s game for watching anything involving puppets.