The ever-widening division between social classes has always been popular fodder in film and television. It seems as though few films that address class disparity can escape at least some oblique commentary that casts the wealthy elite in a negative light. From the early days of cinema with Erich von Stroheim’s Greed (1924) and Frank Capra’s It’s a Wonderful Life (1946) to Wall Street (1987) to the brutal satire American Psycho (2000), film has rarely let the rich off easy. But 2019 turned hating the rich into a blood sport, with Parasite and Hustlers both finding new ways to strike back at the one percent. The year saw a remarkable amount of media that didn’t just criticize the structures of inequality that allow the rich to remain in power, but specifically targeted beneficiaries of inherited wealth.

The ultra-rich are frequently depicted at best as self-absorbed, entitled children who can’t do a thing for themselves, and at worst as immoral sociopaths. This presentation is unique in that it seemingly transcends political background. We’ve seen plenty of films that denigrate the policies of one party or another as being detrimental to the well-being of the general populace, but, according to many 2019 films, politics are a secondary factor in this criticism of the wealthy. They instead posit that there is a certain amount of wealth that one can acquire, particularly if it is inherited, that precludes moral behavior. Simply put, there’s no such thing as a good billionaire. That this is a message we see repeated again and again over the course of 2019 suggests an evolution of political commentary in popular culture.

The depiction of dynastic wealth over the past few decades has allowed the ultra-wealthy to take on a certain aspirational quality. Dynasty, Dallas, The O.C., and Gossip Girl are all examples of shows that portrayed this sort of vast wealth as a much envied lifestyle, where existence was not only easier and more glamorous but vastly more interesting. Not so since the Great Recession, and especially not so since the election of Donald Trump, himself the product of his father’s wealth. Many of the films and television series we’ve seen this year are openly contemptuous of the sense of entitlement characters who inherit wealth have, painting them as oblivious farces of the upper class, worthy of little more than derision. In Ready or Not, the family members of a board game dynasty are so convinced that they alone deserve prosperity that they’re willing to brutally hunt down and murder anyone who threatens their supposed birthright. The reveal of this violent action as a mechanism for their very survival reflects how they view the possession of wealth: if they can’t maintain their high social status, they may as well be dead.

In the first two seasons of HBO’s Succession, the overarching question is who is going to take control of the massive media conglomerate Waystar Royco in the wake of its founder Logan Roy’s (Brian Cox) declining health. Regardless of whoever may have the most experience or be the most temperamentally fit to run such an organization, the Roy children are the only ones who are seriously considered for the position. It’s a race for one of the most powerful jobs in the world run by only three potential contenders. And the behavior exhibited by each of the Roy kids (excluding Connor, played by Alan Ruck) shows how much they think they’ve genuinely earned the largely ceremonial positions they’ve been given within the organization. The same idea stands in HBO’s The Righteous Gemstones, the sillier version of Succession, where characters frequently declare “I’m a Gemstone” as the only justification as to why they should be allowed to do things or be given special privileges. We see an extension of this in Knives Out, where an entire family of freeloaders, all financially problematic in their own unique ways, cannot fathom their father’s fortune being given to anyone outside of the family. In their minds, they have earned this money, though by what means it’s hard to say.

These narratives fundamentally subvert the myth of the self-made man, which is especially prevalent in Knives Out. Each member of the Thrombey family could not have achieved success without significant financial help from their father, Harlan Thrombey (the actual self-made man, played by Christopher Plummer). Linda (Jamie Lee Curtis) is a real estate mogul, but she never would have been able to start her company without her father’s initial funding. Walt (Michael Shannon) serves as CEO of his father’s publishing company, a position he was handed not through merit but because he was the oldest living son and first in line to the throne. And even then, despite his title, he’s not trusted with the power to license adaptations of his father’s work, which is where the real money is. Joni (Toni Collette) is a Gwyneth Paltrow-esque lifestyle guru, entirely dependent on an allowance from her father-in-law, and Ransom (Chris Evans) has nothing to bank on in life except for an anticipated future inheritance.

Based on the comments they make about one another to detectives during the investigation of Harlan’s unusual death, they seem to know that every member of the family (except themselves, of course) owes all their success to dad. But they consider themselves to be inherently deserving of wealth not because of the things they have done, but because of their surname. If this is their logic, it only stands to reason that if there are certain people who are entitled to good fortune by their very blood, so too there must also be people who are inherently undeserving. After all, if they were able to make something of themselves (which they truly believe they have done), there must be something wrong with those who can’t. It’s galling to see people extol the virtues of a meritocracy when they owe all their success in life to an accident of birth, and it highlights both the hypocrisy of this type of upper-class thinking as well as the mental gymnastics required to perpetuate a certain social order as they perceive it. 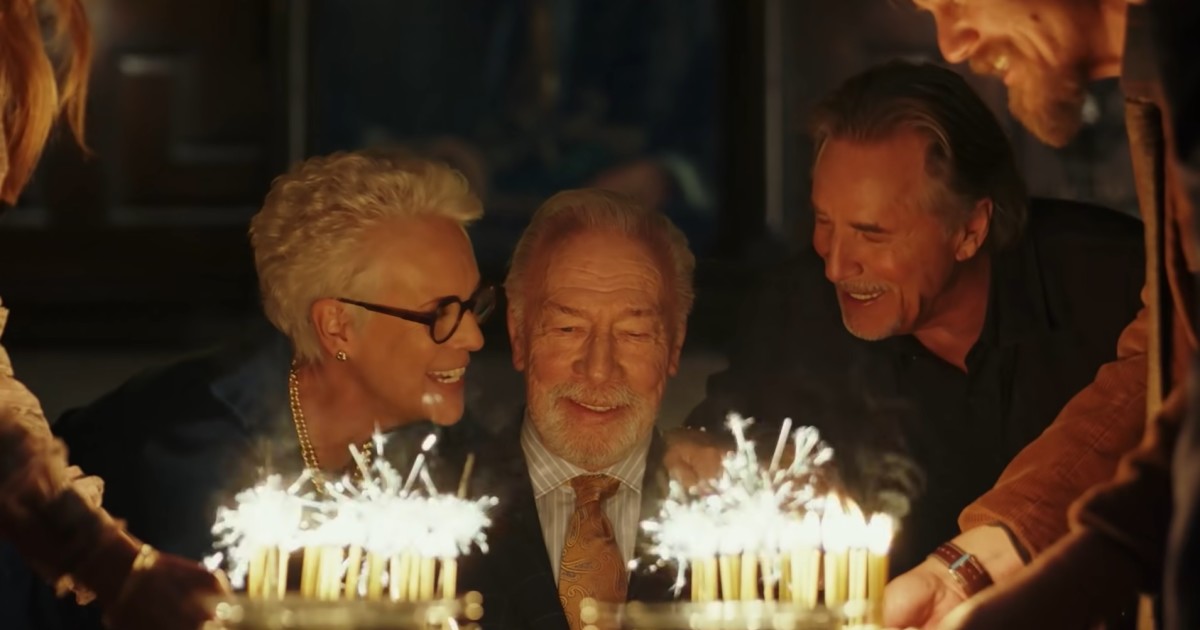 We find the meritocracy myth in Succession as well. Where Kendall and Roman are certainly aware of the fact that they would not have their lofty positions within Waystar Royco if they weren’t part of the family, daughter Siobhan chose instead to work in politics, which allows her the luxury of believing she got her job on her own merits. She’s shrewd and calculating, so she may have done well on her own, but one would have to be naive to ignore the role of her father’s influence in her career progression, as well as the appeal it would have for a politician to have an “in” at one of the world’s largest news outlets.

All of this is interesting, but not necessarily unusual for films and television shows that are critical of the ultra-rich. What is novel about the media released in 2019 is that it doesn’t seem to care whether the wealthy people in question self-identify as liberal or conservative. In the eyes of these filmmakers, the upper class is apolitical, because it has no primary political conviction other than maintaining wealth. Knives Out takes aim at the more conservative Thrombeys with a particular relish (they all insist that Marta is like family, yet none of them can remember which country she comes from, and the way that Walt forces her into a dialogue about immigration is unreservedly cruel), but it also suggests that the liberal members of the family are just as bad. No matter how much they signal a sort of performative “wokeness,” when push comes to shove and money is on the line, their loyalty is to their class, not their political beliefs. Joni is the stereotypical upper-class white liberal who knows how to say all the things that sound progressive, and her daughter Meg attends a left-leaning liberal arts college. But the pull of their inherited wealth and attachment to their class is so strong that they willingly attempt to manipulate a lower-middle-class immigrant into giving up an inheritance that is by rights legally hers just because—they somehow deserve it more? Even without their inheritance, they will still be able to lead a lifestyle well beyond the reach of most Americans, but they believe that they deserve their father’s house, his money, and the right to profit from all of his literary works. We see a similar situation play out in Succession with Siobhan, who chooses to work on a Democratic senator’s presidential campaign and by all accounts supports left-leaning politicians. But despite her personal political inclinations, she reliably acts to protect Waystar Royco, and by extension her own financial interests.

This very specific argument against the wealthy—so repeatedly on screen in 2019, not to mention Parasite‘s unprecedented run at the 2020 Oscars—is a reflection of a growing awareness that casts the ultra-rich as the true cause of our massive class divide, suggesting that those wrapped in power and privilege have pitted the rest of us against each other so that we’re too busy fighting for our lives to realize we’re being manipulated. Of course, it’s ironic when you think about the fact that these hyper-critical narratives are being bankrolled by and make a massive profit for the studios, which are themselves owned and operated by the wealthy class of people these films denigrate. The same applies to the mostly wealthy actors who play the wealthy characters. The Righteous Gemstones and Succession have the added effect of highlighting the misdeeds of large media empires, which one could assume would be a particularly unpalatable commentary for HBO, itself part of a massive media empire. Does this high-powered, ubiquitous corporate infiltration dilute the potency of such narratives? Regardless, that they exist at all showcases a shift in thinking that redirects anger towards those who actually hold real power and, worst of all, those who have done nothing to earn it.

Audrey Fox is an ex-film student, which means that she prefers to spend her days in the dark, watching movies and pondering the director’s use of diegetic sound. She currently works as an entertainment writer, joyfully rambling about all things film and television related.