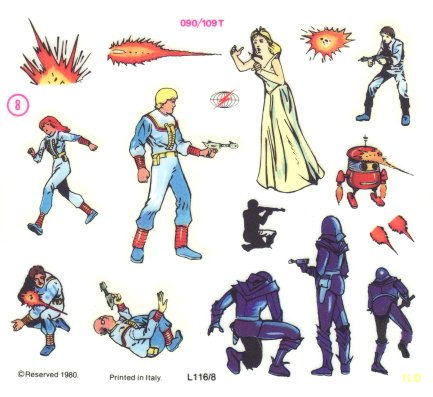 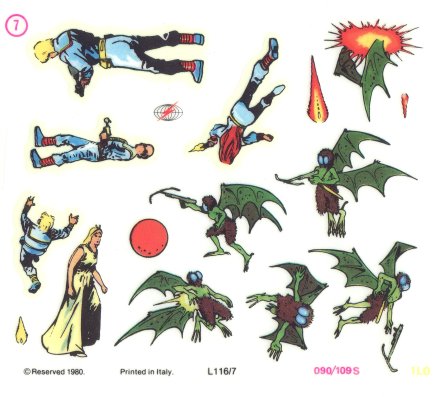 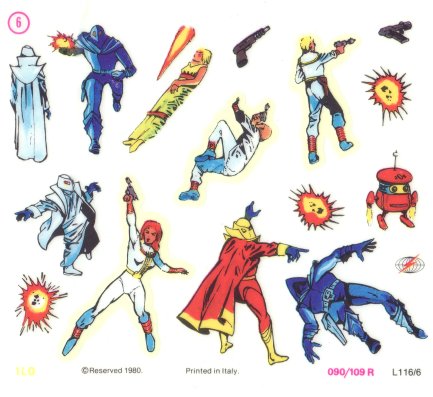 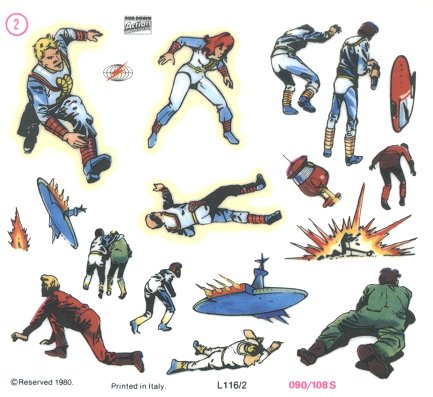 A favorite gift of British nanas, uncles and aunts of the 1970s, transfers—like coloring books—inhabit the deadening overlap between creativity and restriction. As liberating as they always looked while still in their packets, once out on the kitchen table, doing transfers frequently turned out to be a depressingly uninspiring activity. Not so Thomas Salter and Letraset’s Space Adventures, which were rare in that their genuinely engaging vistas, full of odd detail and exciting perspective, were the main attraction, and the transfers themselves merely the pretext.

No matter how lofty its pretensions to didactic meritoriousness, it was a rare toy manufacturer of the second half of the 1970s who was righteous enough to resist the lure of millions of Star Wars-crazed children desperate to throw their pocket money at anything vaguely resembling a Jawa. Proof of this is that even Thomas Salter, the Lutheran-presenting Scotland-based toy producer famous for its worthy educational products, did a deal with the zeitgeist and went into business with dry-transfer giant Letraset to crank out its own space trash artifacts. And what lovely space trash artifacts they were: ten panoramas of a world poised between old-fashioned Alex Raymond-ey pulp (complete with giant clipper-equipped robots) and the post-2001 aesthetic of technologically imposing starships with ripped-off Y-Wing cockpits. The “plot”—I use the quotations advisedly, given its unintelligibility—concerns a space war of some kind in the year 2150, with on one side Princess Haiti, Captain Meteor, Professor Purbeck, and obligatory cute robot GRUD (Ground Receiver Understanding Device, whatever the fuck that means), and on the other a baddie called Swart, assisted by the Bat People. Only the transfers are credited as being printed in Italy, but to judge by the odd grammar and phrasing of the short synopses featured on each packet, they too were hastily cooked up over a heavy lunch in a trattoria somewhere in the vicinity of the Sodecor factory, a subsidiary Letraset had founded in the far north of the country.

Unreflective nostalgia is bad for us—on that, I hope, we can all agree. When scratching the itches of our youthful loves stops being an occasional frisson and becomes an obsessive way of engaging with reality, reactionary infantility is around the corner. But we have to be careful not to throw out the beautiful baby along with the rancid nostalgia bathwater: because on their own terms—compromised, venal and, yes, often childish—some of the ephemera of childhood does actually possess a bit of genuine beauty. White Squadron Space Adventures is just that: a kind of strange, modern-day stations of the cross that, in its puerile, cash-grubbing way, evokes more profound cosmic awe than the CGI phantoms thrown endlessly at us today—and, more important, inspires far more desire to actually pick up a pencil and create something.