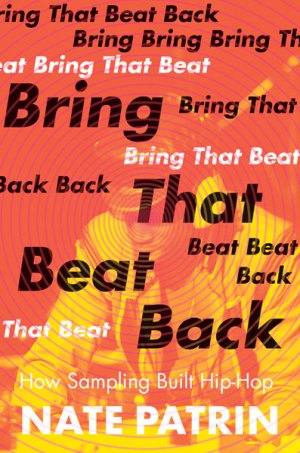 Bring That Beat Back: How Sampling Built Hip-Hop
By Nate Patrin
University of Minnesota Press, 2020

It’s practically impossible to imagine popular music in the year 2020 without considering the central role digital sampling now plays in making beats and reshaping melodies. It’s part of the very backbone of today’s music production. Whatever vogues that studio production wizards employed back in the day to find and engineer that perfect take, sampling has proven itself a wholly different animal. Constructing a brand new edifice out of building blocks sourced from musicians of the past is now so de rigueur in popular music as to be almost banal. But a few decades ago, this novel method of musicianship was denigrated, deemed dangerous, compared to outright theft, and fraught with vast social and economic ramifications.

Ultimately, all musicians who use sampling in a contemporary context have a small cohort of DJs and MCs in 1970s New York City (and a few other American urban centers) to thank. This historical role of the DJ—to build community by getting audiences out on the dance floor while rescuing and re-presenting lost musical classics for a new generation of listeners—is at the center of Nate Patrin’s dynamic and riveting new study, Bring That Beat Back: How Sampling Built Hip-Hop. Sampling began at block parties and in discos, where the nascent hip-hop scene was born, matured amidst the rapidly-expanding recording technology that revolutionized popular music in the ’80s, and reached maturity as DJs and producers sought and treasured the rarest breaks and the sweetest jams to back their MCs. The four legends of sampling and hip-hop production examined by Patrin in the book—Grandmaster Flash, Prince Paul, Dr. Dre, and Madlib—each embody a specific phase and philosophy in this evolution of sampling in hip-hop and, by extension, all of popular music.

Patrin digs deep into the record crates of the first hip-hop DJs, tracing the essential breakbeats that defined early hip-hop tracks. The MCs and DJs whose skills on the mic and turntable eventually created hip-hop owe much to West Indian DJ traditions such as toasting; Patrin notes that early seminal hip-hop DJs Kool Herc, Afrika Bambaataa, and Grandmaster Flash all share Caribbean roots. And the shared desire of DJs to provide the freshest, rarest, and most “eclectic” beats to get people out on the dance floor—sometimes even head-to-head at a block party or dance night—echoed the competition that was happening on the dance floor between gangs and crews. Patrin notes that “Herc made a point of removing the labels from his records… and keeping them in nondescript sleeves so nobody else could capitalize on his discoveries.” Finding a forgotten gem at a record store or in someone’s collection was the real prize, which meant an encyclopedic knowledge of jazz and soul rarities. “Real DJs ignored the big names on the front of the record for the small ones on the back,” Patrin writes. “Certain previously semi-anonymous session players became must-haves. Did Bernard Purdie play drums? Was Chuck Rainey on bass? Cop that shit.” It wasn’t just esoteric musical knowledge that made the DJ; technical knowledge was highly prized and necessary. Herc’s giant sound system—powered by cutting-edge turntables imported from Europe and massive amps and speakers—was a testament to his deep technical know-how.

As awareness of hip-hop began moving downtown in the late ’70s—into the clubs, the discos, and the art scene in New York City—DJing and MCing began cross-pollinating with the contemporary music scene. Even at the Edenic outset of this exciting and dynamic new culture, there was conflict between DJs and the musicians they sampled over a perceived “theft” of their musical work. Sugarhill Gang’s “Rapper’s Delight,” the first rap song to make the Top 40, copped the bass line and melody from Chic’s recent massive disco hit “Good Times,” which led to the first of what would become many lawsuits and settlements over sampling in hip-hop. But Pandora’s box had been opened, and, by 1983, hip-hop as an art form had a solid canon of traditions to draw upon—as well as a new generation of MCs and DJs who sought to emulate the crate-digging obsessiveness of trailblazers like Herc and Flash. Whole compilation albums of classic drum breaks started being released; even James Brown got into the act with an album of ’70s rarities that would become hip-hop essentials, including a nine-minute version of classic “Funky Drummer” that would propel countless ’80s and ’90s hip-hop tracks.

In the “Prince Paul” section of Bring That Beat Back, focusing on the innovators in sampling in the late ’80s, Patrin hits the sweet spot of the beginning of my own personal awareness of hip-hop. Whether it was seeing Run-DMC spar with Aerosmith on MTV, or the cassettes circulated by friends and classmates—names like Ice-T, N.W.A., Public Enemy, Boogie Down Productions, De La Soul, A Tribe Called Quest—the cultural wave of hip-hop began to crest and splash over the invisible walls that redlining had built around our white suburban neighborhoods. These tapes felt to us like samizdat: they all regularly played on Walkmen instead of boom boxes so parents and teachers couldn’t catch what we were listening to. And it’s no surprise that, as the hip-hop artists got younger and closer to our own age, the samples started to consist of music that our late Generation X selves remembered fondly from our own living memory, a first fleeting feeling for our generation of pop culture nostalgia. The Prince Paul-produced 1989 De La Soul long-player 3 Feet High and Rising was a seminal hip-hop experience for listeners of Patrin’s (and my) age group. Its playfulness and willingness to cheekily appropriate radio-friendly smooth hits of the late ’70s and early ’80s was nothing less than a cultural bridge between old school and new school, Black and white: “[On 3 Feet High and Rising], sampling didn’t just build loops,” Patrin says, “it formed conversations.”

Patrin also asserts that this mainstreaming of sampling and the increased plumbing of our collective memory didn’t happen in a vacuum. It was part of a larger and more profound cultural (and political and economic) pivot thanks to the end of the Cold War and the much-talked-about “end of history”:

The timing for all this was fortuitous. The presumed triumph of the West’s form of capitalist democracy that followed the 1989 fall of the Berlin Wall dovetailed with a late ’80s surge of commercialized nostalgia. As aging baby boomers and their younger siblings and offspring in Generation X faced the waning years of the decade with a turn toward a fondly remembered past—Beatles albums reissued on the new must-have CD format, all your old favorite shows airing constantly on Nick at Nite, every movie you remember from your childhood available to rent on VHS—hip-hop’s awareness of the past, and its creators’ ability to reconstruct it, took on its own undercurrents of longing. If the end of history felt like a slow but sure turn toward the idea that an unwritten future had no real shape or form to it, this wave of music arose from the very idea that the past was all they really had to build the present with—the future would have to wait.

Prince Paul does his best Rod Serling impression in the music video for De La Soul’s massive summer of ’89 MTV hit “Me Myself and I”—buoyed by an electrifying hook copped from Funkadelic.

But this increased visibility and popularity is precisely what led to sampling’s first great prolonged controversy. Lawsuits multiplied; sampling masterpieces like the Beastie Boys’ sophomore album Paul’s Boutique—stuffed with hundreds of samples and beats—stand as a final testament to a more lawless era when samples didn’t get comprehensive financial and legal clearance. And it wasn’t just white artists like The Turtles (and their landmark lawsuit against De La Soul) who were resentful of the “theft” of their music. The Black jazz and soul and funk artists whose work was the foundation of those early DJing days in the ’70s—the artists on those label-less LPs guarded like a hoard of treasure by Herc and Flash and their fellow hip-hop trailblazers—felt their hard work was stolen, and expressed this opinion in terms of Black pride. Patrin notes that jazz musician and Black political activist James Mtume had harsh words for what he perceived as the creative and cultural cul-de-sac of sampling and DJing: “You cannot substitute technique for composition. We’re raising a generation of young black kids who don’t know how to play music.” While rap groups, producers, and DJs routinely asserted that their collage of sound created from bits and pieces of old recordings produced something entirely new—and that hip-hop was in turn bringing knowledge of and veneration for these older artists to a new generation—this tension remained for much of hip-hop’s rise to prominence in the 1990s.

I may be giving the later chapters of the book on the mid-’90s and beyond slightly short shrift in this review, but rest assured they are also a thrilling ride. Dr. Dre’s humble beginnings in LA dance clubs in the early ’80s, eventually expanding into a “G-Funk” record-production empire thanks in large part to George Clinton and Bootsy Collins-filled record crates (that also led to a career renaissance for the Parliament-Funkadelic collective in the ’90s), is an amazing and dramatic story. And the final section of Bring That Beat Back, focusing on Madlib and other more contemporary sampling wizards, brings the story full circle, as their desire for rarer and rarer beats and a compositional virtuosity calls to mind those heady years of hip-hop in the Bronx some 40 years earlier.

The technological advances that accompanied hip-hop’s rise—from booming systems and turntables, to drum machines and sequencers that could only spit out a few seconds of sound, to the fully computer-driven music production of today—allowed for further and further subtlety to be applied to the music and thus, paradoxically, a deeper understanding and appreciation of it. “It wasn’t just listening to a band and affecting its aesthetic,” Patrin says about one of Madlib’s pseudonymous projects, “it was putting in the time, decoding the pieces, pulling them apart, and reassembling them that helped grow the knowledge of where this music actually came from, what it first meant, and what else it could mean in the hands of someone decades later. When an artist like Madlib used that knowledge to build a new facade of his musical self with those old formative records as a mediator, the opportunities for self-expression ironically became even more wide open.”

The final chapters of Patrin’s book prove that hip-hop—now nearly half a century past its origin point in the dance halls and street parties of New York City’s outer boroughs—hasn’t changed its basic identity at all. Record crate archeologists still take on new names and identities to share their musical treasures with the world and get people dancing—and thinking seriously about their material conditions under American apartheid. The aesthetics and technology of hip-hop may have been revolutionized several times over since the mid-1970s, but the fundamental core of its cultural meaning and value haven’t.

One thought on ““Style Is Surely Our Own Thing”: Nate Patrin’s ‘Bring That Beat Back’”