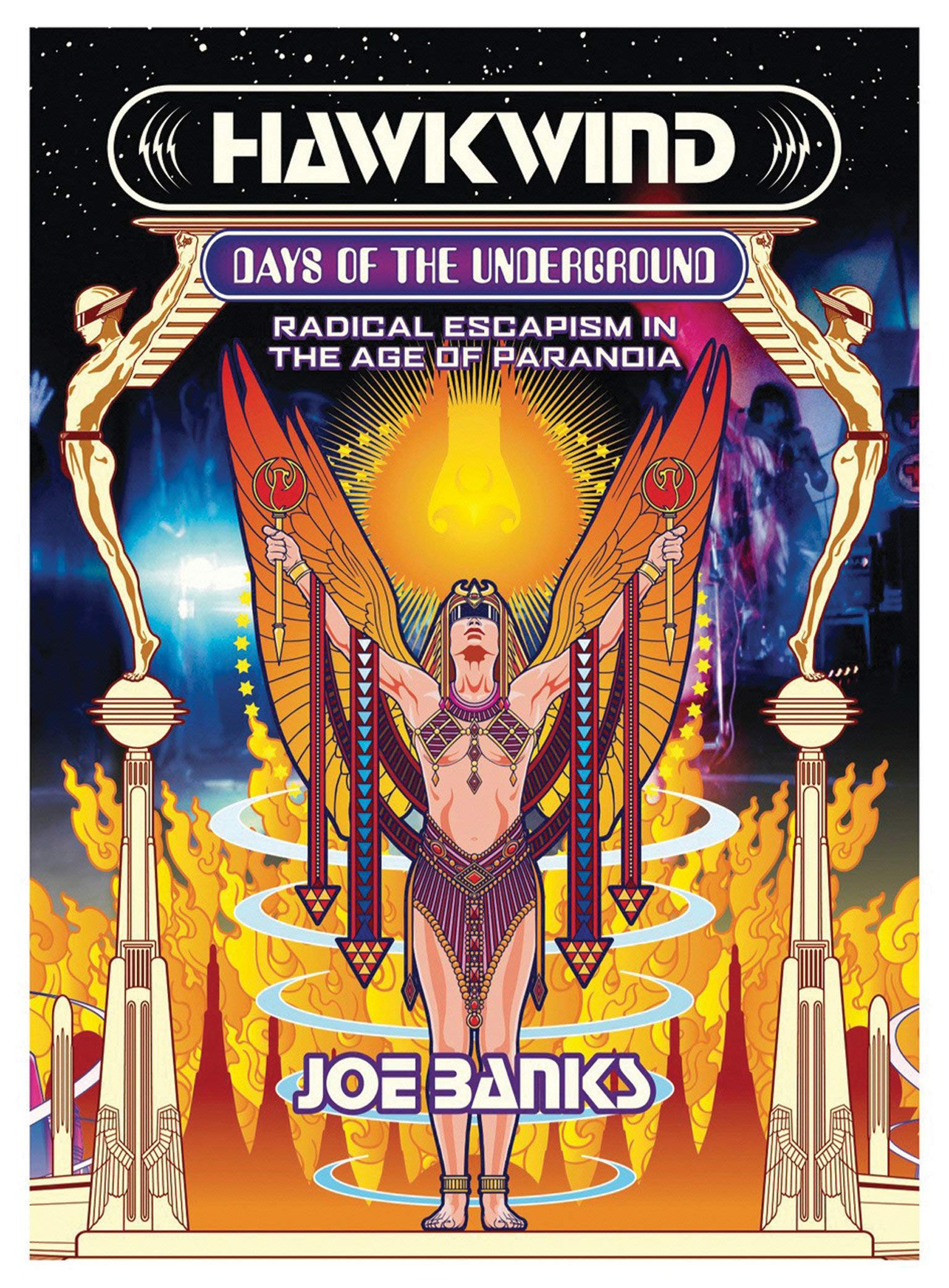 Hawkwind: Days of the Underground
By Joe Banks
Strange Attractor, 2020

Disclosure: Joe Banks is a We Are the Mutants contributor.

I don’t really remember anybody actually mentioning Hawkwind in my youth. You just seemed to absorb an awareness of them from the landscape by osmosis, the same way you absorbed knowledge of the locations of short-cuts, haunted houses, and the more dangerous potholes. Cognizance of these archetypes stalking out from the mists—lead singer and guitarist Brock the stroppy-looking, vaguely Asterix-ey Celt chieftain, even his name sounding like something out of the pulps; Stacia, mad-eyed unafraid galactic goddess; Calvert the seer, consumed by the voltage of his visions; Nik Turner, crazed sax druid; Lemmy the pagan barbarian; and all the other assorted weirdos, bruisers and flakes, equal parts disconcertingly familiar and reassuringly alien—somehow assembled itself in your brain of its own accord from fragmentary exposure like a sub-language. Shards of an aesthetic, like the weird Art Nouveau-ish t-shirt worn by the girl at the youth club, the truncated roar of “Silver Machine” coming from the open door of a pub, a friend’s older brother’s odd-smelling bedroom, all pointing to the existence of this thing: Hawkwind.

For a period, I didn’t even realize that Hawkwind was a band, having intuited that it was a TV program along the lines of Catweazle, and by the time I was a teen in the mid-’80s, Hawkwind were so violently out of fashion in the milieus I frequented that it wasn’t even necessary to choose not to like them—not liking them was the default position. Perhaps, along with a widespread post-’77 mistrust of hippies (ironic, seeing as it was often hippies-turned-punks who were punk’s most dedicated propagators), it was this sense of them more as an aspect of the environment than a rock revelation that contributed to the relative neglect the band long enjoyed in their native island. And yet they remained eerily omnipresent and potential, like a seam of strange metal running through everything that you did like, and biding their time until the moment you noticed them and the electricity started to flow.

For those that have managed to avoid the knowledge, Hawkwind are a British band who played—and in fact continue to play—an unappetizing-sounding cocktail of hard rock, hippy sludge, psychedelic rock, prog, and a kind of Ur-punk. Over the top of the chippy rhythms, DIY electronics, and gloomy melodies sits the crazed lyrical world the band have gradually accreted around themselves over the years, where genuinely inspired SF poetics collide with off-their-face ramblings pulled from the last SF pulp someone read. All this somehow coalesces into what’s somtimes seen as the UK’s equivalent of Krautrock. It’s often referred to as “space rock,” a concoction they’ve stuck with for decades. See? You’re already sneering. But that’s only going to make you feel even more of a tit several years down the line when you feel compelled to play “Orgone Accumulator” five times in a row every time you’ve had a drink. Because Hawkwind technology works, and when that electricity starts to flow, you will feel the irresistible cosmic boogie blasting through your body.

Days of the Underground takes upon itself the task of lasering away the galactic cobwebs obscuring the sleek form of starship Hawkwind, waking its crew from suspended animation and firing up its thrusters. In it, author Joe Banks shows how transformative Hawkwind were from a musical, political, and maybe even sociological standpoint, their stubborn refusal to become part of the machine hardwired into the instruments of their mission. He contextualizes them in the various musical scenes they warped through and reminds us of their DIY vocation, highlighting how much more they perhaps have in common with an entity like CRASS than they do with their nominal peers. It’s in their shared aggro-hippie roots in free festivals and pagan whatnots, artwork-as-intrinsic-part-of-the-package philosophy, quasi-military collective presentation, relentless beat, guitar rhythms that feel like they’re hacking away at something, and even in the prole-patrician tensions implicit in the contrasting vocal stylings of Hawkwind’s Brock and Calvert and CRASS’s Eve Libertine and Steve Ignorant.

Like the idiot I am, I avoided Hawkwind like a time-plague for much of my youth, so the revelation when it came that they were not in fact some embarrassing 12-bar club band but a paradigm-blasting mindfuck was even more shocking, and this is the feeling that Days of the Underground captures: that moment of protracted excitement when you realize something is great. It’s also the perfect book for anyone like me who has a dread of books about bands and the deadening effect too much information can have (at least for me) on the daft power of rock ‘n’ roll. Practically every time I’ve read a book about a band it’s felt a bit like watching a beautiful stage set be dismantled by well-meaning yet stolid roadies whose main interest is in the kinds of screws holding the props together, or what’s going to be on the catering table.

Days of the Underground isn’t like that. It’s a book written by a fan in the best possible meaning of that phrase, in the sense that it communicates its author’s deep passion about and desire to share something transformative and, in its way, profound. The book is rammed with insightful commentary, informed analysis, and detailed information about every aspect of the band (and their endless internal crew disputes), but despite that it somehow never lets the momentum slack or allows fannery to drown out the propulsive Cosmic rhythm. I came away from it feeling excited and galvanized—not just wanting to re-listen to every Hawkwind LP (though I definitely did) but also wanting to actually do things: not read another rock book but pick up a guitar, draw a picture, write a story, go into suspended animation and let the automind pilot me outside of time. It’s a read that feels more like an actual exciting thing than it does a book about an exciting thing, if that makes any sense. As far as I’m concerned, there’s no greater compliment.