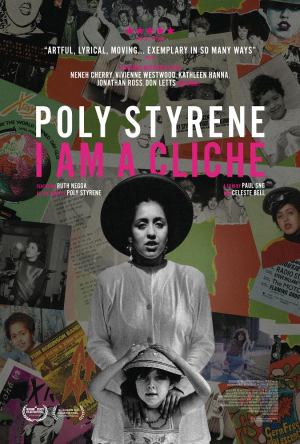 “Oh, I saw a flying saucer last night. It told me to give up the electric, plastic way of life.”

I first heard about the X-Ray Spex from a Riot Grrrl flier handed out at punk concerts in the mid-’90s. Their one album, Germfree Adolescents, was on a list of woman-led punk music, alongside the Raincoats, the Delta 5, Crass, and Jayne County. I loved the band’s name, so I haunted record stores pawing through the XYZ bin until I found the album on cassette during a beach vacation in the summer of ’95. I stuck it in the player and from the moment I heard Poly Styrene’s inimitable voice—at once forthright and teasing, poppy and punishing, skidding from a husky croon to a paint-stripping wail—I was in love.

And that’s the public story of Poly Styrene, née Marianne Elliott: Poly the pioneer, an Afro-British woman fronting a punk band in the overwhelmingly white and male scene of the late 1970s; Poly the artist, the singer/songwriter/designer whose Day-Glo sensibility was the candy coating over lyrics exploring the convergence of consumer culture and personal identity. Poly Styrene: I Am a Cliché, the new documentary co-created by Poly’s daughter Celeste Bell and Paul Sng, gives you plenty of Poly the pioneer. Musicians like Bikini Kill’s Kathleen Hanna cite her as an inspiration; Neneh Cherry says, “I actually started singing because of her.” Poly’s artistic influences and choices aren’t explored in as much depth, but maybe all you have to do is play some footage of her howling into the microphone, in a dress that looks like bacon and eggs, to paint the picture. What I Am a Cliche does that no other documentary could do is close the gap between Poly Styrene and Marianne Elliott.

It would be easy to think that Poly Styrene had a band, and then Marianne Elliott had a baby; that Poly Styrene had insights, and Marianne Elliott had a nervous breakdown. But I Am a Cliché doesn’t just show you life after the X-Ray Spex—Elliott’s brief marriage, the birth of her daughter, her mental health crises, her stints in hospitals and with the Hare Krishnas. Bell’s act of insight and mercy is that she allows us to see that Poly Styrene was her mother all along, and vice versa. The documentary is a moving portrait of, among many other things, someone whose struggles with mental health interweave with her incisive cultural critique. You can talk about this interweaving in many ways: maybe Poly expressed her first break with reality in terms of a rejection of “electric, plastic” consumer culture because that’s what she was thinking about anyway. Maybe she rejected the culture of advertisement and consumption, glitz and fame, because it was making her ill. But this film lets its subject salvage wisdom from the wreckage of reason. It’s rare and precious to find a film that doesn’t glamorize mental illness, but also doesn’t let it discredit the sufferer.

There are a lot of inspirational angles to I Am a Cliché, a lot of things it will make you feel okay about, if feeling okay about these things is something you struggle with. It’s okay to be mixed-race in a world that wants to force you to pick sides; it’s okay to be plump in a world that wants to airbrush you for your album cover; it’s okay to have a council-estate accent and the sweetest smile in punk. It’s okay to be a divorced single mother struggling with mental health. It’s okay if you can’t forgive your mother for abandoning you; and if you find that time, against your will, is wearing you down into forgiveness, that’s okay too. But maybe the most unexpected inspirational message of this film is: if you’ve been given something true to say, it’s okay if you say it while taking your clothes off and explaining to your bewildered bandmates that you heard it from a flying saucer.

As art, I Am a Cliché’s most notable feature is Celeste Bell’s slow, deliberate speaking style. Her quiet retrospective is itself a critique of the high-speed punk life—her mother’s career got started in 1976 and crash-landed three years later. This is mostly a straightforward documentary. Bell’s voice, not the images or storytelling techniques (or the bland instrumental music), is what makes space for meditation. The movie opens, “My mother was a punk rock icon. People often ask me if she was a good mum.” It’s not a question anyone could answer briskly. Bell does her mother the honor, and offers viewers the subtle rebuke, of not even asking it too fast. She lets it sink in: what it would mean to be asked that, and to take on the responsibility of answering.

“Marianne Elliott from Brixton” taught her daughter “to love the sea, because water is the beginning and the end of life on earth.” Elliott spent her childhood in public housing, with “a bath in the kitchen with a lid on.” An early poem, “Half Caste,” describes the violence she faced as the child of a Somali father and a white mother, and the violence others projected onto her: “Do you wanna fight…. Will she cut me with a flick knife.” “I remember her coming home with bruises on her legs where boys had kicked her,” Elliott’s sister Hazel recalls. “She was a fighter.”

A fighter and a seeker, always. Someone always aware of what others saw when they looked at her; who struggled to see herself in the mirror. Poly was “obsessed with fashion,” and her DIY Space Age, Pop Art look defines her punk image almost as much as her lacerating voice—goggles and helmet, bright blocks of clashing color, braids hiding her eyes and braces flashing on her teeth: Mad Max by way of Lisa Frank. People who have long wished they could dress cool like Poly Styrene will be startled and ruefully delighted by Bell’s complaint, “I pretty much hated everything she wore… especially when she forced me into ridiculous outfits too, like the matching mother-and-daughter Laura Ashley phase she got into.” Poly’s style wasn’t a protective coating: watch her still, sad, hopeful eyes and listen to her silence after a TV interviewer cracks, “With those braces on, she’s hardly Linda Ronstadt.” Fame, for Poly Styrene, meant being handled by other people’s eyes.

The documentary presents the X-Ray Spex’s New York debut as a turning point. In New York, Poly discovered that the commercial apocalypse was now. New York was neon, cocaine, the future punching you in the face every time you turned around. Poly felt that New Yorkers really lived the stuff she sang about, and her reaction was horror: “God, if that’s what it’s gonna be like, I don’t want it.” New York refined Poly’s philosophy, as well as her “perverse fondness” for the plastic, throwaway culture she found equal parts seductive and threatening. New York, obsessed with fame, also provided the spark for her bipolar disorder. It was after New York that people close to her began to notice erratic behavior—like that night she saw the flying saucer. Once she started tipping into mental illness, she fell fast: “The first time she saw herself singing on the telly,” Bell recounts, “she was on the psychiatric ward.”

“Lots of episodes” followed. Marianne Elliott was misdiagnosed with schizophrenia—another false identity imposed from the outside. Bell doesn’t sugarcoat it: “I saw my mum being sedated many times… I was scared of her.” Elliot sought solace with the Hare Krishnas, where she received another new name, Maharani Dasi, and reconciled with Lora Logic, the X-Ray Spex’s first saxophonist. The peace Elliot found with the Hare Krishnas was intermittent at best. She still wasn’t able to care for her daughter, and losing Bell, who was primarily raised by Elliott’s own mother, “broke her heart.”

Yet her belief remained firm and sincere. Toward the end of her life, Poly Styrene returned to the stage, doing a comeback concert in which she called Bell onstage to join her in singing one of the X-Ray Spex’s most famous songs, the feminist provocation, “Oh Bondage! Up Yours!” It’s an edgy song, but there’s nothing but tenderness in Bell’s voice as she recalls, “It was amazing.” Elliott and Poly flow together here; but Elliott was Maharani Dasi too, and Maharani was Poly, the seeker, the rejecter of modern tech-based life in favor of ascetic community. And so the film ends not with the shared concert, but with a different mother-daughter ritual. Bell honors her mother’s last wish, to have her ashes scattered in the city believers consider the birthplace of the god Krishna.

To my surprise, this movie reminds me of nothing so much as Daniel Kelly’s 2014 Living on Fire: The Life of L. Brent Bozell, Jr. Marianne Elliott was a generation younger than the conservative Catholic firebrand and co-founder of National Review, and differed from him on almost every other demographic marker too. And yet their stories resonate with one another: both founded a vigorous cultural critique on personal alienation from contemporary complacency; both were harrowed by bipolar disorder, which disrupted the family they loved; both sought a deeper truth in religion and found it to be no cure for their suffering, but remained true to their faith anyway, at last experiencing reconciliation and peace. Both found wisdom in experiences that, to unsympathetic normal eyes, might look like nothing but symptoms.

One thought on “No Bondage, No More: ‘Poly Styrene: I Am a Cliché’”