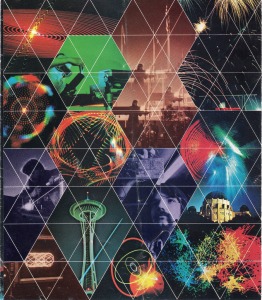 The laser light show was innovated by filmmaker Ivan Dryer in the early 1970s, after he was introduced to laser art by Caltech physicist Elsa Garmire. The laser technology itself, a “four-color (pure-spectrum red, yellow, green, and blue) laser deflection system” called VIDEO/LASER II, had been developed by Lowell Cross and Carson Jeffries for an interactive, multimedia pavilion at the Expo ‘70 in Osaka, Japan.

Dryer started Laser Images, Inc. in 1971, and his original Laserium show debuted in 1973 at Los Angeles’ Griffith Observatory planetarium, where Dryer had previously worked as a tour guide. The “cosmic light concerts” became immensely successful, expanding to seven U.S. cities by November 1975 and grossing over $3.6 million. By 1977, Laserium had expanded to 13 U.S. locations, as well as venues in Canada, the U.K., and Japan. Laser light shows were integrated into rock concerts—as well as sports venues, art shows, and dance clubs—throughout the 1970s. Dryer himself operated the lasers for many of the stage performances of pioneering electronic music group Tangerine Dream. In 1978 the Food and Drug Administration declared lasers a “danger to the audience,” potentially causing serious eye injuries. Permits were soon required, and made an already expensive affair more burdensome. When Griffith Observatory closed in 2002 for extensive renovations, the Laserium was “discarded.” Interest in the medium had been declining since the 1990s, as cinematic special effects became much more sophisticated and the musical tastes of younger audiences became more diverse and decidedly less psychedelic.

The original Laserium is still active in Van Nuys, California, with live shows scheduled on Fridays, Saturdays, and Sundays. All of the playlists used from 1973 to 1999 can be found here.