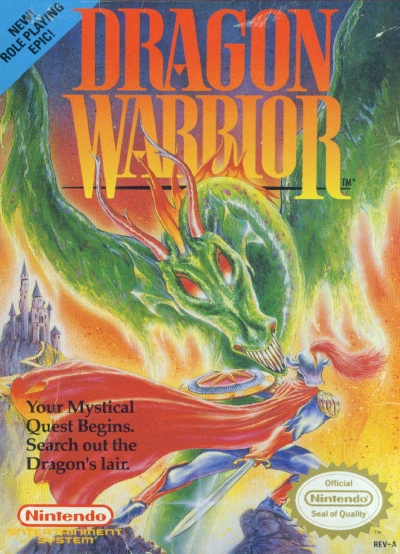 It’s Saturday night. I’m with friends at a party, but I should be playing Dragon Quest. Not that I’d rather be playing Dragon Quest, mind you. I’d much rather be out with human beings I enjoy, but Dragon Quest looms over my head. What should have been a couple-session run-through of an old RPG somehow morphed into a piecemeal, month-long slog. It’s the first “historically significant” game I’ve played that feels like a cave painting, a work enjoyable only as a first step toward things to come. Playing it bores me. Thinking about playing it bores me, but I can’t turn my back on it now. Why can’t I just muster up the patience, put on some appropriately epic background music, and beat the damn thing? How much longer can it be? Will I be stuck for eternity in its mildly pleasurable RPG feedback loop (appropriately called the “grind”), a lab rat constantly pressing the same single button for his ten experience points’ worth of dopamine? Waiting in line for the bathroom, it hits me. Dragon Quest is homework, and I’m the unruly teen avoiding it.

Dragon Quest (Dragon Warrior in North America), first released in 1986, is one of the most influential game series of all time, famous for many things: Dragon Ball creator Akira Toriyama’s endearing monster designs; popularizing the role-playing game on home consoles; proving Japanese dweebs can dig medieval sword-and-sorcery just as much as the West’s D&D-indoctrinated shut-ins. (The series is so popular in Japan that it birthed an urban legend; new entries can only be sold on weekends, due to the inevitable student truancy and distraction the game causes.)

But Dragon Quest, historically and mechanically, is all about the grind. A grand majority of the game takes place as your character walks in circles between Point A and Point B, because the protagonist is not strong enough at Point A to survive long enough to get to Point B right away. Before any true progression can take place, levels must be won, hit points must be earned, and new powers and weapons must be acquired. Yuji Horii, the game’s mastermind, developed this routine through a bit of alchemy more magical than anything in Dragon Quest‘s boilerplate fantasy plot. He looked at Western computer RPGs like Wizardry and Ultima (both from 1981) and translated their sadistic number-crunching into something novice gamers could understand within a few button presses. Horii often mentions with pride that Dragon Quest games can be easily beaten without a strategy guide and played at any level of skill. And he’s right: experienced players can use their inventories and spells in much riskier, under-leveled battles, while scaredy-cats and novices can wail on slimes and other weak monsters until they feel powerful enough to comfortably progress. 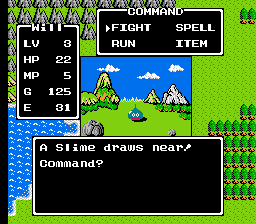 On one hand, I applaud Horii’s translation of something math-heavy and intimidating into a perfectly inviting (and sometimes even addicting) play system. Transitioning a genre previously enjoyed almost exclusively by the geekiest of computer geeks to the Famicom-playing masses is no small feat, and Horii’s brightly colored RPG created an entirely new path for console games. The Gameological Society’s John Teti described leveling up in Dragon Quest for the first time as a revelation, a sign that games can create experiences more nonlinear and introspective than Mario Bros. Grinding is work, but it’s work that can lead to discernible improvement of one’s character, both in a game and in terms of real world patience and tenacity.

That digitized self-improvement is the key to grinding’s appeal, and it’s why Horii was right in thinking he could make the process attractive to non-role-playing geeks. Grinding unquestionably borders on busywork, but through this toil and commitment, the player starts to invest in an avatar or a world. Reaching a new level takes on greater significance than just seeing a bigger number on the screen. It’s a reward for spending time in that uniquely specific universe.

Perhaps this is grinding’s greatest subconscious achievement: it makes a game’s world more memorable. I walked through every inch of Dragon Quest‘s forests so many times that the map is now far more iconic to me than games I enjoy ten times as much. The average grind-heavy RPG probably has more in common thematically with a workplace sitcom like The Office than the Arthurian legends that inspired RPGs to begin with. Spend long enough with a group of people in a certain place—even if the actual shared activities are rather drab—and binding ties will undoubtedly form.

So if grinding can create such powerful bonds between players and games, why did Dragon Quest leave me so indifferent? Well, grinding is really only as effective as how it’s disguised, and Horii’s early experiment is about as transparent as someone actually shouting numbers at you. Realizing I was sailing through enemy encounters in areas that seemed brutal and off-limits mere hours before was a cool revelation, but getting there just felt like a vacuum I slowly filled with my time. I can’t judge a noble first attempt in a genre too harshly, especially when its template led to such favorites as Persona 4, Chrono Trigger, and Super Mario RPG. But my inability to connect with Dragon Quest illustrates a frustrating dilemma that faces those interested in the history of games. The time commitment and player involvement necessary to invest in a game make revisiting these older, influential titles more difficult than watching an early film or listening to an essential musical recording. Even if you’re deeply invested in the medium and its evolution, who wants to spend ten hours bored out of his wits?

Luckily, a solution to the grinding problem presented itself fairly quickly. As soon as the next iteration of Dragon Quest (and the first Final Fantasy, released in 1987), developers realized additional party members inherently made RPG combat more nuanced and strategic. Whereas the first Dragon Quest often feels like merely filling meters, party-based RPGs force the player to balance different classes, choose from a greater variety of skills, and create valuable interplay among characters. Only recently have games re-embraced single character RPGs, incorporating elements of survival and exploration to up the ante. However, the inherent repetitiveness of the RPG form might not always be conducive to one lone figure blasting away at enemies with the same handful of spells. It might be dangerous to wander alone in Hyrule, but in an RPG like Dragon Quest, it’s just dull.

J.G. Newman is a writer and film researcher living in Los Angeles. At his former blog, Playing the Canon, he reviewed highly regarded classic and contemporary video games.

2 thoughts on “‘Dragon Quest’ and the Power of the Grind”