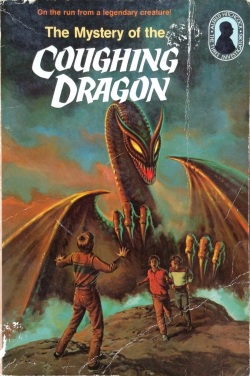 The Mystery of the Coughing Dragon (Alfred Hitchcock and the Three Investigators #14)
By Nick West
Random House, 1970

The Three Investigators series was published between 1964 and 1987, with the “Hitchcock editions” (featuring cover illustrations by Robert Adragna and Hitchcock’s shadowed profile in the top right corner) first appearing in 1978, to great success. The series is about three teenaged detectives who are hired to solve nominally supernatural mysteries, almost all of which turn out to be the result of criminal human agency. The Mystery of the Coughing Dragon marks the first time I’ve read the series in almost 35 years.

Nick West, a pseudonym of Kin Platt, does a good job moving the action along, and we get a good sense of the main characters right away: Jupiter Jones is the undisputed leader of the group, precociously intellectual, confident, and unflappable; Pete Crenshaw is the “athletic” one who would rather be surfing; and Bob Andrews is a gadgeteer in charge of “Records and Research.” The boys—their ages aren’t mentioned, but they’re not old enough to drive—operate out of a mobile home trailer in the scrapyard owned by Jones’ aunt and uncle. Inside the trailer, which is “surrounded by piles of junk” and accessible only through a trap door in the floor, is a phone, a darkroom, a small laboratory, some file cabinets, and a “washroom.”

The mystery in this volume concerns several missing dogs in the coastal California town of Seaside, and a giant dragon that one of the dog owners, a previous director of sci-fi and horror films, sees emerge from the ocean and disappear into a cave beneath his house (the dragon makes a “high-pitched rasping sound,” like a cough). We get the usual misdirection, red herrings, and a not quite believable conclusion as the investigators survive a sabotaged cliff-side staircase, scuba divers with spearguns, a shotgun-wielding curmudgeon, and, of course, a coughing dragon.

What’s noteworthy about the books, apart from the fact that they’re surprisingly well-written (I’m reading Harry Potter and the Sorcerer’s Stone to my five-year-old right now, and it’s a cliché-ridden, grammatically obtuse slog), is the freedom the boys are allowed. Unlike the Hardy Boys brothers, who made their print debut in 1927, the Three Investigators operate and exist almost independently of their parents. Jupiter gets “permission” (though the other boys don’t) from his aunt to hitch a ride in the gardener’s truck to meet their filmmaker client 20 miles away, but that’s the only time he consults with a legal guardian. The boys, vetted by none other than Alfred Hitchcock and assisted by “unlimited access” to a Rolls Royce and its chauffeur (granted by a previous client), simply go about their business, often well into the night—and their business is applying innocence, integrity, and logic to an adult world that is often corrupt, irrational, and violent. It’s nothing graphic or bleak, mind you, and all is made right at the end of the story, the ringleader in this volume repenting immediately, inspired by the do-gooder kids.

There was a shift in children’s media in the late 1960s and throughout the 1970s, as evidenced by the immense popularity of the Scooby-Doo and Pippi Longstocking franchises (preteen Pippi lives by herself and shuns school), that saw mainstream publishing (among other culture producers) recognize and exploit the power of the youth market following the rise of student activism in 1964 and a “Don’t trust anyone over 30” mentality throughout the remainder of the decade. The Three Investigators books are part of this refreshing milieu, and my rediscovery of them was a pleasant surprise. —K.E. Roberts

Five teenagers, all strangers, wake up to find themselves trapped in a seemingly infinite matrix of staircases in William Sleator’s House of Stairs (1974). Peter arrives first, a meek, soft-spoken orphan who frequently drifts into daydream about a former roommate, Jasper, an athletic boy he viewed as a protector (and to whom, it is implied, he may have an unrealized homosexual attraction.)

Peter immediately encounters Lola, opposite of Peter in almost every way. She is self-reliant, rebellious, and, to Peter’s shock, swears and smokes cigarettes. About the only commonality she has with Peter is her age (both are sixteen) and the fact that she, too, is an orphan. Lola takes charge, leading Peter on an exploration of the dangerous, vertigo-inducing structure:

Without railings they rose and fell at alarming angles, forking, occasionally spiraling, rising briefly together only to veer apart again, crossing above and below one another, connected at rare intervals by thin bridges spanning deep gulfs.

They discover it impossible to make too much progress either ascending or descending, as the stairways inevitably level out and force them back in the opposite direction.

They eventually encounter the other three teenagers, all orphans living in state facilities before waking up in the maze: Blossom, a selfish and self-loathing girl who relishes gossip and immediately resents Lola’s blunt style of speaking; Abigail, an attractive but melancholy girl who seems disengaged with the situation and perhaps life itself; and Oliver, an athletic and charismatic alpha-male who wins Peter’s adoration as a surrogate Jasper.

Clues in dialogue suggest a dystopian future in which books have given way to interactive holographic screens, the air is so polluted that gas-masks are required for traveling outdoors, and only the very wealthy have private homes, with most people crammed into residential mega-structures. It’s a gender-segregated society as well. None of these 16-year-olds have ever spent time alone with members of the opposite sex, and seem to know little if anything about sex itself.

Surprisingly, because it’s a detail often omitted in science fiction, one of the first concerns the group addresses is where the toilet might be. They eventually find an endlessly flushing well built into one of the arching bridges. The toilet not only offers zero privacy, but also serves as their only source of drinking water, a discomforting fact that contributes to the kids’ psychological agony.

More important is the matter of food. Blossom has discovered that making certain gestures with her body and face near a cylinder-shaped machine mounted to the floor causes it to emit pellets of food. But the machine does not work consistently and the exact motions necessary to activate it become more complex. Eventually the participation of all five kids, moving together in a kind of dance, are required for the machine to produce, and even then, it only emits enough food to keep them going, never enough to truly sate their hunger.

Meanwhile the intergroup dynamic becomes a problem. Lola’s too-honest communication style puts everybody off, including her closest ally, Peter. Peter is either daydreaming about Jasper or following Oliver around with dog-like loyalty. Oliver wants to exploit their isolation to explore the opposite sex using Abigail as his languid subject. And Blossom is busy trying to arrange an alliance against Lola.

When a physical altercation among the group causes the food machine to activate, it opens a disturbing new chapter in which the group believes they must hurt each other, either physically or emotionally, to trigger the device. Lola and Peter refuse to participate further and split off from the rest of the group: two tribes, now at war.

House of Stairs is an experience of pure psychological torture. The machine that may or may not be responding to their actions, the poisonous group dynamic that must be tolerated in order to make the machine work, the lack of privacy at all times, as well as the constant feeling of insecurity within the infinite labyrinthine structure all collude to create a palpable anxiety that the reader shares with the characters. The man-made environment, created deliberately to torture its unwitting prisoners, is reminiscent of Harlan Ellison’s 1967 story “I Have No Mouth and I Must Scream” (except, you know, for kids), while the degeneration of civility among unsupervised children evokes William Golding’s Lord of the Flies (1954).

This was Sleator’s third children’s novel. His follow up, Among The Dolls (1975), also involved characters forced to persist after becoming trapped in a contained space (in this case, a child becomes trapped in a haunted doll house with the now living toy dolls she formerly played with, sometimes roughly.) —Brother Bill

7 thoughts on “Double Exposure: ‘The Mystery of the Coughing Dragon’ and ‘House of Stairs’”