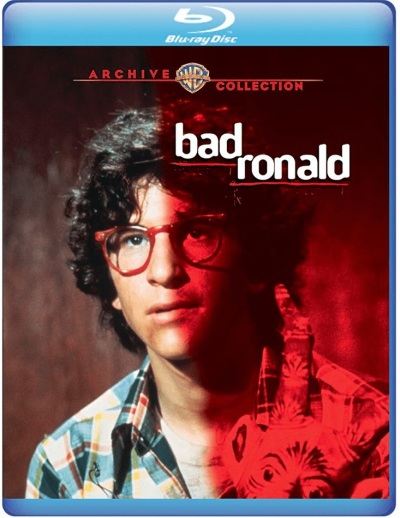 During the 1970s, original, feature-length scares could be found on TV almost every night of the week. They were cheap to make and, after Rosemary’s Baby and The Exorcist, our defenses were laid bare. The best known of these quickie horrors, many of which dealt enduring trauma to a generation of children often home alone, include 1971’s Duel, Steven Spielberg’s feature-length debut, written by Richard Matheson; 1972’s vampire-hunting classic The Night Stalker, the highest rated TV movie up to that point, also written by Matheson; 1973’s Don’t Be Afraid of the Dark, a chiller about goblins terrorizing a housewife in her new home; 1975’s Trilogy of Terror, an anthology adapting three Matheson short stories (if you happened to doubt his pop cultural eminence); and, perhaps most of all, Bad Ronald, which premiered on October 23, 1974, exactly 44 years ago today.

We understand right away why awkward high school senior Ronald (Scott Jacoby) is going to do something bad: his mother (Kim Hunter, in what I have to believe is a tongue-in-cheek performance) is clearly unhinged, and way too attached to her son. (This is the first of many riffs on Hitchcock’s Psycho). She’s set on waiting for him to graduate from medical school to get her gall bladder removed because “there are so many incompetents,” suggestively tells him that she will be “very lonely” when he goes away to college, and explains that tomorrow is the 10th anniversary of her divorce from his no-good father, for which she “waived” alimony payments in return for sole custody of Ronald (no pressure, kid).

After he gets a toolbox and an expensive marker set for his birthday, Ronald puts on his best jacket, slathers on some cologne, and flits next door to ask out his long-time crush, Laurie (Shelley Spurlock). As expected, she cruelly rejects Ronald’s shy advance, and he is cruelly mocked by the cool kids hanging in her pool (an obvious signifier of wealth in 1974). While slinking back to mom, he accidentally knocks Laurie’s sister Carol (Angela Hoffman) off her bike. Carol, like most girls in the ’70s, doesn’t take any shit, and she gives it to him straight: “You’re weird, Ronald… and so is your mother.” Enraged Ronnie squeezes her head with both hands and hurls her to the ground, where she hits her noggin on a cinder block and dies. Back home, he gives mom the sob story, adding that he has buried the body. Mom’s totally practical solution: she makes him seal off the downstairs bathroom (hello, new toolbox), where he will live in “decency and cleanliness” until the cops give up the chase.

While Ronald is supposed to be studying anatomy and trigonometry so that he can competently operate on his mother in 10 years, he would rather be illustrating his book, “The History of Atranta,” a medieval adventure starring Prince Norbert (Ronald) and Princess Fancetta (mom). “Your studies are far more important than fairy tales,” mom chides him, right before breaking the news that she has no choice: she must leave him for a week to get “immediate” surgery. Ronald, liberated from his homework and a future career as prison doctor, subsists on powdered milk, canned beans, and Atranta, before a realtor shows the Victorian house and we find out that, yes, mom has died. A new family soon moves in, a proper family, and good-looking mom and dad have three good-looking teenage daughters. Ronald drills several holes into the walls to spy on them, and sneaks out occasionally (there’s a secret passage in the kitchen pantry) to eat their food. His life-sized Atranta drawings soon plaster the walls and ceiling of his dungeon, and he decides that he will take the youngest of the daughters, Babs (Cindy Fisher), to be his new and improved Princess.

While many reviews describe Ronald as the prototypical “geek” or “nerd,” what’s interesting to me is that the terms would not come into popular usage until almost 10 years later. Ronald is not only a bespectacled introvert and social outcast, he is also the author of an interior fantasy world that he believes is real, and these “extraordinary visions,” as his mother sarcastically refers to them, lead directly to his mental deterioration and violent behavior. Thus, Ronald Wilby is sort of a cultural predecessor to Robbie Wheeling, the sensitive, tortured protagonist of another cult TV movie, 1982’s Mazes and Monsters. Based on the novel of the same name by Rona Jaffe, Mazes and Monsters is loosely based on the disappearance of mentally ill college student (and child prodigy) James Dallas Egbert III in 1979, which a private investigator blamed on Egbert’s interest in fantasy role-playing games. The incident sparked a moral panic around Dungeons & Dragons (the original version of which was published the year Bad Ronald came out), and portrayed the game as an addictive, regressive escapism to be conquered on the journey to responsible adulthood.

Bad Ronald is not exactly a good movie, but it is unforgettable: there is something deeply evocative, even allegorical, about this portrait of an abandoned boy doubly trapped (in the spare bathroom, in his mind), nibbling on chocolate bars as he covets the healthy, wealthy family he never had. And the direction—by Buzz Kulick, whose Brian’s Song (1971) is regularly cited as the high point of network television drama—does admit some nice flourishes, like when a circle of light from one of Ronald’s peepholes catches one of the girls in the eye, and she realizes she’s being watched. The house, the home, is the heart of the terror in both Rosemary’s Baby and The Exorcist, and so it is here. What is supposed to be private, what is supposed to be inviolate, isn’t always so—because we are all of us a broken family.

2 thoughts on “We Are All a Broken Family: The Hidden Terrors of ‘Bad Ronald’”