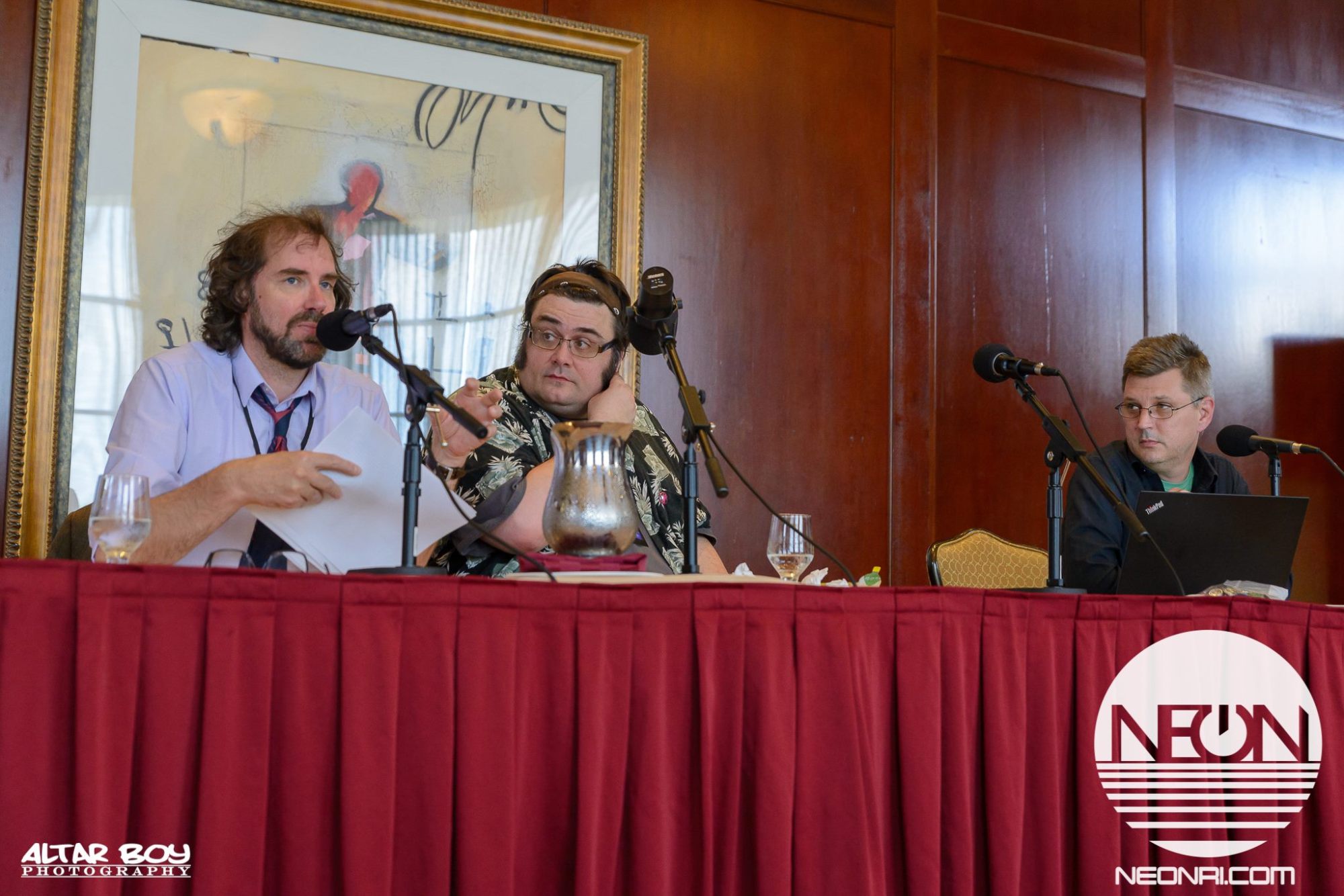 From left to right: “Action Man” McKenna, Grasso, and Roberts at the NEON Retrofuturism Festival, August 2018

ROBERTS: Gentlemen, this is our third Christmas here at We Are the Mutants. 2018 has been particularly rough on all of us. Our “real” jobs have been punishing, we’ve lost loved ones, we’ve been sick as dogs, our significant others have been sick as dogs, one of my kids was in the hospital (she’s okay!), and Donald Trump is still the motherfucking President. But we’re still here, and still publishing some of the best culture writing around (in my totally objective opinion). Three years! How do you guys feel about that? Give me a 2018 highlight reel.

GRASSO: I mean, we have to start with the NEON Retrofuturism Festival, don’t we? Three days filled with dozens of musical artists, films, video games, and panels (three of them moderated by your humble editors), and I finally got to meet the two of you in the flesh! Fascinating conversations, new friends, and many hotel bar libations… In all honesty, I have to say that the entire week or two around the festival were a huge highlight of my 2018, which mostly has otherwise focused on my trying to get this damn Master’s degree finished. NEON was the moment I felt like We Are the Mutants existed in the real world somehow; being able to talk to actual fans and readers and getting to meet you guys really made all the work we’ve done the past two-plus years feel tangible in some way. Richard?

MCKENNA: This year has been such a typhoon of events I can barely locate things in time, but actually forming at NEON, à la Voltron, was definitely one of the highlights. Meeting in person made this whole bizarre intercontinental undertaking feel less like a piece of lonely delusion and more like a, well, shared delusion. Like Mike says, it gave the whole thing a sort of tangibility that was difficult to imagine without us sharing the same ridiculously overpriced American breakfasts. Not that you’d guess that I was having fun from the flattering picture above, where I look like a nightmare grafting of all the Bee Gees’ faces onto a single, balding head. Anyway, this year I’ve really enjoyed watching the site take on a life of its own, as more people have started contributing, and it’s been very gratifying to feel that it’s continued to evolve, even though I’m not convinced that I have, unfortunately.

ROBERTS: Yeah, NEON was a riot. And a lot of work, especially by Mike, who assembled the slideshows (almost 400 slides!) from scratch, made sure everything was synced, ran the slideshows, kept us honest and on time. (And a special shout-out to NEON’s Tom Nimmo, who did an incredible job coordinating all the panels that weekend.) Anyway, I thought our panels went over really well (one of them may turn into a book), and I’m hoping there’s a NEON 2019, because I’ve already got some new ideas…

Meeting you guys was obviously the best part. Smartly, we all got together the day before the festival (our first panel was the morning of day one) and got drunk. I think we were all a little nervous about what would happen when we met IRL, as the kids say, but we just sort of fell into place with nary a moment of discomfort. I gave Richard a ton of shit, Richard gave me shit (but less cleverly), Mike was the sweetest fucking guy in the world, Richard asked 8 million questions about American food (Oh how I relish in the thought of his gastrointestinal shock after he ate a big bag of Flamin’ Hot Cheetos!). It was also lovely meeting Jenny, Mike’s better half, and Amy, and Mandy, all of whom have written kick-ass pieces for Mutants.

Honestly, I’ve never had an experience quite like NEON. I don’t much like leaving the house, and I hate crowds, and I hate traveling, and I hate cons (I’d been to only one before this), but NEON was built from the ground up to be different, and I felt at home—even though I had no idea what half of those kids were wearing, and I still wonder what that goat-head guy was yelling during his set. Would I have gone if you guys weren’t going? Probably not. But I wouldn’t be doing We Are the Mutants without you either. And NEON, like you both said, made the whole mission real. For me, it was a validation of all the work we’ve done so far.

GRASSO: Forget Flamin’ Hot Cheetos; we’re never splitting a bottle of Francis Ford Coppola wine again! I’ll just leave that there with no explanation. Anyway, let’s look back at 2018 on the site, huh? I’m going to openly admit that, for much of the second half of 2018, I was on the back foot while working on my Master’s capstone project, “Childhood Nostalgia, Museum Visitorship, and Constructivist Opportunities for Intergenerational Learning,” but that’s now sitting on my professor’s (virtual) desktop, hopefully the final piece of the insane scavenger hunt I’ve been on for the past four years of my life to get myself that little piece of paper with Artium Liberalium Magister printed on it. And then it’s off to a job in museums, maybe in a town near you.

But yes, We Are the Mutants in 2018! So many great pieces, so little time to tell you about all my favorites. And this in no way is a complete list, because every single one of the over 200 exhibits, reviews, features, and comics we’ve posted this year is special! But let’s start with Richard’s peerless paean to Mark E. Smith of The Fall. It ached with the wyrdness of Smith’s one-of-a-kind career, baked into the very bricks of the North of England (on that note, please also check out Richard’s positively haunted remembrance of the British fairground ghost train). The MES eulogies were thick on the ground following his death, and Richard’s was the very best I read, by a large margin. Kelly, your Amityville Horror piece continued your tradition of expert deconstruction of the horrors of the American family, both nuclear and national. And the two of you rocked your ongoing series on the original Judge Dredd strip. And all our new contributors! Mandy Leetch’s loving look at Harry Nilsson’s The Point! was a highlight, and knowing that Nilsson’s family read and appreciated the piece really meant a lot to me as editor. Claire Sewell’s feature on the Houston department store that was also a piece of classic postmodern architecture was just the kind of examination of this world’s out-of-place artifacts that I love. Sure, I may be biased, but Jenny Anckorn’s piece on 1980s playsets was witty and deep in that unique voice only she can provide. Daniel Cecil’s fascinating work on When Prophecy Fails is probably one of the most pertinent pieces we published, relating to our current age of political death cults. And as far as pieces of mine that I enjoyed putting together the most, I’m probably proudest of my look at Thomas Harris’s Red Dragon and its depictions of class in the New South, my examination of Twin Peaks: The Return as veiled Cold War historiography, and my three-part long-read epic series on the Cold War cetacean. Whew. Like I said, just a surface scan of the scores of pieces we published this year.

MCKENNA: God, it’s hard to know where to start—I hadn’t actually realized how much stuff we’d published until I started looking through the site. Mike, your study of Cetaceans in Cold War Science and Science Fiction was great, and I really enjoyed working with you on our examination of the enigma that is Phil Collins. I thought Amy’s insights into British women’s magazines of the 1970s and what they said about the society that birthed them were incredibly sharp and cast a lot of light on that period. And I loved Joseph Oldham’s feature on the fantastic British TV series Callan. Kelly’s careful examination of the club battleground scene from Terminator was also a high point. All told, I’ve loved watching the Mutants web grow, with so much of what we write intersecting in unexpected and interesting ways, and it would be great to keep bringing in new voices to expand that even more. So what’s the plan for 2019, boss?

ROBERTS: I just want to keep publishing and paying great writers, really. I’ve worked with so many over the last year, and we’ve got even more working on features right now for 2019. The goal is what it has always been: to be the definitive record of the weird, mostly forgotten artifacts of Cold War-era pop culture. That is always going to make us a “niche” site, I suppose, which makes it that much more important to have a diverse community of critical perspectives. One of my favorite pieces this year was Dan Elkind’s homage to underground illustrator Mark Beyer, who I knew almost nothing about until Dan’s piece! That is what I want. That’s why we’re in business. There’s so much out there from this period, lurking in the untended wastelands of the near past. My fear has never been running out of material. My fear is always that we are never going to dig up all of the treasures that deserve to bask in the light of day. (P.S. Three more 2018 favorites that haven’t been mentioned yet: Jimmy Andreakos on He-Man as a racist tyrant, Mike’s pristine piece on the occult novels of Watergate conspirator E. Howard Hunt, and Richard’s feature on how the clothes in The Terminator embody “authority, rebellion, and perceived ideas of freedom.“)

Last but most important: a great heaping thank you to all our subscribers on Patreon and PayPal. We’ve fallen behind on the podcast goal, I know, and I’m sorry—but the first one is done and coming soon! Honestly, we may have to adjust our goals going forward, because I’m not sure we can keep up this pace. (The “normie” world is unforgiving, my friends, and the freaks have to stick together.) With so many pitches coming in now, my hope is that 2019 will be a much smoother ride (knock wood), but we need money to pay all of these writers. So please, if you enjoy what we do, and if you’re able, support us! We cannot sustain We Are the Mutants without money—it’s a crass but unavoidable truth. Publishers and websites, both small and large, can no longer ask writers and editors to work for free. It isn’t right. Writing is work. Editing is work. Research is work. Art is work. Culture is work.

God save the mutants, and Happy Holidays to all!

3 thoughts on “Surviving the Cursed Earth: The Mutants Recap 2018”