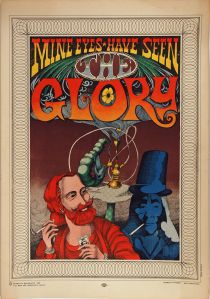 Berkeley Bonaparte was a Bay Area poster art company founded in 1967 by illustrators Rick Griffin, Alton Kelley, Victor Moscoso, Stanley Mouse, and Wes Wilson. The “Big Five,” as they came to be known, had developed a following designing posters to advertise local rock concerts, promoted by Bill Graham, at the Fillmore Auditorium and Avalon Ballroom. Many of these posters, for shows that are now the stuff of legend, became the backbone of the Berkeley Bonaparte line. While the company (or “collective,” as the owners described it) wasn’t the first to sell posters, it popularized the practice within youth culture, and the explosive colors and subversive flourishes virtually defined the psychedelic style. Soon the walls of every teen’s bedroom and college dorm room in the country hosted Middle Earth and “Can-a-blis.”

Many of these images are now—perhaps ironically—indelible Americana, including Bob Seidemann‘s photos of the Grateful Dead, Janis Joplin, and Big Brother and the Holding Company; Rick Griffin’s “Flying Eyeball” poster (inspired by a Von Dutch design from the 1950s) for a Jimi Hendrix Experience performance at the Fillmore in 1968; and Griffin’s “Huichol Indian.” Also included in the catalog are fantasy prints by Joel Beck, riding the cresting popularity of The Lord of the Rings, and a series of “color-in” posters, which influenced the development of more innovative coloring books (or “albums”) like those published by Troubador Press, as well as the poster art sets that became ubiquitous in the 1970s and 1980s.

Berkeley Bonaparte posters were cannily advertised in underground and progressive newspapers, as well as mainstream publications like Billboard. A spot in the personals section of a 1967 issue of The Nation runs simply: “Ho Chi Minh, Trotsky, Oscar Wilde, Dostoevsky, Lenin, Rodin. Also four-color psychedelic dance posters… and Acid Man” (at $1.00 each plus 5¢ handling). After a number of objections to the the poster as a crass material “thing,” Berkeley Bonaparte’s output was defended in 1968’s The Great Poster Trip: “But this commercial enterprise is unique: advertising to join the mutants and leave the world.”