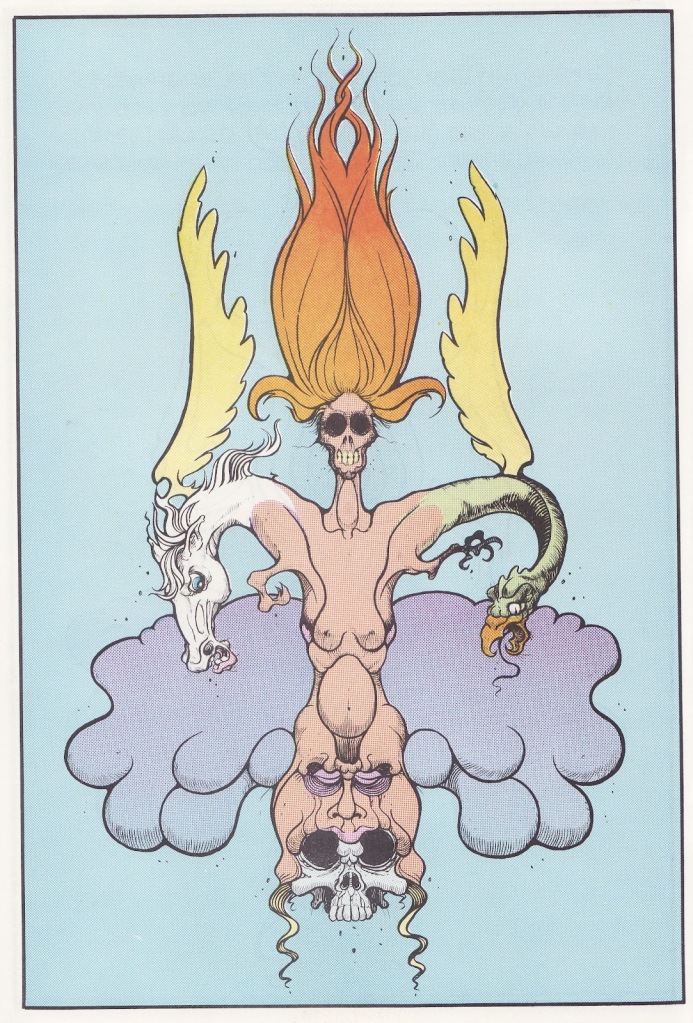 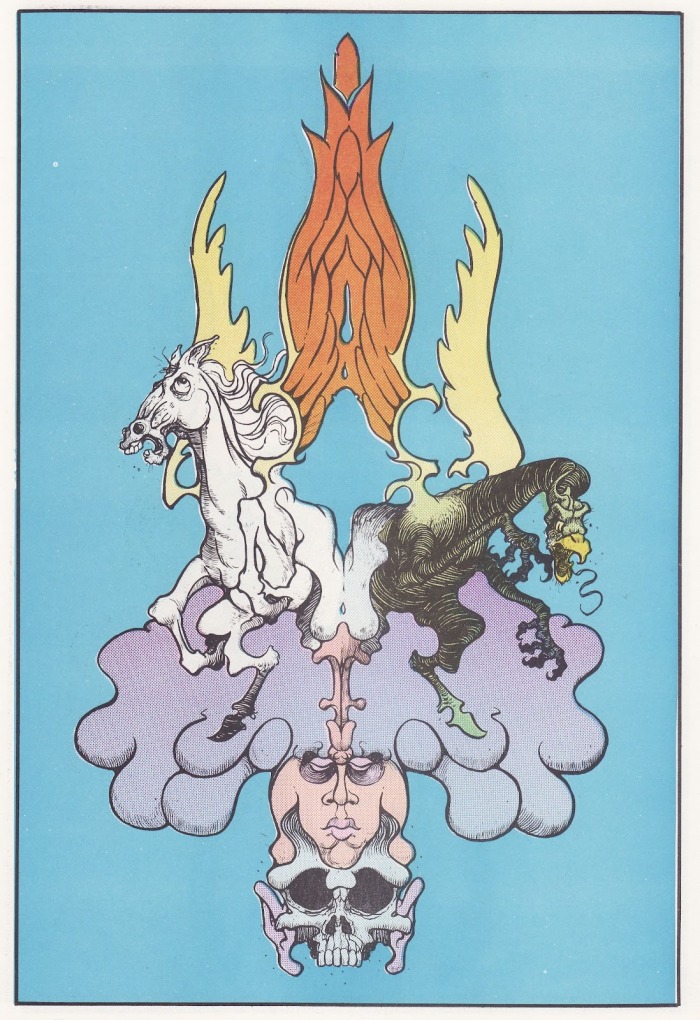 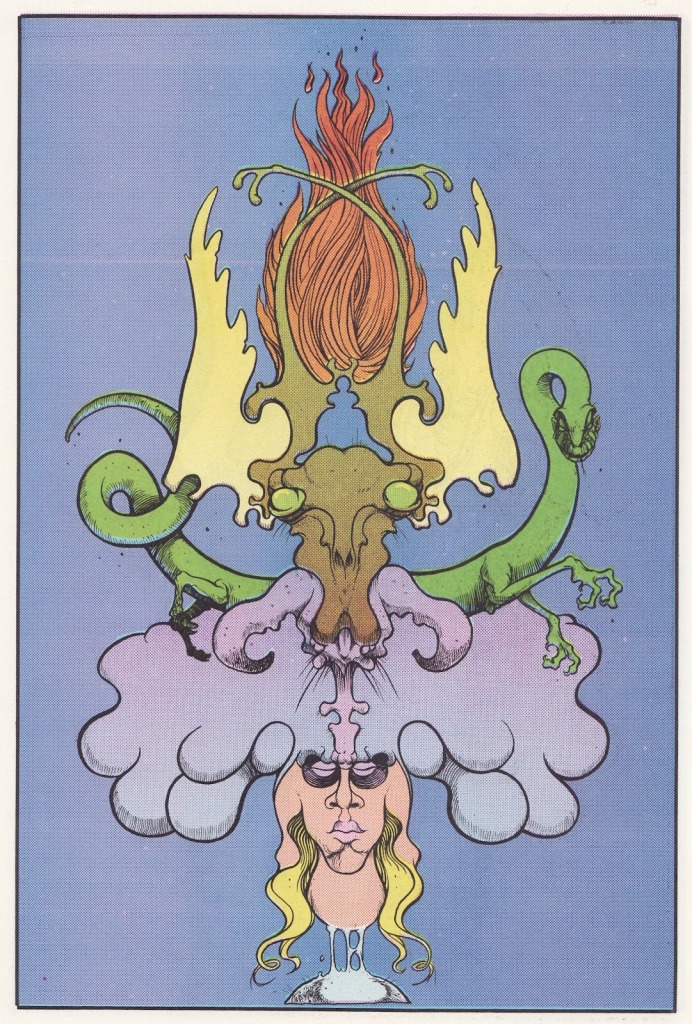 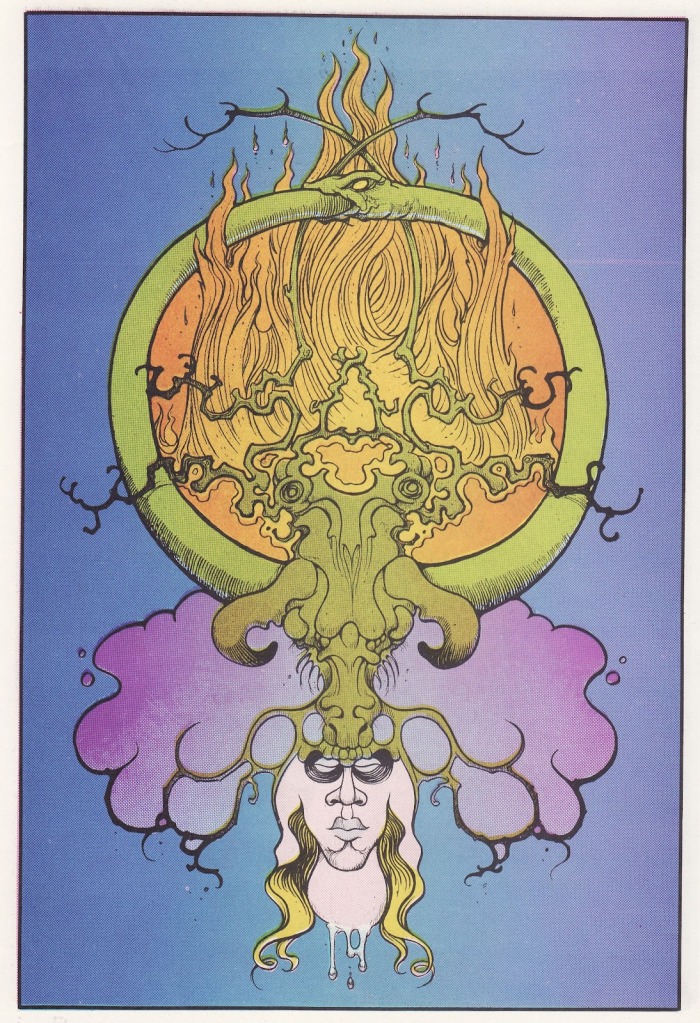 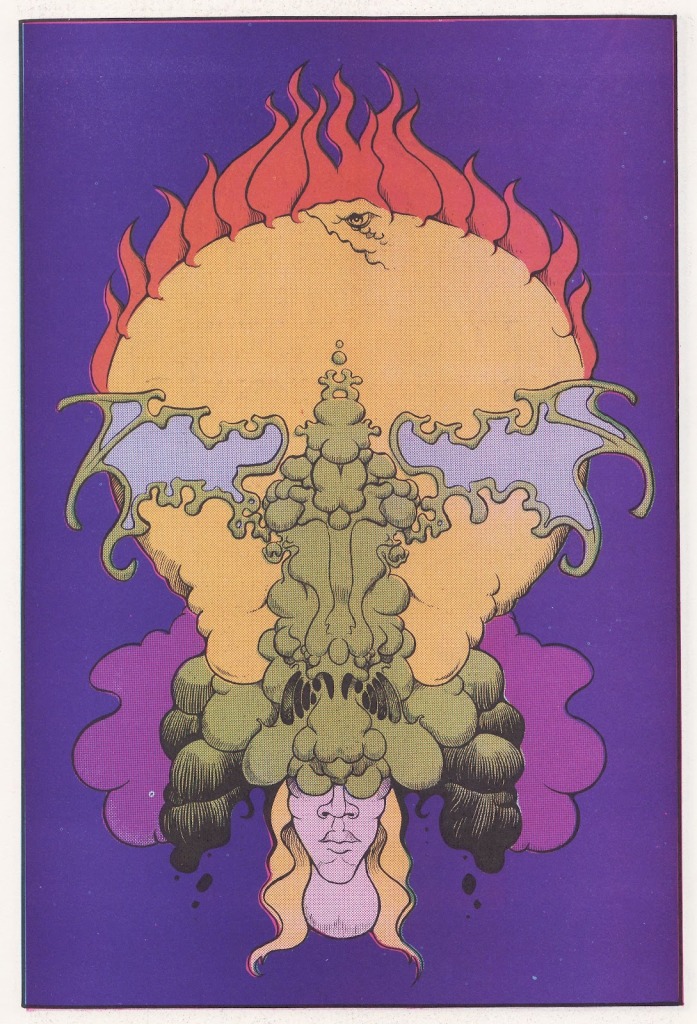 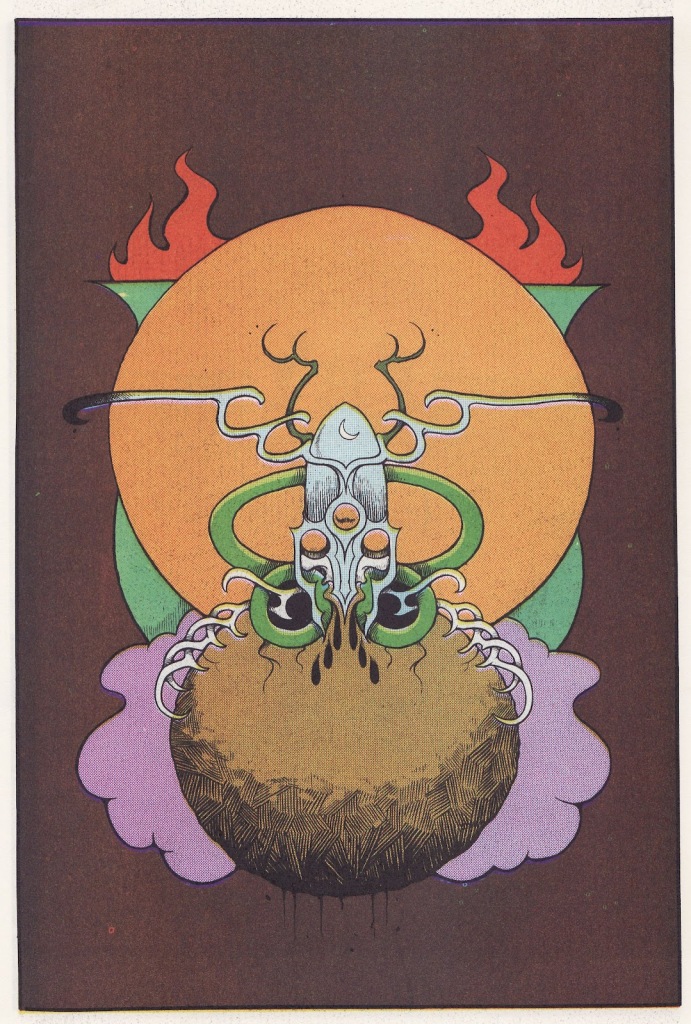 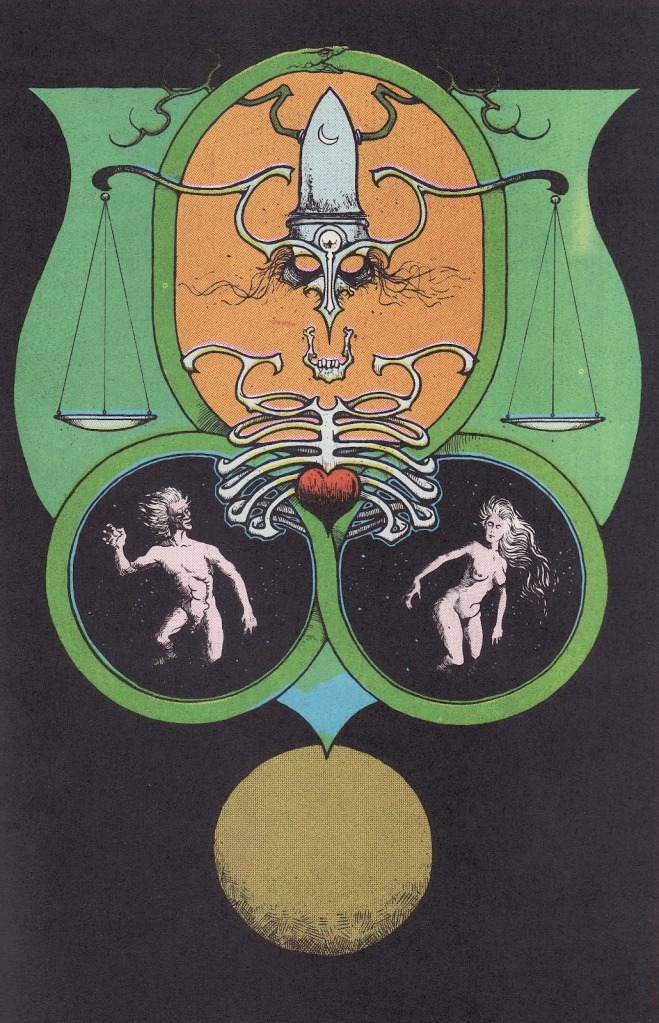 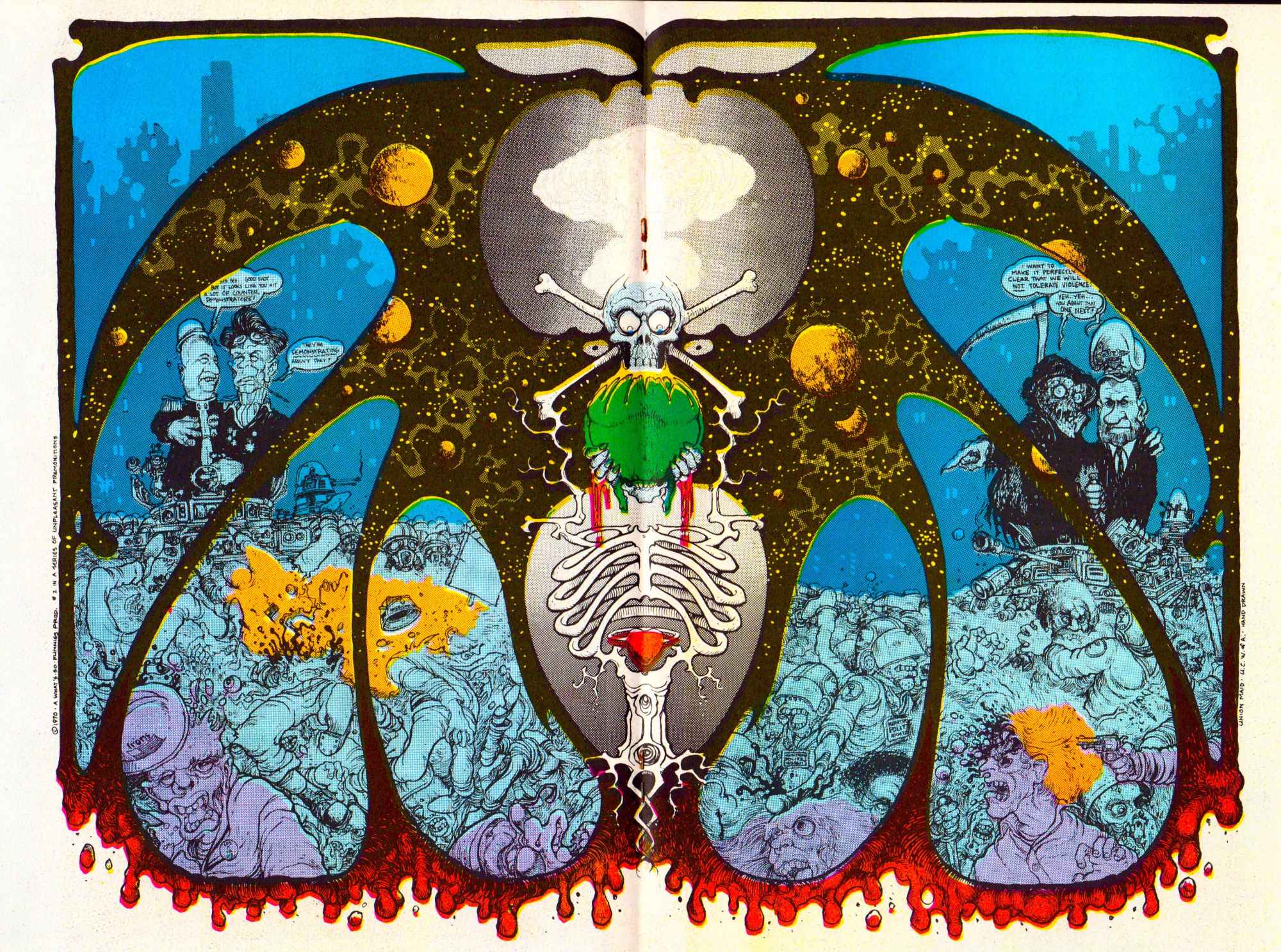 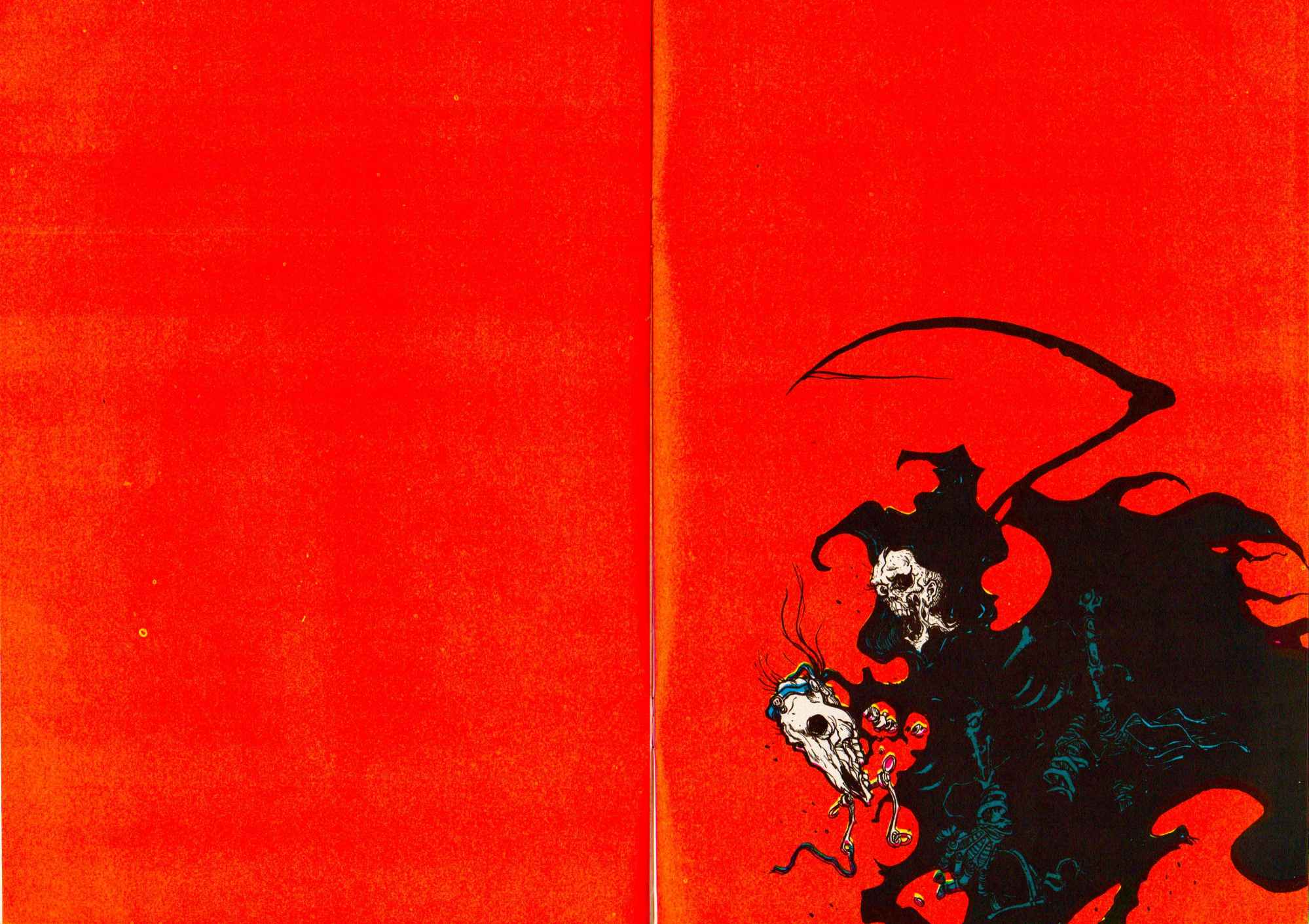 Despite a tragically short life, and despite still being almost completely unknown, Greg Irons has exerted an extraordinary influence on the course of underground and mainstream comics, graphic design, and the tattoo world, where he is regularly regarded as a legend. Irons was born in Philadelphia in 1947 and moved to San Francisco during 1967’s Summer of Love, where he immediately found work designing event posters for music promoter Bill Graham and others. Later that year, Irons traveled to Europe, taking a gig in London as an “art slave” on the animation team for the Beatles’ film adaptation of Yellow Submarine (1968). Irons moved back to San Francisco in 1969 and, with the help of Rick Griffin and Robert Crumb, he soon became a prominent figure in the thriving underground comix scene, starting with his first solo effort, 1970’s Heavy Tragi-Comics. He also contributed to Skull Comics, Corporate Crime Comics, Slow Death, Deviant Slice, Bogeyman, and Yellow Dog, his style a relentless combination of horror and satire, a radical twist on the EC comics he grew up reading.

Light, or Light Comitragies, is loosely based on his friend and frequent collaborator Tom Veitch’s experimental novel The Luis Armed Story, initially self-published in 1965, about (I use the world loosely) a young drug addict who returns to his Midwestern hometown just in time for the Biblical apocalypse. The comic, with the exception of an excerpt from Veitch’s book, is an illustrative description (graphic experience?) of the disintegration not only of the physical world, but the mental one as well, and the blossoming of a new, higher consciousness in its place. To say that Light is “psychedelic” is a bit of a cop out. It’s part living Rorschach test, part Jack Kirby-esque innovation (not the first time Irons channeled Marvel Comics), and part philosophical rumination on and repudiation of humanity’s endless capacity for violence and cruelty. The only thing I can think to compare it to is Gerald Scarfe’s animated sequences on Pink Floyd’s 1982 film The Wall. But, really, there is nothing to compare it to. The vision is singular, and total.

The closest Irons ever got to mainstream recognition was The Official Advanced Dungeons & Dragons Coloring Album, published by San Francisco’s Troubador Press in 1979. The publisher’s founder and owner, Malcolm Whyte, was a longtime admirer of underground comix (he started the Cartoon Art Museum in 1984), and routinely employed the young, offbeat artists who made them. Irons brilliantly illustrated every bit of the D&D book, including the 3-D dungeon that accompanied the one-off game designed by Gary Gygax.

One thought on “Apocalypse, Rinse, Repeat: The Graphic Experience of Greg Irons’ ‘Light’”