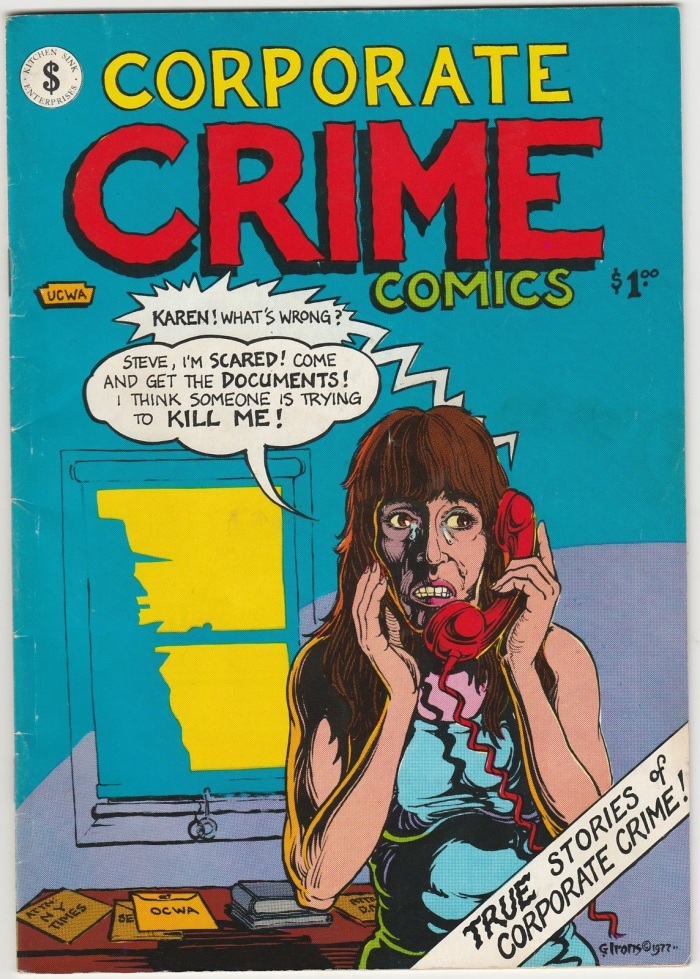 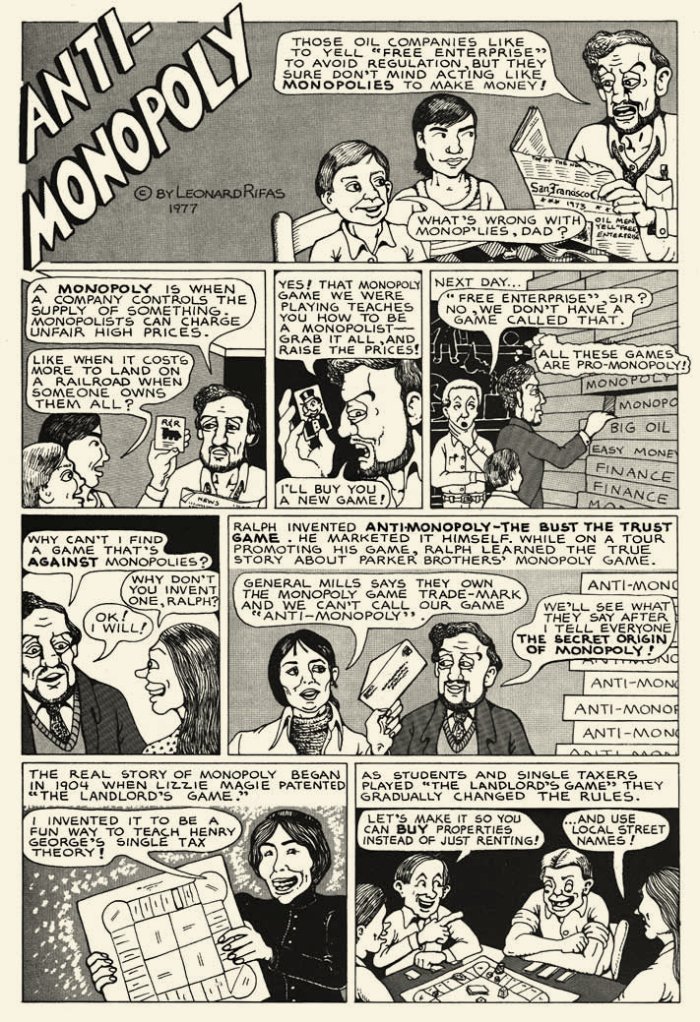 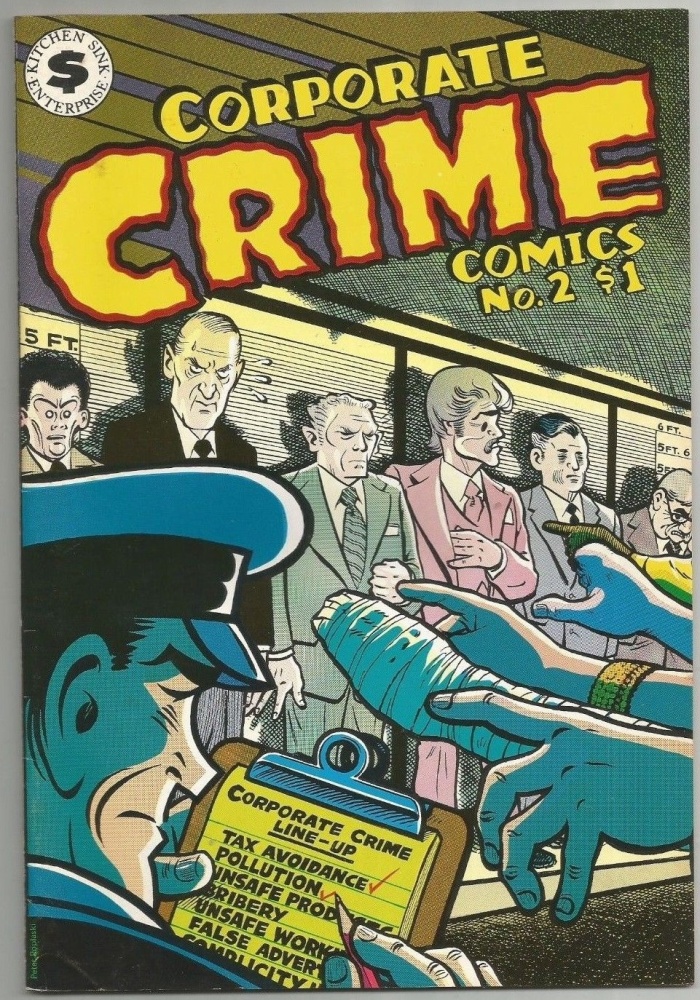 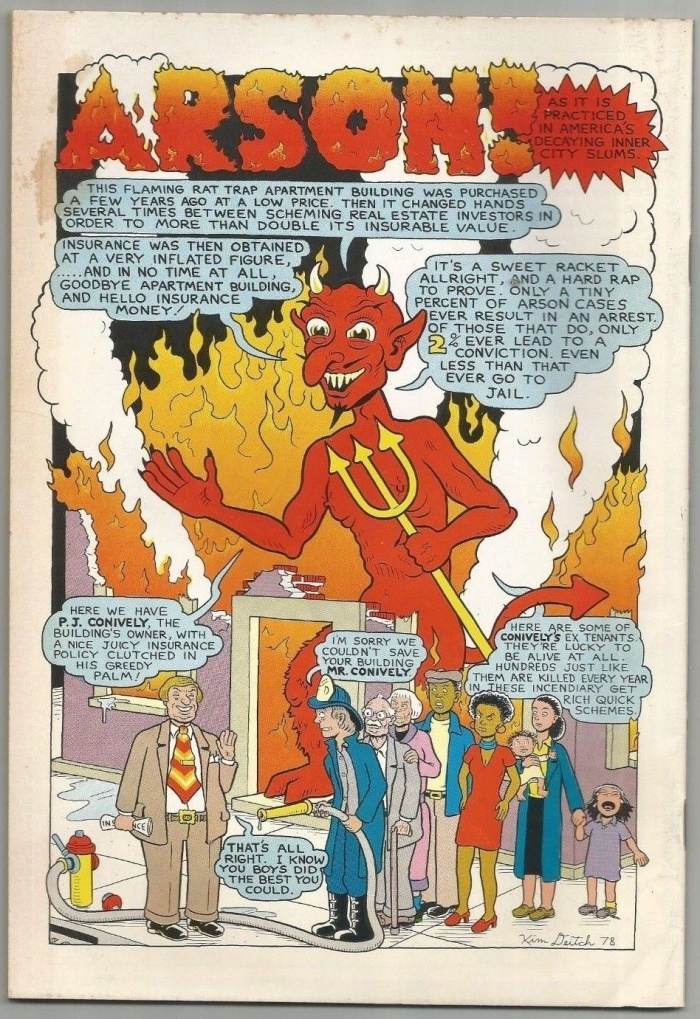 Edited by underground writer-cartoonist Leonard Rifas and published by Denis Kitchen’s Kitchen Sink Press, both issues of Corporate Crime Comics present a “collection of corporate atrocity stories” written and illustrated by a variety of prominent voices in the underground comix scene, including Greg Irons, Trina Robbins, Kim Deitch, Jay Kinney, Larry Rippee, and both Leonard Rifas and Denis Kitchen. The first issue (1977) features a story on Karen Silkwood (featured on the Greg Irons-illustrated cover), who was contaminated with plutonium while working for a nuclear fuel plant and died in a car crash shortly after testifying to the Atomic Energy Commission about the incident. (She was on her way to talk to a New York Times reporter when she crashed.) The story went on to gain national attention thanks to the 1983 film adaptation Silkwood, which starred Meryl Streep and was nominated for five Oscars. Other stories target nursing home corruption, “Racist TV,” the Dalkon Shield, monopolies, and the Teapot Dome Scandal.

The second issue (1979) takes on landlord arson, dioxin poisoning, Richard Nixon, and union busting. “The J.P. Stevens Story” follows Crystal Lee Sutton, a young woman whose efforts to unionize mill workers in a North Carolina textile plant (owned by J.P. Stevens) got her fired, but eventually led to a settlement between J.P. Stevens and the Amalgamated Clothing Workers of America (ACWA). The story was dramatized in Martin Ritt’s Norma Rae (1979), based on Sutton’s life and starring Sally Field in an Academy Award-winning performance.

The comics garnered some critical attention at the time and sold well, but were never collected into book form because, according to Kitchen’s site, publishers feared “corporate lawsuits.”