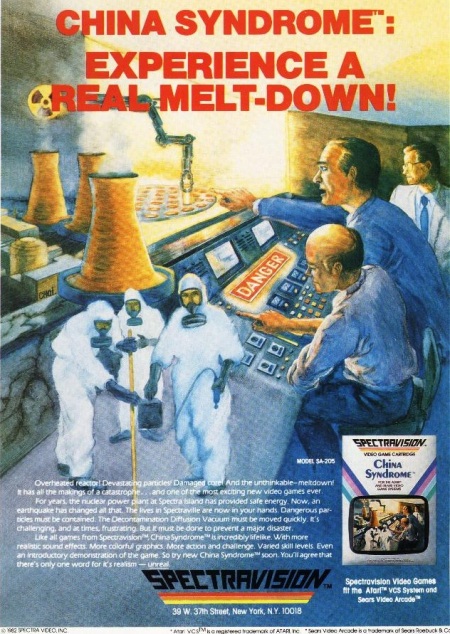 After a partial nuclear meltdown occurred at the Three Mile Island nuclear power plant only days before the release of a 1979 film discussing just that possibility, the term “China Syndrome”—used by nuclear power experts to describe a hypothetical scenario in which an overheating reactor core melted its way to the other side of the planet—quickly passed into common usage, familiarizing all with the horrifying possibility.

The dangers of nuclear energy were treated in various video games throughout the 1980s, starting with Atari’s Scram (1981), a game that asked players to effect the emergency shutdown of a reactor, the titular SCRAM (an industry acronym variously cited as meaning Safety Control Axe Man or Safety Cut Rope Axe Man, both of which may be apocryphal). In 1982, the emerging genre was expanded by Spectravision’s China Syndrome, a game that invited players to recover “dangerous radioactive particles” and restore normal operations at the “Spectra Island” nuclear power facility, which “has been providing efficient low cost power to the residents of Spectraville.” The China Syndrome guidebook offered “additional versions for young children.”