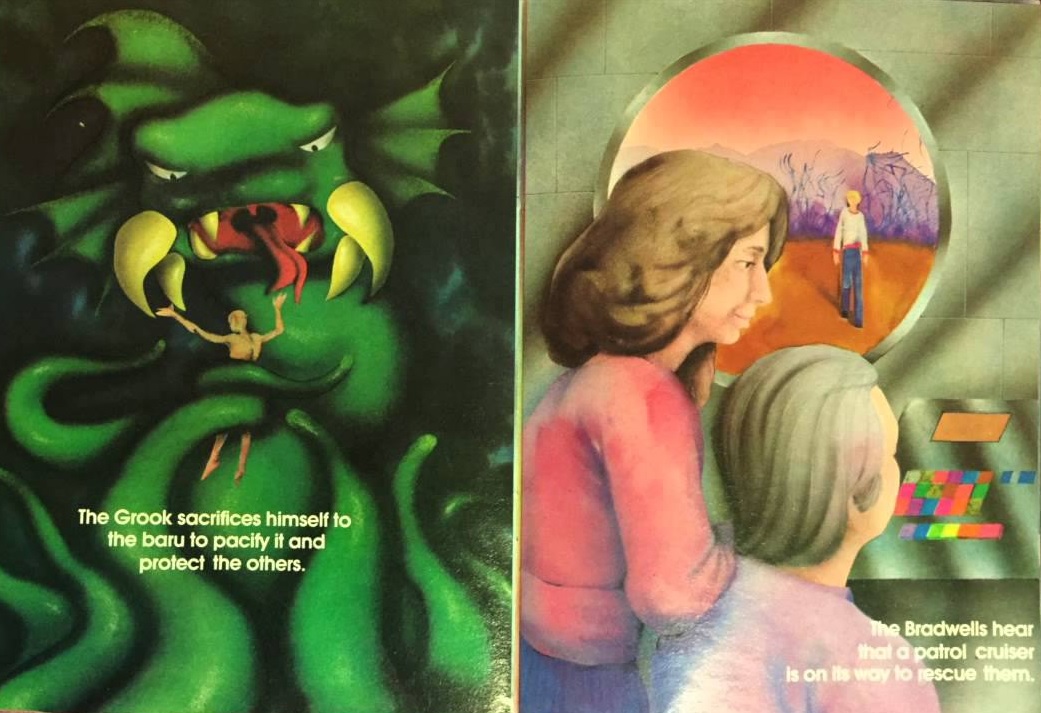 “Brace yourself for an exciting, realistic sight and sound journey into another world…” Such was the promise emblazoned on the star-spangled blue packaging of the AudiSee titles, a series of “stereo dramatizations,” science-fiction audiobooks on cassette, each accompanied by a glossy, full-color illustrated booklet. Released in 1978 and riding on the cash tsunami of post-Star Wars galactic hysteria, they were produced by Bonneville Productions, a broadcasting and media company from Salt Lake City owned by The Church of Jesus Christ of Latter-day Saints (Mormons) through its for-profit arm, the Deseret Management Corporation, which took its name from the lake that covered much of modern-day Utah in prehistoric times. Each AudiSee drama was roughly 30 minutes long, and a “computer tone” told listeners when to flip to the next page of the booklet as the story unfolded. They were marketed to children between the ages of eight and twelve, and the series comprised six titles: H.G. Wells’ Voyage to the Center of The Earth, The Time Machine, and The War of the Worlds, as well as three books by American science fiction author Raymond F. Jones: The Lost Ones (adapted from his Renegades of Time from 1975), The Star Prince (adapted from The King of Eolim, also from 1975), and The Rebels Of Empiria. Jones, himself a Mormon, and best known for the film version of his 1952 novel This Island Earth, adapted his own books for the series.

Casts included seasoned (and, for the most part, Mormon) actors such as Ken Sansom (Hound in the Transformers TV series), Gene Pack (The Animated Book of Mormon TV Series), Nancy Borgenicht (Mrs. Randall in Silent Night, Deadly Night), Judy Mancini, who appeared in the 1977 Jimmy Osmond vehicle The Great Brain, and Michael Ruud, a stalwart of the Mormon-financed film factory Sunn Classic Pictures. The producer of the series was Lawrence “Larry” Tamblyn, lead vocalist and keyboardist of proto-punk garage rockers the Standells. Tamblyn also adapted Voyage to the Center of the Earth, and The Time Machine features the voice of his brother Russ—star of Robert Wise’s The Haunting and David Lynch’s Twin Peaks, to name only two of many roles. 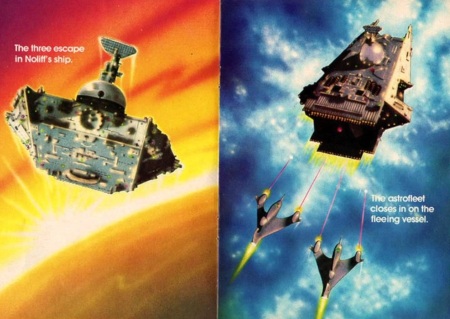 Despite apparently being adapted from another of Jones’ stories, with its title and cover showing a Death Star-like starship and gun-toting robot whose canine muzzle gives it more than a passing resemblance to the Death Star droid, The Rebels Of Empiria is the one that makes the most blatant play to capitalize on Star Wars‘ popularity, some of the pictures in the booklet even mimicking scenes from the film. After a pulpy introduction in the vein of Lucas’ famous opening crawl (a similar summary begins all six tales) describing the collapse of the political system of ‘galaxracy’ (the dry factuality of which resembles with some degree of foresight the dull economics of the Star Wars prequels), Empiria begins with a mysterious ship swallowing up the spacecraft carrying Emperor Creo and his daughter, the Princess Nola. What follows is a tale of intergalactic derring-do that stars a cast of archetypal Alex Raymond characters redressed in the robes and waistcoats of a new generation’s space faring heroes. The second Jones adaptation, The Star Prince, is a more thoughtful affair that tells of the adventures of the Bradwell family who, marooned on a distant world, encounter and forge a relationship with the Grooks, alien creatures with ping-pong eyes.

Both the Wells stories follow the originals reasonably closely. The biggest change in the War of the Worlds adaptation, apart from its futuristic setting and “robot wives,” is the demented-looking tripods that resemble huge, flat remote controls wobbling on cable-like legs. Despite its title, Voyage to the Center of the Earth has little to do with Jules Verne’s Voyage au centre de la Terre (1864), which certainly didn’t begin with a flying saucer butchering an old couple’s livestock (shown in vivid detail in the booklet). The crew of a craft drilling into the seabed beneath the area of ocean known as the “devil’s triangle” in order to investigate huge caverns beneath the earth’s crust encounter giant spiders, dinosaurs, ruined civilizations, and marooned aliens unwillingly brought to earth as a side effect of the dimension-hopping of the Zarians—transparent octopi who rely on space-suited slaves to carry them about.

In the last and probably most successful of the six, The Lost Ones, protagonist Joel, while out looking for his friend Will in a blizzard, is accidentally responsible for teleporting a beautiful star traveler into the hands of cruel alien slavers the Bakori, forcing the two friends off on a mission to rescue her. The endeavor will cost Will his life in a genuinely spooky scene. 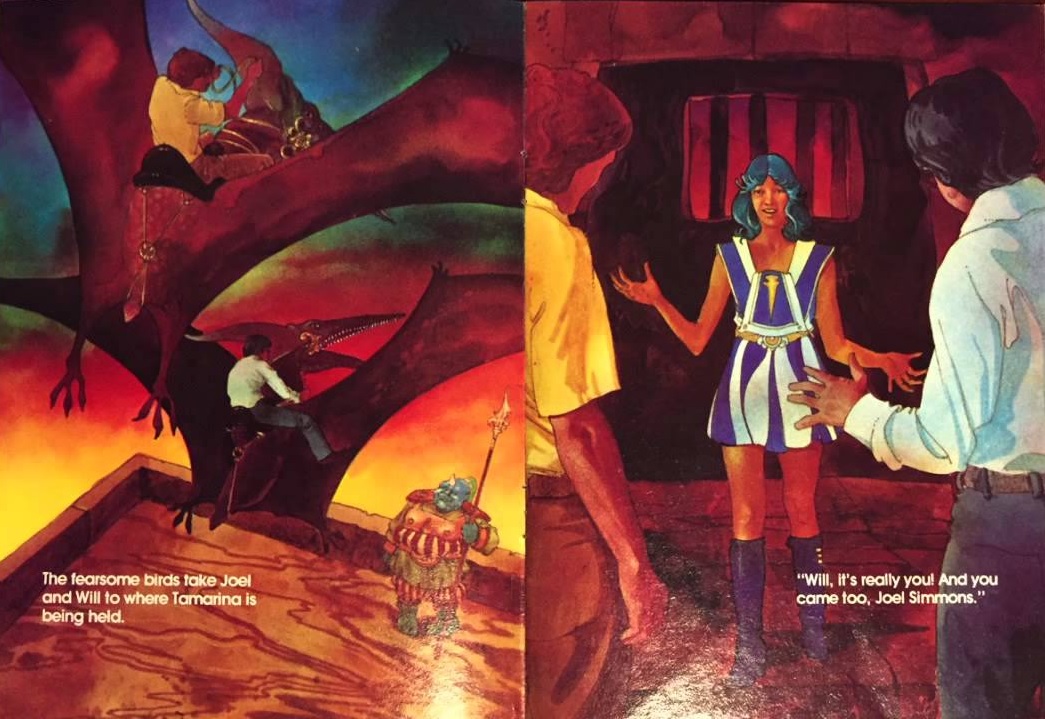 The booklets were a potent sensory assault upon young eyes, and the artists involved seemed to have been encouraged to create memorably colorful imagery in a range of techniques, including airbrushed photographs of model spacecraft. The dramas themselves are as enjoyable as they are odd, managing somehow to compress a surprising amount of fast-paced action and scope into their brief running times. By the early 1980s, the AudiSee books had made their way across the Atlantic to British discount end-of-line stores like Pennywise where, along with LPs by Tomita and Rondo Veneziano, they were available for derisory prices, a couple of pounds usually enough to buy all six.

The Mormons were a surprisingly potent force in the science-fiction landscape of the 1970s and ’80s: in addition to marginal enterprises like Bonneville Productions and Sunn Classic Pictures (The Outer Space Connection, In Search of Noah’s Ark), influential LDS figures involved in sci-fi included Gary Kurtz, the producer of Star Wars, prolific TV and film producer Glenn A. Larson, and writer Orson Scott Card. One widespread rumor even affirmed that wizened gnomic guru Yoda was actually based upon Spencer Woolley Kimball, the twelfth president of the LDS, who famously told his followers to “Just do it.” The rumor is denied by those involved in the film. Creature effects artist Nick Maley, who worked on Yoda, claimed that the story may have had its roots in “the fact that there was a Mormon involvement in [The Empire Strikes Back]… and we certainly had Mormons being given tours of the studio.” 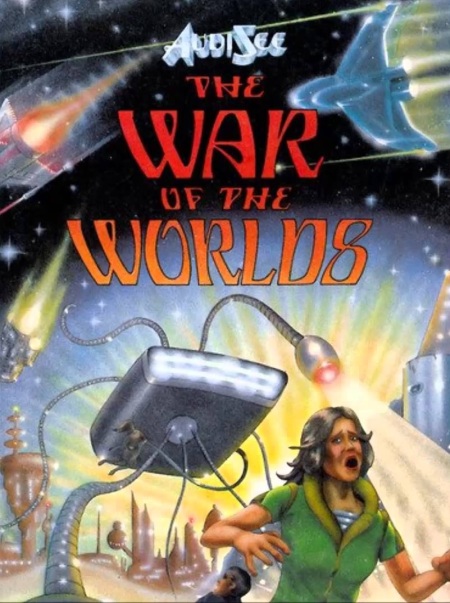 Mormon scholar Terry Givens posits a possible reason for this inclination toward speculative fiction: “Science fiction… is the literary form best suited to the exposition and exploration of ideas at the margins of conventional thinking, whether in technology, ethics, politics, or religion,” he says, citing the Mormon belief in apotheosis—“that men and women can progress to the point of becoming divine beings”—and God’s creation of extraterrestrial worlds and creatures. LDS writer Scott Parkin claims that, because Mormons are generally comfortable with rational explanations (even of that most irrational of things, God), they are happier to integrate them with their religious faith and to engage with science than followers of other religions, who might see similar proximity to objectivity as a threat.

Another factor may be that, like Scientology (also a religion which has strong ties with science fiction, in that it is arguably an example of it), the creation of the Mormon faith was itself an act of vast imaginative power that took place in a world already changed—and still rapidly changing—thanks to the industrial revolution. And though part of the Latter-day Saints’ tenet lay in resistance to the values of industrial capitalism, it was inevitably forced to engage and cohabit with it in ways that must have informed the eventual development of the Mormon relationship with extra-canonical imaginative literature.

Whatever the truth, this intersection of unscrupulous commerce with a dogmatic belief in supernatural entities—a paradox at the heart of every Western religion in the capitalist age—resulted in memorably winning works of pop art. The unmoderated sincerity of the AudiSee products (a galaxy far removed from ersatz modern-day efforts, hobbled as they are by the wide open Pandora’s box of postmodernity) and their pleasantly eccentric aesthetic give them a strangely powerful resonance that holds up today.

4 thoughts on “Temples Among the Stars: AudiSee Adventures and the Mormon Sci-Fi Connection”