“One of the finest things there is, at dawn: the Santa Monica pier, with the white waves rolling in, the sky grey over Venice, the pale green or turquoise hotel overlooking the sands, and the endless line of run-down motels with their grimy little lamps, their graffiti-covered walls. The first waves, already frequented by a few insomniac surfers, the oh-so-melancholy palm trees with their Roaring Twenties grace, and the merry-go-round. The bay that bends round towards Long Beach is as vast as the Bay of Ipanema in Rio, the only one of comparable size. But, unlike Rio with its proud, luxurious, and pretentious (though none the less beautiful) sea front, here the town ends almost in a piece of wasteground at the ocean, like a seaside suburb. And it has indeed the hazy charm of such a suburb. Here at dawn, it is one of the most insignificant shorelines in the world, just a place to go fishing. The Western World ends on a shore devoid of all signification, like a journey that loses all meaning when it reaches its end.”
—Jean Baudrillard, America, 1986

In the early 1980s, French philosopher, media theorist, and cultural scholar Jean Baudrillard visited the United States several times, taking in the vastness of the continent-spanning nation, from Manhattan to Manhattan Beach. In 1986, his account of these trips, America, was published in France. Two years later, the book came to the US in a translated edition. In the work, Baudrillard ruminates upon Mormons and breakdancers, fitness nuts and canned laughter on television, upon all of the sources of beauty and horror of American culture and society in the 1980s. Baudrillard’s prose itself, which flips from arch to sincere sometimes in the course of a single sentence, embodies all these contradictions and paradoxes. The most technologically advanced nation on Earth, Baudrillard remarks early on, “is the only remaining primitive society” (italics in original), “lacking a past” upon which it can meditate, constantly moving forward into the future, simultaneously riven and united by its staggering diversity in peoples and landscapes. Viewing American society as a European outsider, Baudrillard constantly returns in America to the momentous weight of the past—in terms of physical landscape, politics, and ideology—that presses down upon old Europe but is staggeringly absent in this optimistic, manic, young nation.

In between his visits in America to the major twin metropolises on opposite coasts, New York City and Los Angeles, Baudrillard makes stops in San Antonio (the Alamo’s enshrinement as a historic site causing Baudrillard to wryly note that “today it is [Mexico’s] grandchildren and great-grandchildren who are there, on the same battlefield, to hymn the Americans who stole their lands”) and in Salt Lake City: “The Christ-topped dome (all the Christs here are copied from Thorwaldsen’s and look like Bjorn Borg) straight out of Close Encounters: religion as special effects.” In fact the whole city has the transparency and supernatural, otherworldly cleanness of a thing from outer space.” But even with his love of Los Angeles’s “limitless horizontality,” its freeways and neon and endless beaches, and of the “verticality” of Manhattan, and all the performative madness of New Yorkers—breakdancers, homeless, and marathon runners all—it is obvious that it is the desert that mystifies and fascinates Baudrillard most.

For Baudrillard, the desert is America in its purest, clearest incarnation. The desert is tabula rasa, echoing and reflecting the history-less nation that settled it. Baudrillard likens the blankness of the American desert to a quintessentially American cinematic reflection of the real world. “Nature itself pulled off the finest of its special effects here, long before men came on the scene,” Baudrillard says. The American desert retains the old Christian whiff of asceticism, Baudrillard states, but with a Puritan psychology that’s found at the nation’s root: “America always gives me a feeling of real asceticism. Culture, politics—and sexuality too—are seen exclusively in terms of the desert, which here assumes the status of a primal scene. Everything disappears before that desert vision.” This blank canvas recapitulates the distance that Americans maintain from each other, socially and politically: “The inhumanity of our ulterior, asocial, superficial world immediately finds its aesthetic form here, its ecstatic form. For the desert is simply that: an ecstatic critique of culture, an ecstatic form of disappearance.” Baudrillard wonders if the centrality of the desert in the American mental and physical landscape has to do with a sublimated American wish for a world empty of human beings: “If humanity’s language, technology, and buildings are an extension of its constructive faculties, the desert alone is an extension of its capacity for absence, the ideal schema of humanity’s disappearance.” Given the mythic importance of the American desert in the invention of America’s own singular humanity-ending weapon, it seems this primal American wish for a desert of extinction is hardly sublimated. 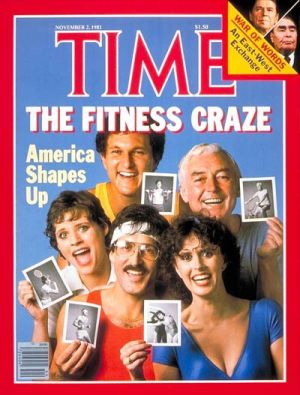 Baudrillard’s most famous work, Simulacres et Simulation (1981), focuses on this postmodern, hypercapitalist wilderness of images and reflections. In America, Baudrillard applies his theory of simulacra to the actual screen-filled streets and vast, empty wastelands of his subject. Throughout the book’s longest chapter, he states his search for “l’Amérique sidérale,” which translator Chris Turner renders as “Astral America,” but could also easily be translated as “starry America”: a vast sky, a blank dome upon which tiny points of light sparkle. “Sideration. Star-blasted, horizontally by the car, altitudinally by the plane, electronically by television, geologically by deserts, stereolithically by the megalopoloi, transpolitically by the power game, the power museum that America has become for the whole world.” How have Americans populated this vast emptiness? With lines of force and power: highways, power lines, borders, boundaries pulsing with power. Baudrillard again returns to Los Angeles and the approach by air: “There is nothing to match flying over Los Angeles by night. A sort of luminous, geometric, incandescent immensity, stretching as far as the eye can see, bursting out from the cracks in the clouds… This [city] condenses by night the entire future geometry of the networks of human relations, gleaming in their abstraction, luminous in their extension, astral in their reproduction to infinity.” Here we see the seductive power of American landscapes on Baudrillard, the beauty that mingles with the horror vacui at the center of America’s being.

Out of the realm of abstractions, when Baudrillard encounters the actual inhabitants of this “astral” nation, he finds a people who have internalized this blank canvas onto their own landscapes, minds, and even bodies. A Frenchman may come to America and analyze the nation endlessly, with all the weight of Old World philosophy, politics, and history upon him, but, according to Baudrillard, “This is the only country which gives you the opportunity to be so brutally naive: things, faces, skies, and deserts are expected to be simply what they are. This is the land of the ‘just as it is’.” And with that newness comes a power to reshape the self, in body if not mind. As Baudrillard visits America at the peak of the fitness craze, he looks upon the movement as just another American cult. Joggers are sleepwalkers, according to Baudrillard: “All these track-suits and jogging suits, these loose-fitting shorts and baggy cotton shirts, these ‘easy clothes’ are actually old bits of nightwear, and all these relaxed walkers and runners have not yet left the night behind.” In America’s extremes of fitness and obesity, Baudrillard finds the true meaning behind the paradox: both the jogger and the obese long for “the ecstasy of the full body.” Even in America’s (now long-vanished) reputation for gleaming smiles is another example of the American cultural blank screen: “Americans may have no identity, but they do have wonderful teeth.” The American obsession with quantification, surveillance, and thrift finds expression in Baudrillard’s examination of consumer culture and 1980s scares over consumer products and child abductions: “Supermarket carrier bags are adorned with the portraits of missing children.” American bounty, in the form of the supermarket, has signified loss of direction and control in sources as disparate as the Clash’s “Lost In the Supermarket” (1979) and the empty recitation of brand names over the supermarket PA in Don DeLillo’s White Noise (1985).

What about the actual blank screens into which Americans gazed? The television looms large in a work that mostly focuses on the built and natural landscape, but this is the era where television’s reach arguably found its zenith in American culture and the economy. Baudrillard takes his analysis of the omnipresence of canned laughter on American television further than mere kitsch: canned laughter has “taken the place of the chorus in Greek tragedy. It is the monster from Alien prowling around in all the corridors of the spaceship. It is the sarcastic exhilaration of a puritan culture.” Not even joy is left to the American to manage; it is managed for them. 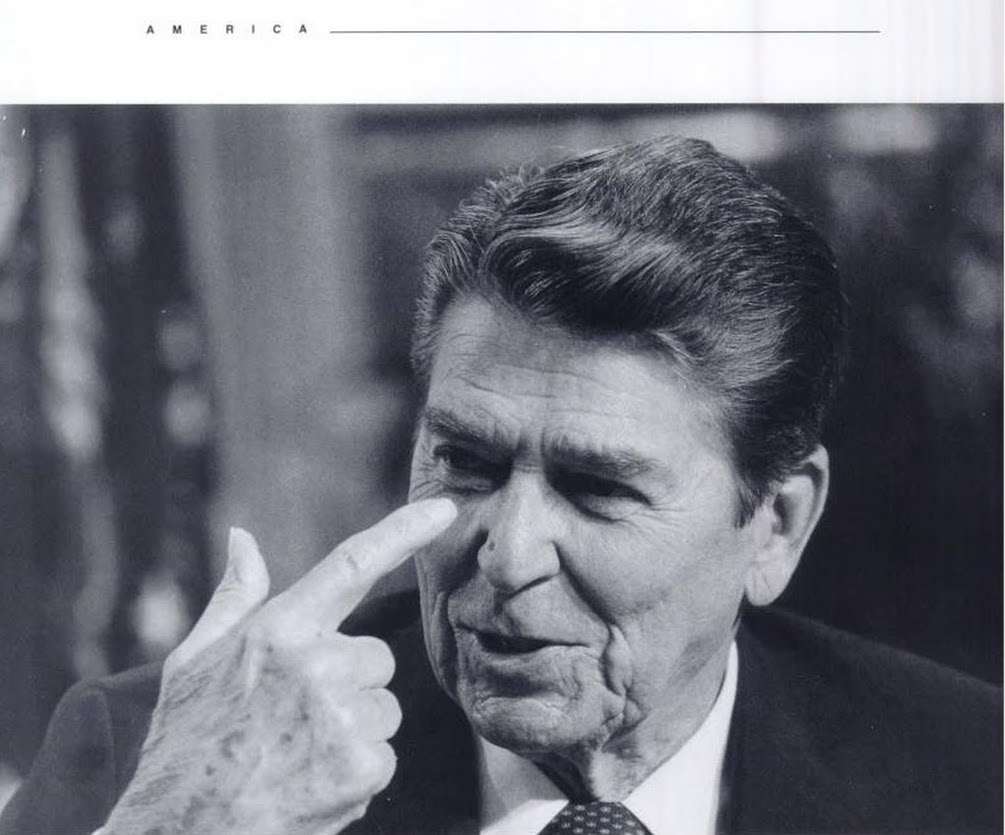 Which brings us to the face most often gazing out, paternally, from those 1980s television screens. “In the image of Reagan,” Baudrillard states, “the whole of America has become Californian.” The “morning in America” that Reagan promised in 1984 is yet another screen upon which the American citizen can project their own hopes and dreams. This even means consciously forgetting the promise of revolution in the Baby Boomer generation’s rebellion against war and injustice. The pursuit of happiness, rather than of justice, became the American creed in the 1980s. It was not just the World War II generation that wanted to go back to the ’50s by electing Ronald Reagan; it was the Boomers too. “The Yuppies,” Baudrillard fairly spits: “Their joyous readaptation sings out in their very name. There has been no heart-rending reappraisal to separate them from the preceding generation, just an excision, an amnesia, an absolution—the mildly unreal process of forgetting that follows an event that is too intense to deal with.” The Boomers were doomed from the start, Baudrillard seems to think. The pull of the American desert, the institutional emptiness, combined with the historical trauma through which they lived, was ultimately too strong for them to resist.

“This too is entirely Californian, for in reality it is not always sunny in California,” Baudrillard says of the illusion of American happiness in the aftermath of Vietnam: “This is what the Reagan mirage is like.” Note the use of “mirage” here, again echoing the empty, cinematic American desert. It is no coincidence that America’s first movie star President ushered in the beginning of an age of emptiness, of the eschatological finality of that posthuman wasteland that we find ourselves careening towards today. Baudrillard’s work is outdated in many ways, naive in others, full of impressionistic associations and intuitive leaps in many places. But his understanding of American naiveté and the nation’s stunning ascent to power in the Cold War period is crucial not just for understanding the “victory” of America in the Cold War, but the infinite hall of mirrors, the plague of images, the desert of desolation that we find ourselves lost in today.