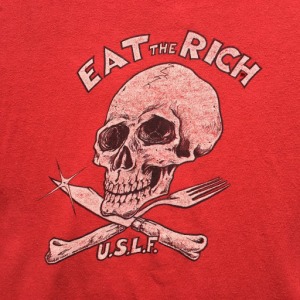 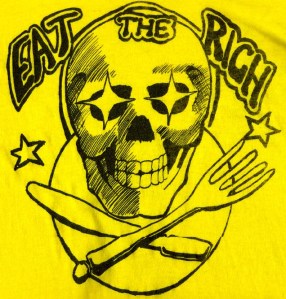 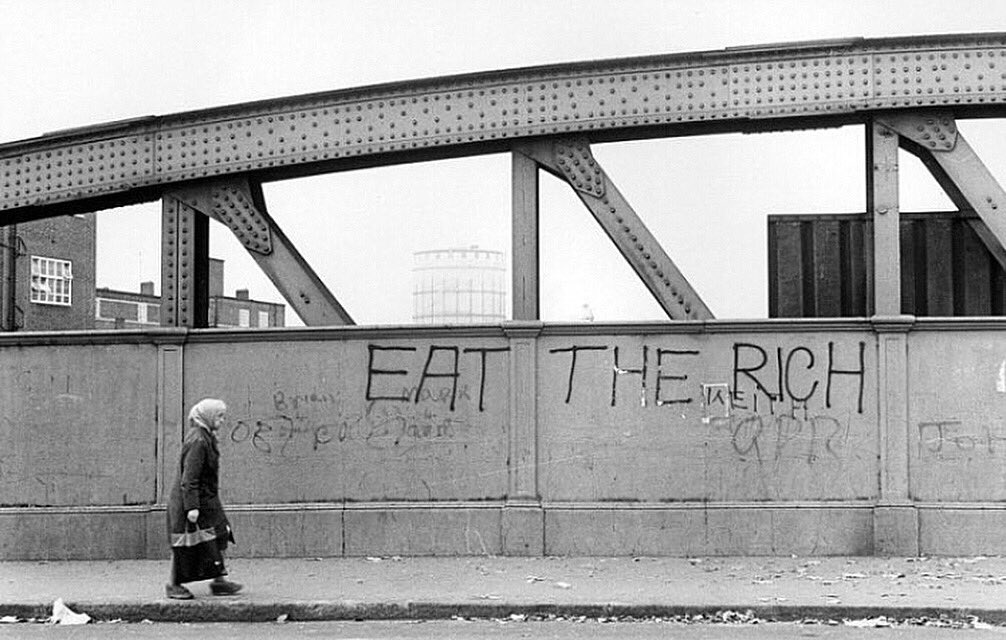 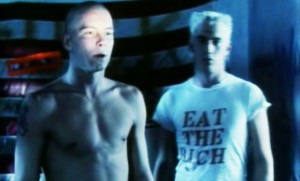 As Talia Levin noted last year in an Esquire article, “eat the rich” has become a popular expression among a new generation of leftists who have inherited, among many other obscenities, the most extreme income inequality of the last 50 years. The phrase is attributed to Enlightenment philosopher Jean-Jacques Rousseau in Adolphe Thiers’ 10-volume History of the French Revolution (1823-1827, English ed. 1838): “When the people shall have nothing more to eat, they will eat the rich.” It is very likely a misattribution, as no version of the line appears anywhere in Rousseau’s written works. Thiers, who Marx called a “monstrous gnome” for sucking up to the bourgeoisie, claims it comes from a speech Rousseau made to the post-1789 revolutionary government—at which point Rousseau (Jean-Jacques, anyway) had been dead for more than 10 years. The truth is that it is probably a creative inversion of something else Rousseau said in his posthumously published and heavily embellished Confessions (1782): “At length I recollected the thoughtless saying of a great princess, who, on being informed that the country people had no bread, replied, ‘Then let them eat pastry!'” This became, of course, “Let them eat cake,” and was itself (purposely) misattributed to Marie Antoinette by French revolutionaries. Whatever the case, the “eat the rich” quote appears extensively in subsequent 19th century political and historical texts.

How it came to the American counterculture in the late ’60s or early ’70s is something of a mystery, but the answer may be a new edition of Thiers’ book that was published in 1971 by Books for Libraries Press, a popular (and populist) New York publisher reprinting significant historical and fictional works. I can’t find any evidence of the slogan being used in the Paris uprising of 1968, but in the summer of 1975 a group of young anarchists, inspired by Jean Baudrillard and the Situationists, staged a coup at the Detroit-based underground newspaper Fifth Estate, “[abolishing] all paid positions and [refusing] to take any paid advertisements.” They called themselves the Eat the Rich Gang. Forming the year before, they had already produced and distributed a cookbook/pamphlet—following the lead of 1971’s infamous The Anarchist Cookbook—called To Serve the Rich, which included recipes for Hearst Patty, Rocky Mountain Oysters Rockefeller, Justice Burger, Split Priest Soup, Bourgeois Bouillabaisse, Lenin Harangue Pie, and Pope-pourri. 1975’s The Eat the Rich Cookbook, published by The Workers Revenge Party, reprinted large sections of To Serve the Rich and sported a cover illustration of a skull and crossbones, the latter fashioned out of a knife and fork.

It was this cover (which may have been taken from To Serve the Rich) that directly led to the slogan’s entry into wider consciousness by means of, no surprise, the emergent East Coast punk scene. In 1978, a series of photos taken by David Godlis show Patti Smith at a New York record signing (for Easter) wearing a shirt that says EAT THE RICH (in one shot, she is very defiantly set against a background of Abba posters and standees). The illustration is different from the Eat the Rich Cookbook cover but exactly replicates the skull and knife/fork crossbones. The letters U.S.L.F. (United States Liberation Front?) appear below the image. A slightly different illustration, using the Fraktur font to great effect and minus the U.S.L.F., was produced around the same time: Dee Dee Ramone wore one, as did outlaw country singer-songwriter Terry Allen. Smith and her cohorts were anarchists of a different stripe: they didn’t give a shit about French theory, or any theory; instead, they agitated with amplified distortion and impudence, all the while struggling to survive in a decidedly more desperate and destitute urban reality.

Things were arguably grimmer in the UK. Photographer Roger Perry’s 1976 The Writing on the Wall documented London’s suddenly rampant dissident graffiti, just as Jon Naar and Norman Mailer had explored New York’s subway street art in 1974’s The Faith of Graffiti (Mailer argued that graffiti was not vandalism, but art and activism). The respective elections of Prime Minister Margaret Thatcher (1979) and President Ronald Reagan (1980) made life for the masses even more deplorable, and by the mid-1980s “eat the rich” was forever codified in pop culture and the popular lexicon, emblazoned on pinbacks, walls and bridges, album covers, and several more t-shirts, some of them making cameos in the films of the day. It was the name of a 1987 British comedy and a 1987 Motörhead single. P.J. O’Rourke, in his book Eat the Rich: A Treatise on Economics, claims that he “first saw the phrase on T-shirts worn by the Shi’ite Amal militia in Lebanon in 1984 or 1985.”

The expression became flaccid and flatulent in the ’90s, was resurrected by student debtors and summarily re-executed by Wall Streeters and their federal accomplices during Occupy Wall Street, and today simply represents the fury and terror of millions of souls who are tied to the tracks, the increasingly persistent bleat of a runaway train in the near distance.