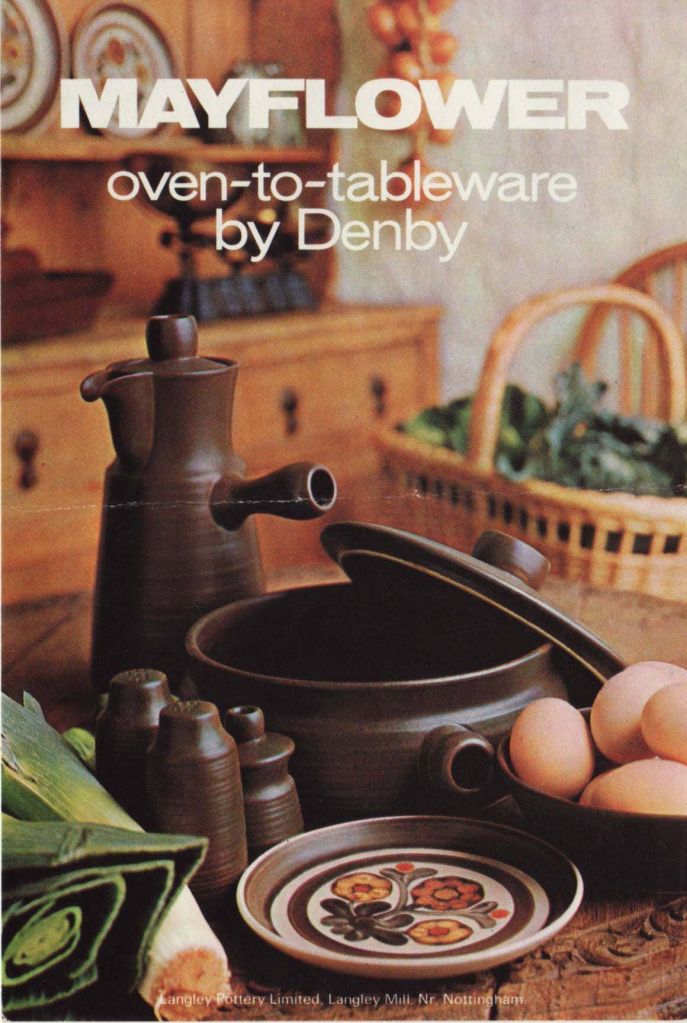 A strange talisman of British middle- and lower-middle-class aspirations of the 1960s and 1970s, Denbyware—the costly, absurdly heavy, hard-wearing (read, impossible to rid yourself of or destroy) brand of British tableware famed for its dun-colored hues, threatening shapes, and cranial-trauma patterns—was for a time the ne plus ultra of performative provincial socializing.

The British Midlands had long been a center for ceramics and pottery, and Denby had been producing stoneware—pottery fired at extremely high temperatures to make it impermeable to liquids—in the Derbyshire village from which it took its name since the early 19th century, over the decades cannily adapting its output to the changing needs and social aesthetics of the day. When the back-to-nature ideas of the counterculture began permeating the mainstream in the late ’60s, Denby’s products—their dolmenic mass hinting at ancestral connection, olde-worlde authenticity, and worthy refutation of shallow consumerism—were perfectly suited to the mood. The company’s memorable description of its “Ode” line (aptly pictured in the advert above with an anvil) as “immensely strong” and “devastating in design” provides a fairly accurate précis of Denbyware’s vocation: the implication was that these artifacts would not only outlive their owners, they might even outlive their owners’ civilizations, the only things left standing in the ashes of the increasingly likely nuclear radlands. Resembling ominous votive objects, Denbyware’s inscrutably esoteric forms seemed to emerge from ancient memory, as though the shade of Max Ernst might be using them to try to communicate something about the 20th century’s fucked-up relationship with its ancient past.

By the early ’70s, Denby’s main rivals for the White Collar Earth Children demographic were probably fellow Midlands pottery Midwinter, whose Stonehenge range flirted with Pagan themes, and Yorkshire company Hornsea Pottery. Denby’s principal perceived advantage over these competitors seemed to be that its products were heavier. A shitload heavier. In fact, Denby’s “stoneware” contrived somehow to be far, far heavier than actual stone. So heavy that it was actually an issue when moving house, as the stuff tended to hurtle through the bottoms of cardboard packing boxes like incoming meteorites breaking through cloud cover on their way to causing an extinction event. Unlike other tableware, if you dropped a Denby, the risk was not to the plate, it was to you and to your home and loved ones. The cups were so heavy that they would gradually droop over the aching fingers hooked through their handles, depositing liquid onto carpets and groins—though luckily their congenital crypt-like chill meant that within moments even the hottest of drinks was only tepid. It was almost as though the cups and plates and sugar bowls were not actually discrete objects but protrusions of some ur-tableware poking out from beneath the surface of the present day and moored to the eternal ley lines beneath.

Midwinter, one of Denby’s competitors

Together with other totems beloved of those migrating to the lower-middle classes—a pay-in-installments copy of the Encyclopaedia Britannica it was erroneously presumed would make me clever and some uncomfortable Ercol chairs—my family owned a set of Denby Sherwood when I was growing up that my parents had received as a wedding present back in the late ’60s. Given the Robin Hood-referencing name, it’s possible that evoking the sensation of slurping silt from concave rocks while sheltering under sodden foliage actually was Denby’s vision for the range. In any case, it was the result. Sherwood’s weird, death-colored finish conferred strange flavors upon any edible substance that came into contact with it: tea drunk from the millstone-heavy cups acquired a peculiar clayish taste, while Friday night fish’n’chips would go waxy and limp, as though being gradually irradiated. The Sisyphean force needed to lift the burial-urn mugs would often send their granite rims smashing into the teeth of the unwary like some ancient punishment, and each time the serrations of a knife or the tines of a fork accidentally caught on the surface of a Sherwood plate, a terrifying Stone Tape-esque screech was emitted that would freeze the whole family mid-fish finger.

Strangely, instead of encouraging the McKennas to rid ourselves of the cumbersome tableware, these weird properties only conferred upon The Denby an even more eerie grandeur. It was the same in every household I knew that had a set: The Denby were treated like fetishes—miniature henges, to be brought out only on occasions of highest ritual or to impress delegates from neighboring tribes. I called them totems earlier, and the received impression was very much that by laying hands on their chill surfaces, mind-melding with pre-lapsarian Iron Age ancestors could be achieved and balance restored to the earth.

It was also taken absolutely for granted that, as eldest son, I would in time be proud to have the Denby passed down to me and would fill all my available storage space with its imposing mass, as though it had been in the family for dozens of generations instead of bought on the HP in a department store in Chorley in 1967. Threats to sell the lot were greeted with uncomprehending horror, and in fact any nominal gain would in reality be offset by the difficulties involved in getting rid of the bastards: postage would incur moonshot-level costs while personal delivery would likely shatter the suspension of any car I’d ever be able to afford. How large numbers of Denby were ever moved about the country at all is a mystery up there with how the components of Stonehenge were rolled all the way from Wales to Salisbury—or at the very least testament to the sturdiness of the British freight rail system pre-Thatcher.

I’m exaggerating in my critique of Denbyware, of course, and especially of Sherwood. I grew up venerating it, and even today bits of our set continue to crop up unbidden in my life like ancestral relics. Designer Gill Pemberton produced some lovely work for the company, and Sherwood was one of her most memorable: strange grave goods that show the denizens of capitalist industrial society groping through their growing pay packets for something meaningful, something to connect them to who they are and to who they have been, even as they tuck into their Asda beefburgers. Something heavy.·