Compute!’s Guide to Adventure Games is one of a series of small, spiral-bound books intended for home computer users and programmers, produced by Compute! magazine (originally published by Small System Services from 1979-1983, then by ABC Publishing through 1994), at the time a major reviewer of hardware and software. The magazine covered all computer platforms in an era when cross-compatibility was unheard of, and the manufacturer and model of computer you owned dictated which peripherals and software you could use—unlike today, where you really only have two choices: Mac or PC.

Many Compute! books were platform-specific introductions to BASIC programming (Programming the PET/CBM, Compute!’s First Book of Atari Graphics, etc.), but Compute!’s Guide to Adventure Games centers on the then-popular genre of text-adventures. These were the electronic equivalent of Choose Your Own Adventure-style interactive fiction books in which the reader steered a branching narrative by choosing from a list of possible actions and skipping to the designated page to continue the story. Text-adventure games traded the decision menus for an open command prompt, where the user typed one-word commands or simple sentences (e.g. “OPEN DOOR WITH KEY”) to advance the story.

As the name suggests, text-adventures were generally graphics-free affairs, communicating with the user entirely with textual descriptions (although there were a few titles, referred to in the book as “graphic adventures,” that incorporated simple, static illustration screens). Originating on university computer networks in the mid-1970s, text-adventures proliferated commercially as home computing took off in the early 1980s. With their full-keyboard input and required time investment to complete, the games did not lend themselves to cartridge-based gaming systems or arcade machines. They were a niche pleasure reserved solely for computer hobbyists.

The book begins with a brief history of the text-adventure genre, followed by reviews of several games from three major publishers (Infocom, Scott Adams, and Sierra On-Line), before getting into the how-to of game design, from concept to practical implementation, using BASIC language code examples. Also included in the book is the complete code for an original adventure program, “Tower of Mystery,” that readers can transcribe into their own home computers, with code variations provided for several platforms of the day, including Apple, Atari, Commodore, IBM, Radio Shack, and even the Coleco Adam.

In a brief autobiographical introduction, the author describes his early exposure to the ARPAnet-hosted Adventure (or Colossal Cave Adventure, written by Will Crowther and Don Woods in 1976 and widely acknowledged to be the first text-adventure game), as well as his fledgling interactions with fellow gamers in what passed for social media in 1984: special interest groups (SIGs) on CompuServe (basically gamer-oriented discussion boards, conducted entirely in black-and-white text over very slow modem connections).

McGath describes early AI experiments that utilized text-parsing and keyword recognition to simulate conversations with the user (Eliza, by Joseph Weizenbaum, 1966), and comprehension of typed instructions (SHRDLU, Terry Winograd, 1968) as prelude to Adventure. Written in FORTRAN and shared between university computer labs via ARPAnet, Adventure puts the player on a hunt for lost treasure in a subterranean cave system set in a fantasy world inspired by tabletop role-playing games like Dungeons & Dragons. 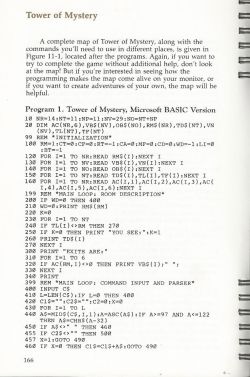 Presented as the second significant milestone in text-adventure gaming is 1977’s Zork, which boasted a more advanced command set than Adventure and introduced innovations like a randomized thief character, who would move items around the game map or steal them from the player’s inventory. The creators of Zork (Dave Lebling, Marc Blank, Tim Anderson, and Bruce Daniels) would go on to form Infocom, a commercial software publishing company that specialized in text-adventure games. McGath describes several Infocom titles, including Zork and its two sequels, as well as Deadline, Starcross, Suspended, Witness, Planetfall, Enchanter, Sorcerer, and Infidel, noting whatever innovative features each game introduced to the format (Deadline, for example, utilizes an in-game clock to advance plot points; Enchanter requires the player to provision their character with food and water, etc.)

Finally, “graphic adventure” games from publisher Sierra On-Line are reviewed. These games augmented the standard text-adventure format with static digital illustrations depicting a location or character. Titles covered are Mystery House, The Wizard and the Princess, Cranston Manor, Ulysses and the Golden Fleece, the ambitious Time Zone, which was a large enough program to take up six floppy disc sides (the user had to swap discs in and out during play), and an adaptation of the 1982 Jim Henson film The Dark Crystal.

A small sampling of titles from other publishers also get write-ups (Empire of the Overmind by Avalon Hill; The Stone of Sisyphus by Adventure International, et al), as well as a few action games that aren’t text-adventures, but share some similarity in theme and complexity (Temple of Apshai and Castle Wolfenstein, to name two) before McGath turns to the process of writing and programming your own text-adventure, beginning with The Parser.

The Parser refers to a coded routine that translates typed English commands (“GO WEST”; “TAKE BOX”) into a simplified set of “token objects” that are recognized by the program. McGath spends several pages exploring this concept before finally presenting some code samples (written in “pseudocode,” generalized terms that communicate the structure and logic, which the programmer must translate to the system-specific version of BASIC required by their platform).

Object Descriptors are covered next—the tables of data (stored in arrays) that record the location, description, and status of all objects in the game. Some of the complications of dealing with objects are addressed (e.g. in a room containing a body of water, the player might try to “TAKE WATER” in a receptacle of some kind, which would force the creation of a “water” object in the player’s inventory.) Automatic Routines (changes to the environment that occur independent of the player’s input), Action Routines (changes triggered by the player’s input), and Combat are also explored.

The final chapter, “The Edge of the Future,” is, retrospectively, the most interesting. In it, McGath speculates about the future of adventure gaming and the evolution of computer technology. Among the author’s predictions are increased collaboration between established genre authors and game developers, speech synthesis, voice recognition, and advances in graphics and sound, including the possible integration of content from video disks (laserdisc games were an emerging technology at the time). However, the author doesn’t see graphic animation ever supplanting the written word. While McGath can hardly be blamed for not anticipating today’s exponentially magnified computing power, his comments do seem charmingly quaint today:

Will visual effects dominate the game? It’s unlikely. Recording every possible scene and action, either with actors or in animated form, would take far too much memory capacity. The computer might be able to generate scenes on the fly from stock picture elements, but it would take some really good processing to avoid the stiff-bodied quality of Saturday morning cartoons.

It seems the author also failed to anticipate the demise of Saturday morning cartoons. 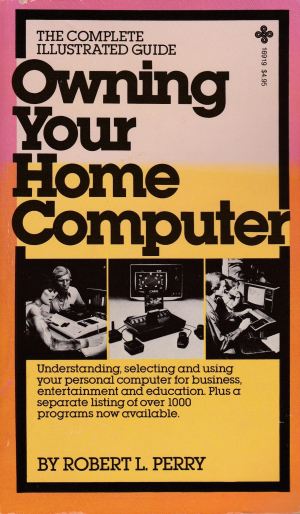 The home computer revolution was in full swing by the early 1980s. Today, no one would think of making an important purchase without researching and reading product reviews on the internet, but tech-thirsty buyers of the past didn’t have a web to surf. Instead, they talked to salespeople at the local computer store or Radio Shack, or they turned to one of many books like this one, quickly written, published, and stocked by Waldenbooks at the local mall. In most cases, these “all you need to know” books served as ammunition for kids trying to convince their parents that a computer was needed at home—and, for me, it worked.

Owning Your Home Computer: The Complete Illustrated Guide (also published in a large format in 1980 by Everest House) is typical of this now archaic genre, filled with stock photos from every major computer company of the period, as well as technical images that serve only to dazzle the prospective consumer, unless he or she was familiar with chip pinout diagrams. The table of contents, with soon-to-be-cliche chapter titles like “The World at Your Fingertips” and “What Do You Do with a Mind Machine?”, sets the stage for an interesting read. The first few chapters attempt to inspire a pre-internet world with all of the promise of networked computing, discussing the mind-boggling capabilities of services like The SOURCE and CompuServe. Comparing the descriptions of these services to today’s Wikipedia is truly incredible, although it makes a slow start for the book.

Author Perry continues with a wonderful overview of nearly every home computer on the market at the time. Not surprisingly, some of the information was obsolete even before publication, requiring an editor’s footnote—“This company is now out of business”—for the Interact Model One entry, for example. All of the classics are here, including the Apple II, Atari 800, TI-99 4A, TRS-80, and Commodore PET. Even the Mattel Intellivision is discussed.

The rest of the book is meant to inspire readers by overwhelming them with all the ways a home computer can improve their lives, including an overview of BASIC programming complete with errors (or perhaps these are debugging challenges). There’s a handy list of “Ninety-nine Common Things to Do with a Home Computer,” many of which were certainly not common in the early 1980s, such as “Regulate All Home Appliances,” “Analyze Voice Prints,” or “Run Household Robots”! Interestingly, quite a few things listed turn up at the forefront of home technology today, such as the emphasis on home automation. Finally, there’s a wonderfully out-of-date list of “1,050 Home Computer Programs,” filled with game titles, math tutors, and more real estate training programs than I ever knew existed.

Books like Owning Your Home Computer are quite enjoyable from a history of science and tech perspective, and it’s helpful to understand how far technology has advanced in such a short time. It’s also interesting to note where we’ve fallen short of what we dreamed was possible. Although this book was undoubtedly meant to cash in on the home computer boom, at times the author is surprisingly honest, as in my favorite quote: “A computer is supposed to be a magical machine that will solve all your problems at the touch of a button after it scares you to death. Well, it ain’t.”