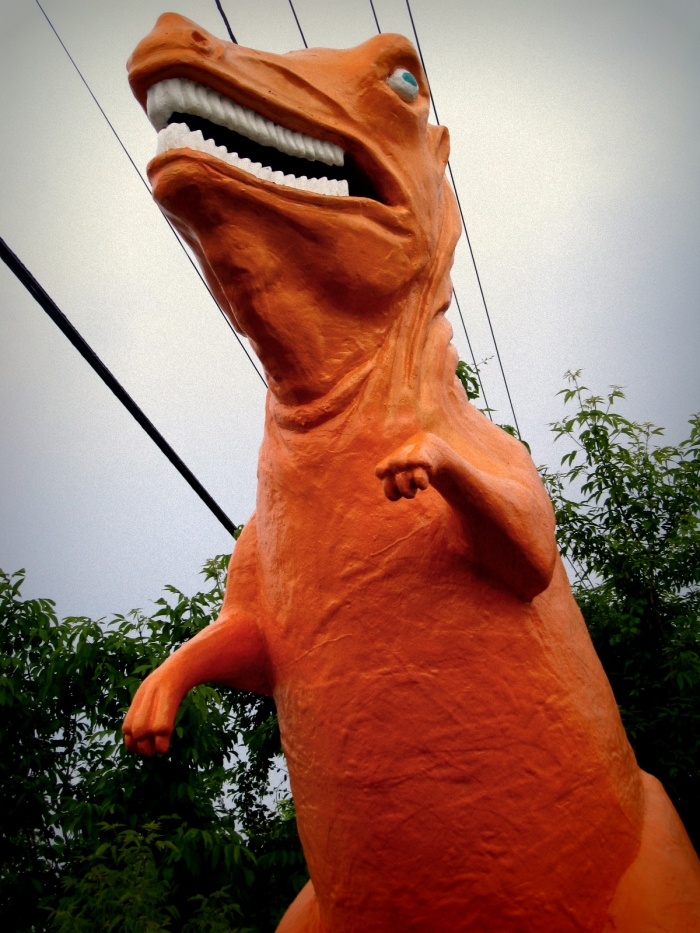 GRASSO: On August 28, 2017, The Ship restaurant in Lynnfield, Massachusetts was torn down. By itself, not much of an event, but taken in combination with the last decade and a half of kitschy, midcentury landmarks being closed, displaced, and demolished on the North Shore of Boston’s famous Route 1, this is the erasure of a very special place and time that hits awfully close to home for me. Growing up, Route 1 between Revere and Danvers, Massachusetts was a wonderland of midcentury signage and architecture, running the gamut from the 50-foot-tall cactus at the Hilltop Steak House to the iconic Orange Dinosaur at the Route 1 Mini Golf & Batting Cages to countless motels sporting signage from the classic ’50s/’60s era of motel styling. Now, all these institutions are gone, knocked down or taken over in the name of strip malls, shopping plazas, and luxury condos. While all this history is very personal to me, Jenny, these buildings are something of a foreign phenomenon for you, correct?

ANCKORN: The eye of the alien interloper in any culture is drawn to similarly alien things: things that people who have grown up alongside them may no longer see as unusual. “Sure, the twenty-foot tall bright orange dinosaur has always glowered menacingly over Route 1, like some pagan idol weighing the souls of motorists on their way to grab a bag of piping hot calories at McDonald’s. What’s so odd about that?”

He was just odd enough to get a passing callout in Stephen King’s Cell (2006). He was beloved enough that people mourned as the golf course he ruled over was pulled down and his grimace looked increasingly frightened rather than frightening—but no city council stepped in to save him. Where I’m from (the UK), destroying historical properties is taken incredibly seriously, but the golf course was plowed flat with barely a whisper. Perhaps it’s hard to imagine an object that fit into its environment with such authority being under threat until it’s actually gone. And the dinosaur is one of the lucky ones. He’ll stand alone, Ozymandias-style, in front of the aggressively bland shopping/apartment complex that is going up where the miniature golf course once stood. Nothing alien about that: the world doesn’t really want for square boxes containing other square boxes.

It was the orange dinosaur who was my first capital-A Americana Route 1 crush; perhaps a dinosaur is appropriate symbolically for the other strange and unusual monuments of a dying culture?

GRASSO: To loop back onto the Route 1 Mini Golf course, it opened in 1958 at the height of pre-fab mini golf mania. The popular obstacles that we all know and love from this period—windmills, water wheels, lighthouses—all trace their roots back to a pair of brothers from upstate New York: Bob and Joe Taylor. In the years after World War II, they founded a company to equip the kinds of courses that postwar nuclear families in America could visit either close to home or while on vacation. Route 1’s position on the North Shore of Boston made it, even before the creation of the Eisenhower Interstate Highway System, the fastest automobile thoroughfare to the vacationlands of New Hampshire and Maine (a legend that highway signage elsewhere in Massachusetts preserves to this day). What better way to spend a weekend away than starting off or finishing up with a round of mini-golf! In the ’70s and ’80s, the course added batting cages and eventually a small arcade to keep attractions up-to-date for the younger generation, but the golf course was always my favorite.

And where might you go to dinner after a hard day’s putting? Well, perhaps the Hilltop Steak House. Founded in 1961 at the height of yet another postwar middle-American trend—the classic American steak house, a postwar reaction to the enforced deprivation of wartime rationing—Hilltop provided affordable steak dinners on a massive scale. Filled with Western-themed banquet rooms named after the dusty frontier towns seen and heard on Baby Boomer-era Western TV series and movies—Carson City, Dodge City, Sioux City—the paging system at Hilltop was a literal cattle call; you’d be announced by number and dining room over the loud, staticky PA.

ANCKORN: One of the things that cheered me up immensely my first Christmas away from my family in the UK was seeing the Hilltop’s famous cows decked out in their Santa hats. You point out that the scale was massive, and yet when it’s one guy’s vision—in this case Frank Giuffrida’s—it retains the human touch that corporations these days are desperate to associate themselves with or cling on to. Kitsch is human. Like its big sister camp, it ironically can’t be artificially inseminated into anyone’s marketing scheme. I don’t want to get all “in a world” here, and yet, in a world where most chain store seasonal decor comes branded in corporate colors and with a strict guide specifying exactly how each individual bauble is to be displayed, there’s something very human about a herd of fiberglass cows in awkwardly drooping Santa hats.

It’s where the inhumanity creeps in that places like this fail. After Frank passes on to the great faux rodeo (fauxdeo?) in the sky, less money gets spent on food, quality goes down, the love is gone, profit is all, and people can sense that. If you subtract the human touch, what’s to prevent the next generation of suburbanites opting for the familiar safety of a Burger King? It’s a corny sentiment, but a restaurant topped by a giant neon cactus being, in its day, the busiest in the US proves that corny sentiment is something people want. Or used to want.

Perhaps we blame marketing. The personal touch in 2017 is an executive chef who “creates plates” for hipsters in 8-seater restaurants downtown. Blue-collar suburbanites are expected to be grateful for the highway chains that encircle their bedroom communities like a wall, not pine for some butcher with a penchant for plastic bovines.

Or do we point at dropping pride and quality in favor of wringing every scrap of profit from a business, or do you shrug your shoulders and say, “Maybe they weren’t all that great to begin with?”

I mean it’s not like The Ship had its own branded salad dressing. Did you ever eat there?

GRASSO: No, I didn’t. The Ship, sadly, didn’t have as good or reliable a reputation for quality eats as Hilltop did. But The Ship is only the tip of the proverbial iceberg when it comes to “restaurants that look like stuff” on Route 1. (I have to mention briefly the longstanding 20th century trend of “landmarks/buildings that look like stuff,” especially popular as roadside attractions in the US and, surprisingly, Australia! One could argue that this impulse of purely decorative and aesthetically whimsical architecture goes all the way back to the “follies” of 18th-century Britain. But I digress.)

So let’s see, there’s the Prince Pizzeria with its “Leaning Tower of Pizza” (1961), the Route 1 Chinese temple-inspired boondoggle Weylu’s Restaurant (opened in 1989, closed a decade later). But probably biggest, most impressive, and most successful of them all is the midcentury Tiki shrine, the Kowloon Restaurant (1958). The Kowloon is a classic example of yet another postwar American trend, the Tiki bar/Chinese restaurant. GIs, sailors, and Marines returning from the Pacific theater in World War II powered this dining and drinking trend in the States. The Kowloon features much of its original decor: an entire wall covered in Polynesian island seascape (complete with full-motion erupting volcanoes; this was my favorite place to sit as a kid). It even still has its original outdoor signage and clock, and still does pretty good business. For now.

Speaking of midcentury signage, one desperately missed (and slightly sleazy) feature of Route 1 is all the motels. Most of these opened immediately before or after World War II—again, as a rest stop for travelers headed to and from New Hampshire and Maine. As the years went on, they became less family destinations and slightly more sordid (they were nicknamed “no-tell motels,” as I learned growing up in the ’80s) but many of them had amazing Googie-inspired signage which was always a delight to drive by.

But you’re right; I think there is a series of class and economic issues underlying the way Route 1 has changed over the years. As you say, a thoroughfare like Route 1 gets taken over by big box stores, fast food chains, and other deep-pocketed corporate enterprises that can price out the little guys. And all of a sudden, a time capsule that implicitly extols a certain kind of postwar American economic and social power looks just like everywhere else in America: a strip full of Walmarts, McDonald’s, and Chipotles.

ANCKORN: The more I think on this the more I wonder if it isn’t a marketing thing. You mention Australia as a haven of “stuff that looks like stuff.” Well, there you have another country with a lot of long empty highways, and businesses trying to eke a living along those highways need to draw people in. Perhaps in the early 20th century that meant something unexpected, but when you have a few huge corporations with their multitude of finger-tentacles in all of the pies, it makes sense to market the opposite way: you sell the consumer on the bland and familiar. The art of advertising comes not from wowing people, but soothing them. Bland familiarity makes for a compliant consumer base. They don’t want to eat things on fire in a boat inside a Tiki lodge (which is the defining memory of my Kowloon’s experience); they just want to sit in the same booth eating the same food they do back home. Maybe the seeds of roadside kitsch’s destruction were already taking root in its midcentury heyday? The idea of the automat strongly appealed to forward-thinkers like Warhol, who was an expert in mass production and the comforts of boredom.

We’re supposed to trust in the collective cultural iconography (some of which is still to be seen along Route 1 in its original format) to guide us to safe havens, and distrust the unfamiliar. Sure, it’s shaped like a giant ship, but I heard of a friend of a guy’s sister who got scurvy there. At least at Starbucks we know the coffee is reliably tepid and the muffins, although stale, won’t kill us. And we can look at that weird orange dinosaur in front of the shiny new shopping center from our window seats.

Kind of ugly, isn’t it? Someone should tear that thing down.