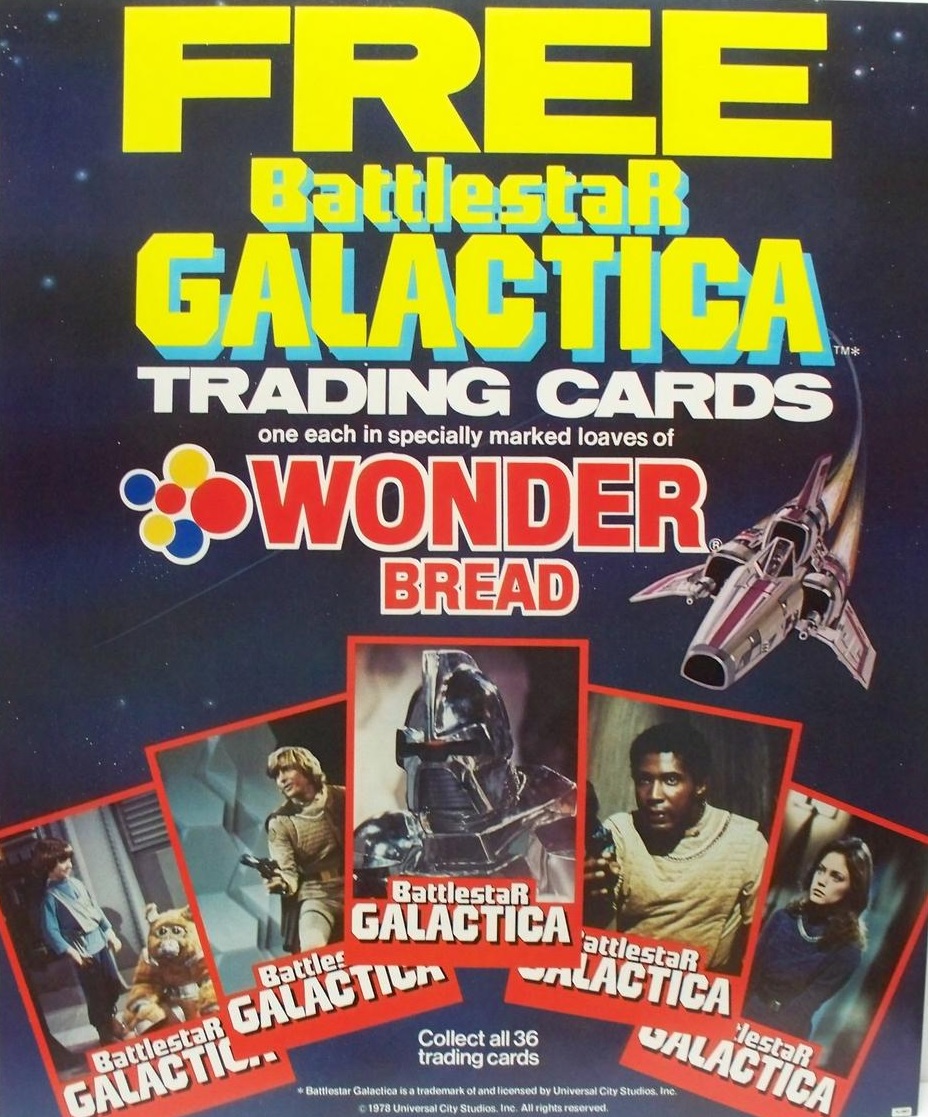 It sounds ludicrous now, but the neighborhood grocery store was once an exciting destination for kids. Along with a serviceable “toy section,” where you might find an overpriced Micronaut or Metal-Man, dinosaur and army man playsets, Presto Magix “dry transfers” (the paper had a distinctive and delicious smell), die-cast mean machines like Dyna-Flytes, and a host of other tangible pleasures, there were comic book racks, a selection of sci-fi, horror, fantasy, and humor magazines, candy and toy vending machines, video games (sometimes), and, after Star Wars, a host of merchandising campaigns during which the most prosaic of commercial products included mementos of the most fantastic cinematic and television experiences ever concocted for young people.

“Specially marked loaves” of Wonder Bread came with exclusive football cards, superhero cards, Topps Wacky Packages, Hanna-Barbera cartoon cards, and more throughout the ’70s, but, in the second half of 1977, mere terrestrial concerns took a back seat to outer space opera, and the company produced sets of cards for both Star Wars and Close Encounters of the Third Kind. I do remember the Star Wars cards (I was two weeks shy of six years old when the movie came out), but it may have been through trading with my friends—we all had shoe boxes full of the things, and there were five different Star Wars series sold by Topps in ’77 alone. When Battlestar Galactica premiered in 1978, it was a big deal. Here was something much like Star Wars—of which we pre-VCR kids had only our memories and toy recreations to sustain us—and it aired every week. The Cylons and ship designs would have been enough, but really the whole show compelled me: there was an underlying darkness, at least in the beginning, as the last human survivors of the evil-robot-dealt apocalypse struggled to survive on a handful of supply-starved spaceships—in search of ancient astronauts!

Anyway, after I discovered that these gorgeous red-bordered cards came “free” with bread—which I ate three times a day to ensure a continuous demand—my mom couldn’t shake me. Each time we walked into our Stater Bros., the bread aisle was our first stop (I can still see it), and I would go through loaf upon loaf, peering through the transparent wrappers to find the cards I needed. We didn’t even eat Wonder Bread at the time (Weber’s was our brand), but my mother indulged me (she also took me to the library every week, and later the comic book store and the “regular” book store). That Christmas, I got some of Mattel’s Battlestar Galactica toys, including the original Colonial Viper with the firing missile that, a few days later, choked and killed a four-year-old boy in Georgia.

These days, as I walk down a much more elaborate aisle (Wonder still exists, but Weber’s doesn’t) to buy whole wheat loaves for my PB&J-consuming girls, the smell of sliced bread immediately recalls the memory of those cards, the memory of that world in which everything I loved pointed to endangered rebels among the stars, and a picture on a piece of cardboard could take you there, and the difference between what you lived and what you dreamed was exactly nothing.