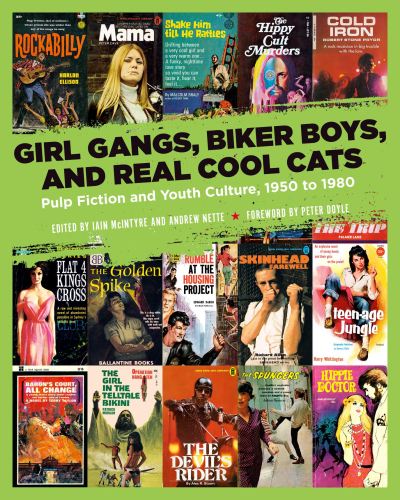 Serious study of pulp novels—inexpensive paperbacks churned out by the millions from the 1950s through the 1970s—is a relatively recent development. The novel itself, even the enduring classics studied in universities today, was derided as idle and debauched until the beginning of the 20th century. So why should we sanction exploitation fare such as Jailbait Jungle, Cute and Deadly Surf Twins, and Soccer Thug when there’s another 500-pager on Shakespeare’s universal genius—or another postmodern screed on Shakespeare’s moral and ideological shortcomings—to be written? First, because untold numbers of people from all walks of life, openly or covertly, read and enjoyed these lurid tales; and second, because many of the writers who wrote them had something worth saying, and the “respectable” literary presses were not about to give hippies, grifters, drifters, homosexuals, and working-class gutter-snarks a voice. It was hard enough to defend serious literature, after all.

Certainly academic study of the paperback boom of the postwar era is nothing new (see Kenneth C. Davis’s Two-Bit Culture: The Paperbacking of America for a good start), and you’ll find monographs by scholars on Fahrenheit 451 and The Good Earth, on Harlan Ellison (who got his start, I discovered, writing novels about teenage delinquents) and Agatha Christie, on almost any author who skirted the fringes of popular or critical taste. As far as I know, though, Girl Gangs, Biker Boys, and Real Cool Cats is the first attempt to investigate comprehensively—and without snark or caveats—what has always been dismissed as the literary ghetto. The essay anthology focuses on youth culture and subculture as represented in the pulps, from the juvenile delinquent (JD) novels of the ’50s through the rise of young adult fiction in the 1970s, with romps through the perilous turfs of Beats, bikers, rock stars, skinheads, satanic cultists, druggies, longhair tough guys, and sexual deviants of every persuasion. There are several long-form essays digging into genres, series, and authors’ oeuvres and backgrounds, as well as one-off reviews and, invaluably, interviews with the writers themselves.

I was afraid the oversized book would be a cover art gallery and not much more—a fashionable format of late—but it absolutely is not. While there are some 400 lush, full-color photos, the text is the reason I’ll be keeping the book handy. In fact, I almost wish the book had fewer pictures. That’s how interesting the story is. Consider the previously mentioned Harlan Ellison, who wrote 1949’s Duke, a trenchant and bestselling portrait of a 15-year-old African-American gang leader trying to make his way on the mean streets of Harlem. Here’s the titular main character telling it like it is:

And there’s Marijane Meaker, who “effectively launched the American Lesbian pulp novel” with Spring Fire (1952), using the pseudonym Vin Packer (“male names sold better in paperback”) and making $5000 per book (that’s over $50,000 in today’s dollars), along with an additional $5000 if the book was reprinted. In 1972, Meaker (who is gay) wrote both Take a Lesbian to Lunch and Dinky Hocker Shoots Smack, the latter becoming an early classic of young adult fiction. (Nobody shoots smack in the novel. Deceptive titles are a pulp fiction staple; if the content itself was found “questionable,” the post office found would refuse to ship the order to retailers.)

The money-grubbing publishers themselves, and the mercenary (sometimes brilliantly so) editors therein, deserve their own study. We find out about Gold Medal and Fawcett, Pinnacle and New English Library, Olympia Press and Mayflower. But what was it like inside the offices—sometimes just a room with a phone—on a day-to-day basis? And who answered the phone? Erotica (or “fuckbook”) author Jane Gallion describes Los Angeles’s London Press in the 1960s as

a vast, ramifying empire of smut. The New Jerusalem of pornography. Its business offices… warehouses and helipads clustered on the carcass of Fulton Avenue like a flock of turkey buzzards, flapping, squawking, proliferating. The parking lots were ponds, in which limos and ruinously expensive sports cars multiplied like bacteria… Jaded photographers criss-crossed with camera straps hustled groups of tired-looking girls in and out of discreet side doors.

Nette’s and McIntyre’s pieces are particularly strong, as are Bill Osgerby’s essays on “The Pulp Delinquents” and “The Best of British Bovver,” the latter detailing the racist, misogynistic, nihilistic, and graphically violent skinhead novels of Richard Allen. While many of the pulps threw sparks of progressivism and humanity, others stoked the primitive terrors of immigrants, teenagers on the loose, and women who disobeyed. Most had no purpose but to titillate. And yet, even from the slums, poetry springs, born of endless deadlines and exhaustion and hunger.

Girl Gangs, Biker Boys, and Real Cool Cats is an important book, a study of the postwar anxieties and unspoken desires that throbbed and squirmed beneath a taut veil of suburban fantasy and mid-century modern decor. My only real gripe is that there is no bibliography, and that makes the work hard to build on. The truth is that we don’t need any more books about Shakespeare. We do need more books about the freaks and fairies who come to life inside these countless slender volumes sold for cheap at newspaper stands and drug stores and bus stations. As university educations become less and less affordable, and academia becomes more and more inbred, independent publishing houses like Oakland’s PM Press—presenter of the volume at hand—become increasingly indispensable. Who is going to recover the new scholarship and chronicle the new canon in our soon-to-be dystopia, if not the ones who disobey?