Marcuse, 1970. From the first series, where all 10 of Bevan’s covers formed a larger piece of Op Art.

Freud, 1971. Again, the second series formed a larger work of art, but this series was missing its tenth volume.

Proust, 1974. This series, the final from Bevan, used the dynamism of his kinetic art as a touchstone.

Sartre, 1975. James Lowe took over the series in 1975 with these simpler geometric patterns on white designs. 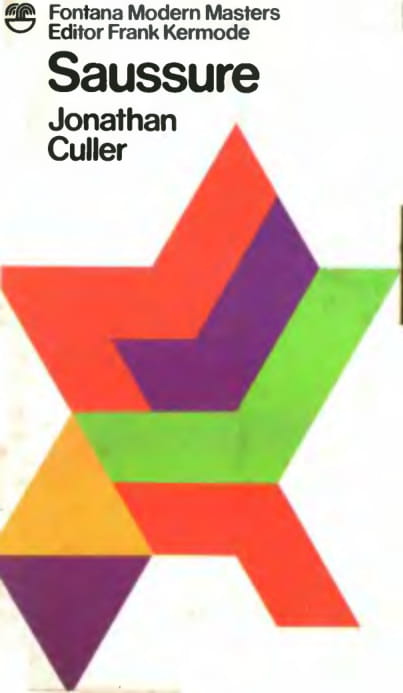 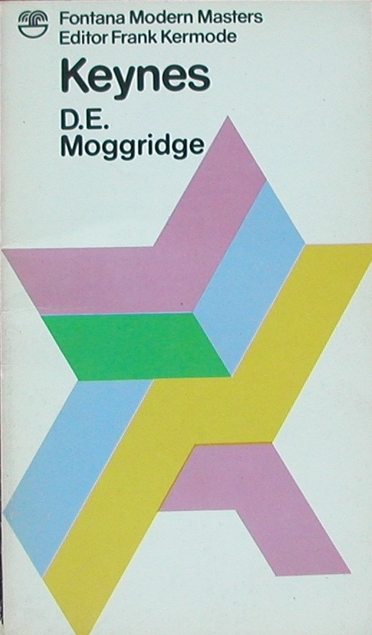 The Fontana Modern Masters series was conceived in the late 1960s at Scottish publishers William Collins & Company’s Fontana imprint. Fontana Books had spent its first decade publishing inexpensive paperback pulp and detective fiction, priced between two and three shillings. But, in May 1968, revolutionary theory and Situationist praxis caught fire in the streets of Paris, as students plastered walls and barricades with catchy slogans meant to détourne the mainstream, postwar advertising culture around which they’d grown up. Fontana saw an opportunity to capitalize on this hunger on campuses for 20th century literary, cultural, and philosophical theorists. Essentially, the proposed Modern Masters series would be pulp philosophy.

Literary critic Frank Kermode, then at University College London, had suggested the series at a lunch with Fontana’s Mark Collins and Michael Turnbull. In his 1995 memoir Not Entitled, Kermode notes he was lukewarm on the idea—a “huge history of literature”—that Collins and Turnbull had proposed: “I told them it was a bad idea, or at least a bad moment for such a project, since at the time nobody had any clear notion how to go about writing such a history, and nobody could be sure that even if it got done, anyone would be much interested in it.” But in his visits to America in late 1969, Kermode noticed a change in the air, as students moved from visceral protest to a desire to find meaning among the chaos by reading and internalizing theory. Kermode also noted that what the students knew about these theorists was “largely hearsay.” So Kermode suggested what eventually became the Modern Masters series: each volume would focus on the theory of one thinker and provide “authoritative but intelligible introductions.” In his introduction to the series, Kermode notes, “By Modern Masters we mean the men who have changed and are changing the life and thought of our age. Everybody wants to know who they are and what they say, but hitherto it has often been very difficult to find out. This series makes it easy.”

The series is especially remembered for its eye-catching cover design, drawing deeply from the wellspring of mid-’60s Op Art. Fontana art director John Constable enlisted young British artist Oliver Bevan to create an abstract, geometric set of covers reminiscent of both Bevan’s larger installation work (seen in a lengthy engagement at London’s Grabowski Gallery) and the playful, interactive pieces in his later 1969 show, Connections, a fully-interactive piece of art allowing gallery visitors to rearrange magnetic tiles featuring geometric figures. In a similar way, the first ten books of the Modern Masters series would, when laid next to each other, create a larger piece of art.

Kermode remarked that this marketing strategy was genius: “In Britain they sold for 30p or 40p, and young people bought them by the handful.” The series continued well into the 1970s, with Bevan providing new, evolving cover designs for two more sets of releases in 1971 and in 1973, which emulated work he was doing in kinetic art. In 1975, fellow geometric artist James Lowe took over the design of the series and produced three lines of covers through 1984. In 1985, Fontana made the decision to rerelease the series and publish new Modern Masters in a more staid, traditional style with images of the subjects on the covers. Design had moved on, and the very Seventies look of the Op Art Modern Masters titles had probably begun to appear old-fashioned and fusty.

The first set of ten Modern Masters included some of the thinkers that Kermode had heard students gushing over in ’68 and ’69: revolutionaries like Che Guevara (interestingly, a volume on Ho Chi Minh written by David Halberstam never materialized as part of the series; Halberstam later took it to a different publisher), left-wing thinkers like Herbert Marcuse, Frantz Fanon, and György Lukács, and interpreters of media culture like Marshall McLuhan. The urge to make these studies of quite often left-wing thinkers into collectible objects, redolent of commodity fetishism (inexpensive and within reach of college students as they may have been) is, of course, one of the lasting paradoxes around the Modern Masters series. That and the fact that the first women in the series did not appear until quite late in the form of a volume on Hannah Arendt in 1992; Kermode was not kidding around when he used the quite traditional form of addressing “the men who had changed the thought of our age.”

It is, of course, a little stunning to hear the language of the midcentury global ad game surround these thinkers; Kermode’s story of meeting Collins and Turnbull at the hyper-exclusive Garrick Club certainly gives one pause. One thinks back to the Situationists and their theory of recuperation, where ideas threatening to the status quo are made palatable and packageable for the bourgeois consumer. And yet the legacy of the Modern Masters is not so easy to pigeonhole. As objects and works of art themselves, they loom large in design history (one can easily see slim, design-conscious book lines like Bloomsbury’s 33⅓ music series or their recent academic “Object Lessons” series as spiritual descendants of the Modern Masters). The theories of the Modern Masters were in many cases inaccessible to the beginner. A slim, cheap volume that punches through the obscurantism surrounding much of left-wing theory and jargon can be a profoundly leveling and equalizing force, at least for university students; one wonders if a similar series designed and aimed for the working class could have found fertile ground at a major publisher. Were the Fontana Modern Masters volumes a powerful democratizing effort, or simplistic bowdlerizations in pretty packages? My thought is probably more the former than the latter, but ultimately the Modern Masters were meant to sell, and sell well.