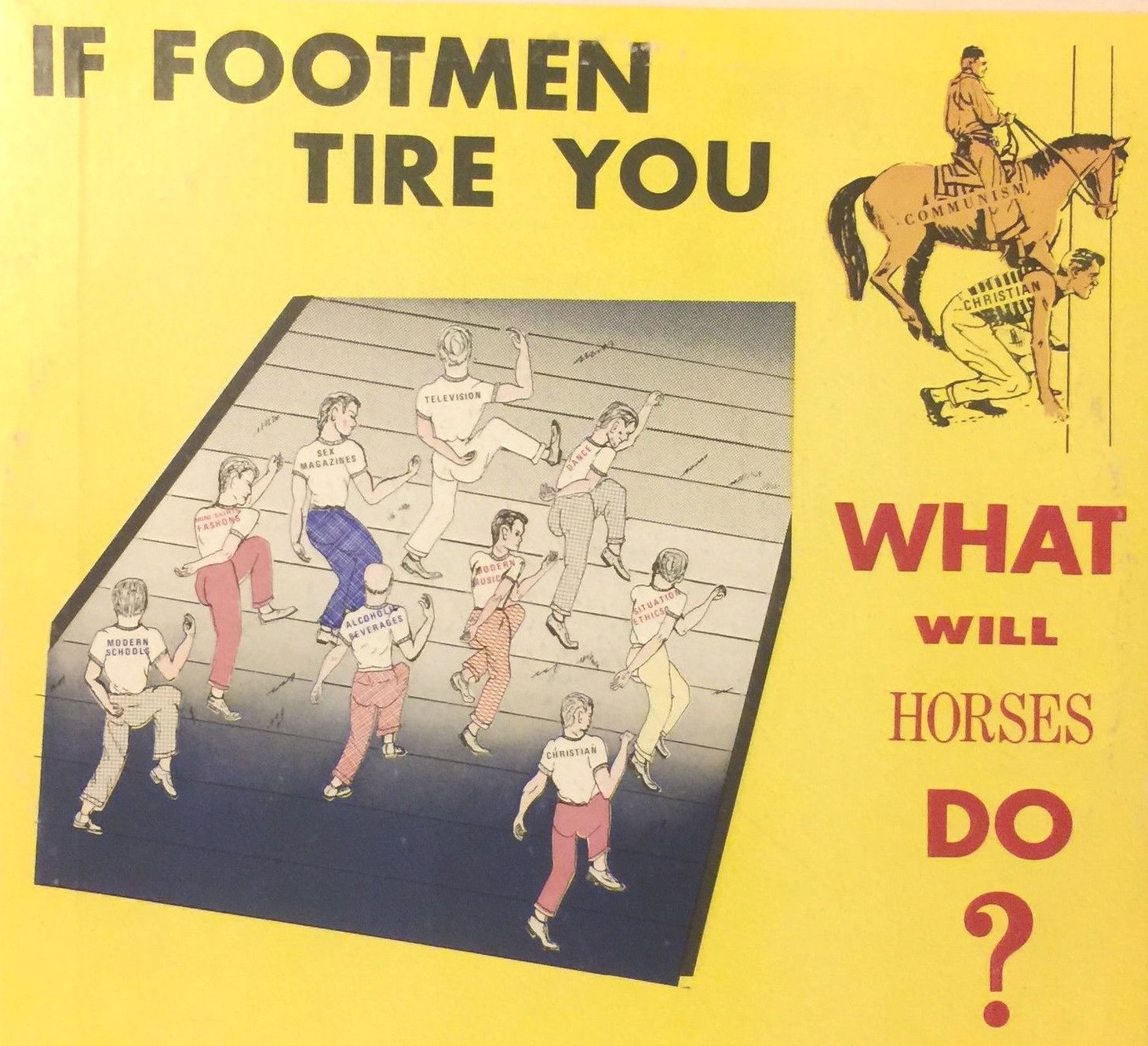 There is a point near the end of If Footmen Tire You, What Will Horses Do? when an actor dressed in the uniform of some unspecified communist country grabs a Christian child by the hair with his left hand and raises his machete-wielding right hand, poised to strike a blow for the godless infidels. And even though the viewer has already seen many bizarre things in this 1971 Christian propaganda effort, it is hard to believe that what is about to happen is about to happen. Surely the camera will cut away, because there are reasons both moral and cinematic why we should not see this. But then the machete swings, and the communist grips the decapitated dummy head of the child for a moment before flinging it dismissively into the grass. We watch the head roll to a stop and wonder: what kind of God would allow this movie to be made?

The journey to the rolling head begins with Ron Ormond, a man who dabbled in several of the more boisterous forms of 20th century American kitsch, such as stage magic, roller derby, and New Age mysticism. It is his films that we (sort of) know him for, though. Beginning around 1948, Ormond began directing a series of Westerns and B movies, the most famous of which is probably Mesa of Lost Women (1953), a film thrown together using another director’s discarded bits of footage along with a few new scenes and lots and lots of cost-saving narration. It’s a bad movie. I bet you weren’t expecting that. 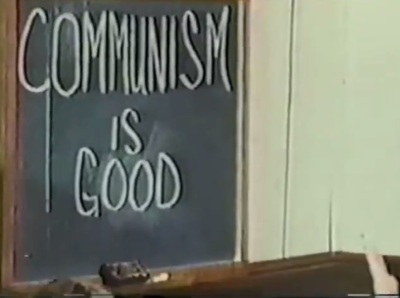 During this time, Ormond crossed streams with Ed Wood in a variety of ways. For example, both Ed and Ron utilized the unique talents of actors Lyle Talbot and Dolores Fuller. Also, the insistent flamenco score that Ormond used for Mesa of Lost Women was later employed by Ed Wood for his film Jail Bait (1954). Beyond that, they shared a certain ridiculous style born of starved budgets and mysterious confidence. While I can find no record of it, I like to imagine that they spent some time together drinking the cheapest booze available while admiring each other’s work.

Ron Ormond’s world of desert locations and barely-dressed women came to a sudden end in 1968, when he crashed his small private plane and survived. This catastrophe was Ormond’s conversion experience. He felt he had been spared by God, and that it was therefore the least he could do to put his exploitation talents in service to that God (although not before he made one final thrust at moral turpitude with a film called The Monster and the Stripper [1968]).

Enter Estus Pirkle, the pastor of Locust Grove Baptist Church in New Albany, Mississippi. According to a 2015 interview with Ann Pirkle, Estus’ widow, he began preaching when he was 18 and “loved preaching the word continually, like he did.” He was the pastor of Locust Grove for 36 years and did a great deal of revival preaching in traveling tent shows besides. On the genesis of Footmen, Ann had this to say:

He had preached his sermon If Footmen Tire You What Will Horses Do? at Camp Zion here in Myrtle (Mississippi), I guess it was around ‘68 or ‘70 or something like that. One of the men had heard it and asked if he would think of putting it on film. He said he knew a man who made Christian films. Estus told him, ‘Well, I’ll meet with him but I don’t know anything about making films.’

As we know, that man was Ron Ormond, and the sermon he agreed to bring to life—recorded on vinyl in 1968—was a litany of horrors meant to frighten believers and nonbelievers alike. The title of the sermon and film requires some exegesis. It comes from Jeremiah 12:5, which goes (in the King James Version) like this: “If thou hast run with the footmen, and they have wearied thee, then how canst thou contend with horses? And if in the land of peace, wherein thou trusted, they wearied thee, then how wilt thou do in the swelling of Jordan.” To paraphrase, the writer is saying that the complaining prophet might as well suck it up and trust in the Lord, because things are going to get much worse. 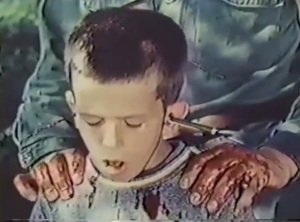 How much worse? A lot worse. If Job had seen this movie, he might have accused it of gilding the miserable lily. There’s a scene in which a commie drives small bamboo spears into a child’s ears so that the kid can “no longer hear the word of God.” That child then appears to puke. Whether the puking is authentic or not is unknown, but certainly the pressure of saving America from the dialectic would be enough to induce vomiting in anyone, especially a child. Other imaginative acts of torture are interspersed with massacres in which extras fall languidly after being machine-gunned by communists. There are many depictions of dead children in the film. Their deaths are robbed of some gravitas by the fact that they are splattered with unrealistic stage blood, as if a sanguine Jackson Pollock had been at them, but it’s still odd to see them all laying there, playing dead for Jesus.

Pirkle provides several moments of unintentional levity that rise above the rest, such as when he describes Saturday morning cartoons as “Programs motivated to lead your child into crime. Into sex. Into murder.” Drive-in theaters (ironically the former stomping ground of Ron Ormond) are a “spawning house for sex.” And woe be unto those who dare to dance, because dancing is “just as wrong as it’s always been. Dancing is . . . the front door of adultery.” He makes several confident claims regarding communism that are objectively false. He says, “Are you aware that 60 years ago there wasn’t a single communist in the world?” This would come as a tremendous shock to Karl Marx and innumerable others. With great foreboding, Pirkle contends that the communists plan on killing 67 million American Christians after they invade, an oddly specific number that arises from no known reality.

Pirkle and Ormond also purport to show us some of the insidious brainwashing techniques of the reds. There is a scene where Christian children are lured into the arms of Fidel Castro with promises of commie candy. (What would you do for a Klondike bar?) Then, there’s the depiction of a diabolical psychological assault in which the innocent populace is forced to listen on loudspeakers as someone chants “Communism is good. Christianity is stupid.” This section is so catchy that the experimental band Negativland felt the need to turn it into a song containing the sampled voice of Pirkle.

The film runs on parallel tracks. One track is the reenactment of the parade of future terrors that will be inflicted on Christians that Pirkle expounds upon in his sermon, and that I have been describing. The other centers on a lost soul named Judy, who exists in pre-communist-takeover 1971 America. Judy is dropped off at Pirkle’s church by an obvious scofflaw who refuses her invitation to accompany her by saying, “I’m a lover, not a Christian.” She then listens to Pirkle sermonize while being occasionally tormented by visions of her profligate life and the dead Christian mother who only ever wanted Judy to get saved (“Judy, I implore thee. Read the scriptures. You will be the death of me.”) Judy ultimately gives in to the seductive blandishments of Pirkle and tearfully accepts Jesus into her heart. This is a common but clever plot structure for such a film and an indication of Ormond’s years of experience behind the camera. (I felt like I had to say something nice.) It was also functionalist. Footmen was meant to be taken from church to church in order to save souls, so to have that redemption depicted through Judy was a way of showing the flock exactly what they were meant to do.

Footmen is an extraordinary stew of Cold War paranoia, fire and brimstone Christianity, and exploitation filmmaking. It is a perfect disaster that couldn’t have happened in any other place or time, and it’s not the only disaster that Ormond and Pirkle were responsible for. In 1974, they released The Burning Hell, which is what it says on the label, an extraordinary journey into Hell with some advice about how not to go there. And, as Dante did before them, they followed their trip to the underworld with The Believer’s Heaven in 1977. Both of these films are far too bizarre to be summarized in a few sentences, but suffice it to say that their Hell is more interesting than their Heaven, but you wouldn’t want to spend a lot of time in either place.

Daniel Cecil is a person who lives in Indianapolis, Indiana with his girlfriend, two cats, and a cardboard cutout of Agent Dale Cooper.