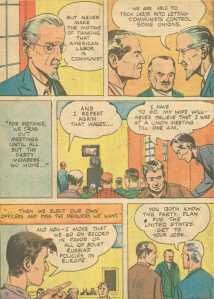 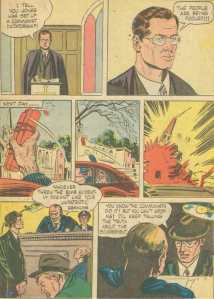 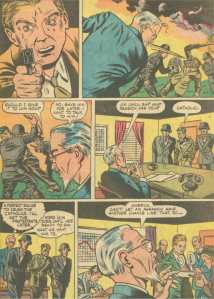 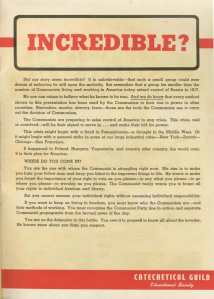 In a few short years following the end of World War II, a new showdown between the capitalist West and communist East gradually ossified. A cold war had begun. Certain leaders of the American armed forces in Europe in 1945 were disappointed that an anti-communist war in Europe did not immediately follow the fall of Hitler. The Truman administration’s foreign policy “Wise Men,” in the earliest years of the Cold War, predicted a global Soviet expansionist policy and recommended “containment.” In the second half of the 1940s, the newly-born American postwar intelligence apparatus immediately set to combating communist influence on the ground in Western nations as well as building defenses in central Europe against the encroaching communist sphere of influence, a Western counterpart to what Churchill had termed “an iron curtain.” A bunker mentality had settled over both the continent of Europe and the American homefront, with one goal: stop the spread of international communism.

America had exhibited a long history of red-baiting prior to the anti-fascist alliance of convenience in World War II, from helping the tsarist sympathizer “White Army” forces in the Russian Civil War to the mass deportations and persecutions of socialists on American shores during the 1919-1920 “Red Scare.”  A steady diet of anti-socialist propaganda, somewhat stifled by the success of modest central planning to combat the effects of the Great Depression, thrived in the interwar period. Particularly involved in this anti-communist political movement was the American Catholic Church. Of course, in the aftermath of the Bolshevik Revolution’s fervent and non-negotiable anti-clericalism, the Catholic Church, already not positively disposed to communism, became more militant. Catholic immigrant populations in the United States, including a rising Irish middle class in eastern cities like New York and Boston, met a newer wave of immigrants from Italy who were sometimes decidedly more radical in their political orientation. The powerful place of labor unions in Catholic immigrant communities was also troublesome to conservative Church authorities. In the end, the arch-conservatives in the American church largely won out in the years immediately before World War II. American Catholics in the 1930s could be found supporting the Nationalists in the Spanish Civil War and broadcasting nationwide a steady diet of specifically American fascism on the radio. (The Papacy’s relationship with both Hitler and Mussolini in the interwar period is, of course, still a matter for vigorous historical debate.) Mass media helped these efforts: Father Charles Coughlin, a national radio superstar in the years leading up to World War II, after a dalliance with New Deal-ism, began echoing Nazi beliefs that an “international Jewry” was behind the rise of communism worldwide. In the postwar years, another popular Catholic broadcaster, Fulton Sheen, peddled a milder, more moderate form of Catholic anti-communism on both radio and the new medium of television. Another new mass medium that Catholic anti-communists took advantage of in the years following World War II? The humble comic book.

This artifact from the beginning of the Cold War, Is This Tomorrow? America Under Communism, was published in 1947 by the Catechetical Guild of St. Paul, Minnesota. (A catechism is a religious educational primer and, among Catholics, the word “catechism” is often used as a metonym for Catholic religious education itself.) Founded by Father Louis Gales, who also created the long-running Catholic Digest, the Guild created educational materials for Catholic youth, often featuring exciting adventure stories, saints’ lives, and other “illustrated classics” type edutainment. The comic’s purpose is expressly to warn children of what a future under communism might look like in America—“TO MAKE YOU THINK!”, in the words of the brief text introduction—and that the instruments for such a takeover already exist in 1947: “[Fifth columnists] have wormed their way into key positions in government offices, trade unions, and other positions of trust.” Before the spectre of mutually-assured destruction, or even the fear of a limited exchange of nuclear bombs, 1940s red-baiters feared and imagined a homegrown October Revolution more readily than total obliteration at the hands of the Soviets.

The process of America’s fall into communism in Is This Tomorrow? focuses on these very positions of trust. A Dust Bowl-style agricultural failure (which the comic describes with the delightfully archaic term “drouth“) opens the door for the push to full-on collectivist madness. The revolution is coached by a mysterious “Mr. Jones,” who wears a suspiciously-devilish Trotsky-like mustache and beard. The conspirators use a combination of tactics. Top-down approaches include co-opting a Himmler-like communist sympathizer Senator (this combination of left-wing and right-wing totalitarian visual signifiers reappear throughout the comic). But there are also bottom-up, grassroots efforts, as the communist subversives operate through varied “front” groups dedicated “to oppose fascism or intolerance or something else that is unpopular.” Labor unions provide a venue for the manipulation of American workers: “our strategically placed leaders can paralyze certain industries anytime you give the word.” The comic is very careful to state that workers themselves are not predisposed to communism; it is the union leaders who are to blame. The entertainment industry and mass media are also considered a useful ally of the communists, prefiguring the recent contemporary vogue for right-wing conspiracy theories about “cultural Marxism.”

The communists also actively foster racial, ethnic and religious hatred and strife in key organizations to help tear apart the social fabric of America—as if the America of 1947 needed any help in such efforts. In fact, the entire comic seems to suggest that communists lie in wait to take advantage of existing American class and racial strife, as well as the possible failure of capitalism to deliver on peace, prosperity, and material security. (Food anxiety was rampant globally in the years immediately following World War II and American memories of the Dust Bowl were only a decade old.) This tacit admission that America is riven with these pre-conditions and tensions for revolution, social problems that communism is meant to alleviate and erase is a curious one. One of the “Ten Commandments of Citizenship” on the back cover of the comic encourages individual action as the only way to fight these social ills: “4. Be tolerant of other races, religions, and nationalities.” No solutions for the systemic root causes of such strife are offered by the comic, of course: only the raw fear that they might be exploited by the left to the end of establishing a Stalinist dictatorship in America.

In this vein, within much of the narrative of the communist takeover, the tactics used by the conspirators feel like a strange mélange of the rise of Bolshevism in Russia in 1917 and Nazism’s rise in Germany in the ’30s. Strikes and racial pogroms lead to emergency measures, which in turn trigger a terrorist attack that kills both the President and Vice-President (the comic’s use of a bomb-thrower assassin feels more like an artifact of early 20th century anarchism than midcentury communism). The communist infiltration continues at the highest levels of political office, and, interestingly, within the armed forces as well (prefiguring the recently-elected Catholic Senator Joseph McCarthy‘s imminent accusations of communist infiltration of the State Department and the Army).

And in the course of events, Catholics—innocent parishioners and clergy alike—suffer pointedly under the transitional government, which blames fascists and religious conspirators for hoarding and destroying food stores during a time of famine. Clergy of all stripes are eliminated for sounding the alarm bells about the communist takeover. Schools and universities are nationalized, the free press outlawed. A Catholic tries to stop a book-burning headed by the diabolical “Jones” (who hilariously foils the assassination attempt with an expertly flung Bible into the assassin’s face), and a vast anti-Catholic persecution (tied together very closely with a confiscation of Americans’ firearms) begins using this would-be Papist assassin as an excuse. This has to be a cultural echo of the famous Gunpowder Plot of Guy Fawkes, one of Western history’s most foundational anti-Catholic conspiracy theories. Eventually famine stalks the land, labor literally becomes state slavery (complete with a whipping scene obviously meant to evoke the American legacy of chattel slavery of Africans), and the communist takeover is complete. The Animal Farm-like coda where the communist conspirators are seen wearing white ties at a banquet, and where “Jones” receives his comeuppance in a Machiavellian maneuver straight out of Stalin’s Kremlin, is particularly humorous.

Of course, the scenario in Is This Tomorrow? is laughable in retrospect (as are successor works in very much this same spirit, such as 1952’s Invasion USA), but its brand of anti-communist propaganda is quite canny, using historical example and political reality to effectively drive home its point. The idea of using a comic book is also a very shrewd one at this point in American history. The average American Catholic in 1947, whether catechized child or adult (World War II veterans came home from the front avid fans of reading, comic books in particular) would recognize many of the symbols and signals in the text from school history lessons or from recent headlines. The unknown author of Is This Tomorrow? was no dummy, deliberately pushing the right buttons with respect to Catholic minority anxiety about acceptance in a largely Protestant nation, as well as the historical tendency towards anti-Catholicism both in Europe and in America. One wonders if the white-tie affair at the end of Is This Tomorrow? is less a communist banquet and more an anxiety dream born of decades of WASP anti-Catholic oppression.