I’m finding it oddly difficult to write about UFOs Are Real, a low-budget UFO documentary from 1979. Not because there’s not a lot to say about it, but instead, thanks to the outsized role it played in my formative years, there’s ultimately far too much. As this is another in our occasional series of Recollections here on We Are The Mutants, I hope you’ll indulge me a first-person narrative through this odd little movie’s history, its journey to my childhood television screen, and its subsequent place in my life.

UFOs Are Real was written and directed by B-movie auteur Ed Hunt. Given the speculative complexion of many of his low-budget sci-fi thrillers in the 1970s—Point of No Return (1976), Starship Invasions (1977), and Plague (1979)—UFOs Are Real, Hunt’s first documentary, was quite obviously a labor of love and a passion project. In Starship Invasions, Hunt used the corpus of then-current ufology and Bermuda Triangle-related Forteana, contactee myth from the ’50s and ’60s, and other esoteric lore to populate his tale of beneficent and malevolent alien races secretly fighting over planet Earth. With its Manichaean tale of a “League of Races” (resembling the ethereal giant “Nordics“) taking on a reptilian “Legion of the Winged Serpent” (led by Christopher Lee as “Captain Rameses“), Starship Invasions synthesizes the inherent spiritual drama that was predominant in ufology up until the 1970s, when the field began to depart from its more mystical roots and enter into the quasi-empirical. UFOs Are Real follows on the heels of a decade full of documentaries seeking to explain the UFO phenomenon, from the Chariots of the Gods-inspired, Rod Serling-narrated trilogy directed by In Search Of… producer Alan Landsburg, to another Rod Serling-narrated film, UFOs: Past, Present, and Future (1974), to stock-footage-filled drive-in space-out fare like UFO-Exclusive! and UFO: Top Secret (both 1978).

Because of its low-budget origins, UFOs Are Real ended up as mid-afternoon weekend fodder on local UHF television stations in Boston during my childhood in the late ’70s and early ’80s. (One other odd place the film showed up in the early ’80s was as part of the initial offerings of a nascent chain of Fotomat-aligned video rental outlets, thanks to an agreement with UFOs Are Real producer/narrator Brandon Chase’s Group I Films.) Chancing upon the eerie, foreboding tones of the soundtrack on UHF television, the blurry black-and-white photo and film evidence, and the crude artists’ renderings of seminal ufological events such as the Travis Walton and Betty and Barney Hill cases, my credulous young mind and eyes were riveted to the TV screen. 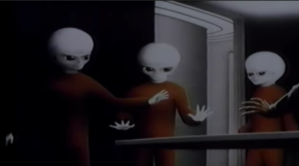 I’d already gotten a thorough taste of the 1970s’ predilection for Weirdness, of course. The screaming headlines of supermarket tabloids proclaimed UFO abductions and miracle cures, conveniently located right next to other artifacts redolent with magical power, such as the arcane folkloric astronomical tables in the Old Farmers’ Almanac, or the swinger-lite pop-astrology of Starscrolls. There were the sober considerations of the existence of alien intelligence on Carl Sagan’s Cosmos, which, just like UFOs Are Real, features a reenactment of the Betty and Barney Hill abduction in Episode 12: “Encyclopedia Galactica.” And of course there was the wonder- and terror-filled third act of Steven Spielberg’s Close Encounters of the Third Kind. (We’ve already talked in these pages about how important Alan Landsburg and Leonard Nimoy’s In Search Of… was to me as a kid.) A Gallup poll from 1978, cited in UFOs Are Real, revealed that nearly two-thirds of Americans believed that UFOs were in fact real; this was the peak level of UFO belief recorded during the Cold War. Aliens and magic seemed to be everywhere in the late ’70s and early ’80s, and with a child’s sponge-like ability to absorb the signals in the ether around me, these motifs, narratives, and symbols settled into my brain at a very formative, influential age.

All the documentary’s photo and film evidence seemed convincing to my young eyes, but when Hunt backed that up with officers from the armed forces, official-looking UFO experts, the testimony of NASA astronauts such as James McDivitt and Gordon Cooper, purportedly authentic governmental documents, and even former Presidents of the United States (Jimmy Carter’s 1969 close encounter is mentioned), a sense of overwhelming authority was conveyed, especially to an impressionable 8-year-old. When the stentorian tones of narrator (and UFOs Are Real producer) Brandon Chase confidently intone in the documentary’s opening minutes—“You are seeing an unidentified flying object. It is NOT a hoax. It is REAL”—over the creepy synthesized tones of the soundtrack and a filmed loop of a UFO sighting on Catalina Island, California, a chill still goes down my spine, 35 years later.

The reasons I revisit UFOs Are Real a couple of times every year aren’t all nostalgic, but most of them are. It’s because I know that, despite ancient aliens and UFOs still being a big draw for contemporary fringe documentarians, nothing is ever going to look as bespoke and bricolaged as UFOs Are Real ever again. In many ways, it’s purely this stitched-together aesthetic that fascinates me some four decades later: the faded film stock, the crackly soundtrack, the multimedia assault of photos, film loops, documents, interviews, and sketches. The film was made before the home video revolution; the evidence it presents is decidedly analog, a final document of an era in which the UFO phenomenon was shaky, blurry, and cloaked in mystery rather than presented in high definition (or through computer-generated reenactments).

In a paper I presented at a recent academic conference—“UFOs, Aliens, and the Academy“—I examined these documentaries’ unique visual and sonic aesthetic in the terms of nostalgia theory as made popular by scholars such as Svetlana Boym and Mark Fisher, whom I’ve examined elsewhere in the pages of We Are The Mutants. This late 1970s period was a unique time in the postwar West, a set of “hinge years” upon which the Aquarian weirdness of the revolutionary 1960s found widespread cultural penetration and popularity, while garbled analog signals and media shouted their last hurrah in the face of an increasingly recordable, digital, consumerist media landscape. My own personal life-narrative straddles these two eras: my TV-saturated childhood was a liminal journey on the borderlands between analog and digital. While my early childhood was haunted by the faint, spectral traces left by the ghosts of over-the-air antenna-received television, the media of my later childhood and adolescence was brought into my home crystal-clear by coaxial cable, recorded and endlessly replayable on “high-fidelity” VHS. Is it any wonder a stitched-together, eerie document like UFOs Are Real looms so large in my childhood memory, its faded film stock and analog synth soundtrack an artifact from a seemingly-distant era, yet one I can still faintly remember?

And yet the afterlife of documents like UFOs Are Real on YouTube, instantly recallable and replayable, does not ruin any of their majesty or mystery for me. Being allowed the ability to recall these memories again and again, to examine the people and places and investigations in these 1970s documentaries of the strange and weird, enhances their power somehow. These memories are real, that distant narrator’s voice seems to state in my head. They weren’t made up, they weren’t a bad dream of a Saturday afternoon in front of the TV. The images that sank deep into my subconscious were real, they were meaningful, and they planted the seeds of a series of obsessions that I’ve carried within my mind and soul since childhood. Carl Jung noted in his initial studies of UFOs that they were a powerful symbol released at a time in human history when the rush of technological advance and the possibility of human extinction rendered humanity more powerless than ever. For me, the UFO is a symbol of childhood wonder, a key and a gate to a simpler time, a time filled with mystery, of uncertainty and questioning, and, yes, even primal fear. Like a shaky Super-8 film of UFOs zooming through the sky, these memories appear, begin to blur and decohere under freeze-framed scrutiny. And then? They’re off like a shot into the heavens.

9 thoughts on “‘UFOs Are Real’: A Childhood Close Encounter”