“A vaguely Scandinavian look characterizes The Corner, [an] ISO-seat facility with waitress service at counters.”

“The grille area of the Market Dining Rooms [is] woodsy, dark, rather masculine, with heavy brass details.”

“The main dining room of The Market: the air of a fine restaurant, but strikingly spare and clean. The stepped ceiling planes in pumpkin color add visual interest and deflect sound.”

“A counter of checkered plastic laminate separates a cafe area from the WTC’s concourse-level lobby. The Corner Restaurant is at the left; the Market Bar and Dining Rooms in the background.”

“Milton Glaser’s whimsical topiary near the entrance to Nature’s Pantry, a health-food section of The Big Kitchen.” 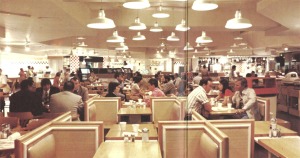 “Largest of the World Trade Center’s new concourse-level restaurants is a selfservice facility called The Big Kitchen. Checkerboards of colored tile are a motif repeated throughout. Custom seating recalls the cane upholstery of turn-of the-century streetcars.” 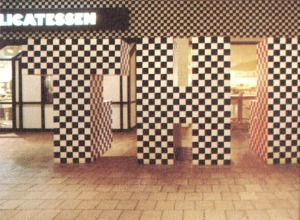 “Giant letters (by graphic designer Milton Glaser) announce the restaurant boldly, while serving as space dividers and even occasional seating” 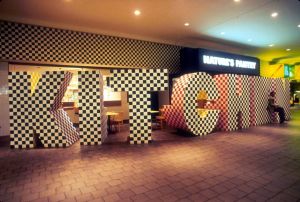 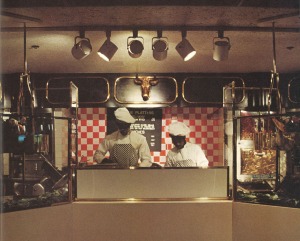 “Four of the many food counters which serve The Big Kitchen. A grille for hot meats: an undercounter exhaust system makes an overhead hood unnecessary.” 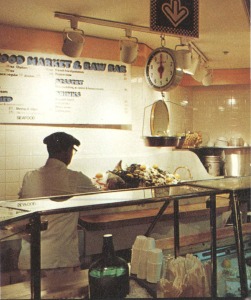 The Big Kitchen, one of the country’s first large-scale food courts, opened in 1977 in the underground concourse of the World Trade Center complex. Conceived by famed restaurateur Joe Baum and designed by Philip George and Milton Glaser, the Big Kitchen comprised 8,000 square feet and offered, among other things, sit-down dining rooms, fresh fish, health food, a delicatessen, a bakery, a rotisserie, a cheese station, a soda fountain, and a coffee shop, the latter featuring seats that “folded up in the afternoon and [were] stored in specially designed booths hidden under a bank of pay phones.”

Graphic designer Glaser had just gained national recognition for the “I Love New York” logo, commissioned by the state to encourage tourism and combat (accurate) perceptions of the urban centers as derelict and pervasively violent. For the World Trade Center job, he installed 7½-foot letters (in custom font) that spelled out “BIG KITCHEN,” the sculptures serving all at once as partitions, nooks, tables, and seats. The checkerboard theme used on the letters and throughout the restaurant interiors recalls both the Memphis Group and the 1977 black and white Vans slip-on, which became a national fashion obsession after appearing in 1982’s Fast Times at Ridgemont High.

At the time the Big Kitchen opened, it was part of a massive, 170,000 square foot operation including 22 restaurants that spanned both Towers and the concourse, all of it meticulously overseen by Baum. His idea was to “fracture the mass,” filling large spaces with small, breathable clusters. The Big Kitchen alone was “projected to gross $20 million a year,” but the “showpiece” restaurant was the opulent Windows on the World, located on the uppermost floors (106th and 107th) of the North Tower. Soon after opening in 1976, the waiting list for the “no-holds-barred Baum production” stretched to six months.

The photos and captions above are taken from 1981’s The Interiors Book of Shops & Restaurants, by Pilar Viladas.

One thought on “The Big Kitchen at the World Trade Center, 1981”