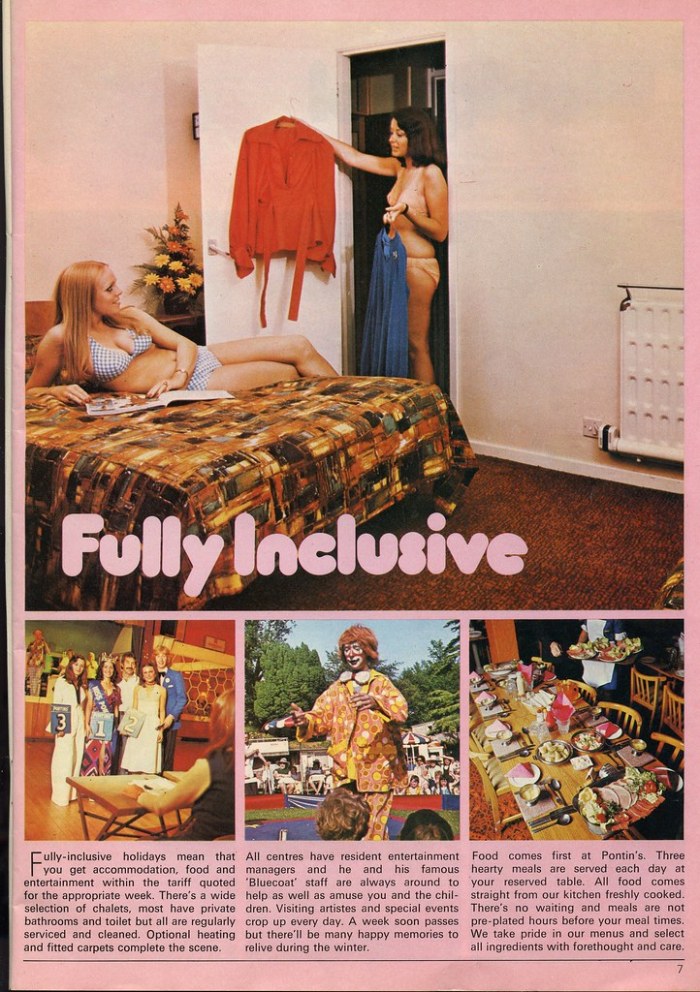 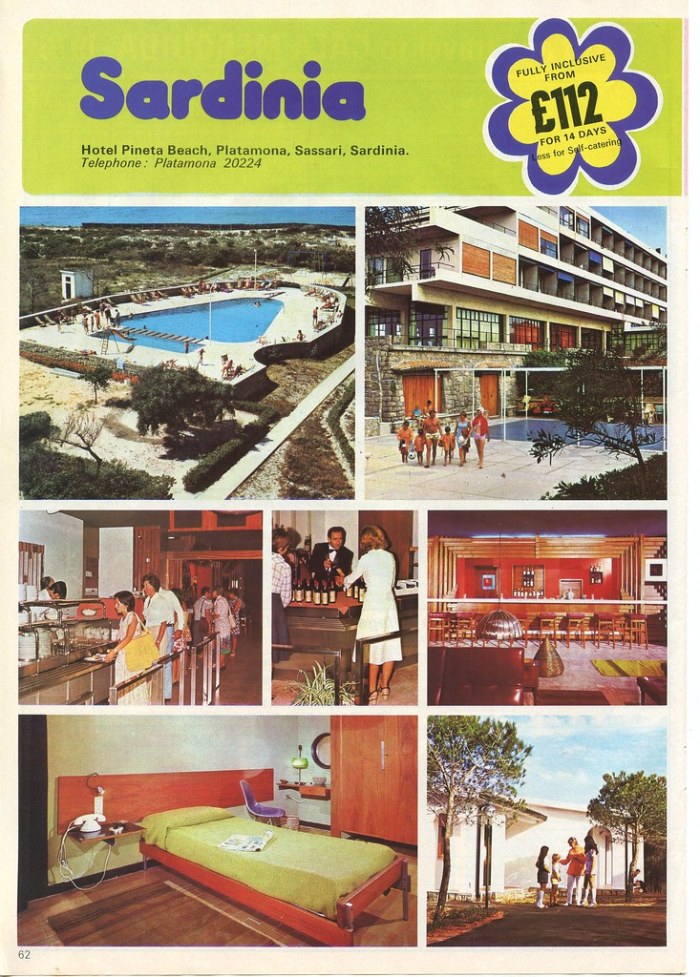 A potent ingredient of the “You’ve never had it so good” mindset of post-post-war Britain was the modern holiday. Traditionally, the British industrial working- and lower-middle-classes had spent what holidays they’d managed to prise out of the generous fists of their employers in one of the many resorts dotted along the island’s coast. Sometimes these were accessed through coach trips, while for those staying longer, accommodation was usually in “guesthouses” of famously varying quality, which often imposed draconian rules such as not allowing guests to return between breakfast and dinner. In the inter-war period, however, the first holiday camps had begun to spring up, and—perhaps driven by the familiarity of demobbed servicemen with the pleasures of the continent—the industry went into overdrive after WWII.

The idea of this new British holiday camp was to provide clean, modern, affordable family relaxation and entertainment whatever weather the notoriously punishing British climate decided to serve up. The two largest holiday camp chains were Butlins, which had opened in 1936, and Pontin’s, which was opened immediately after the end of WWII by London grammar school boy Fred (later Sir Fred) Pontin. Steeled by his wartime experience creating and managing hostels for metal and sugar beet workers, Pontin took out a bank loan after the cessation of hostilities to buy Brean, a former military base in Somerset which, in 1946, became his first holiday camp.

Activities in Pontin’s camps were regimented by “Bluecoats” (as differentiated from Butlin’s Redcoats), a uniformed staff tasked with breaking down the Brits’ traditional reserve and diffidence about socializing with strangers whilst sober. The Bluecoats and Redcoats provided generations of British extroverts with opportunities to pester their less-outgoing countryfolk, and provided a recruiting ground for the burgeoning TV industry.

A glance through the brochure for the 1976 season shows an almost unrecognizable Britain—portrayed in archetypal contemporary graphic design and palette—where the majority of Pontins’ camps offered wrestling, cavernous theatres hosting talent shows, revues and elegant grandmother competitions, mini-golf, lounge bars, boating lakes, fish and chip shops, Wild West nights, a nappy service, donkey racing and—tellingly, as regards the UK’s then relationship with visual media—TV lounges for “exciting colour on BBC and ITV.” A simple, merry world of communal and regimented fun and services that provided generations of Brits with memories, most of them happy.

The various camps had their own distinctive local personalities, the blurb for Middleton Tower in Morecombe boasting that “Northerners pride themselves on a club life second to none,” and Butlins holidaymakers could choose between self-catering chalets or fully-inclusive room, “most of [which] have private bathrooms and toilets,” and offering a daily maid service that “relieves mum of the more irksome chores.” Butlins was especially alluring to parents thanks to the wide range of supervised children’s activities on offer and the slightly-ominous-sounding “nightly chalet patrols,” which promised to “free parents for evening entertainments.”

By the late seventies, holiday camps were facing increasing competition from a camping industry stimulated by the back-to-nature ideals of the counterculture and from the growing numbers of package tours to low-cost Mediterranean destinations. Pontin’s was to some extent insulated from this by offering its own continental package holidays abroad, the brochure explaining, “For most holidays are too short and… the lure of going abroad is the sunshine.” “Pontinental” (the British love of a wince-inducing pun always a key element of Pontins’ advertising) holiday villages included locations in Spain, Majorca, Sardinia, Ibiza, Greece, Morocco, and Yugoslavia. The brochure emphasizes that Pontin’s continental clients will encounter “No nasty shocks,” elegantly eliding the deep-seated British fear of the “foreign” that has played such a nightmarish role in recent national history, explaining “There just isn’t time to get tongues twisted over unfamiliar languages or sensitive stomachs conditioned to strange foods.”

The assertion that “you can feel secure here because we control and manage the hotels and holiday villages at which you stay,” certainly references the widespread urban legend regarding tourists arriving in Spain only to find their hotels still under construction and being forced to subsist for ten days on a diet of Paella and Rioja. It was an urban legend that my Nana, an enthusiastic early adopter of the cheap continental package holiday, encountered in less legendary form during a mid-’70s stay in Mallorca. In her case, the forced encounter with unfamiliar languages and sensitive stomachs proved a beguiling one, and she returned a lifelong convert to Mediterranean life, subsequently decorating her house with bullfight posters and toreador and Flamenco dolls.

Testament to the residual affection for the holiday camp paradigm is the success—even while holiday camps themselves died a slow death as other, more individualistic forms of leisure took the fore—of BBC sitcom Hi-De-Hi, which ran from 1980 to 1988. Written by ex-Redcoat Jimmy Perry and set in the fictional Maplins holiday camp, the series made stars of Yorkshire comedian and ex-miner Paul Shane, Welsh actress Ruth Madoc and multi-talented comedy actress and singer Su Pollard.