Jefferson Airplane/Starship’s Grace Slick on the cover of the April 5, 1980 edition of Cash Box to promote her 1980 solo album Dreams. 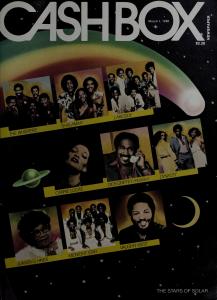 The Alan Rudolph-directed 1980 Meat Loaf vehicle Roadie may be forgotten, but the lineup of bands featured in the film and its soundtrack is a perfect time capsule of 1980 pop music. 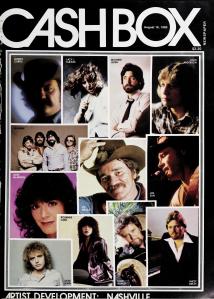 Along with Black music, Cash Box frequently gave its cover to country artists, the genre’s rising stars showcased in this issue. 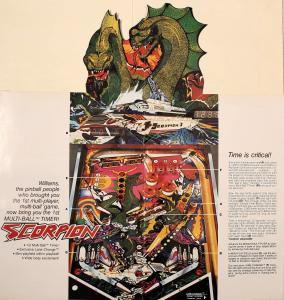 In the special issue dedicated to the 1980 Amusement and Music Operators’ Association Expo, ads for pinball and arcade game companies abounded. This full-color ad for Williams’s Scorpion pinball contains a full write-up of its timed multi-ball feature. 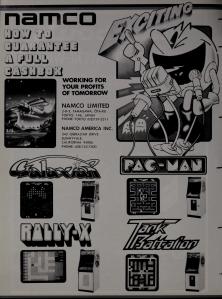 Japanese video game manufacturer Namco was just beginning to conquer America with Pac-Man; here the game anchors the Namco AMOA full-page ad along with Galaxian and some lesser-remembered Namco titles.

Atari was already invading American homes in 1980; this ad for AMOA shows off some of Atari’s arcade machines as well. 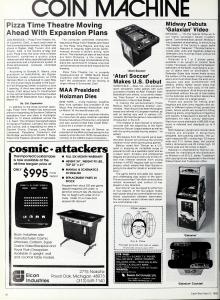 A typical “Coin Machine” feature from 1980, this one heralds the arrival of one Charles Entertainment Cheese at Nolan Bushnell’s “Pizza Time Theatres.” 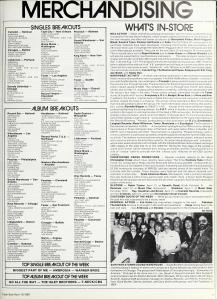 On this typical “Merchandising” page from Cash Box, local record stores from around the country report in on their best-selling singles and LPs; industry promotional efforts receive a write-up on the right.

A report from the summer 1980 Consumer Electronics Show in Chicago reveals the kinds of movies being sold on videocassette in 1980: classic Hollywood films, music video features, instructional videos on child care, sports specials, and “adult features” like Emmanuelle.

Cash Box magazine was a music industry monthly that was in print from 1942 to 1996. Like its industry counterpart Billboard, Cash Box contained multiple weekly music charts based on music genres, from Pop to R&B to Jazz to Classical. Throughout their respective histories, Billboard and Cash Box used slightly different formulae to determine their music chart standings. Billboard‘s numbers during the rock era (until the development of SoundScan in 1991) were determined by a combination of radio airplay, in-store sales, and jukebox placement. Cash Box‘s charts, right up until the late ’70s, were almost solely based on sales and jukebox play. In fact, one of Cash Box‘s major reading audiences were the manufacturers and sellers of coin-operated entertainments: jukeboxes, midway machines, pinball machines, and, eventually, arcade video games. As Archive.org archivist Andrea Mills says on the Cash Box Internet Archive page, “Not everyone was able to afford a radio, but did frequent places of entertainment and social interaction that had jukeboxes. These places were located in inner cities, rural communities, small towns, and ethnic enclaves. Consequently, Cash Box includes information about under documented communities that are not available in other, similar sources.” In addition, the exclusion of radio airplay as a weighing factor removes the influence of record industry payola, a big problem during the first years of rock and roll (and again in the late 1970s, when cocaine often took the place of cash and gratuities to radio DJs). As such, there are a number of songs that hit #1 on Cash Box that never got near the top spot of the Billboard charts, and vice versa.

The Cash Box issues and excerpts featured in this exhibit all come from the year 1980, after the Cash Box chart method determination switch and during the first bubblings of the video arcade revolution. During this general period, Cash Box covers mostly featured familiar promotional shots of some of the artists detailed within. Within each roughly 30-to-60-page issue are a few front page stories on the music industry, genre charts and breakdowns for each singles chart, the favorite hot singles at some of the biggest radio stations and markets nationwide, record store merchandising and promotional program reports, international music news, and finally the “Coin Machine” section with the latest in coin-operated entertainment news and reviews, where the 1980s industry shift from jukeboxes to joysticks can be vividly seen.