When things look bad—and globally, they look pretty bad at the moment—I take a strange consolation from the fact that this is not the first time in recent history that the end of the world has been seriously discussed. In 1982, when I was living in suburban Melbourne, a couple of years off finishing school, it was pretty much all I thought about.

The second Cold War, or the New Cold War as some called it, was well underway. Thatcher was UK Prime Minister and Reagan had been elected to the White House. Détente was out; aggressively rolling back the supposed threat of the Soviet Union—which in reality was on the verge of economic collapse—was in. Tensions were particularly high in Western Europe, where massive political opposition had arisen to the imminent deployment of American Pershing II medium range ballistic nuclear missiles, seen by Washington as necessary to match the destructive power of Soviet SS20 nuclear missiles stationed in Warsaw Pact countries.

I read everything I could find about geopolitics as it related to the nuclear arms race. As silly as it sounds to me now, I remember being alarmed by the sound of planes in the night, a sure sign, or so I thought, of imminent nuclear Armageddon. Desperate for some way to make a difference, I became involved in the peace movement that was then becoming a major political force in Australia. My most recent deep dive into these memories was caused not by a snatch of news describing the dire state of global warming or the imminent threat of another war in the Middle East, but a spur of the moment viewing of a 1983 British political thriller, Who Dares Wins (released in the US with the considerably more apocalyptic sounding title The Final Option).

In May 1980, British film producer Euan Lloyd watched TV footage of British Special Air Service (SAS) commandos storm the Iranian embassy in London. Six days earlier, armed members of an Arab group campaigning for sovereignty in the southern Iranian region of Khuzestan had stormed the embassy, taking 26 hostages. In return for their release, the group demanded freedom for Arab prisoners in Khuzetan and safe passage out of the United Kingdom. Frustrated by the lack of progress in their negotiations, the men killed a hostage and threw the body into the street. Thatcher immediately deployed the SAS (whose motto is “who dares wins”), and commandos were shown on TV abseiling down the roof of the embassy building and entering through the windows, quickly killing five of the six hostage-takers and rescuing all but one of the remaining hostages. The commandos faced accusations of unnecessarily killing two of the five gunmen but were cleared by an inquest. The action brought the SAS’s largely secret operations into the public realm for the first time.

Lloyd’s first film industry gig was as a publicist on a 1953 British movie, The Red Beret, starring Alan Ladd as an American who enlists in a British parachute regiment in 1940. His more recent production credits had included the rather lackluster war/adventure film The Sea Wolves (1980), and, before that, the vastly more successful The Wild Geese (1978). Recognizing a good idea when he saw one, Lloyd immediately registered the title “SAS: Who Dares Wins,” and set about making a film based on the siege.

Who Dares Wins opens with a large peace demonstration in central London, organized by a stand-in for the real life Campaign for Nuclear Disarmament, the People’s Lobby (PL). The rowdy demonstration is brought to a halt when a protestor is killed by a crossbow bolt in the throat, fired by an unknown assailant. The dead man, we find out, was actually an agent of Britain’s domestic intelligence agency, MI5, spying on the PL, which authorities believe has been infiltrated by a radical group planning a major act of political terror in the near future. 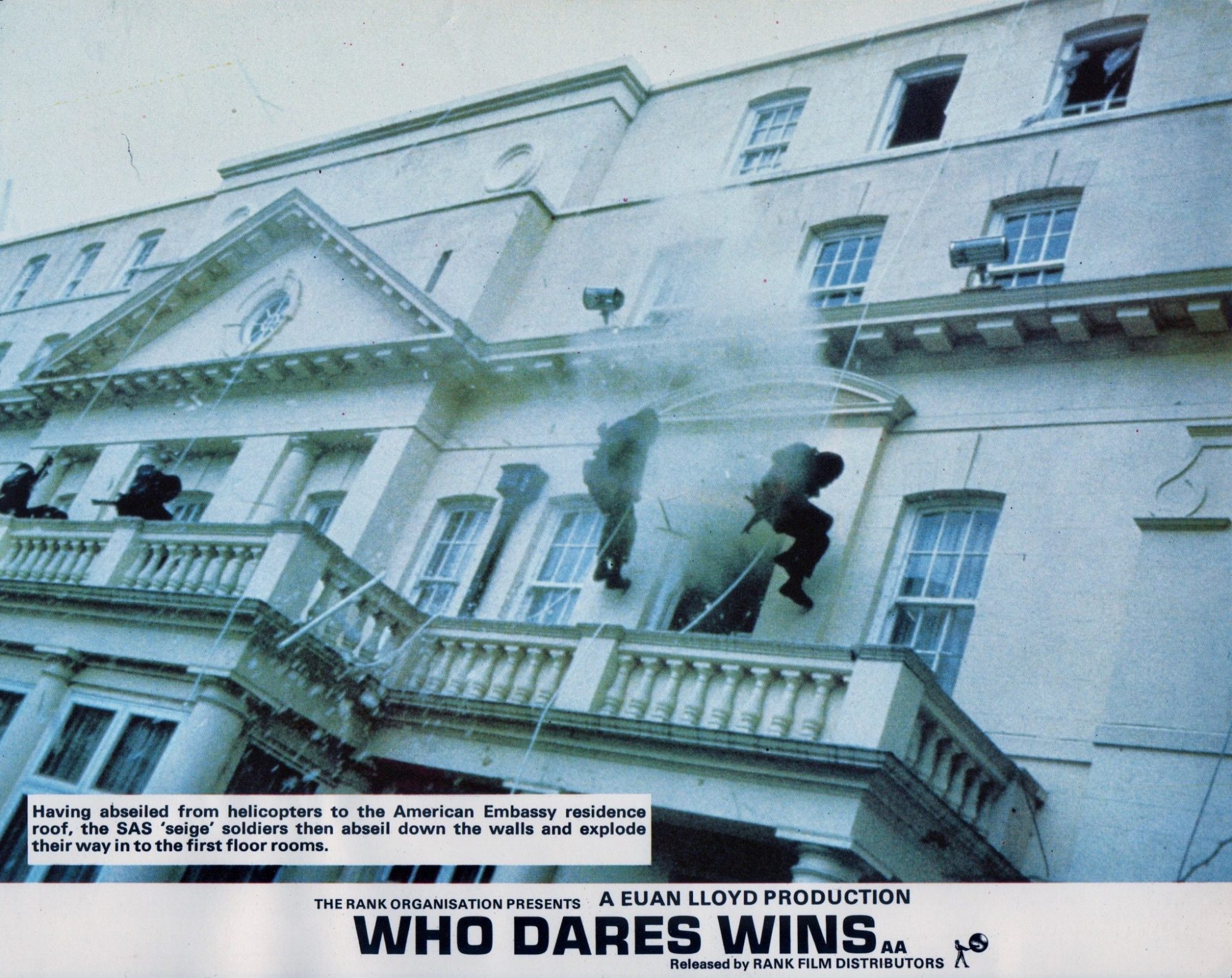 In another attempt to infiltrate PL, the authorities fake the expulsion (for brutality) of a tough SAS captain, Peter Skellen (Lewis Collins). His entrée into the radical group operating within the PL comes via the seduction of its leader, Frankie Leith (Judy Davis), a sports car driving militant peace activist from a wealthy family. Skellen establishes his militant anti-establishment credentials in a post-coital conversation with Leith, during which he describes the PL as “a bunch of middle-class families wandering down the street with their banners… It’s a bloody Sunday outing. You couldn’t knock down a paper wall, let alone a society.”

Leith employs Skellen as security consultant, much to the chagrin of other senior PL leaders, including the even harder line Helga (Ingrid Pitt in full Euro-baddie flight). She follows Skellen, observing a meeting with his intelligence handler—who she later dispatches with a poison spray —and his wife and young child. Helga takes the wife and child hostage to ensure Skellen’s cooperation with the militant’s plans—seizing a gathering of high-level military and political figures taking place at the US ambassador’s residence, including the visiting American Secretary of State (Richard Widmark, in one of his last film roles). Once in control of the residence, the militants announce they will kill the hostages unless a nuclear missile is fired at a Scottish naval base on live television, an act that they hope will demonstrate the horror of nuclear war and inspire a worldwide wave of disarmament.

The last twenty minutes of the film are essentially an advertisement for the lethal efficiency of the SAS. Commandos rescue Skellen’s wife and child by blowing a hole in the wall of an adjoining flat and killing Helga. At the same time, in a facsimile of the Iran embassy rescue, the SAS storm the US ambassador’s residence, and, with Skellen’s help, kill all the hostage takers, including Leith. We last see Skellen jumping onto a departing helicopter, presumably to be whisked back into SAS anonymity.

Who Dares Wins is a competent, if by-the-numbers, political thriller. A particular highlight is Davis, in her first international screen outing, playing a character bizarrely similar to the militant anti-building development activist in Phillip Noyce’s excellent 1981 Australian noir, Heatwave. At one time Britain’s leading action star, Collins, in contrast, is rather wooden as Skellen. After being mooted as a possible replacement to Roger Moore as James Bond—his audition apparently came across as too hardboiled—he would go on to star in a string of Euro exploitation mercenary films that attempted to take advantage of the slipstream created by 1978’s The Wild Geese—Code Name: Wild Geese (1984), Kommando Leopard (1985), and The Commander (1988).

A postscript before the final film credits states that in 1980 alone “terrorists” and “radicals” seized 42 embassies and diplomatic missions worldwide, and 53 people were killed in embassy shootouts. Whatever the reality, Lloyd, director Ian Sharp, and screenwriter George Markstein (whose credits include the 1974 film The Odessa File and the 1967 heist drama Robbery) appear to have had their sights set on tackling other issues.

Lloyd told the Los Angeles Times in September 1983, “Since John Wayne and Jack L. Warner [the staunchly Republican, anti-communist driving force behind Warner Brothers Studio] have left the scene it’s become unfashionable to wave the flag.” He is also on record as hoping the film would counterbalance the radical politics of cinematic offerings such as The China Syndrome (1979) and radical filmmaker Costa-Gravras’s blistering take on post coup d’etat Chile, Missing (1982). In fact, Ronald Reagan requested a private screening of Who Dares Wins soon after the film was completed, and he gave the film a “rave review.” Reagan’s former Secretary of State, Alexander Haig, who had recently joined the board of MGM/UA, also enjoyed the film, and on his recommendation MGM distributed the film in the US, where it met with a lukewarm reaction. 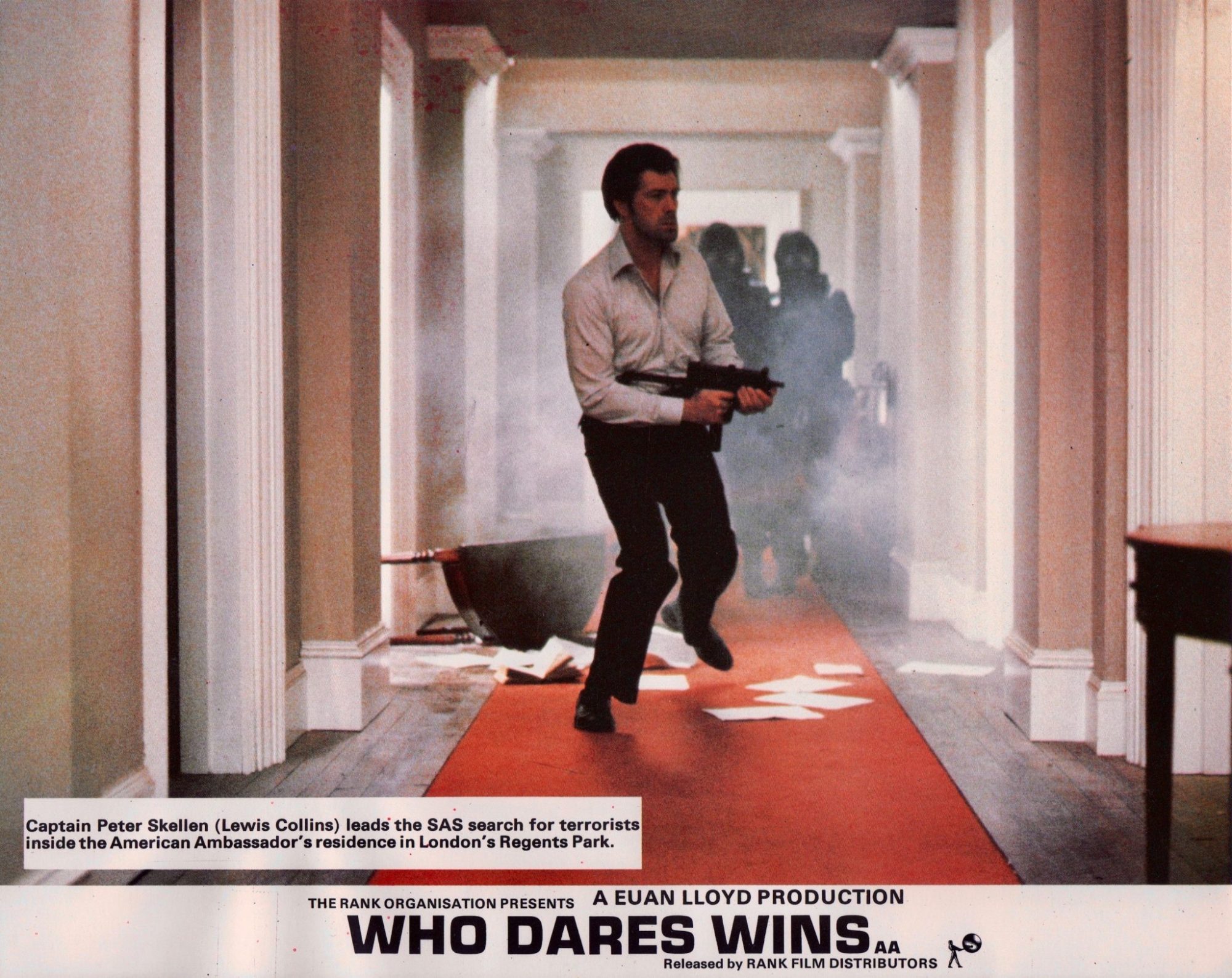 As a senior policeman says at one point in the film, “We are dealing with hardcore revolutionaries using the peace movement as a cover.” The idea that the anti-nuclear and peace movements were fronts for communists and even more sinisterly intentioned political groups was a common reactionary anxiety during the 1980s. This aspect of the plot is given added grunt by the presence of a foreign moneyman, Malik (Pakistani actor Tariq Yunus), who arrives in London to dole out cash to various ultra-left causes, including the PL. A politician laments the SAS’s actions, saying, “In a perverse way we have strangled a desperate cry for peace.” The last scene shows the politician meeting Malik for lunch. The moneyman laments that the PL militants that carried out the raid were “amateurs.” The clear inference is not only that there will be more attacks, but that civilian politicians are unreliable and soft against the threat of terrorism, with constant vigilance required by the security forces—a refrain that has been more or less ubiquitous in the US following 9/11.

Despite early indications by the UK Ministry of Defence that the film might violate the Official Secrets Act, Who Dares Wins was made with the active cooperation of the SAS, which loaned the production the three military helicopters seen prominently in the film. Director Sharp spent time at the SAS headquarters of Stirling Lines, in the British Army garrison of Credenhill, Hereforshire, and even met with some of the troops involved in the 1980 Iranian embassy assault. In an attempt to weave this material into the film, Who Dares Wins includes numerous scenes set in an SAS training camp, including men jumping from helicopters and storming buildings, which are vaguely reminiscent of the SPECTRE training camp in From Russia with Love (1963). In contrast, Ingrid Pitt drilling PL militants in the use of machine guns (their targets are peace signs) in an unspecified underground bunker looks pretty second rate, and sets up the militant peaceniks for obliteration by the SAS.

Despite its avowedly right-wing politics, the film functions as a strange time capsule of the radical left-wing politics at the time and, most important, of a mass street movement that does not really exist today, even with the growing opposition to the equally catastrophic threat of climate change. The opening peace rally is eerily reminiscent of so many I went on: painted faces, signs that read “No More Hiroshimas,”  and chants such as “I-2-3-4, we don’t want a nuclear war. 5-6-7-8, we don’t want to radiate.” Skellen’s initial contact with Frankie Leith occurs when he visits a club called the Munitions Factory, which is showing an anti-American, anti-nuclear, anti-capitalist dance performance, in which she stars as a human nuclear missile. There’s also a fascinating scene set in a “Rock Against Nukes” rally in a radical Anglican church. “Jesus was a militant radical and were he here physically today, he would be standing at the forefront of our ranks, eyes blazing with anger at the destructive horrors that humankind has heaped upon itself,” a priest tells the crowd after a set by a local prog rock band. “Time is running out and the people are starting to say ‘enough’.”

So much so that one group of anti-nuke demonstrators are prepared to storm the U.S. ambassador’s residence and kill every hostage unless a nuclear bomb is detonated to show the horror that is staring the world in the face. While it was no doubt written to showcase the naiveté of peaceniks, an extended scene in which Leith debates the room full of powerful white men who are held hostage nonetheless has a ring of authenticity for anyone on the left who has ever tried to speak truth to entitled power. “I suppose you have thought about the horror of a nuclear explosion?” argues the U.S. Secretary of State at one point in the debate. “Oh yes, I have. The death. The devastation, mutilation, the agony, carried onto the next generation. All of it. The horror never leaves my mind.”

Andrew Nette is a writer of fiction and non-fiction. He can be found at www.pulpcurry.com.

5 thoughts on ““The Horror Never Leaves My Mind”: Ian Sharp’s ‘Who Dares Wins’”