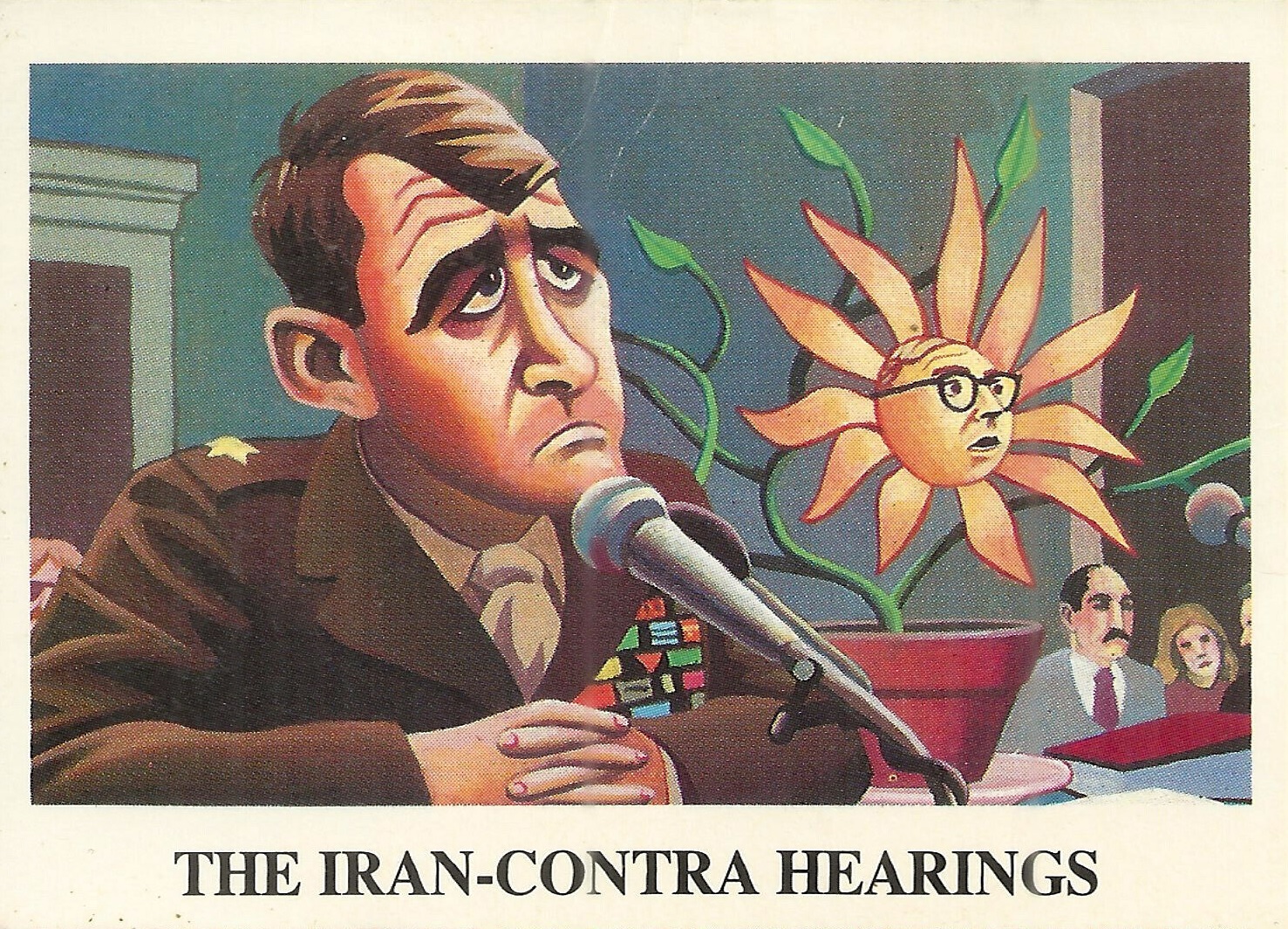 When we think of trading cards, the late-1980s Iran-Contra scandal probably does not jump to mind. But in 1987, Paul Brancato, a violinist for the San Francisco Orchestra, and Salim Yaqub, then a young designer just out of art school, teamed up to create a set devoted to exactly that. The idea behind the cards (you can see them all here), released in 1988 by Eclipse Enterprises, was to “publicize the basic scandal and talk about the main characters,” according to Yaqub in an interview. As the hearings wore on and the details became more and more labyrinthine, the cards aimed to “generate wider public awareness” of the affair and featured 36 of the “players,” Yaqub said.

In the fall of 1987, Yaqub answered an advertisement for a political artist posted on a bulletin board at his art school. This led to his meeting with Brancato, who financed the project himself. Yaqub developed the idea of doing portraits for the cards, illustrating a sample card to get the job. The two worked together to develop the project. One side of each card featured Yaqub’s drawing; the other side featured text written by Brancato. Some of the images are quite visceral and effective political commentary.

Yaqub noted that Brancato had some conspiracy theory interests that Yaqub aimed to dampen for the sake of the project. Yaqub said that a few of these theories, those involving the Kennedy Assassination, surfaced in the cards that played only a tangential role in Iran-Contra, such as Card 10 of Rene Corvo and Felipe Vidal, both of whom who were members of the CIA’s Brigade 2506 in the Bay of Pigs Invasion.

The cards aimed to give an overview of the incredible nooks and crannies of the entire affair, showcasing the strange cast of players in the US, Latin America, and the Middle East. The cards start with the Iran-Contra Hearings themselves (Card 1), depicting a dour and seemingly cowed Oliver North. The hearings were intended to focus on whether President Ronald Reagan (Card 36) had known “that the funds generated by the sale of missiles to Iran had been diverted to the Nicaraguan contra rebels at a time when Congress had forbidden government support for them, and the question of where the profits from these sales actually went” (Card 1).

The Contras were fighting against the Sandinista National Liberation Front (FSLN), the latter group having finally won the bloody civil war against the long and brutal dictatorship of Anastasio Somoza Debayle (Card 2) in 1979. The US was terrified about any communist influence in the Western hemisphere and felt that action was necessary—even illegal action. The Contras were led by Enrique Bermudez (Card 3), depicted in a green uniform in front of gun-wielding soldiers, who was Somoza’s military attache in DC. Bermudez teamed up with Ricardo “El Chino” Lau, Somoza’s “hatchet man,” to found the September 15th Legion that was “the nucleus” of the movement. Bermudez would eventually become the military commander of the CIA-backed Nicaraguan Democractic Forces (FDN). 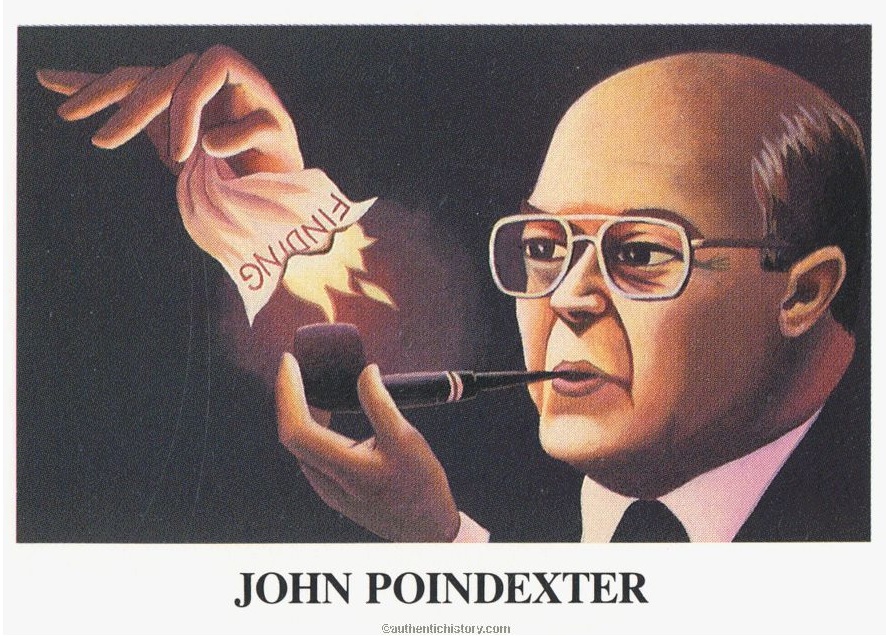 On the US side, Marine Lieutenant Colonel Oliver North (Card 13) of the National Security Council (NSC) was “handed… the contra account, passing on instructions from President Reagan to keep the contras alive ‘in body and in soul.’” He’s depicted in full military uniform, equally regal and pained, presenting himself as the “selfless patriot” despite his profound corruption. He was responsible for funneling the money to the Contras but, “Of the $16.1 million in profits from the missile sales to Iran, only $3.8 found its way to the contras,” the card explains.

But North did not act alone. He had the approval of the head of the NSC, Rear Admiral John M. Poindexter (Card 35). In testimony, Poindexter claimed to believe that the Boland Amendment, which had passed in 1984 and prohibited US interference in Nicaragua, didn’t apply to the NSC. The card shows Poindexter lighting a pipe with a handkerchief with the word “finding” on it, a reference to his role in destroying evidence and lying repeatedly. On the Middle East side, the Arms Merchant Manucher Ghorbanifar (Card 26) facilitated the weapons shipments to Iran and promised to help free CIA Station Chief William Buckley (Card 25), who had been kidnapped by, and was eventually tortured to death by, Shiite fundamentalists. The US had hoped that the sale of weapons to Iran would help would facilitate Buckley’s return. Depicted hanging out near the urinals of a men’s bathroom (graffiti on the wall reads “Ollie was here”), Ghorbanifar was considered untrustworthy, but officials kept disregarding warnings to work with him.

One notable partnership in Latin America was the Medellin Cartel (Card 11) led by Pablo Escobar and Jorge Ochoa. The card describes the relationship between the cartel and the CIA as one of “convenience” and shows shows both men shoveling cocaine up the giant head of Uncle Sam—who is himself buried up to his neck in white powder. The CIA turned the other way to the cartel’s activities, and Escobar and Ochoa gave $10 million to the Contras “as a goodwill gesture.”

In 1987, President Reagan (Card 36) eventually admitted to his knowledge of the affair but insisted that the Contras were “freedom fighters.” His Vice President, George Bush (Card 35), was still insisting on his ignorance of the entire affair—the card shows Bush literally holding back skeletons in the closet—even though he was reportedly at certain pivotal meetings.

As a result of the hearings, North and Poindexter lost their jobs and North was convicted of covering up the scandal. However, North became something of a folk hero to many conservatives: he nearly won a Republican Senate seat in 1994 and later became a Fox News talking head. In 2018, he was elected as president of the National Rifle Association but resigned in 2019, reportedly “forced out” after making allegations that questionable NRA billing practices were endangering the organization’s tax-exempt status.

Within the cards, there were some inside jokes from the testimony. In Card 1, Iran Contra Scandal Hearings, there’s an image of Oliver North and a flowered potted plant with glasses, a reference to North’s over the top attorney, Brendan Sullivan Jr. When told that his objections were not permissible because the hearing was not a court of law, his response was: “I’m not a potted plant.” The final card, number 36, shows President Ronald Reagan as a puppet holding a sign that reads “Just say dough,” a commentary on both his closeness to Big Business and First Lady Nancy Reagan’s disingenuous “Just Say No” anti-drug campaign. When asked about the choice of these images, Yaqub said, “what illustrators do is take a cliché or an expression and give it physical form.”

Brancato and Yaqub had hoped to publish the trading cards in time for the 1988 election. “It’s not that we thought they would alter the election, but we wanted the roll out to be part of the broader debate over the election,” he said. However, due to fits and starts surrounding the project, the cards didn’t end up getting published until December of that year. Despite the delay, the cards made an impact. The New York Times reported that “nearly 10,000 decks” had been sold as of January 13, 1989. The creators were told through a friend of a friend that former President Richard Nixon picked up a deck for himself. Nixon was a big baseball fan and reportedly collected baseball cards and other trading cards. Every time he was in Washington D.C., he had his limo stop at the same sports memorabilia shop, where he allegedly purchased the Iran-Contra cards.

Brancato and Yaqub would go on to create two other political trading card decks: Bush League Trading Cards (1990) and Drug War Trading Cards (1991). The Bush League cards were intentionally made to look like baseball cards; each featured a different member of the administration, with President George H. Bush portrayed as the pitcher and Dan Quayle as a relief pitcher. Yaqub noted that he and Brancato hoped Bush’s chief of staff, John Sununu, would pick up a set because he was a huge baseball card fan. Like the Nixon story, they heard through the grapevine that Sununu did in fact purchase some, but gave them away.

The magic of the political trading cards soon started to fade. “The brand got sullied,” Yaqub said. Other copycat sets started to come out and some were “tasteless and exploitation,” like the controversial True Crime series depicting serial killers. Victims’ families objected to the cards and some state legislatures tried to ban them. Over the years, many other political trading cards have surfaced. In 1989, Eclipse released Friendly Dictators Trading Cards with the tagline: “Featuring 36 of America’s Most Embarrassing Allies.” During the Iraq War in 2003, the U.S. Defense Intelligence Agency devised and distributed Iraq’s Most Wanted playing cards to American military; Saddam Hussein was the Ace of Spades. Yaqub has been approached about doing new cards, but he says he isn’t interested. He went on to have a successful academic career and is now a professor of history at the University of California, Santa Barbara. He’s written about the Middle East in the context of the Cold War in Containing Arab Nationalism: The Eisenhower Doctrine and the Middle East (2004) and Imperfect Strangers: Americans, Arabs, and U.S.–Middle East Relations in the 1970s (2016).

He believes that politically satiric trading cards and similarly subversive send-ups of other mediums will continue, guided by the same ultimate goal: “to make a complicated but damning story more widely known to the public.”

Special thanks to History on the Net for some of the images used in this article.

Elisa Shoenberger is a writer and researcher in Chicago. She is a regular contributor to Book Riot and the Book and Paper Fair blog. She has bylines at The Boston Globe, The Rumpus, Ozy, The Reset, Sonderers, Electric Lit, Rebellious Magazine, and Our Urban Times, among others. She is the co-editor and co-founder of The Antelope, a literary journal of oral history and mayhem.

One thought on ““Looney Tunes and Squalid Criminals”: The Iran-Contra Scandal Trading Cards”