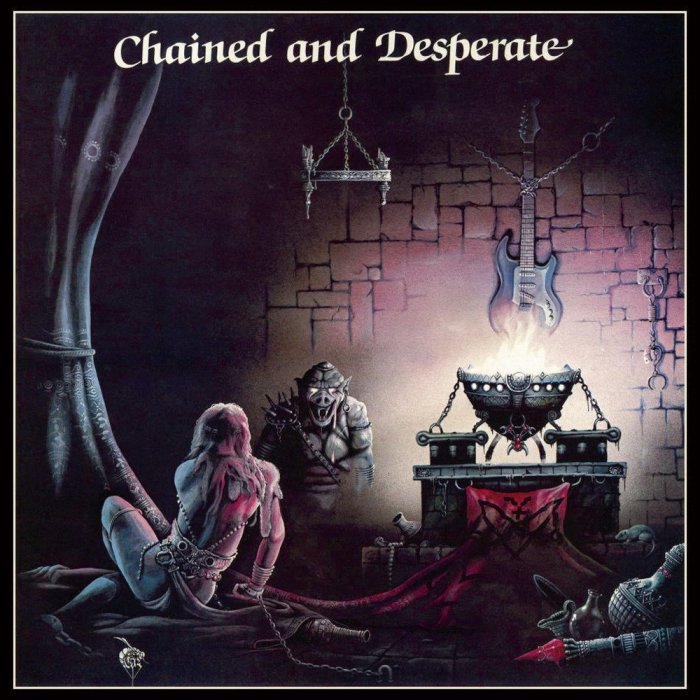 Though active for only a brief period of time, artist Garry Sharpe-Young created a series of LP covers that provide a thrilling miniature survey of the mental landscapes of the British heavy metal music scene of the 1980s. The covers—all produced between 1983 and 1987—capture the lurid euphoria of a particular period of metal’s history when, revitalized by the energy of punk, the so-called New Wave of British Heavy Metal—known to metallers by the sacred and unpronounceable acronym “NWOBHM”—brought an injection of creativity and excitement to a genre many considered moribund, suffocated under the flaccid weight of its own juvenile clichés. Assisted by a DIY approach that was also borrowed from punk, the NWOBHM arrived in the late ’70s with its own thrilling grab-bag of juvenile clichés, or in the worst case took a hungry new approach to those that already existed.

The motifs in Sharpe-Young’s covers will be familiar ones to anyone versed in metal’s preferred leitmotifs—post-apocalyptic wastelands, science fiction, sword and sorcery slop, the occult, war and battlefields, technology and death—but just as the NWOBHM headbangers brought a new prole ferocity and rawness to their music, Sharpe-Young approached his subject matter with a fresh and exciting garishness and spontaneity that clearly displayed the influence of comics and fantasy art (Frank Frazetta, notably), as well as of the artwork flooding out of the nascent video game industry. And what the illustrations might have lacked in slick professionalism they more than made up for with the brute force of their hugely enjoyable silliness.

Despite the relatively slight size of his visual oeuvre (he was apparently inspired by the sight of one of the many particularly awful album covers scattered throughout British fortnightly metal bible Kerrang), it possesses a distinctive aesthetic that, uniquely, doesn’t really resemble anyone else, and its combination of naiveté, technical flair, and all-out punkish chutzpah gives it a vividness and freshness that raises it above most of its peers. And if we can judge by these twelve covers, it seems fair to note that—by the admittedly low standards of the metal scene of the time—Sharpe-Young’s artwork is surprisingly un-sexist, as the intimidating huntress on the cover of Chinawite’s Run for Cover testifies. Something about his creations hints that the late Sharpe-Young was more self-aware than many of his peers in the ’80s, and in fact he went on to became a prominent journalist of the international metal scene.