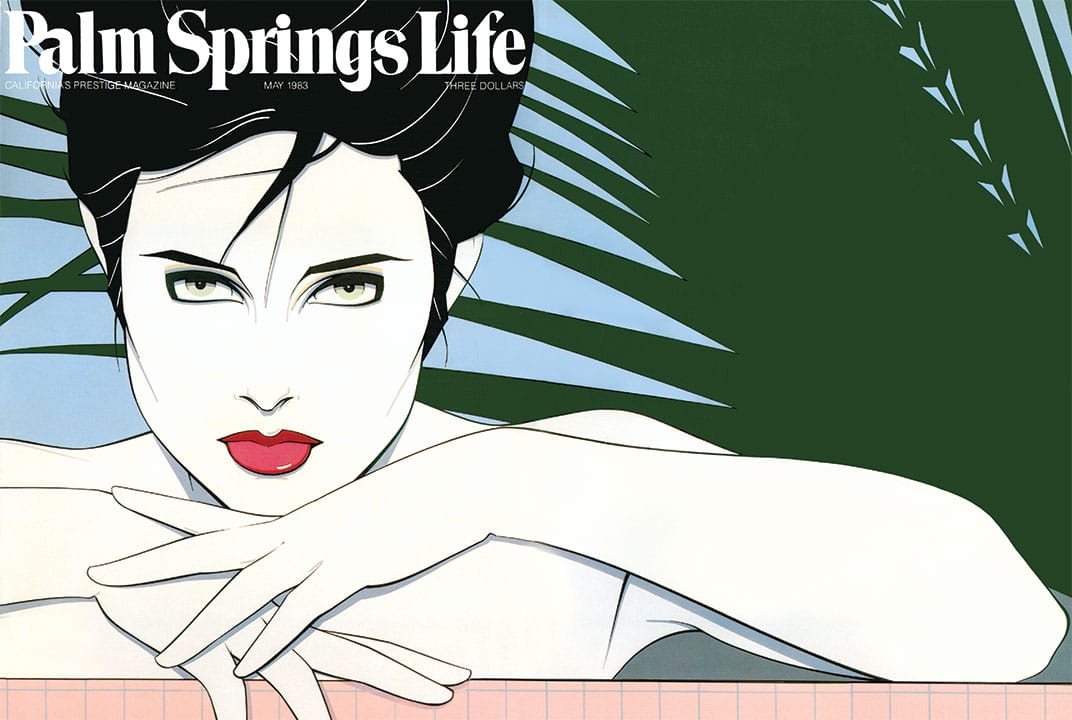 What is America and what does it look like? In the ‘80s, it looked like the world as re-imagined by the Memphis Group, Syd Brak, and Steven Spielberg. Reality was far grimmer, but no one seems to remember all that. Instead, we have a convenient and informal shorthand consisting, in part, of skyscrapers and saxophones, big hair, home videos, fitness fads, and exploitation film franchises. One of the bewildering things about the modern world is its apparent inscrutability, its pure surface. Americans tend to depict the suburbs as places that barely exist, especially if they happened to grow up in one. Everyone is too busy being born and history is always elsewhere. So it’s startling to discover that at least some of these inscrutable things indeed have their origins and histories—that aesthetics have influences, if not designers, despite the origins being perpetually effaced.

“Pervy mall art,” for example, is more likely to conjure the intended genre than the name of Patrick Nagel, its pioneering—and prolifically pirated—graphic artist. Nagel was an illustrator who originated the Eighties goddess, a liberated woman with a perm in place of a chignon, who projected a commercialized image of contemporary femininity. Perhaps most famous as the grinning vixen on the cover of Duran Duran’s 1982 album Rio, the so-called Nagel Woman was often depicted in luxurious sunglasses, large geometric earrings, and little else. Drawn in a slick signature style that recalled Art Deco ads and Japanese art both high and low, she looked like a supermodel or one of the era’s high-heeled leading ladies.

Like the girly, voluptuous, and WASPy Gibson Girl dreamed up by illustrator Charles Dana Gibson (1867‒1944), Nagel’s image of the ideal American beauty was saddled with a host of assumptions. “The eventual American woman will be even more beautiful than the woman of to-day,” Gibson told the New York Times Sunday Magazine back in 1910. “Her claims to that distinction will result from a fine combination of the best points of all those many races which have helped to make our population.” (The full quotation is worth reading.)

Working in the studio with live models, Nagel would take photographs to guide his sketches, then use the sketches to guide his paintings—usually acrylic on canvas. This process of refinement simplified and flattened the original image to a kind of painted fashion photograph. Though he was clearly influenced by a previous generation of illustrators, including Saul Tepper, Nagel’s work was much cleaner, devoted to the clarifying effect of the black line. What his portraits don’t contain is any of the grit and grain of American life. The texture of reality is simplified until nothing but surface remains—a custom airbrushed sheen for a decade fixated on glitz and gloss. Nagel emphasizes the juicy red lips and dramatic windows to the soul of his distant, glamorous, and slightly bored archetype with enviable hair and virtually no nose to speak of. (It’s ironic that Nagel’s one-time assistant mentions his love of women with strong noses because, perhaps with the exception of the portrait of Joan Collins, it’s the most conspicuous missing element.)

Born in the late 1970s, during the course of his early work for Playboy, the Nagel Woman is a playfully inscrutable heroine allegedly based in part on Nagel’s wife, the model Jennifer Dumas. Though preceding the age of computer-assisted design, she looks more like a machine’s rendering of a modern woman than that of a human hand. (The men are equally vacant-looking, with granite chins and pressed jackets slung over their shoulders.) The Carols, Charlottes, Clios, Lorises, and Shannons seem, at times, to represent Nagel’s attempt at personifying glamour and luxury itself on behalf of a decade that was, it is often claimed, the Fifties on club drugs. If it’s true that “at any time there are a few who give form and meaning to their generation,” as the Library of Congress poster curator Elena G. Millie suggests, then it could be said that Nagel came as close as any illustrator to forging a style of his own out of the wacky aesthetic priorities of the era.

Nagel died of a heart attack in 1984, a few years into the reign of MTV, following a rare bout of fitness for a televised Heart Association charity program. (His wife described the late chain-smoking night owl workaholic as a “Noël Coward kind of character.” He also may have had a congenital heart defect.) Yet his aesthetic was just beginning its strange afterlife as period iconography. What no one has been able to figure out, as far as I know, is how and where Nagel’s designs jumped off the wall and onto salon windows across America. How did his exquisitely bored, hopelessly fashionable model woman become shorthand for grooming services—and subsequently dry cleaning, shoe repair, and alterations? Is it just a coincidence that “nagel” is German for nail?

Manicured fingers have been pointed at Nagel’s publisher, Karl Bornstein of Mirage Editions, who can be seen along with Nagel in this rare interview from 1982. Bornstein got the idea of getting some extra mileage out of the prolific work of media artists like Nagel—“a cross between Roy Lichtenstein and Leonardo da Vinci”—by selling limited-edition silkscreen prints of their work as affordable luxury, somewhere in between art and furniture. They served a practical use as well. From the Los Angeles Times:

The limited editions, priced at about $35, spawned a new species of collector. They may not have known art, but they knew what they liked when they saw that it matched their faux-Deco furnishings. And it didn’t hurt that, say, a mauve and magenta model drawing (in a chrome or black lacquer frame) easily doubled as a coke-snorting surface in the drug’s heyday.

The original paintings, meanwhile, were free to go on display in Bornstein’s gallery. I doubt that it was Nagel, for example, who secured the Borateem laundry detergent gig or the role of art director for a televised David Copperfield special. (In his austere style, the magician comes out looking more like Leonard Cohen.) 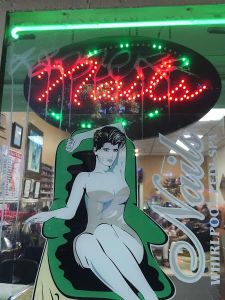 Now a quaint relic of strip malls, the raven-haired Nagel Woman clutching a rose above the word “NAILS” looks like the oblivious self-image of youth. It conjures a bygone world of angelic women with perfect blank skin, goddesses who gossiped on rotary phones—the kind our current president sought to link himself to throughout the decade. The quality of these vernacular portraits varies widely. Nagel peered into his models’ souls and reconstructed faces to convey the essence with a minimum amount of overt effort in his fine and elegant black line. What remains of the exhausted original is the glam shot pose and some vague sense that in this establishment one is prepared for public consumption. Perhaps all that’s left is the expectation of being seen.

There are still questions to be asked about Nagel and his work, small mysteries that remain. To what extent, for example, did his experience with the 101st Airborne Division in Vietnam (motto: “Rendezvous With Destiny”) influence his visual style and artistic outlook? How did the Nagel ladies of the ‘70s transform into the aggressively coifed Dynasty protagonists of the ’80s? What did he really think of men’s magazines like Playboy that paid him to populate the fantasies they peddled with women on demand? The ultimate question—what he would have done had he lived—will forever remain tantalizingly open. Perhaps his most lasting and ambivalent achievement, as one can sense from the modest selection of his work in 1989’s Nagel: The Art of Patrick Nagel (with a foreword by Elena G. Millie), was to further muddle the distinction between commercial and fine art—much like the bombastic decade with which we associate him today.

Daniel Elkind is a writer and translator living in San Francisco.

2 thoughts on “Neon Babylon: The Posthumous Career and Strange Afterlife of Patrick Nagel”