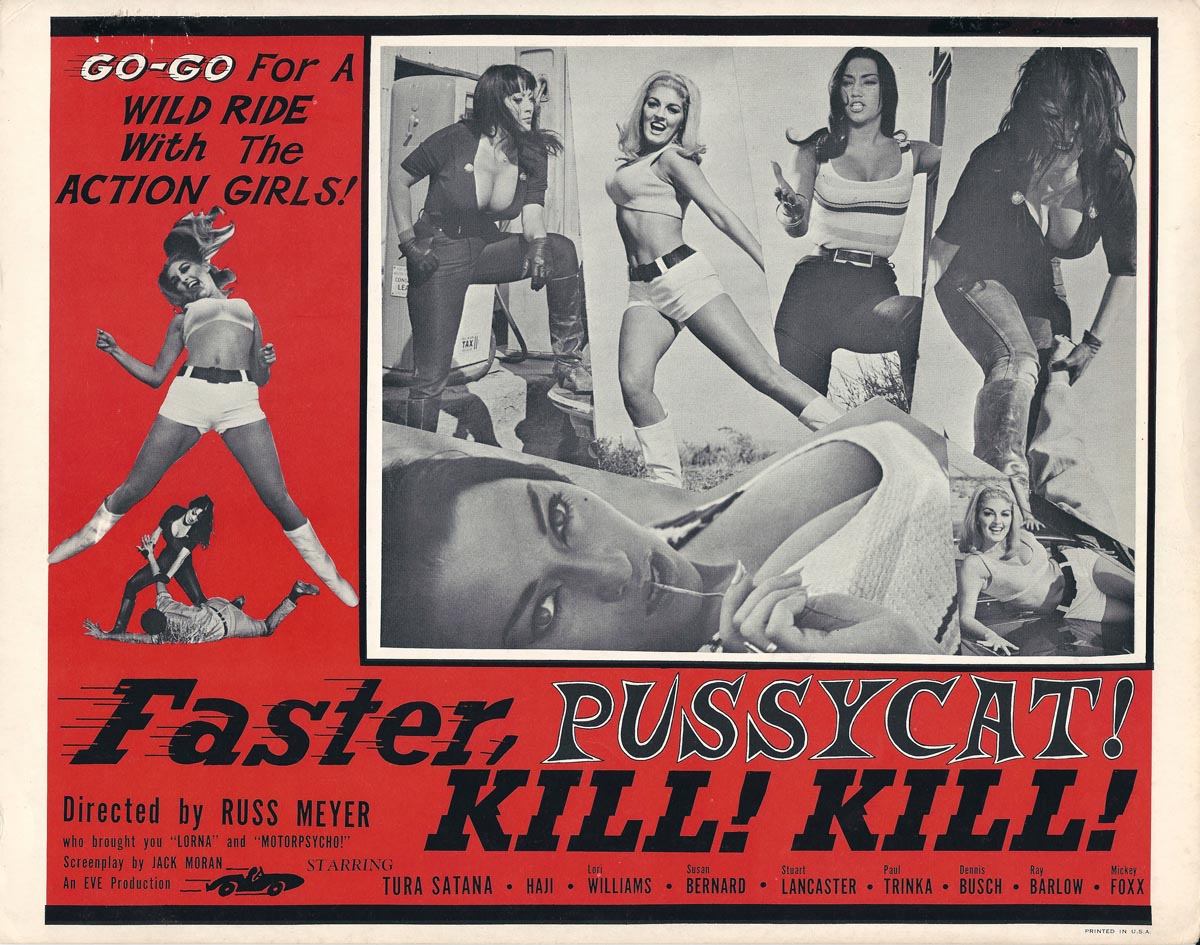 It’s easy to spot an exploitation film by the cover of the poster or DVD. Maybe more so than any other type of art, you can judge it by its cover: a woman, often barely dressed, holding some kind of weapon. Think Pam Grier on the cover of Coffy or Foxy Brown. Even contemporary grindhouse fare like Planet Terror embraces this tradition, with a machine-gun-legged Rose McGowan among the most immediately recognizable images from the film. That’s because exploitation films always know what they’re selling. That’s where the name comes from; there’s something in these films—normally sex and violence—that is being exploited in order to lure an audience. And that’s where Russ Meyer comes in, the filmmaker whose Faster, Pussycat! Kill! Kill! (1965) takes everything about the exploitation genre and ramps it up to an eleven. It’s a strange film that at once knows the genre’s problems and is willing to embrace them.

In the film’s poster, true to form, instead of one woman, there’s two, and the angle of the camera seems designed entirely to highlight Varla’s (Tura Satana) chest. She’s thrown a man to the ground, and there are two cars, engines roaring, behind her. In many ways, it’s the perfect crystallization of the film itself: women, breasts, violence, fast cars. This excess is a “come hither” moment for exploitation audiences, taking everything that they love and blowing it up to extremes. That’s what makes Pussycat so compelling, the strange combination of exploitation and the reverence with which it treats its objects, like a piece of lurid pop art, amplifying and magnifying the tastes of the seediest corners of grindhouse cinema.

One of the ways in which Pussycat challenges the nature of exploitation is by approaching these common tropes—oversexed and ultraviolent women—with a kind of self-awareness, looking at the genre with a nod and a wink. This is made clear from the very beginning of the film, and the way it uses voiceover narration—there’s no other voiceover in the film after this, which is unusual—that beckons the audience by welcoming them to “violence, the word and the act.” The voice goes on to talk about the way in which the “favorite mantle [of violence] still remains sex,” and the “voracious appetite” that the film gives to its leading ladies is something that obviously applies to the audience as well. Pussycat is explicitly designed for an audience that’s hungry for the intersection of sex and violence, for images of powerful women—as long as they’re not too powerful.

The women in Pussycat are fascinating contradictions, something that the film explores through the ways in which the gaze of the camera operates, often changing to enhance different aspects of the characters, from their sexuality to the power they possess over men. As the film begins, Varla and her soon-to-be partners in crime, Billie and Rosie (Lori Williams and Haji), are go-go dancing. The camera loves it, obsesses over and objectifies their bodies, the way that they move, embracing the male gaze at a level that almost feels like parody, even though it’s clearly played straight as can be in every possible way. But beyond just leering at the women, this sequence establishes the fact that they are powerful, with a shot straight out of Film School 101: with the camera low down, looking up at them, it makes the women seem bigger and more prominent—in more ways than one, they fill the screen. As the camera cuts between the dancing women and the borderline rabid men who watch them, bellowing “GO, GO, GO,” it becomes clear that this is, for better or worse, a film about women—about the power they can exert, about the way that they’re looked at. The opening voiceover offers a warning about the kind of women capable of violence, and it’s clearly aimed at men, with examples like “your secretary, your doctor’s receptionist, or a dancer in a go-go club.” It’s power through the lens of female characters, but clearly designed for the consumption of men, the great contradiction that defines the gaze of Pussycat, and much of the other exploitation fare of the era.

The women are placed among a landscape of things that define American masculinity, and the object most rooted in this is a fast car. Driving, racing, and time trials animate much of the drama and narrative of the film. Varla, Billie, and Rosie race through the California desert; they play high speed games of chicken with one another, and the film climaxes in a chase sequence that takes place both on foot and on four wheels. The three women are placed in a position normally associated with masculinity, which is what makes them such fetishistic objects of male wish fulfilment. The camera never lets the audience forget about the assets of these women, but they’re also shown to be “one of the guys” in the way that they drive, fight, and flirt. They can—up to a point—hold their own against the men, and there’s often a kind of role reversal in terms of gender.

In action films, with the James Bond franchise being a prime example, it’s the men who are good drivers and use women purely for sex. But in Pussycat, the women do that, with Varla’s attempted seduction of Kirk, a man she’s hoping will lead her to some money that’s been stashed away. There’s something striking about the way in which, in the moment, Pussycat engages in this role reversal without any asterisk or caveat, simply allowing the women to be powerful and sexual on their own terms. This understanding of how sexuality works on screen comes through in one of the most common exploitation tropes—the catfight, which occurs early on in the film. Billie and Rosie fight each other, their shirts get wet, and it’s all set to a strange, almost dissonant jazz score that undercuts the sexploitation angle of the scene. If the score had been different, then it would seem lifted directly out of porn.

This strange combination of a kind of female empowerment (one built on having the characters embody ideas of strength that are typically associated with maleness and masculinity) and exploitation fare is what makes Pussycat a unique, more aesthetically curious film than a lot of its contemporaries. And some of these images: the cars racing across the desert, Billie and Rosie in the water after a catfight, are reminiscent of pieces of perverted pop art. Pop art as a movement was all about taking the lowbrow and mass-produced elements of American culture, from Warhol’s soup cans to Lichtenstein’s comic strips, and elevating. This relationship between commerce, mass-production, and artistic merit is something that is rooted in a uniquely American tradition; Jasper Johns even reproduced the American flag itself. All you need to turn stills from Pussycat into a Lichtenstein print are some kitschy captions and speech bubbles.

Meyer’s relationship to exploitation film is a lot like the relationship that pop art has with capitalism. They’re both at once slyly aware of what the systems they exist in are doing, and they are either satirizing it (the dissonant jazz score over the catfight highlights the absurdity of the trope) or embracing it in all of its ugliness. The difference, sometimes, is almost impossible to distinguish. It’s easy to imagine Varla, for instance, even at her lowest point, aping Lichtenstein’s famous Drowning Girl. The original contains the thought bubble “I don’t care! I’d rather sink — than call Brad for help!”, and while the words don’t appear in Pussycat, Varla might have said exactly this, replacing Brad’s name with Kirk’s. The film is even willing to lampoon the misogyny that defines so many responses to independent and powerful women, notably when the Old Man whose family the dancers ingratiate themselves with in the hopes of finding money says:

Women! They let ’em vote, smoke and drive—even put ’em in pants! And what happens? A Democrat for president! A bunch of smoke up your chimney! Russian roulette on the highways! Can’t even tell brother from sister, unless you meet ’em up close.

This line highlights the biggest problem with Pussycat’s relationship to the grindhouse: while it’s more than willing to show these women being sexual, strong, and violent, it always reins them in when the male characters get too uncomfortable, a response that typifies a kind of masculinity that both objectifies, and is afraid of, powerful women. The film makes them monstrous, in a way—they always exist in counterpoint to the sweet and innocent Linda, who they’ve kidnapped and who offers a different kind of womanhood, one more palatable to male audiences once the credits have rolled. It’s no wonder that Varla’s demise in the climactic finale—in a moment of what feels like purposeful irony, she’s run over by a truck driven by Linda—that she gets described as “nothing human” by Kirk, before he and Linda drive off into the sunset in the very truck that she used to kill Varla.

In a way, the end of Pussycat is the only way that such a distinctly American exploitation film could end: after a whirlwind tour of tropes associated with male action heroes, set against a uniquely American desert landscape, normalcy returns. The power (and gender) dynamics of the real world—where your secretary or doctor’s receptionist are unlikely to kidnap your girlfriend, or try to seduce and rob you—are reinforced by the violent end that the subversive women meet. In contrast to this, the sweet Linda and righteous Kirk ride off into the sunset together to begin a quote-unquote normal relationship. Exploitation cinema reached its heights in the early 1970s, and while the template of Pussycat is there, the films that came in its wake were less willing to embrace the larger-than-life aspects of their characters and stories. Pussycat remains unique for the ways in which it refuses to look away from the complicated relationship that its characters have with the gaze of both the camera and the audience. These women are simultaneously manipulating that gaze and being manipulated by it, something that makes Pussycat the kind of gaudy pop art that you could only ever find on 42nd Street.

Sam Moore‘s writing on queerness, politics, and genre fiction in art has been published by the Los Angeles Review of Books, Little White Lies, Hyperallergic, and other places. Their poetry and experimental essays have been published in print and online, most recently in the Brixton Review of Books. If their writing didn’t already give it away, they’re into weird stuff.