I came to Douglas Coupland’s novel Generation X: Tales for an Accelerated Culture, thirty years after its 1991 publication date, expecting sharp sociocultural observation and maybe some economic critique. After all, Coupland, who said that his generation was “sick of stupid labels,” inadvertently coined the self-effacing generational moniker under which my cohort has labored.

But Generation X is something stranger than a novel of social observation. It is a scrappy, almost zinelike collage of images, marginal text, and patchwork narratives, making it feel like a back issue of a magazine that never quite existed. It’s full of incisive nouvelle slang: “McJob: A low-pay, low-prestige, low-dignity, low-benefit, no-future job in the service sector. Frequently considered a satisfying career choice by people who have never held one.” Coupland provides all the expected pleasures: lostness, drifting, downward mobility, a surfeit of irony and anti-politics; and over it all the fading shadow of global thermonuclear war, which still haunts the imaginations of this last generation of Cold War kids.

Generation X is about three friends, Andy, Dagmar (a man), and Claire. Their platonic cuddling and aggressively retro aesthetic create an odd, lightly ironized, closety vibe. A novelist more concerned with our moral life would explain this atmosphere: perhaps through parental divorce, which played such a huge role in the national psyche of the ’80s and ’90s. Divorce defines the cultural landscape of Generation X. As one of the marginal comics by Paul Rivoche puts it: “Don’t worry, mother… If the marriage doesn’t work out, we can always get divorced.” The atmosphere of divorce, its ever present possibility, shapes these characters’ contingent and uncommitted life—but it doesn’t define their psychological backgrounds. Unlike in much Gen X fiction (including McInerney’s Story of My Life and The Secret History), our hero’s parents are still married.

In 2019, the divorce rate hit a record low, as did the marriage rate and the childbirth rate. Divorce and the experiences of “children of divorce,” which shaped so many books and movies in the 1980s and 1990s, play a much smaller role in our cultural landscape now that nobody’s getting married or having children in the first place. This shift has not exactly reduced the ambient level of instability and precarity. The covert intensity with which Andy and his friends cling to one another, the mingled hope and guardedness in their promise-free love, is if anything even more striking in our current relationship moonscape.

The place of gay people and gay longings has shifted in a far more significant way since 1991, and here Generation X does feel even more retro than it’s trying to be. But although there are clues to the narrator’s sexuality for those who would like clues (it’s no coincidence that Claire’s awful boyfriend calls him “Candy”), Coupland doesn’t pathologize the unspoken quality of Andy’s sexual longings. Andy’s reliance on dreams and hints suggests an extended adolescence; that’s part of the experience of the closet, but it’s also something he can share with his friends, opening him to them as well as limiting him.

Andy and his friends are bracingly aware that they won’t do as well as their parents. I remember answering the phone when I was in middle school and finding myself in a poll: “Do you expect to have the same level of financial security as your parents, or greater, or less?” I said, “Less,” of course, with a suppressed duh. Doesn’t everyone expect less? And yet Andy and his friends live in their own bungalows, right next to one another. (Andy’s from Portland but fled to tend bar in Palm Springs with Dag; Claire sells Chanel at a luxury department store.) They don’t need housemates. They have pets! Who do you know, who isn’t rich, who can afford their own rental and a pet? There’s a chapter in here titled “Quit Your Job.” I enjoyed that slogan, but thirty years on, in the middle of the gig pandemic, I also thought, Gosh, remember when people had “jobs”? Andy and his friends come from the middle class or higher, true; they’re also part of a generation that could feel the floor tilting under them—even if they hadn’t yet slid all the way off. They’re able to choose between the service industry and a soul-crushing job with health benefits. We should all be so lucky! 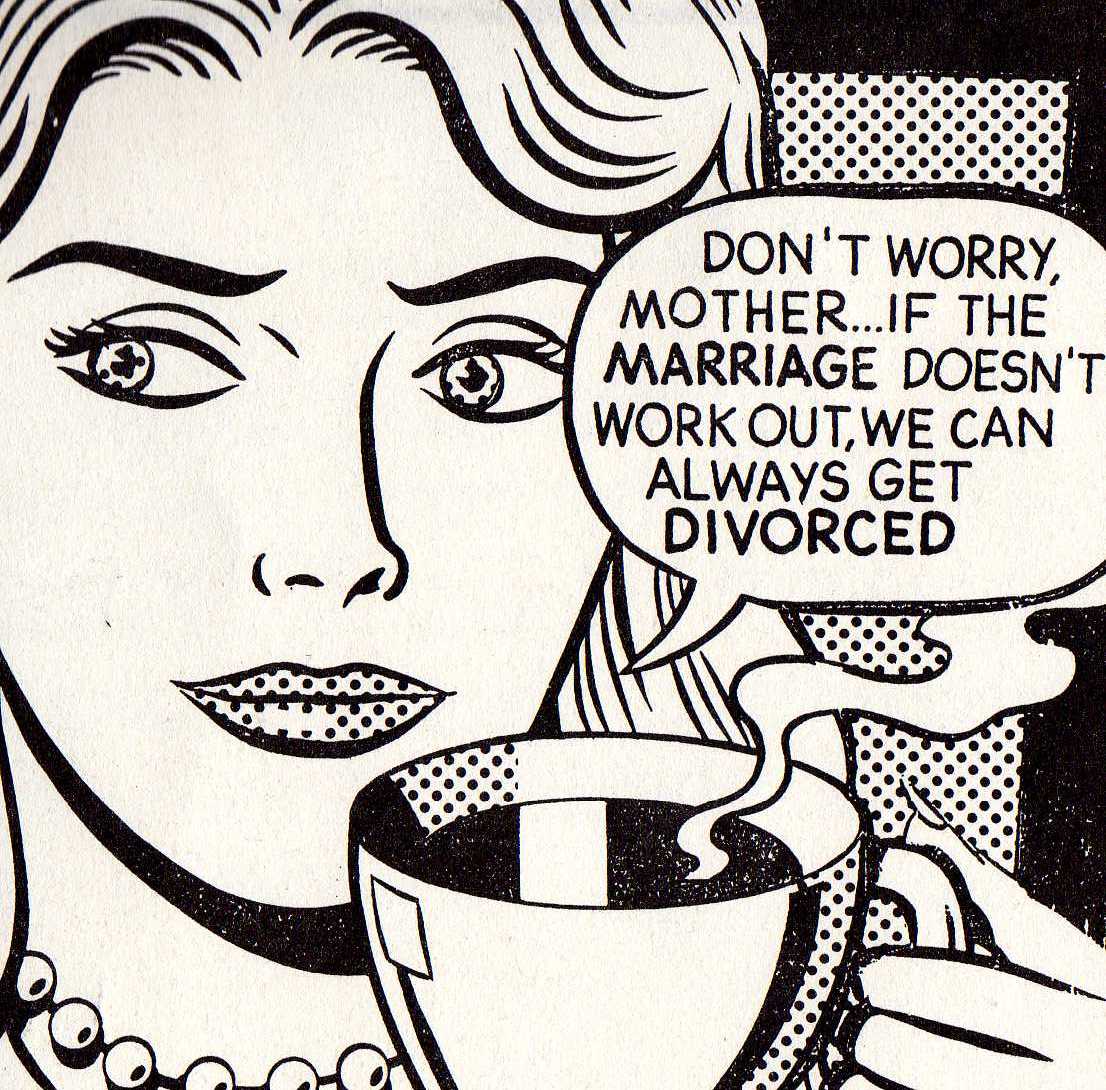 The most powerful image of the precarity of these characters is not their withdrawal from romance or their bartending jobs. It’s nuclear war. When the novel was released, in March 1991, the Soviet Union still existed. It’s set in 1990, the year after the Berlin Wall fell. The old game of brinksmanship was rapidly changing its rules, and nobody knew how it would end. Dag is obsessed with the mushroom cloud; he accidentally covers Claire’s bungalow with radioactive rocks; he closes one of his many “end of the world stories” with “the silent rush of hot wind, like the opening of a trillion oven doors that you’ve been imagining since you were six.” Nuclear war is an ever present memento mori: a reminder that you’re a target, that political forces you can’t hope to affect may turn you and everybody you know into glass.

But nuclear war also offers the promise of a totally different future. Maybe things won’t just keep going the way they have been. Maybe apocalypse will bring revelation. Dag’s vision of the mushroom cloud ends in communion and a kind of confession. His nuclear fantasies express deep-rooted fears, but also a longing for the ecstatic shattering of the self. Nuclear war would not just crack open the self-protective carapace of irony: the persona. It would not only be the ultimate shared experience in an atomized and alienated world (“We Will All Go Together When We Go,” as Tom Lehrer reminds us). It also represents the white-hot moment when loss becomes total. And it’s in this loss, a kind of mutually-assured asceticism, that Coupland’s characters hope to discover some form of transcendence. That’s vague, and it’s vague in the novel; maybe it has to be vague, because, having left the ornament and doctrine of religions behind, Andy and Dag and Claire have little idea what other shape transcendence might take.

We see this in their stories. One of the unexpected delights of Generation X is the way it turns the postmodern obsession with narratology into a game. The three friends constantly tell each other “bedtime stories,” with various rules and conventions. This is part of their self-protective irony (it’s not me, it’s not my heart). It’s part of the zine aesthetic of the novel, and it fits the characters’ directionless lives; no individual plotline can be sustained for very long. But Coupland makes this shared storytelling feel loving and genuinely communal. It’s a sincere statement that they may view their own lives as pointless and meaningless, but they want to hear their friends’ stories. There’s an uncynical lightness to the storytelling, which lets these characters reveal their secret desires as if at a slumber party, flashlights under their chins.

And so we get Claire’s fairy tale of the spaceman who persuades a girl stuck on the backwater planet of “Texlahoma” to give her life so he can get back to Earth. He’ll revive her, he promises. Her sisters know it’s a lie. But they still let her go to her ecstatic death: “And together the two sisters sat into the night, silhouetted by the luminescing earth, having a contest with each other to see who could swing their swing the highest.” This is a tale of deadly romance, appropriate for the sex-kills era. It’s a tale of economic marginality. But it’s also suffused with longing for the unknown, even if the journey into that black, star-studded expanse will kill you. And it’s a hint that death, at least symbolic death, may be necessary in order to touch the stars.

Claire is also the one who tells the most direct parable of asceticism. She tells this story soon after her sketchy grifter friend, nicknamed Elvissa, runs off to be “a gardener at a nunnery.” Dag says, “I don’t buy it”; but Claire retorts, “It’s not something you buy.” Generation X, in Generation X, shelters neither in the certainties of the ’60s revolt nor in the post-Great Recession certainties of the millennials, but in irony and delay. Elvissa’s flight suggests an unsheltered alternative. Not the convent—that’s too much certainty or the wrong kind—but something convent-like: some ascesis, some mystery, some intelligible loss and unintelligible gain.

Right after Elvissa leaves, Claire tells a story called “Leave Your Body,” about “this poor little rich girl named Linda.” Linda’s parents break up when she’s a kid; she becomes a “charmed but targetless” woman, restless and unhappy. And then in the Himalayas she learns about “a religious sect of monks and nuns… who had achieved a state of saintliness—ecstasy—release.” Linda accepts the sect’s strict rules (though it’s important to the generational portrait that they’re not the rules of kashrut or the catechism) and begins seven years of fasting and meditation. She misunderstands. She makes what is literally a fatal error, due to her ignorance of the Himalayan discipline. And yet that doesn’t mean she fails. The ultra-American’s quest ends not in humiliation but in mystery: even in her folly, she found the doorway.

This is Coupland’s attitude toward all his characters’ longings. He lavishes attention on their bright and curlicued foolishness, but he never holds their hopes in contempt. He suggests that they may someday find whatever it is they’re seeking, even if they never understand it. This is an unfinished book; it defined a generation by our unfinishedness.

One thought on “Between Mushroom Cloud and Monastery: Douglas Coupland’s ‘Generation X: Tales for an Accelerated Culture’”