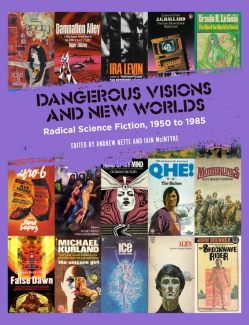 Disclosure: This collection includes an essay by Kelly Roberts, editor-in-chief of We Are the Mutants.

In troubled times, we must be grateful for every touch of the ridiculous. And so let’s raise a glass to psychologist and pop scientist Steven Pinker, who in his most recent book burbles forth: “Rationality is uncool.” Pinker pledges fealty to Reason, the chaste goddess, even though he “cannot argue that reason is dope, phat, chill, fly, sick, or da bomb.” This delightful complaint evokes a vanished era in which we all were just vibing on reason, knowledge, hexagons and vaccines and supercolliders and, I don’t know, eugenics. But this timeline, if it ever existed, ended long ago. For the authors whose works are explored in PM Press’s new collection, Dangerous Visions and New Worlds: Radical Science Fiction, 1950 to 1985, cool rationality was the old religion — and they were the acolytes of the strange new gods who displaced it.

Dangerous Visions is the third in a series, edited by Andrew Nette and Iain McIntyre, exploring the radical elements in pulp and genre publishing of the Cold War era. (We Are the Mutants has reviewed the first volume, on postwar youth culture, and the second, on revolution and the 1960s counterculture.) Like the first two installments, this one combines short essays with plentiful examples of weird, enticing cover art — such as a 1955 cover for 1984 that looks like nothing so much as a juvenile-delinquency pulp. The book is punctuated with little round-ups, less like essays and more like annotated lists of sci-fi on subjects like nuclear war, drugs, or animals, which show how cover illustrators could depict similar themes as dream or nightmare, action-adventure or inner journey. The “dystopias” list, for example, includes a threatening cover for Stephen King’s The Long Walk (1979) and an eerily seductive one for Mary Vigliante’s The Colony (also 1979).

The book begins with the opposing open letters published in 1968 in Galaxy Science Fiction, one supporting the war in Vietnam and the other protesting it. This contrast offers an obvious political gloss on the word “radical” in the book’s subtitle: “Radical” means left-wing politics; it means the antiwar stance of Samuel R. Delany, Philip K. Dick, Ursula K. Le Guin, and Kate Wilhelm set against the conservatism of the pro-war Marion Zimmer Bradley, L. Sprague de Camp, Robert A. Heinlein, and Larry Niven. But an early mention of the transition from the term “science fiction” to “speculative fiction” is a more accurate guide to the kind of radicalism Dangerous Visions celebrates. Both Heinlein and the pro-war R.A. Lafferty get thoughtful essays in this volume, suggesting that they, too, were in some way radical visionaries.

There’s little explicit effort to tie the works together or nail down what makes something radical, dangerous, or new. It’s a wise choice that allows the essayists to avoid fixed narratives and Procrustean politics. The new world is a place where a new kind of person lives — although many would argue that this new and dangerous person was always the only kind of person around. The old SF hero was that rational man you used to hear so much about: the imagined actor in liberal political philosophy, the person without dependents or dependencies, who confronted the stars with reason, self-control, and a spirit of adventure. He travels, as the introduction puts it, “from the suburbs to the stars.” The old guard’s heroes were white, even when they were green. The old SF hero might die, but he’d never worry about getting pregnant. Mind and body were manageable; desires were reasonable, inspiring, and above all intelligible, both to the hero himself and to the reader. Whether this is a fair description of the old-school hero, I can’t say. I only like this kind of guy when he’s played by William Shatner — in a book, I just can’t see the appeal. I can say that the works explored in the PM Press collection are rebelling against this hero. These books are populated by mystics and criminals, artists and threatened children, even animals and creatures who are some blend of human and Other. The political apparatus of the state does not enable constructive action; it provokes fear or anger. In these books knowledge is less like an equation and more like a hallucination.

Speaking of Samuel R. Delany, Dangerous Visions avoids the more thoroughly-trampled pathways in his work in favor of a 1979 memoir of his brief stint in a commune called Heavenly Breakfast. Daniel Shank Cruz highlights not only novel sexual arrangements (“they all get gonorrhea […] because intra-commune sexual encounters are commonplace”) but the group’s economic strategy of drug dealing, and its belief — perhaps even more touching and necessary now than then — “that people have value aside from their financial status, and that it is worth living with someone… even if they are unable to contribute their ‘fair share.’” “It is inaccurate to say that its members shared funds,” Cruz writes, “because many of them had no funds to share, but they all shared in the work of caring for one another.” The whole thing only lasted one winter, which the book’s subtitle calls The Winter of Love. Cruz argues that the winter with Heavenly Breakfast taught Delany that he could live in a fully new way, and infused his later work with communal values and greater “sexual openness.” Delany always insisted that the polymorphic sexual community, no matter how perverse, can offer a postsecondary education in love. Sex is his means of reasoning, not his means of getting beyond rational thought; it’s his language, not his apophatic and apocalyptic self-immolation.

And so he is the happy radical, whereas J.G. Ballard and Philip K. Dick represent more lacerating visions. Erica L. Satifka’s essay suggests that Dick’s work “reflects the at times bizarre course of his own relatively short life more than any radical political beliefs” — but if you’re literally approached by the FBI to spy on your fellow students, it’s not your life that’s weird, it’s your times. Dick lived out many of his age’s forms of altered consciousness, from psychotherapy to amphetamines; his experience with alternative homemaking was also harder than Delany’s, as he went through five divorces and found himself “invit[ing] hippies and/or junkies to live with him on a rotating basis,” which is sweet but not nostalgia fodder. All this touched his work with a poignant separation between the self and some true hidden knowledge. Ballard, by contrast, led a stable domestic life, deranged only by the surrounding culture. He expressed this derangement in funhouse-mirror worlds, dreamscapes and projections, where the shock of the real could only be attained through technology-enabled violence. And these worlds were not future but present, because, as Ballard said in the 1960s, “We live inside an enormous novel…The fiction is already there. The writer’s task is to invent the reality.” The more your world is manmade, shaped by technology and terraforming, the more you live in dreams and fetishes: the substance of our inner lives. (I’m sitting in my bedroom and I can’t see a single object I know how to make.) Delany probes wounds and bruises with his tongue and likes the taste; Ballard gets a mouthful of blood and chromium menace, the taste of a self-discovery that’s also a self-loss. Delany winds up a contented eminence grise, replete with memory like a bee with honey; Dick possibly broke into his own house, blocked out the memories, went on a paranoid tear against fellow SF luminary Stanislaw Lem, and a year later entered rehab after a suicide attempt. I love Delany’s work but his luck is too good — it veils some of the harder truths.

As with any collection, Dangerous Visions is uneven, both in the quality of its own essays and (more intentionally) in that of the works it surveys. The experiments in rebellion and discovery conducted by the books’ motley heroes (and by the authors) brought results that were sometimes exhilarating, sometimes disturbing, and sometimes both at once. An early essay on “sextrapolation” includes a lot of taboo-breaking that just seems silly or gross. The best I can say for the quotes here from Bug Jack Barron is that without them maybe we wouldn’t have actually good stories like “Aye, and Gomorrah…,” in which sex is less of a Sharper Image store and more of a mystery play. Meanwhile, a few essays in Dangerous Visions show individual style, like Nick Mamatas’s feverish, slightly aggro tribute to R.A. Lafferty, but the entire first column of Maitland McDonagh’s essay on gay adult SF is bland boilerplate. Stronger editing would have allowed McDonagh’s camp humor to emerge earlier and with less padding. Scott Adlerberg offers an essay about the radical SF of Arkady and Boris Strugatsky, authors of Roadside Picnic (later adapted by Andrei Tarkovsky as the 1979 film Stalker). The critical assessment emerges through biographical data about the grinding, increasing conflict between the brothers and the Soviet censorship apparatus: the Strugatskys seem attuned to fun, adventure, and playful anti-bureaucratic humor in the Douglas Adams vein, but the censorship and fear of a totalitarian system, including a harrowing encounter with the KGB, led them into sharper satire and more hallucinatory blurs of dream and reality. But Michael A. Gonzales’s similarly biography-focused essay on Octavia Butler avoids any real critical engagement with her work’s themes. Her mentors within the genre are listed, which is useful as part of the collection’s overall portrayal of radical SF as a community relying on particular institutions (New Worlds magazine, the Women’s Press) and central figures (in Butler’s case, the author and writing teacher Harlan Ellison). No effort is made, though, to place Butler in dialogue with larger movements, from Afrofuturism to Afro-pessimism; there’s no real exploration of her work’s vision of the body’s metamorphoses, her portrayals of youth and inheritance, her prose style — the texture of her work dissolves and she’s left as a generic Black Woman Pioneer.

Dangerous Visions, as its understanding of “radical” SF emerges, suggests unexpected links between authors: Mamatas’s essay on the gonzo Catholicism of R.A. Lafferty finds a home beside Iain McIntyre’s homage to the anti-imperialist mysticism of William Bloom, whose Himalayan action-adventure hero Qhe is a “cosmic [James] Bond.” A late essay by Donna Glee Williams contrasts the visions of anarchism in Ursula K. Le Guin’s The Dispossessed and Robert A. Heinlein’s The Moon Is a Harsh Mistress. These two novels suggest possible syntheses between old and new. They both offer metaphysics and political reasoning, while still being recognizably “radical”: both take place in criminalized communities and depict alternatives to the liberal state.

The anthology opens by noting that the radicalism of its authors didn’t vanish, but disseminated itself throughout mainstream SF, suggesting a longing for some synthesis; some recognition of the poignant beauty of human reason and the quest for knowledge, alongside a taut awareness of reason’s propensity to serve violence; some hope for new communal forms of life, new mysticisms in the face of new apocalypses.

4 thoughts on “The Violence of Reason: ‘Dangerous Visions and New Worlds: Radical Science Fiction, 1950 to 1985’”